These displays, featuring mannequins posed as if they are being attacked by an invisible assailant, could be seen in the windows at Barneys New York this week: 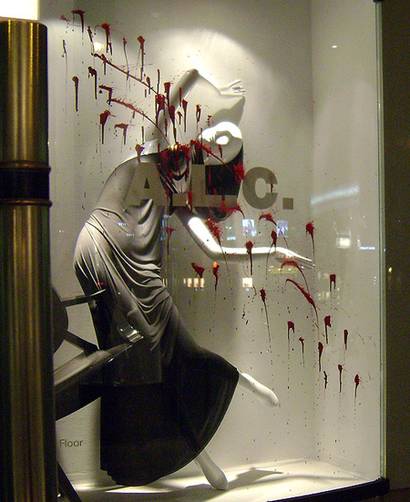 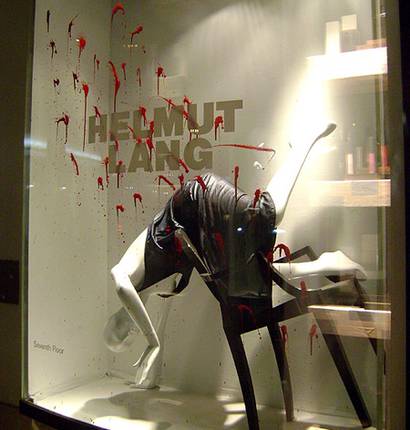 They were disassembled when shoppers complained.

You really have to wonder why anyone would find this acceptable?

I can't even think of an artistic message here, only the desire to be provocative.

I meant that first sentence as: "I really can't think of a reason why anyone would find this acceptable."

And this is supposed to sell clothes how? All I think is that it tells the potential shopper "Step in here and meet our resident ax murderer!"

It's not just the theme of violence that's messy, but the presentation of these mannequins. Terrible angles and a peculiar spacial relationship with those chairs makes it hard to know where the viewer is supposed to be looking.

And the blood? It distracts from the very product it's presumably trying to sell.

I'm sure the designer was trying to have some innocent fun, but this is just a lesson in how the erroneous belief that edginess can make-up for a poor display.

i agree with folks being upset over this one. a friend works for Barney's and was able to explain the motivation. the idea was "these are clothes to be caught dead in" (you know countering the "i wouldn't be caught dead in that" saying). however, as mentioned, it was taken down quickly.

What, you guys haven't seen depictions of hipster violence before?

Not trying to be contrarian for its own sake, but despite my all-around disapproval of violence against women (and men) I really like what I can see of the window display.

And I have nothing at all against violence toward mannequins. Dressed like that, they were clearly asking for it.

Seriously, though. Would these displays have been offensive if they'd been in an art gallery rather than a shop window? My guess is that most people would stroke their chins, debate what it has to say about the status of women and fashion/body image and consumerism (like this blog does so much), have a little chuckle, and come away thinking it was way too pat and obvious.

"Would these displays have been offensive if they’d been in an art gallery rather than a shop window?"

When looking at something sociologically, at least to me, it seems useless to say, "But, what if we take this out of context." If you change the context of course you change the meaning, context gives meaning.

It would be odd for a department store to be questioning fashion culture with a window display. It's kind of like asking what we would think of a normal window display in an art gallery--nothing, because a window display has a different intention than an art display. The point is, they were using depictions of violence against women to sell clothes.

Barney’s, This is Completely Unacceptable « The Gender Blender Blog — July 26, 2009

[...] Completely Unacceptable 27 07 2009 File this under WTF?!!  What were you thinking?!! Via Sociological Images, Barney’s New York had this window display up this past week, but took it down when shoppers [...]

Re: "The point is, they were using depictions of violence against women to sell clothes."

I'm not entirely sure about this. Once again, the depiction was of cartoon violence against a faceless, hairless mannequin in a dress. Because I don't relate very personally to male mannequins, I assume the same is true for women. But judging by the controversy, I suppose plenty of people feel differently. I, too, would've been uncomfortable if there had been, say, a perpetrator-mannequin in male clothing, or a toy gun.

Sure, but let's look more closely at the context here. This is not a display in a shopping mall in Topeka. Rather, it's a prominent storefront in the advertising capital of the world, set among an urban crowd for whom the line between art and commerce is broken and blurred in new ways every generation. The art world in New York is even more hyper-competitive and commercial than the fashion world, and plenty of galleries have shop windows as well. If the provocative thing in question happens to be the product, rather than a presentation including the product, is the context really all that different?

After what Anon said, I certainly wouldn't rush to defend the window display as an intentional comment on fashion culture. But as an artist, it always amazes me how much society demands confrontational, ironic, powerful, and brutal art - often at staggering prices - while turning extremely conservative and reactionary the moment we feel like someone's trying to sell us something.

Of course, we're trained to steel ourselves against art, while we let advertising catch us with our guard down and find our insecurities. But shouldn't it be the other way around?

"Because I don’t relate very personally to male mannequins, I assume the same is true for women. "

I wouldn't assume that at all. Mannequins represent current societal ideals and plenty of women are aware of the currnet "style" for mannequins, i.e., whether the mannequins have pronounced busts or (almost never) butts.

You've had the luxury of spending your life as a not very perceptive male.

@Reader re Andrew's “Because I don’t relate very personally to male mannequins, I assume the same is true for women.”

"You’ve had the luxury of spending your life as a not very perceptive male."

You people don't seem to understand what the word 'unacceptable' means.

Violence against women or anyone for that matter is completely unacceptable, but depictions of violence are considered perfectly acceptable in our society and indeed form a large portion of our mainstream entertainment.

Some mannequins falling over is a far cry from the excesses of Saw IV. As a window display it's a bit disturbing and probably counterproductive, but 'disturbing' isn't the same thing as 'unacceptable'.

Wow... these images would be upsetting regardless of the gender of the mannqeuin.

I think it's fair to say they are unacceptable. If people who enjoy escaping into a violent action or horror movie choose to watch such films, that's acceeptable for me. But showing these images in a window display onto a public street where all kinds of people, including children, have to walk by and try to feel safe... not acceptable.

"You’ve had the luxury of spending your life as a not very perceptive male."

I've had the privilege afforded spending my life as a male - whatever privilege is left over from being queer black immigrant, I suppose. But if you'd like to attack my perception or intelligence, take the time to back it up. Do you realize how hypocritical and crude it is to enter a debate about whether an inanimate object is "offensive" or "unacceptable" by making a deliberately offensive and unacceptable remark to a real person?

http://www.youtube.com/watch?v=PIEtrT2STrQ In this very stupid video clip, a slightly more lifelike icon of beauty ideals and female style is ostensibly stripped naked, tortured, and incinerated in sexual poses. The same one - we all know her - met an even worse end in a famous Soundgarden video. Women, do you relate to her plight, feel her pain, extrapolate that she might in fact stand in for very real women and feel unsafe?

I ask in earnest; I grew up in a time when mutilating Barbies and mannequins in creative ways was a normal theme for feminist art students. It wouldn't have occurred to me that the same audience that once ho-hummed a chandelier of Barbie heads or a ten-foot vagina made of chainsaws would one day gasp in horror when a glorified clothes-hanger gets shot on Madison Avenue.

I would love to live in a world where more women have it easy enough to be worried about this silly stuff.

Beyond stupid. I mean, it has no artistic merit whatever, it's just saying "Hey beating up chicks is hot!", seriously..such stupidity boggles me.

O MY GOD!
....
That dress is perfect for Aunt Justine's wedding!

Yeah, ok, the above is definitely NOT what I was thinking when I saw these pictures.

I agree with you in many ways. These forms are a little cold-looking when it comes to connecting with them. When I saw the pictures I didn't think "that could be me or my best friend." The idea of the display is interesting and edgy but I think it simply fails at it's job because the dress is the least interesting thing about it.

I don't know if it's something I would like to be forced to see while walking down the street, but if I were going to see art, seeing something like this would make me think. Displays and ads are around to sell a product and unfortunately I think these displays may only sell glamorized violence to the young person who doesn't stop to think it through.

As a marketing tool? Kind of lame.

(And that Barbie video was disgusting and terrifying to me, but thank you for posting it. It did illustrate your point well.)

Violence against women as entertainment. Again.

We have a little problem in the US, with women getting shot, stabbed, beaten and otherwise murdered by men. It happens a lot. I find it offensive when it's used as entertainment. Yes: I feel endangered, I feel menaced, when my worst nightmares are traded as a commodity.

What's next? Why not a black mannequin hanging from a tree—but in a really fabulous suit? Or a limp, white male mannequin, lashed to a fence?

your all stupid. this is art. stop crying about it. women are here to entertain men. too bad. get with it. or end up complaining your lives away.