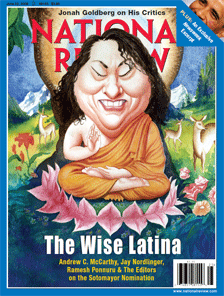 Many commentators have criticized the cover for using racial stereotypes.   They write as if the people at the National Review are ignorant (e.g., can’t tell the different between different races).   But it’s not an accident, it’s a purposefully racist joke.  Of all the commentary I’ve seen so far, Neil Sinhababu said it the most clearly (via):

…the joke actually depends on incongruities between the stereotypes of the nonwhite ethnicities involved. The Buddha-like pose and Asian features are tied to lofty pretensions of sagelike wisdom. And what sort of person is it who’s pretending to be some kind of sage? A Hispanic woman! As if.

The in-joke in this cover is for people who have already internalized a stereotype of Hispanic women as hotheaded and not that bright. Put one of them in the Buddha suit, and if you’ve absorbed the right racist stereotypes, the incongruity is hilarious.

I didn't go through the dozen or so links to previous race-based criticism, but I did look through the first few.

Just curious if this blog has ever dealt with the rampant (and tolerated) race-based criticism of white men in the media?

It's fine to emphasize positive aspects of other races and cultures, such as Sotomayor's latin background. But not at the expense of tearing down others.

Have there been posts on this blog on using "white" as a label to criticize?

There are instances of using whiteness as a point of attack, but I would argue that without the same power backing, it's really not the same thing and arguably isn't "racism" at all. It depends on your definition -- if you define racism or sexism as having societal and historical power behind them, then sure, men can be insulted for being men, or white people for being white, but on the whole in our society they aren't facing the same kinds of oppression.

This just seems to me to be a sorry attempt by the National Review to copy the "satirical" point made by the New Yorker magazine during the 2008 presidential race. The problem is not that this uses racial politics as a point of satire, it's what happens when people just don't "get" the joke.

As an Asian, did I find it funny? Not really. Insulting? Not really. Confusing? Yeah, kinda (and I consider myself well-read). Of course, I don't buy into the stereotype of Latinas being hot-blooded, so that might be the source of my confusion...

If you critically analyze the cultural grounding of these visual stereotypes you may find a common discourse underlying all of the stereotypes referenced in the "here, here,...." list above. Euro-American white-skinned privileged culture, generally of lower class, poor, origins, or aspiring insecure upper middle class origins has been the repository of these images and memes. The negative origin and trajectory of these stereotypes are bound to the cultures and peoples of their origin. It is unfortunate that white skinned Euro-Americans find it difficult to openly verbalize their awareness of the likely source of such stereotypes. Honesty appears to be without virtue among these people.

All I'm pointing out is that the stereotype "white people can't dance" is actually emotionally harmful to some people. More seriously, the constant ridiculing of white men ridiculously overgeneralizes the target group. I'm a white man, but I'm not rich or powerful. How am I supposed to feel when I can't even live up to the stereotypes places on my race and gender?

The point is, it _is_ emotionally harmful to white men. I have an aspiring white man for a neighbor (he's like 7 or 8), and his father told me he asked why people don't seem to like white people.

Wow. That we could come this far as a culture is amazing. Now it's time to find a balance for the pendulum.

Actually, there have been posts on the perception of white peoples as "vanilla," "boring," and "uncool."

As far as I'm concerned, making hurtful comments about someone based on their ancestry is racism, regardless of the context. In aggregate, our society is dominated by white people, and racist against people of color. On the level of interpersonal interaction, I would argue that racism against white people does exist, and that it is problematic.

As a rather bizarre side note, I am white, and I have a somewhat diverse group of friends. By and large, it's my white friends who tease me about being "so white."

Racism, like patriarchy, is a double-edge sword; oppression and hatred make things worse for everyone.

In any even, MASSIVE thread derail!

That cover is so ridiculous. It isn't worthy of analysis, so much as slack-jawed disbelief.

They took a Latina and turned her into a North Indian man with East Asian stereotypical features.

But it's Sotomayor who's racist, amirite?

She called herself a "wise Latina", so they did a cartoon of her as Buddha (not "an Asian", but Buddha). Big deal.

Sometimes this blog is so good, but times like this it is so LAME.

I find the comments from white males very encouraging in that there appears to be a willingness on their part to acknowledge the weight that one class of whites puts on another class of whites through the vehicle of racist behavior imposed on people of color, i.e., not of white skinned European origins. One commenter suggested that "whites dominated American society"(Curvector) and at the same time experienced the ascension of numerous oppressed people to social positions that the same dominant whites physically and psychically denied to oppressed people of color. As one of the oppressed ascenders, I can imagine the conflict and dissonance the "non-dominant" whites felt. People of color have always known, through individual contact and shared situational experiences, that whites were not dominant as individuals. Whites only dominated in the mob, or institutional organizational, sense. It's unfortunate, but those white skinned privileged people who haven't discovered and dissolved their false historical consciousness, will find themselves allied with those dominated people of color whose false historical consciousness demands that whites be dominant in a world where white dominance will be a sign of insanity.

Thanks for using ablist language to voice your dissatisfaction with this post opminded. And look at SarahMC's comment right above yours. Buddha doesn't have slant eyes and buck teeth.

"More seriously, the constant ridiculing of white men ridiculously overgeneralizes the target group. I’m a white man, but I’m not rich or powerful. How am I supposed to feel when I can’t even live up to the stereotypes places on my race and gender?"

make the whole thread about you and your imaginary suffering from racism, of course.

You don't have to be rich or powerful to benefit from being white and male (and straight, and able-bodied, and and and). Just because you aren't rich and powerful does not mean you are not privileged.

@Opminded: She called herself a “wise Latina”, so they did a cartoon of her as Buddha (not “an Asian”, but Buddha). Big deal.

The problem is that Buddha was from India and did not look like a WWII era caricature of general Tojo with slanted eyes and buck teeth at all.

(The image references Buddha's first sermon in the deer park. Curiously enough, two key icons of his iconography are absent: his characteristic topknot hairdo and the long ears that symbolize wisdom)

[...] again, as we argued about the recent Sotomayor cover, maybe the truth is that it’s simply fine to be racist these days as long as it’s [...]