My Rant on “America’s” Recession 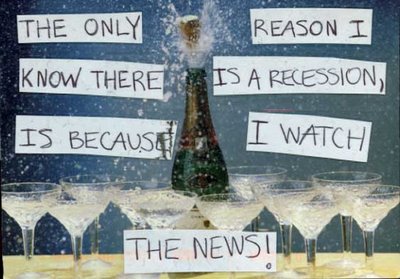 This PostSecret secret offers me an excuse to go on a rant:

Instead of an opportunity to start a national discussion about class, the recession appears to be stimulating a bunch of nationalist, and obfuscatory, rhetoric about our common condition.

If you listen to most media outlets they say that “America” is in recession.  But not everyone in America is feeling the pain of this economic downturn equally.  I, for example, have not lost my job, have not seen my pay cut, have not lost any benefits, and however much 401k money I’ve lost is rather irrelevant as I’m in my 30s and have no need for it right now.  I am not suffering in this economic depression.   In fact, I’m taking a junior sabattical next year and going half pay BY CHOICE.

Further, I keep hearing things like: “This is a great time to buy a house!” and “Stocks are cheap!  You should invest in [insert random company here]!”  (This advice is lost on a person who comes from humble beginnings and is voluntarily going half pay next year, but I digress.)

So, for many people, this economic downturn is kind of fantastic.  Houses are cheap, stocks are cheap, and companies are offering great deals just to stay afloat.  Plenty of people I know who are upper middle and upper class are considering this a great time to invest (see here for an example).  They look forward to ultimately benefitting from this economic disaster.

Lots of other people around me are suffering.  If you’re already poor or working-class, out-of-work, near retirement or retired, struggling under an adjustable rate mortgage, (and I’m sure there are others I’m forgetting), you may be screwed.

So I wish we would stop talking about how “America” is in recession.  This recession is hurting some kinds of people more than others.  On the whole, those people who were underprivileged before the downturn are taking the brunt of it.

For more on the economy, visit these posts: increases in household debt, job loss and unemployment (here, here, here, and here), cessna responds to the attack on private jet travel, Walmart encourages moms to make the difference, an animated explanation of the credit crisis, images of  the economic depression in Las Vegas (here and here), slumping car sales and overstocked lots, measuring the recession with beer sales, and changes in immigration.

Hmm. I have a job in academia, and I'm not feeling the recession. Is this because

This is a tough one. Let me consult my obvious political biases!

By the way, all those houses in and around Orlando selling for $58,000 for a three bedroom are not being sold to "middle and upper class" Americans. For some lower income folks, there has never been a better time to buy a home.

The omnipresence of recession talk on tv makes me wonder if all this negative talk is becoming a self-fulling prophecy. It's not just talking heads going on about it, but do we really so many recession-themed commercials? (Also is anyone else annoyed that Domino's is trying to pretend like their bailout promotion is new and not just a renaming of the 5-5-5 deal that they've had for years?)

I know that people are hurting, trust me. I am affected and so is my family and it's serious business. But not ever being able to get away from the financial situation even when watching mindless tv really creates a sense of doom and I don't feel like that attitude is going to get us out of this mess.

The Post Secret confession might mean "I'm willfully oblivious about my finances and my environment." In that, even if your day-to-day existence isn't blatantly impacted--you still have the security of a job and a place to live--it's hard not to notice more stores closed, more friends unemployed, housing prices declining, your 401K losing value, etc. Unless you're ostrich-headed, and *trying* not to notice this stuff happening all around you. But some people do that.

How many people (a) haven't had to adjust their expectations of future earnings, AND (b) have no assets and savings? Not that many I would guess.

This sounds like another one of those "I don't see it so it isn't an issue" write-ups.

How many people (a) haven’t had to adjust their expectations of future earnings, AND (b) have no assets and savings?

Just me, that I know of. :p (<--starting grad school next year, with hardly a few hundred bucks to my name but covered by a unchanged stipend.) This is a pretty unique situation though, and if my parents were a little older they'd be screwed. My friends are all job-hunting, and kinda *are* screwed. So, really just me.

I think this phrasing of the recession as a common problem also illuminates issues of personal vs. alleged shared national interests and the loyalty towards society's institutions

In Europe as well as in the US (I do not know about the rest of the world) the recession is being debated and handled on a political level as though were all in the same boat - there is a national 'we' and that 'we' apperently need to stimulate the continued growth of the capitalist economy, to stabilize the real estate market, to secure that car factories are still running and so on. No mentions of class or conflicting interests here.

And I know that personally I would almost welcome a crash in the real estate market in the country where I live - due to amongst other things a policy that favourises home owners, home prices and rents has skyrocketed the last years, making it close to impossible to purchase one with a middle- class income, and even renting is difficult and insanely expensive, with the result that homelessness amongst people with jobs, educations and stable personal lives are a wide-spread and very common problem. And yet, it's all about securing the home owner's continued profit, because 'we need' to get things back on track.

The recession is hitting outside the USA too :P And I would argue that it is definitely only upper-middle class to upper-class people who can snap up houses here as it is almost impossible to get a mortgage without a deposit minimum of £30,000.

The middle-middle class bracket is having housing problems, as they all seem to believe that by "downsizing" they can weather the storm but there is no one with enough money to buy their current large properties.

Sociological Images » THE UNEQUAL RECESSION: HOME FORECLOSURES AND THE DILEMMA OF THE DUPLEX — April 16, 2009

[...] recently posted about how the economic downturn isn’t affecting all of us equally.  We can say the same for [...]

Recessions tend to hit those who actually work at producing things that are sold to other people. In other words, productive members of the economy. This automatically leaves out academics.

And by all means let's have a meningful discussion of class in America. Can we start with your sabbatical?

How clueless can you be? No wait - don't answer that.