Cessna’s Response to the Attack on Private Jet Travel

In the wake of the embarassing incident where car company executives were called out for flying in private jets to beg Congress for money, Cessna, manufacturer of private jets, is fighting back.  At their new website, www.cessnarise.com, they’re framing the attack as skeptical hyperbole that doesn’t take into account the facts and recommending that potential purchasers of private jets “rise” above it all.  Some screenshots:

Notice that Cessna frames the resistance to private-jet-flying chastisement as a “challenge” that should be overcome. 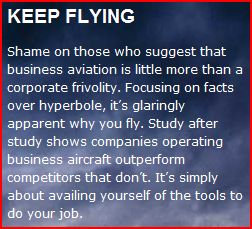 I don’t know whether private jet ownership is, in fact, economically smart.  I am rather sure that it depends on the company/person.  I do, however, think it’s interesting the way that Cessna is framing a rejection of the point made by Congress (that it is, perhaps, indulgent to insist upon private jet travel) in moral terms.  Customers should “rise” above, take on the “challenge,” fight the “naysayers,” beat the “skeptics.”    Real economics, then, appear to take a backseat to resisting the accusation that some of us enjoy extreme class privilege that is not necessarily justified by the books.

Same thing struck me as Gwen - it's a rather blatant example of correlation = causation, a logical fallacy. The ad as presented here seems less like it's trying to convince a buyer, and more like it's trying to give them a bunch of (flimsy) reasons to justify such a purpose, where both sides know that it isn't really necessary.

I think prior to the Correlation/Causation argument, the Whether Or Not These Studies Exist argument needs to be addressed. Establish that the studies are more than a copywriter's invention, then let's argue about methodology and reasoning.

Bah. Missed a closing tag. You get the picture, though.

Anyone who says that private air travel is a waste should get rid of their private car and start taking the bus or train imediately. You own a private car because you can afford it and it makes your life more efficient. The same goes with private air-travel. The private aviation industry employs over 1.2 million Americans. It contributes over $150 billion in economic output and is being threatened by misinformed slander. I don't know if people are simply speaking out of jealousy, but in these economic times, be careful for what you wish for.

Actually I don't drive, I bike. Cars don't make most people's lives efficient when one considers the amount of time it takes to earn the money to pay for them. It doesn't help that cars encourage patterns of development that create long commutes. Nor do traffic jams which waste billions of hours every year in the U.S. alone. The argument about creating jobs / economic output is ridiculous too. You could make the same one about jobs created by crack dealing or increased consumption caused by divorces.