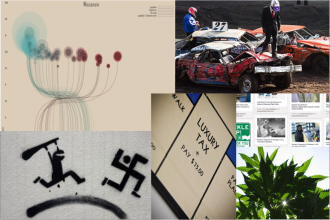 I’ve now ostensibly spent over half my wee life in college. First, as an undergrad, then a grad student, then some more undergrad, staff time, and now as a sort of academia groupie (let’s just say I loiter around a sociology department more often than some find “normal”). And yet, this is the first time in all those years that I’ve really felt the “holiday slide.” My brain essentially tried to go on vacation, starting the day before Thanksgiving (for our international readers, this year’s Thanksgiving was on Nov. 22). I’ve fought back valiantly, but not nearly so valiantly as our authors and grad students, who continue creating great work week after week—undeterred, like the post office, by rain, sleet, or the allure of two weeks without writing an exam, a recommendation letter, a grant application, a survey, or a holiday card. Here’s what they were up to this week.

“The Crime of Genocide,” by Hollie Nyseth Brehm. In which the author discusses the preconditions and perpetrators of genocide—why, despite cries of “Never Again!” these mass crimes happen, again and again.

“Beyond the Pop Psychology of White Identity and Racism: Deconstructing Racial Dualities,” by Matthew W. Hughey. In which the author looks at a white antiracist group and a white supremacist group and finds a surprising commonality in their construction of their own white identities.

“Demolition Derby and the Social Construction of Injury,” by Chris Uggen. In which we learn that some things make no sense without sociology… like how 10% of those involved in car accidents will develop chronic pain, but fewer than 7.5% of demolition derby drivers will ever report even mild chronic injury.

“Halving it All,” by Lisa Gulya. In which sociologist Michael Kimmel takes down the “war on men,” pointing out: “Equality sucks when you’ve been on top—and men have been on top for so long we think it’s a level playing field.”

“Desegregating the Toy Store,” by Andrew Wiebe. In which a Swedish toy company “reverses” genders in its holiday catalog, and Sociological Images’ Lisa Wade wonders: progress or publicity stunt?

“Assessing Brown v. Board of Education,” by Hollie Nyseth Brehm. In which The Atlantic checks in on the success of this landmark case, as supervised, desegregated districts drop to  just 268.

“Class War in the Toy Store,” by Andrew Wiebe. In which we see kids aren’t just learning gender, but class norms through their playthings.

“When the World is Watching,” by Shannon Golden. In which Ursula Daxecker finds the most monitored elections in developing democracies are also the most likely to lead to violence and unrest.

“Intelligence Squared Debates as a Teaching Tool,” by Kyle Green. In which a sociological research methods instructor shares a way to keep students analyzing smart, easily accessible debates, even after hotly contested political races are over.

“Who Pays America’s Taxes?” by Alexander Hertel-Fernandez and Vanessa Williamson. An excellent question.

“The Futility and High Cost of Criminalizing Marijuana Use,” by Katherine Beckett. A brilliant criminologist wonders why we pursue such dim drug policies.