Regional Variation in Support for Same-Sex Marriage in the U.S.

Over the past couple of years, the U.S. appears to have finally reached a tipping point regarding attitudes toward same-sex marriage. In polls from a variety of organizations over the last two years, more people supported same-sex marriage than opposed it, and in some polls an outright majority expressed support for marriage equality. 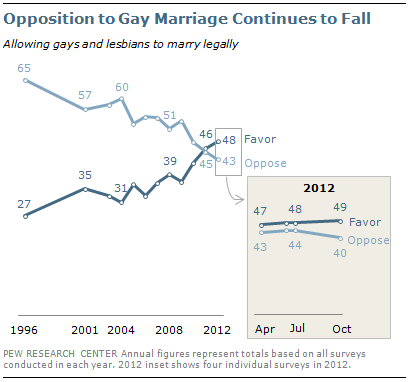 However, those attitudes vary widely by region. Looking more closely at the Pew data, we see that support is highest in New England, where over 60% of those surveyed in 2012 favored making same-sex marriages legal, but most regions of the U.S. now show more support than opposition. In fact, only in the South Atlantic and South Central states did more respondents oppose marriage equality than support it. The South Central region was least supportive, with 56% of respondents opposing same-sex marriage: 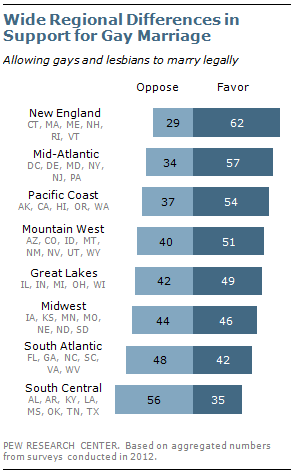 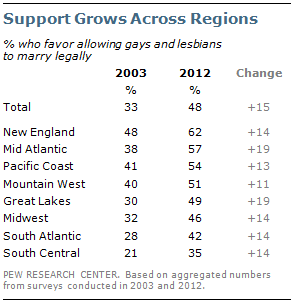 As the Pew Center post points out, it’s not that attitudes in the South aren’t changing, but they’re only now approaching where the rest of the country was on the issue a decade ago.

Typo: "grown in ever region" should be "every region"

The South is like America's Italy, usually on the wrong side of historical events.

It would be more noteworthy if there was something where the South was less reactive than the rest of the country, or some issue where opinion was uniformly distributed.

I think it's misleading to say "the South". Progressive attitudes about gay people are divided along an urban vs. rural divide. People who live in Bumblefuck, NY are not more supportive of same-sex marriage than people who live in Atlanta or Durham; it's just that New England has the highest urban population.

[...] Meanwhile, in the U.S., here are some infographics depicting regional variations to support for marriage equality. [...]

"[I]t's not that attitudes in the South aren’t changing, but they’re only now approaching where the rest of the country was on the issue a decade ago."

This could be said about pretty much any progressive issue.

[...] Regional Variation in Support for Same-Sex Marriage in the U.S. » Sociological Images. Share this:TwitterFacebookLike this:LikeBe the first to like this. This entry was posted in Feminism, Gender, and Sexuality and tagged LGBT. Bookmark the permalink. [...]

I love being from New England for SO many reasons.

It's called the "Bible Belt" for a reason. Don't forget that the rest of us Southerners have to be quite tolerant in order to put up with the intolerant ones.