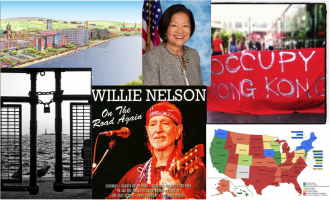 On the road again…

Greetings from Chicago, temporary TSP HQ! As dear Doug is off electrifying the Fargo-Moorhead area with his insights into Midnight Basketball and its neoliberal underpinnings, Chris and I are in the City of Broad Shoulders attempting to, I suppose, look broad (posture helps) at the American Society of Criminology meetings. We’re all dumbstruck at the presence of Stephen Pinker and have seen standing room only attendance at many sessions, even when wonderful restaurants and great sights tempt from just outside the conference hotel. At meetings like these, we get a certain jolt of rededication to TSP, meeting with authors as excited about open-access, de-jargon-ified (I’m an editor, let’s call that a word now) social science as we are. Here’s hoping for many very busy Friday Roundups to come, building on the conversations we’re all having on the road.

“American Immigration and Forgetting,” by Stephen Suh. In which Yen Le Espiritu, Katherine Fennelly, and Douglas S. Massey discuss the trajectory of immigration in the U.S. and how it became a non-issue in the 2012 election.

“Changing China,” by Andrew Wiebe. In which UC Irvine’s Wang Feng talks to the Voice of America about the voices of China.

A Few from the Community Pages

“The Uneven Presence of Women and Minorities in America’s State Legislatures and Why It Matters,” by Beth Reingold. Women are 51% of the U.S. population, but shy of 20% in the Congress and representing at lower state and local rates. What gives?