The internet is exciting, in part, because it offers people an opportunity to produce as well as consume content.  This is why it’s sometimes called “democratizing”; it spreads around the power to influence our collective conversations.

One reaction to the new Honda Fit She’s illustrates a form of resistance through the production of media content.  The She’s is a 1950s throwback being marketed to women in Japan.  In addition to coming in several shades of pink and the inclusion of a heart in the logo, it has pink stitching inside, windows that cut ultraviolet rays (to prevent wrinkles) and a special air conditioning system designed to improve skin quality (to erase wrinkles). 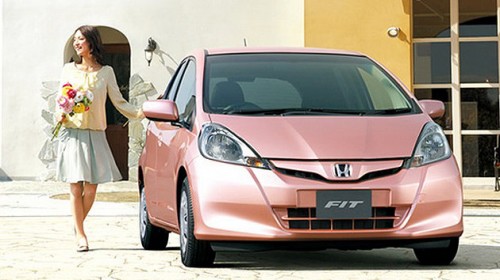 A website, called IdeasForHonda, has emerged in response.  It mocks Honda’s stereotyping of women with satire, offering its own ideas for what women want. Here are some of the entries: 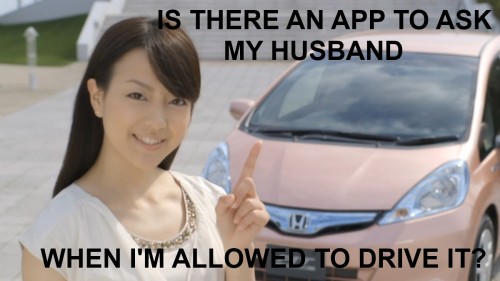 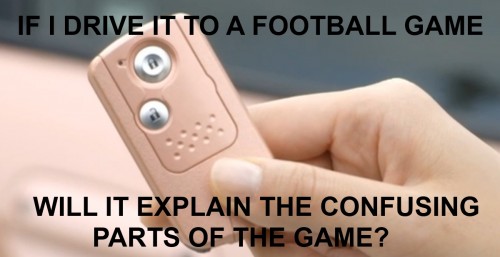 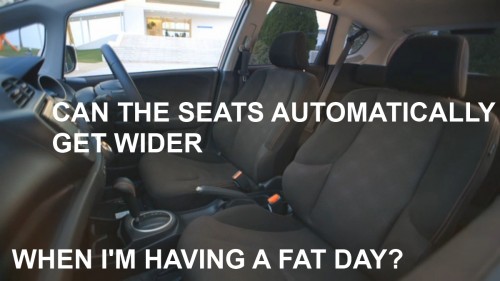 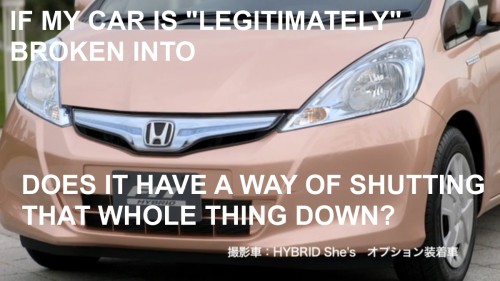 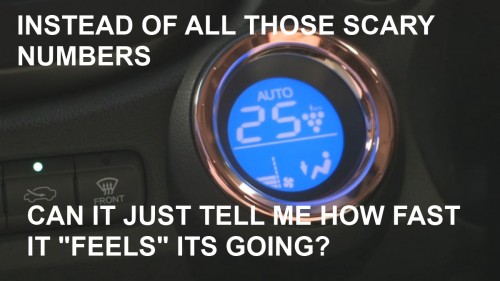 This is just part of  a wider internet response to the She’s and this type of reaction has prompted companies to make changes.  Recently, for example, Gap pulled a t-shirt with the phrase Manifest Destiny and we’ve posted about successful resistance to the Obama sock monkey, the Pretzel Crisps “You Can Never Be too Thin” ad campaign, Nivea’s “Re-Civilize Yourself” ads, and the Abercrombie push-up bikini for kids.  Here’s to democratization.

The 2nd (football game), 3rd (fat day) and 5th (scary numbers) seem to be making fun of women rather than fun of stereotypes. The 4th is a good one.

The She’s is a 1950s throwback being marketed to women in Japan.

Saying that it's a "1950s throwback" when you are referring to another nation with its own culture and its own internal sexual politics is just shoddy writing masquerading (poorly) as analysis, especially since you provide no evidence of this point (nor do you link to evidence of this point). And - again - you fail to delve into (or even mention as a tangential point) any of these points of what might drive a Japanese car manufacturer to decide to make and market a "women's only" car in Japan. There are definitely worrisome processes that are taking place within Japan - many of which I believe were likely drawn upon (consciously or not) in the design of this car, but the way that you're framing this article (and the previous one you wrote) really seems quite lazily done.

I also want to point out that you failed to make any point of what happens when globalization collides with significantly different sexual politics; a topic that you've discussed before, but seem - for some reason - unwilling to bring it up in reference to this vehicle by this company. Why the double standard?

I AM saying that you have continued to fail to even mention any of the social elements in Japanese culture (which ought to be clear to you as a PhD in sociology that it isn't much like US culture at all) that could lead to the creation of this product. I AM saying you fail to introduce into the discussion a the topic of globalization and multicultural perspective, but appears to tacitly present Honda's Japanese actions as being indistinguishable from American automotive history (which is why I chose your statement to start my comment), sexual politics, and culture. And it is these points that I find intellectually lazy and duplicitous, especially since you have taken the time - many times in the past - to show where White American culture misappropriates others' cultures, removes any distinction between others' cultures, and also takes others' cultures and uses them as mere backdrop for a statement of White American culture.

If you wrote, "Respecting culture entails endorsing sexism only if we demonize certain cultures as irredeemably sexist and unable to change.  In fact, most cultures have sexist traditions.  Since all of those cultures are internally-contested and changing, no culture is hopelessly sexist. Ultimately, one can bridge their inclinations to be both culturally sensitive and feminist by seeking out the feminist strains in every culture and hoping to see those manifested as it evolves," in your post titled IKEA Erases Women for Saudi Arabian Audience and wrote, "it raises interesting questions as to (1)  just how cognizant companies should have to be about various stereotypes around the world and (2) whether the biased histories of some countries must be more attended to than others," in you post titled Are They Racist or Are We Ethnocentric?", then I wonder why you choose to not bring this level of discussion to this topic as well and why you seem (at least to me) to be oblivious of the point that you are not doing what you suggested be done in your previous posts when confronted by issues like this.

The only significant democratization taking place here is taking something foreign, in this case a product that does not appear to be marketed/sold outside of its native country, and creating American-oriented internet memes for it.  Todd Akin, football, and the notion of having a "fat day"...  I also don't know if girls lag behind boys in mathematics in Japan the way they do in the U.S. and many European countries, but from attending (American and British-based curriculum) international schools, I do know that math was a cakewalk for all the Japanese students; apparently Japanese education teaches advanced level 11-12th grade math in their equivalent of middle school.  So I doubt the "scary numbers" reference is all that pertinent to Japanese culture.

I echo Umlud in that I'm not defending the reasoning behind manufacturing the car, but I believe these memes deserve little more than an eyeroll.  This is not a meaningful form of resistance.  I have a controversial view of cultural appropriation, in that I don't think it's always innately negative, but surely this here is a case of mis-appropriation, or at least, insensitive cultural blaseness: taking a foreign product and creating comedy and/or social critique from it, mostly failing to make it relevant to its local culture.

What bothers me is that they purport to be marketing to women by using pink, but that is probably the most hideous shade of pink I've ever seen.

Do women in Japan actually buy this crap? What studies did they do to make them think this would ever work anywhere else?

It's more likely the UV block is to prevent tanning.  Many Japanese women use parasols and sunblock to stay light skinned.

"a form of resistance through the production of media content"?  So you must have versions of these that Japanese women have created in Japanese?  Since the product is just meant for Japan, then American women creating a response to the product is not resisting against anything.  Rather, it is just an example of looking at a foreign country through our own lens and coming to the conclusion that they are so much more backwards than us.

Even your position that this is a throwback to the 1950's belies a bias towards thinking of Japan as being 50+ years behind the USA, which is not entirely accurate.

As if Asians care about your sociological guilt trips, it's manufactured outrage for white liberals as far as I can tell

lol, America did something similar in the 1950, that means that American culture is 60 years more advanced than the barbaric culture of that country we nuked. Let's make fun of it using using American centric jokes about how confusing football is and how bad we are at math, despite the fact that soccer isn't confusing and Japanese women (and men, and small children) have no issues solving math problems that would stump American high school graduates.

Did I mention that I'm a "sociologist" with a PhD and that you should take my opinions seriously because I "know what I'm talking about"?

Subversion through parody cuts both ways. We see postings here all the time expressing earnest outrage - with much pointing and spluttering - at transgressions against what you would call 'appropriate behaviours and values', (or some such), and I would call 'political correctness'.

While I strongly disagree with the idea that we shouldn't criticise sexism because it's not american, there is a point to tye ethnocentrism here. The authors don't aven try to make their jokes universal.

As an aside: really, you don't think women can be stereotypes as bad at maths just because Japan is better on average than the US? There are grades to elites too.

Shaming women is always bad....except when we're shaming women who don't think like us!  Wooooo Whooooo!! Let's pile on!!!

I don't understand what's wrong with marketing a car towards women. All kinds of demographics are marketed towards, and I'm having a hard time understanding when exactly the problem arises. Is it because it's pink? I'm irritated as hell at minivans, but those are definitely marketed towards a specific demographic. Ditto little sports cars, and huge work trucks that will never do any work. Most women will never buy a She's. Some will. So what? I don't think it's a worse car because it's for women. Hopefully (like with minivans as the example) the people who DO want them will contribute positively to the feature development.

I drive a crappy little car because it's all I can afford - but if I did have money to buy a nicer car, I can see that a LOT of the marketing and R&D money is spent on male interests. Not that those can't be my interests - I don't believe in one gender over there, the other over here. But outside of my standard complaints about capitalism, I don't think it's wrong for a company to develop ONE car based on a female consumer, even if their first try doesn't hit the mark.

Anybody with better grasp can correct me on this, but...

"She's" would be pronounced "Shizu" in Japan.

"Shizu" is also a popular name for a baby girl. It means "Quiet."

That's a whole 'nother level of facepalm nobody seems to be catching onto.

how adorable. sorry to break it to you, but japanese women don't have "fat days"...

How is the She's all that different from the 2000s VW Beetle? Those came only in pastel colors and had built-in flower vases. At the very least I'm not sure the descriptor "throwback" in warranted here.

[...] then there were the appropriate reactions in November to the Honda She’s, a car marketed to women in Japan with special light and [...]