Last week, in response to Jurgenson’s earlier typology of dualist theorizing,  I typologized empirical/experiential reality upon a porous continuum between pure digital dualism and pure integration. Each of these poles represents a problematic and unrealistic ideal type. The intervening categories, however, represent theorizable empirical situations. In an effort to explicitly link my argument to Jurgenson’s,  I labeled these intervening categories using the language of his typology. Jurgenson critiqued this linguistic choice, and I agree.  Having driven home the connection, and diagnosed the “slipperiness” of theory that Jurgenson decried,  I now re-work the language of my typology to more precisely represent the meaning behind each categorical type. Although the adjustments are slight (I change only two words–but very important ones), the meaning is far more lucid. Below is the original post, with my typological categories reworked linguistically. Changes are indicated by red text. Further suggestions/critiques are welcome.

Several weeks ago, Nathan Jurgenson (@nathanjurgenson) further delineated his theory of digital dualism, laying out a typology of dualist theoretical tendencies in relation to the “augmented” perspective. In this post, he critiques existing theorists/scholars/technology analysts not only for being dualist, but also for shifting sloppily and often indiscriminately between levels of dualism. Here, I want to diagnose the problem of slippery theorizing and emphasize the importance of a flexible perspective. I begin with an overview of Jurgenson’s typology.

For any newbies to Cyborgology, Jurgenson coined the term “digital dualism” to refer to the false dichotomization of physical and digital. He argues instead for an augmented perspective, through which digital and physical, atoms and bits, are understood as unique, but inextricably intertwined. Last week, he located the augmented perspective within a dualist—integrationist typology. The following is taken directly from his post:

Strong Digital Dualism: The digital and the physical are different realities, have different properties, and do not interact.

Mild Digital Dualism: The digital and physical are different realities, have different properties, and do interact.

Mild Augmented Reality: The digital and physical are part of one reality, have different properties, and interact.

Strong Augmented Reality: The digital and physical are part of one reality and have the same properties.

Jurgenson champions the “mild augmented reality” approach, and I agree. He critiques other writers, however, not only for theorizing within the problematic realms of strong digital dualism, mild digital dualism, and strong augmented reality, but also for shifting seamlessly between perspectives. I argue here that this slippery and seemingly sloppy theorizing is the product of a slippery reality, in which objects of inquiry fall differentially and sometimes simultaneously into different levels of digitality. To be sure, Jurgenson and others have noted that some realities are more physical or more digital.  My idea here is not new. Rather, I simply hope to articulate the digital/physical empirical spectrum more explicitly.

To do so, I map Jurgenson’s typology onto empirical reality, arguing that theorists’ movement between typological categories may reflect their inadequate attempts at a general theory of technology rooted in particular technological forms. In order to transfer from theory to empirical reality, I have shifted the typological labels, and added one extra category. The key difference between Jurgenson’s theoretical typology and my empirical one, is that his has only one “acceptable” category, whereas each of my categories, excluding the first and the last, describe potential realities for technological objects of study.

Pure Digital Dualism: This is an Ideal Type in which digital and physical are fully separate, share no properties, and do not interact

Like Jurgenson’s strong dualism, pure dualism is an Ideal Type, a polar location against which to measure the level of digital/physical integration. One would be hard pressed to find such an example in empirical reality (in fact, I argue it would be impossible to do so). The closest one might come to the fully physical, would be the experience of a hike through the wilderness, mapped on paper, unshared via Facebook. The closest one might come to the purely digital would be bots playing video games. Of course, the hiker’s choice not post on Facebook (among other things) connects hir to the digital, just as the human creators of bots, and their programmed algorithms connect them to the physical.

This is most closely analogous to Jurgenson’s mild dualism, but differs significantly in that it reflects augmented reality, rather than a true dualism.  Indeed, the examples above are, in reality, dualistic augmentation rather than purely dualist. Further examples include anonymous online spaces, virtual worlds, and face-to-face, non-documented/shared interpersonal interactions.

This is analogous to Jurgenson’s mild augmented reality. Here, we can think of livetweeting through a conference presentation. The presentation and its surrounding conversation are simultaneously physical and digital, and mutually constitutive, but each component has explicitly unique properties. For instance, text versus speech, longevity of the content, temporal orientation. 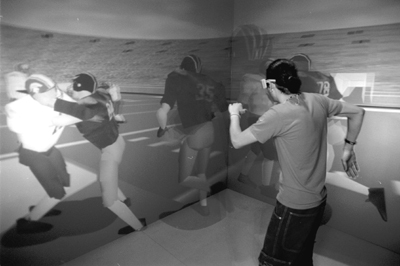 This does not have an analogous category in Jurgenson’s typology, but refers simply to augmented reality in which the digital and physical are *very* closely intertwined. Integrationist augmentation, for example, is represented by motion activated virtual reality, in which the digital environment guides cognitive and bodily movement,  is navigated through  bodily and cognitive movement, and adjusts to bodily and cognitive movement.

Pure Integration: The physical and digital are one in the same.

Like strong digital dualism, and pure digital dualism this is an Ideal Type, non-existent in empirical reality. The closest one might come to this are some medical devices in which the physical body and its digital regulatory technologies mutually shape one another and merge together (e.g. a pacemaker becomes part of the person and hir bodily rhythms, just as tissue and blood become part of the pacemaker).

My purpose in constructing this typology is twofold. First, “technology” refers to an almost infinite set of objects, with distinct particularities. Second, categorical attempt to capture empirical reality are always mere approximations, and their demarcating boundaries are necessarily porous.  With these two points in mind, I argue that general theories of “Technology” must be fluid enough to move through porous empirical boundaries, and precise enough to account for the particularities of “technologies.”   The augmented perspective, I argue,  possesses these key properties.

The theoretical missteps and slippery techniques that Jurgenson decries, I argue, result from attempts to either theorize all technology as though it fits within a single typological box, or contrarily, to move between typological boxes without careful attention to empirical nuances.

[...] gave us David Banks’s beautiful “Time Traveling in Troy, NY,” Jenny Davis’s edits to her own previous post on pure dualism and pure integration, and Sarah Wanenchak on [...]

[...] efforts by a variety of writers at Cyborgology to advance the digital dualism critique (here and here, for example), but if it is of any value in that effort, I’d be glad for it. Share [...]

[...] 4-part typology outlined above and reformulates it in terms of materiality. She links to her earlier post on this reframing, but I personally much prefer the aesthetic and examples in this more recent [...]

[...] strong and mild variants of both digital dualism and augmented reality, and Davis offered a corresponding empirical typology. (Sarani Rangarajan (@nineran) offered a critique of Jurgenson’s first draft of the strong/mild [...]

jenny, i just went back and reread this post and had some thoughts. my position to this would be that we could understand all of these categories in either a dualist or a synthetic lens. for instance, being in the wilderness with no internet and being immersed within a virtual reality helmet are certainly different, but it is my view that both of these situations should be thought of with synthesis, rather than dualism, in mind. the digital is still at play for those in the wilderness, and materiality, bodies, poliitcs, etc is still at play in the virtual reality helmet. so i still do not think calling these level of "digital dualism" or "augmented reality" is quite right.

however, i do like where this going, and it would be nice to have a list of categories that get at the degree of explicit on and offline coupling/decoupling. for instance, the design of facebook's real name policies or the twitter integration at theorizing the web both are architectures of coupling. conversely, tumblr's lack of real-name requirements or a campground's lack of wifi promote decoupling. having some language here would be great! just as long as we dont see even highly decoupled environments through a lens of digital dualism.

Multidimensional Material Mapping (or what camping and WoW have in common) » Cyborgology — March 26, 2013

[...] of processual-theorizing, I want to further refine my material mapping of digital dualism for yet a third time*. With the ongoing dualism debates, the time is ripe for theoretical rethinking and [...]