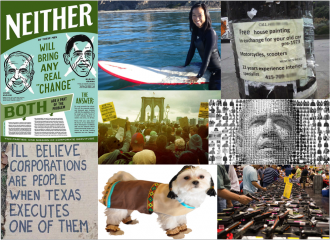 Say, Can I Offer You Some Social Science?

As The Society Pages’ associate editor, I’m in a position to see nearly all of the fantastic content that comes across our transom every day, but it’s recently been pointed out that we don’t offer a super simple way for readers to do the same. To that end, I present the first of our (hopefully) weekly Friday Roundups.

This week, we’ve seen a lot of new work, much of it dealing with next week’s U.S. general election, but with some “palate cleansers,” too. Here are all of this week’s articles from across TSP’s departments, as well as a few highlights from our Community Pages.

“The Social Significance of Barack Obama, Revisited,” by Eduardo Bonilla-Silva, Joe R. Feagin, Enid Logan, and Josh Pacewicz. In which four scholars reflect on and update their thoughts on Barack Obama just before the 2008 election.

“Surfing and My Mindset,” by Jennifer Lee. In which a surfing sociologist considers the role of mindset and gender in her own expectations of wave-riding prowess.

“Movements+Elections=Democracy,” by Steven Buechler. In which the author considers social movement theory, movements in action, and how democracy and activism are mutually reinforcing forces.

“Social Fact: Those Who Can, Vote?” by Debby Carr. In which American voter registration and voter turnout are examined along age, race, and educational lines.

“Tired of Politics?” by Doug Hartmann. In which political fatigue spurs Hartmann to get a little philosophical.

“July & August Media Awards for Measured Social Science,” by Hollie Nyseth Brehm. In which we relive summer with some great social scientific reporting.

“Living Despite Capitalism,” by Erin Hoekstra. In which alternative economies and crowdfunding illustrate responses to recession.

“War in the Windy City,” by Andrew Wiebe. In which Sudhir Venkatesh recommends strategies to curb the rising murder rate in Chicago.

“Ain’t Too Posh to Push,” by Sarah Shannon. In which we recommend Louise Marie Roth and Megan Henley’s new article on who really gets C-sections.

“Why Are Mitt Romney and the Republicans Trying To Kill America’s Wind and Solar Power Industries?” by Eban Goodstein. Where will environmental policy go from here?

“Democrats, Republicans, and the Prospects for Women Candidates in Election 2012,” by Karen Beckwith. Congress is 17% female—can we do better?

thanks for roundin' 'em up, Letta!