Who’s Reporting the News? An Analysis by Race and Ethnicity

Larry Harnisch, of L.A.’s The Daily Mirror, let us know that 4th Estate analyzed the racial and ethnic breakdown of reporters covering the presidential election for 38 major print media outlets. The analysis included front-page articles published between January 1st and October 12th of this year.

Here’s the key for all of the following images:

For every major topic, the overwhelming majority of front-page articles were written by non-Hispanic Whites, while racial/ethnic minorities were underrepresented compared to the overall U.S. population:

Major newspapers varied in the diversity of those writing their feature articles. The Dallas Morning News was the most diverse, with a particularly large percentage (18.8) of front-page stories written by African American reporters. The San Francisco Chronicle had the least diversity; 100% of its feature political stories were written by White non-Hispanics: 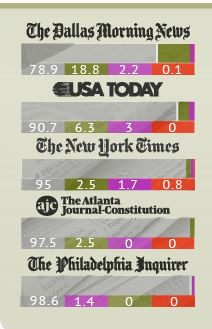 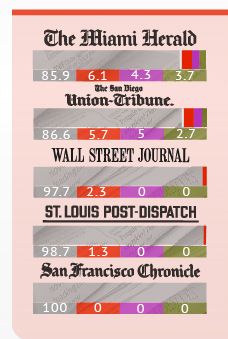 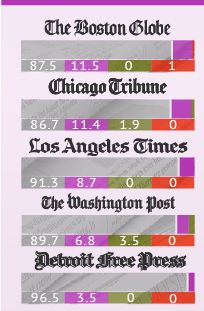 Overall, 93% of the feature articles analyzed in the database were written by White non-Hispanics, 4% by Asian Americans, about 2% by African Americans, and less than 1% by Hispanics. Compare that with each group’s proportion of the overall U.S. population:

These numbers clearly matter in terms of career opportunities and exposure for minorities within the industry. But they also should concern us readers. What does the lack of diversity mean in terms of the issues covered, the political contacts and average-Joe-voters spoken to, the topics seen as important enough to cover?

Also see our earlier post on the gender of those quoted in news stories about the election.

The only people who become reporters are the children of the wealthy. It doesn't pay enough to cover your student loans, and the competition is fierce. The lack of diversity represents a few things. 1. Minorities have more lucrative opportunities and are less interested in prestige occupations like reporter or curator. 2. The industry has ridiculously low turnover, white editors are typically working at their papers for 30+ years. So there isn't much room for new folks. My guess is all the minorities are younger and it will take 30 years before they are running the show. 3. There are very few jobs and they go to people with connections. Internships at newspapers all go to minorities, the discrimination is absurd, but they can't get jobs, when there is one new job a year it goes to the most connected rich kid. My wife may have been valedictorian at her ivy league college, but getting a job as a reporter has meant not leaning on her own absurdly long list of accomplishments, but instead leaning on family connections and blackmail. No one wants to hire another ivy league educated jew, they want someone who can bring a different perspective to their job, and I don't blame them. But don't expect people to lay there and take it.

What seems blatantly missing here is the representation of indigenous peoples...

How are you determining the ethnicity of the journalists?

While it may be true that a newspaper with an all-white staff might not cover every issue important to minorities or people of other backgrounds, I think it would be wrong to assume that they won't cover any of those issues (not implying that the author of this article thinks that, just that someone COULD). Who says, just because a person is white, they cannot be a voice for those different than them? That whites will only write about "white issues", or interview white people, or speak for the white person could be a dangerous, and most certainly incorrect, assumption. I also think that often, journalists are driven to write about and discover things unfamiliar to them and are called to help people through their work. A journalist could certainly use his or her position to inspire change, whatever ethnic background he or she identifies with.

Who’s Reporting the News? An Analysis by Race and Ethnicity | Welcome to the Doctor's Office — November 2, 2012

[...] Gwen Sharp summarised one application of this approach, Who’s Reporting The News? An Analysis By Race And Ethnicity. [...]