Social Media and Our Atmosphere of Augmented Dissent

Mass collective action is in the air, on the ground, on the web; indeed, there exists today an atmosphere conducive for revolutions, flash mobs, protests, uprisings, riots, and any other way humans coalesce physically and digitally to change the normal operation of society. [Photos of protests around the globe from just the past 30 days].

Some gatherings have clear goals (e.g., ousting Mubarak), however. there is also the sense that massive gatherings are increasingly inevitable today even when a reason for them is not explicit (e.g., the ongoing debate over the reasons for the UK Riots or the current #occupy protests). For some this is terrifying and for others it is exhilarating. And still others might think I am greatly overstating the amount of protest actually happening. True, we do not yet know if this second decade of the 21st Century will come to be known for massive uprisings. But if it is, I think it will have much to do with social media effectively allowing for the merging of atoms and bits, of the on and offline; linking the potential of occupying physical space with the ability of social media to provide the average person with information and an audience.

For example, the current #occupy protests across the United States (and arguably the world) are part of a movement that focuses on the augmentation of the physical and the digital. #Occupy may have been born online but from the very beginning had everything to do with physical space. The name “#occupy” speaks directly to the revolutionary tactic of utilizing both the power of physical and the digital.

AdBusters started all of this online and were then joined by the internet activist group Anonymous. Social media has been used to promote the cause, networking massive numbers of people and allowing the movement to go viral (see Jenny Davis’ post on the differing roles of top-down organization versus the rhetoric of “grassroots” for this movement). Once organized, #occupy protestors are taking photos, tweeting and videoing police brutality (which, arguably, and perhaps ironically, gave the protests a second life because it was then that more mainstream outlets began to cover the movement to a greater degree).

However, more than a “digital” protest, the movement has been fundamentally concerned with “occupying” geographic space, mobilizing flesh-and-blood bodies in an area, yelling, walking, breathing, sleeping and doing what physical bodies do. We have come to learn that effective mobilizations require the utilization of physicality, digitality and the important relationship between the two.

This is augmented revolution. It is a tactic, and is one that is becoming increasingly refined. Those organizing the #occupy protests learned from the Egyptian uprisings. I’ve described previously how those were augmented; utilizing both the physical and digital to more effectively create change. I’ve also looked at how the Anonymous BART protests followed the same path. Predictably, the UK Riots and the subsequent clean-up effort did the same. This all follows my larger thesis that we live in an augmented reality that is the product of a massive implosion of atoms and bits, opposed to the ‘digital dualist’ assumption that views the digital and physical as separate [read more about that here].

Augmentation Means That Protestors Have a Voice 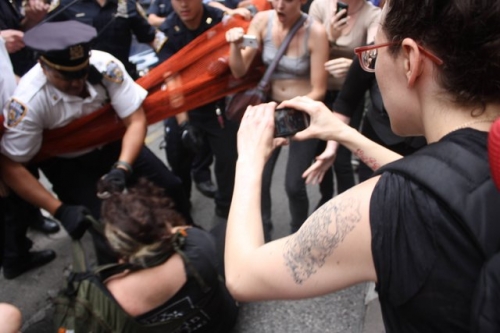 There are many reasons why we seem to have an atmosphere of dissent today. We are witnessing political mobilizations across the Middle East, North Africa, Asia, South America, and mass protests just about everywhere else. Riots and flash mobs are increasingly making the news. And I do not think we can divorce all of this from new communication technologies. The list of reasons why this might be the case are well-known: people have access to more information; the internet allows for ideas created by just about anyone to spread rapidly across the globe; people can more effectively network; ideas and events can “go viral”; and so on. This territory is obvious and well-covered. I want to focus on one feature unique to social media that might also explain the atmosphere of dissent we seem to be breathing in.

Protests today are far more participatory than ever before. Of course, all protests are almost by definition participatory. Showing up, marching, shouting, making signs: all of these activities characterize active participants of a protest. However, in physical space, one’s potential audience is small. The underlying danger in any protest movement is that ambition, motivation and a sense of hope that each individual is making a difference might be lost. Your chant or sign may reach few eyes and ears. Protesters in the crowd have to constantly reassure each other that they are important and relevant. In physical space, you may often feel that you are shouting into the wind.

Social media has changed protest similarly to just about everything else it has touched. Today, people are not passively consuming dissent, but are more actively involved with creating it. The producers and consumers of revolutionary messages are increasingly the same people. Most of the protestors can snap photos, shoot videos, organize on Facebook and tweet to the world. This is participatory, prosumer, dissent.

Beyond the new ability to create all of this digital content, what is often overlooked is how social media promises an audience for this content. This is an important change. A lesson we have learned from social media in general is that providing an audience also imparts motive to behave. Would we feel the necessity to take a picture of the breakfast we just made if Facebook could not promise the audience to “like” and comment on that photo?

The motivation to protest has existed long before social media (as Malcolm Gladwell likes to point out). And even the tools to document and express ourselves existed before social media (photography, video, word processors and the like). What is different today is not just the ability to create content but that the audience social media guarantees gives us motive. No longer just shouting into the wind (made of atoms), one is also shouting into a network (made of bits); and there is an audience there that very well may be receptive to your message.

And this is new.

As a protester simultaneously marching in physical space and documenting online, you can watch the stream of activity by following the protest’s hashtag on Twitter; your tweet retweeted by someone else on the other end of the globe. You can post your photos to Facebook and watch the comments come in. Augmented by the internet, what you are doing matters. This is the not-so-secret weapon of augmented revolution.

This is why social media has created this flammable atmosphere of mobilization that is growing around us (as well as the counter-movement of digital repression). That the rise of social media is now historically coupled with large-scale dissent is no coincidence. Unrest, protest, riot is all more possible, perhaps likely, because social media has united the power of both physical space and networked digitality. Mass collectives of networked individuals (cyborgs) is the new normal (for better or for worse).

[...] of technology in aid of both the use of public space and the “amplification” of voices. Social media and the internet are undeniably extremely powerful and special attention should be paid to them, but the spoken and the printed word clearly also have [...]

#OWS and the Formation of Rhizomatic Associations » Cyborgology — October 7, 2011

[...] in organizing and publicizing the organization – as well as the results- of major protests. Nathan has also done an excellent job of discussing the relationship of online and offline action. And [...]

This article brings up a lot of good points. Having come to expect a participatory culture online, we find ourselves disenchanted when faced with the post-Industrial Revolution hierarchies still prevalent in the offline world. The ability to voice our dissent online and to participate in an active conversation is now being brought into the real world, inevitably causing the old vanguard to stiffen up and fight back. Thousands of voices are suddenly clamoring to be heard and, while their overall message may be somewhat muddled, their underlying drive is clear: we don't want to be told how things are, we want to talk about it and come to a decision as a group. I also wrote a post about it recently: http://thehipstereffect.com/2011/09/28/a-beautiful-anarchy/

Love the thinking here. If you're implying that the ease of voice and audience is *causing* movements like OWS, rather than enabling them, I'm not sure it's that simple, but I do like your point about "sudden" audiences, and how the audience is now giving cause for performance, rather than traditionally true opposite (where a need to "perform" (and vocalize ideas) hopefully finds an audience.

[...] In the United States the emergence of the Occupy movement shows that technology and our global atmosphere of dissent is the effective merging of the on- and offline worlds. We cannot only focus on one and [...]

The #OWS Raid at the Intersection of the Physical & Symbolic » Cyborgology — November 16, 2011

[...] media and information with the importance of flesh-and-blood bodies existing in physical space, our global atmosphere of dissent is increasingly one of an augmented revolution. Indeed, these are not protests centered online, as [...]

[...] In the United States the emergence of the Occupy movement shows that technology and our global atmosphere of dissent is the effective merging of the on- and offline worlds. We cannot only focus on one and [...]

[...] are also events produced by history, and we should be conscious of history when we examine them. Augmented dissent and revolution in its basic form is not new, nor are the patterns of mobilization and diffusion that we see [...]

[...] Internet memes refer to these cultural units (catch phrases, images, fashions, expressions etc.) that spread rapidly via internet technologies, constructing, framing, and revealing cultural realities. Lolcats, for example, a quite successful internet meme, reflects a growing affection between humans and companion animals, and has created the normative linguistic practice of asking if one “can haz” something. In a less innocuous example, the numerous  #OWS memes (described in PJ Rey’s post linked above) portray, reinforce, and  aid in the construction of what Nathan Jurgenson describes an atmosphere of augmented dissent. [...]

[...] Similarly, Nathan Jurgenson has written extensively on how social media has contributed to the “participatory, prosumer, dissent” of the Occupy Movement, playing into the much larger atmosphere of augmented dissent that has gripped the Middle East and [...]

[...] the creation and diffusion of protest materials and repertoires of contention, they enable the extremely rapid spread of information across physical and figurative boundaries. They speed up every element of this process. But that leaves a rather large element of all of this [...]

[...] within this narrowly-focused event, we share a similar affinity and purpose. Even more importantly, our activism has an audience even if mainstream media doesn’t pay attention. Social media has a reflexive relationship [...]

Technology and the Power of the Injured Body » Cyborgology — March 28, 2012

[...] of the Civil Rights movement through coverage of protests, especially visual coverage. But in the context of augmented contention – in an atmosphere of ambient documentation – images are captured and spread at an [...]

[...] played in the Arab Spring or the current #occupy protests spreading globally. As I’ve written elsewhere, new ways of communicating facilitated in part by smart phones and social media have given voice [...]

The Politics of Communications Technology » Cyborgology — May 4, 2013

[...] earmarked or popularly associated with the digital technologies they used so well: the Arab Spring, Occupy Wall Street, Anonymous, and the BART protests have all out-maneuvered (at least for a time) the state and [...]