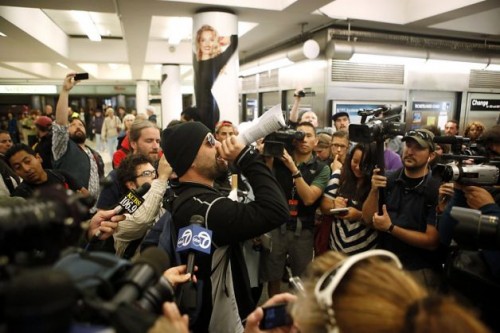 Why is it that authorities are so quick to fear, blame and entirely eliminate electronic communications in the face of unpredictable gatherings of people?

Hosni Mubarak pulled the plug on the Internet during the Egyptian uprising in an attempt to do away with the protesting masses. After the recent riots in the United Kingdom, Prime Minister David Cameron blamed social media and pondered shutting down electronic communications. And, most recently, San Francisco’s Bay Area Rapid Transit (or BART) subway system turned off mobile coverage because there were rumors of protest. Authorities large and small across the globe are worried about people being more connected than ever.

Putting aside the important issue of free speech, I want to ask why BART officials feel that communication technologies are making people less safe in times of confusion? Is it part of a larger knee-jerk reaction to not understand social media and thus be scared of it? Ultimately, disrupting communications in a time of potential crisis to make people more safe is a fallacy; it does just the opposite. 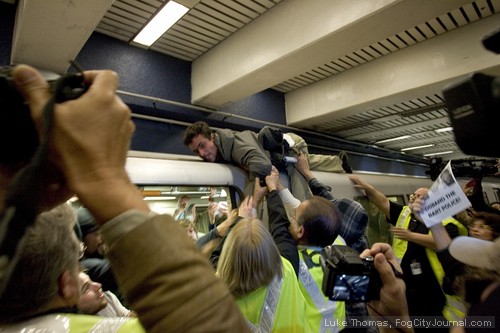 To very quickly recap the events in San Francisco: The group No Justice on BART organized a protest on July 11th in response to a string of incidents concerning BART police officers including the killing of a local transient and a previous shooting of a restrained and unarmed man. There were rumors of another protest this past Thursday. BART responded by shutting down all mobile service in some of its stations, including access to 911, in an attempt to disrupt the protest. “It all boils down to the safety of the public,” Benson Fairow, BART Deputy Police Chief claimed.

The rumored protest never materialized, but the Mubarak-style restriction of communication resulted in condemnations from the ACLU and other free-speech organizations as well as angering the hacker-group Anonymous [see their response]. BART websites have been attacked and Anonymous has organized another protest scheduled for this evening (Monday, August 15th). BART has announced they may again shut down mobile service in its stations.

Why This Matters: This Precedent Makes Us All Less Safe

Groups like Anonymous and the ACLU are most worried about the important free speech issues at play here. The silencing of voices electronically is just as wrong as silencing individuals in physical space (indeed, as we know, the two have blurred into each other). Further, journalists increasingly rely on citizens to take pictures, videos and tweet about what is happening on the ground. Without mobile technologies, it will be harder to expose, for instance, unwarranted police brutality against protesters. BART has responded that they are making a trade-off: less free speech for more safety.

Let’s leave the free speech issue aside for only this one post and focus on the safety of individuals during a protest. The precedent being set is exactly wrong; cutting off electronic communications in a time of potential crisis makes people less safe.

BART, or any other organization with its fingers on the electronic-communications switch, can only identify a so-called “security risk” (read: “protest”) once significant organizing for that protest has already been done. If BART, or any other authority, knows about an event, it is already viral and organized enough. Yes, without mobile service it will be more difficult for protesters to coordinate with each other, post pictures, videos, tweets and status updates to rally others and get their message out. But, once already organized, the crowd is a crowd and it will do what a crowd does. Mubarak turning off the Internet in Egypt, something that the U.S. condemned, most assuredly did not disperse the already-organized crowd.

If anything, what played out in Egypt might also be the case in San Francisco: far from disrupting the crowd, turning off electronic communications effectively galvanizes and instigates the crowd. This very timely research paper argues that pulling the plug offers only an “illusory sense of security.” Already upset and organized, the crowd is then faced with a basic attack on free speech in a moment precisely defined by getting one’s voice heard.

To silence someone in such a draconian manner in a society founded on free speech literally screams that what they are saying must be important. The silencing of speech simultaneously confirms its importance. For BART, this is a fundamental mismanagement of the economics of power.

Who does need mobile service in a volatile and thus less-safe moment are those potentially injured (protesters and bystanders alike).

BART knows that crowds are unpredictable and might bring about some amount of chaos (their justification for cutting off mobile service in the first place). And BART officials, no doubt, watched UK officials (stupidly) blame social media for their riots. In this state of confusion, disruption and exception, safety becomes an issue. Individuals very well might need to communicate unpredictable emergency situations by contacting others, 911, etc. Sociologist Zeynep Tufekci is dead on when she, in a tweet, calls BART’s decision “wrong, evil, ineffective & dumb.”

Remember that electronic communications were overwhelmingly used for support during the UK riots, not just harm. Sites like Twitter and Facebook are being used to clean up the streets, out criminals, report facts on the ground, and so on.

Simply, what BART is effectively doing to those caught up in any protesting crowd is to (1) instigate a potentially chaotic situation and (2) remove the primary way in which one can get help. This is irresponsible, morally wrong, dangerous and a terrible precedent. It focuses only on the potential harms of electronic communications and none of the important benefits.

To conclude, this seems to be part of a larger trend to forget about the various ways in which electronic communications serve to support individuals and groups. PJ Rey and I have written on this blog before about the tendency for news outlets to over-report potential harm social media might bring. Think of the scares around so-called cyber-bullying or sexting. We have tried to point out that social media has also provided wonderful examples of social support, such as outing street harassers or the “It Gets Better” project. This same fallacy to view new communication technologies as only disruptive and unhelpful seems to have played out in the UK when Cameron ignored the positive use of social media and again in San Francisco where officials ignore the important role these technologies play in helping bystanders get through potentially chaotic situations.

Why such a biased view?

I think it is a basic question of fear and institutional survival. As I commented in the post preceding this one, we are driving towards a basic conflict between mediums.

A historical, hierarchical and human mediate network is ceding place to a radical, decentralized, digitally mediated one. I can see here a playing out of videodrome's New Flesh concept. As people move their lives towards interactions mediated by the new digital network, the power and pertinence of old human networks are waning. As we are seeing over and over again, these legacy systems cannot keep up and respond to collective actions originating in the new medium. I think the draconian responses we are seeing today from traditional organizations come from this reality, from fear of their own waning importance and effectiveness. The fight becomes about survival, and about shutting down the new medium, to try and take advantage of their existing power to strike out at a nascent thing. In my opinion, it is too late though. All I can imagine them accomplishing is the acceleration of their own demise, and probably a vast increase in the tension which will accompany it.

[...] digital to more effectively create change. I’ve also looked at how the Anonymous BART protests followed the same path. Predictably, the UK Riots and the subsequent clean-up effort did the same. This all follows my [...]

Sousveillance and Justice: A Panopticon in the Crowds » Cyborgology — November 9, 2011

[...] and digital cameras) coupled with the multitude of accessible mass distribution platforms is a powerful tool against police brutality and other kinds of abuses. While it is not nearly as powerful or robust as the socio-technical [...]

[...] represented in our Skyrim characters? Is retweeting an #ows rally location a political act? How is access to the Internet related to free speech? These are questions that some of the greatest minds of our day are contemplating. I know some [...]