In my previous post on “Digital Dualism Versus Augmented Reality,” I lay out two competing views for conceptualizing digital and material realities. Some view the physical and digital as (1) separate, akin to the film The Matrix, or (2) as an augmented reality where atoms and bits are increasingly imploding into each other.

I prefer the latter, and want to apply this augmented paradigm to the revolutions occurring in the Arab world that have been taking place this winter as well as the subsequent debate over the causes. I, like many others, am equally frustrated by those who give either all or none of the credit for these uprisings to social media tools and argue instead that what is occuring is an augmented revolution.

On one side there are those that promoted the phrase “Twitter revolution” during the June 2009 protests in Iran and continue to reduce subsequent unrest in Tunisia, Egypt and elsewhere as being social media revolutions. To define a revolution in terms of a micro-blogging service is disrespectfully, insensitively and incorrectly reductionist to those on the ground, yelling, marching and being shot at in the streets.

On the other side are those like Malcolm Gladwell who swiftly dismiss how massively important social media truly are both symbolically and strategically to these uprisings. Gladwell states that people with grievances will always communicate and organize. Therefore, how they do so is not as important as why they did so. Unfortunately, such organization does not just happen; people have to make it happen and that is why it remains an important topic. People like Martin Luther King Jr and Mohandas Gandhi spent a great deal of effort outlining specific strategies for their movements. These strategies have been subsequently replicated by others, including the recent Egyptian movement whose organizational work accomplished what many in their country wanted done for decades -and much of this was done online. 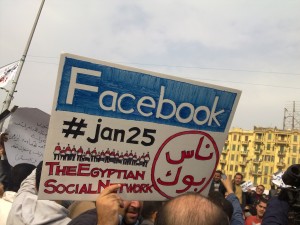 Thus, this is no more and no less of a “Twitter revolution” than a Tahrir Square revolution. Let’s move past the reductionist binary and acknowledge that what we are seeing is an augmented revolution, one that utilizes both the physical and digital. Social media plays a key role, but so do the physical bodies standing in the streets taking up physical space, making speech heard not just through speak-to-tweet but also from voice to ear.

For instance, while a small revolutionary force was organized using Facebook in Egypt, specifically on Wael Ghonim’s We Are All Khaled Said page, the group expertly morphed its message once it took to the streets. The Egyptian resistance used web tools as well as physical space, and most importantly, they did so by looking at the intersection of both. They used the web to inform people how to behave in physical space, e.g., what to do with tear gas containers, who should stand in front of the crowds and how the crowds should move about the city.

It makes little sense to argue about whether these are social media revolutions or not. Instead, we should recognize them as augmented revolutions. Only then can we debate just how and how much of a role the digital aspect played.

We also spoke to WYPR about this issue.

Zeynep Tufekci provides my favorite explanation of the overdetermined nature of these revolutions.

This post is masterfully written, and extremely helpful. The visualization provides evidence for the argument that reality is beyond these binaries. A healthy skepticism of opposing claims is in order; a synthesis that can be substantiated is better.

Interesting. But with that definition in mind, I then struggle to see the difference between social media as we now know it and traditional media which have also been used to repress and foment unrest

I am thinking of radio which has historically been used as a low cost way for rebellious groups to disemminate their messages. Which in turn has led to these uses being subverted - for example, the CIA establishing faux rebel radio stations in Central America.

Or Tom Paine and his revolutionary pampleteering complemented by more traditional views in the same media. Leading to an active Twibbon style campaign against him by the sale and wearing of stamp out the traitor boot nails.

I could go on but I keep returning to the idea of the real issue being a human and a personal one of power as Ghandi I think understood and exemplified. With media operating simply as an amplifier.

Just because an amplifier and loudspeaker can also include a feedback loop, this to me, doesn't make media the issue - except perhaps to media theorists?

Am I missing something?

PS sorry for mispelling etc writing from my smartphone :)

Pete I agree that the use of social media is akin to the use of pamphlets and the radio. It would have been wrong to call any uprising a "radio revolution" because that uprising would have also included much that happened off the air.

However, I think that social media is a technology of a slightly different sort. It is this space where people share identities, socialization, ideas, pictures, facts about their lives, etc to such a high degree that the Internet has come to be a powerful space of interaction far greater than previous media technologies. Perhaps the difference is more quantitative than qualitative, but I do not think that the idea that our very reality (including our selves and our revolutions and much else) must be considered an 'augmented reality' composed of atoms and bits would have made much sense prior to digitality.

I am certainly not saying that something interesting isn't going on. I suppose I just want to understand more precisely what it is.

I am something of a fan of Doug Engelbart (http://en.wikipedia.org/wiki/Douglas_Engelbart) who I guess would see the potential of social media in enhancing collective intellect.

If that is what you mean by augmented revolution then I can see that social media technologies *accelerate* the process (which also happens, in my view, with pamphlets and radio and even papyrus) of the *sharing and development* of revolutionary ideas.

To me this process takes place largely *outside* the medium itself - it is the offline reflection (and support building) that leads to a new burst of media activity.

And it is that offline reaction and building of support - essentially a human process of understanding our own power - that is critical - not the media activity itself.

Of course, ubiquity (everyone having smart phones for example) also means the messages are more widely received and processed. Everyone then has a chance to do that reflection.

But in my view not everyone will, and what controls that more than the media itself, are the conditions of the society - its values, its education, its essential freedoms, its humour etc.

"And it is that offline reaction and building of support – essentially a human process of understanding our own power – that is critical – not the media activity itself."

this is my critique of Gladwell: he argues that the conditions that caused revolution are more important than the strategies undertaken and thus dismisses those that discuss these strategies. but surely strategies are important even if not one's main concern. applied here, surely online strategizing was important (see the actual post for examples), even if you believe what occurred offline to be more critical.

in any case, i'd like to make a further argument that the introduction of social media into a country provides symbolic power to the people. being allowed to create content, to make one's voice heard, to access information from around the globe comes to be seen as symbolically important in addition to practically important. people come to feel empowered through the very act of tweeting to the globe even if that tweet happens to fail to reach many screens. i give this example as a counter-argument that social media only amplifies that which occurs offline.

Yes, to a large extent I agree with you; and I really like your last point Nathan.

I think you are right the availability of social media *is* symbolic; and it symbolises certain of the strengths in society to which I refer - its essential freedoms, for example.

That gives me hope, as social media more generally give me hope: we have the potential in pretty much all societies to raise our game and use our personal power better for the good of us all.

You are also right to question me on picking out the human, internal process of reflection and understanding over the online strategies we use to share that understanding.

It *is* partly a personal bias. Having been involved in the worlds of both media and psychology, pragmatically I find dealing with my own internal world, rather than the world outside me, more fruitful.

But you are right: of course, both parts (and many more) are important and worthy of study.

It always seems to me, however, that I have more *leverage* over what I do and say; as opposed to the valuable activity of defining theories of how the world works.

I think this is perhaps what Ghandi and other great leaders knew - that long periods of contemplation and "self-adjustment" are necessary to allow the already unstoppable changes in own own worlds to come to fruition.

I don't mean that in some kind of "spiritual" way. I mean it in a psychological sense, of changing the way we see the world, and the paradigms and frames we use - something more akin to David Bohm's view of thoughts, thinking, and unfolding.

And, for me, the media *are* always to some extent secondary in that process. A great idea will always out, I believe. When the time is right. And the people are ready.

very cool thoughts! though, i do not think great ideas will naturally come out. but i would agree that they *tend* to. but at each stage is humans getting their hands dirty and making that happen (for better or worse).

The concept of an augmented revolution dovetails really nicely into that concept of the digital as extension of the self, rather than a separate expression of it.

Our digital presence is integrated into our whole concept of self, and thus our digital expressions are merely as any other, akin to every other medium used in revolutionary tactics, although differentiated by its speed and responsiveness.

Revolutionary action will take any medium it can, but each medium opens up new possibilities of action. I'm reminded of the use of radio by those in Tahrir square to connect watchers on the rooftops of buildings to those in the center, to watch for attacks, and communicate strategy. Whatever works is what is used, but the new media online certainly opens the doors to many new possibilities in action.

[...] is just as wrong as silencing individuals in physical space (indeed, as we know, the two have blurred into each other). Further, journalists increasingly rely on citizens to take pictures, videos and [...]

[...] the crowd decides what the future looks like. If a twitter backchannel can help organize entire revolutions it can unseat the visions of big corporations in favor of the little guy. If you read tech blogs [...]

[...] is augmented revolution. It is a tactic, and is one that is becoming increasingly refined. Those organizing the #occupy [...]

[...] intersection of the two can effectively mobilize massive numbers of people. The tactic of  augmented revolution is becoming increasingly refined. Those organizing the Occupy protests learned from the Egyptian [...]

[...] to Tahrir Square, Cairo. protestors charge their mobile phones; augmented revolution. infographic: Twitter users are said to influence each other if they follow each other, shown with [...]