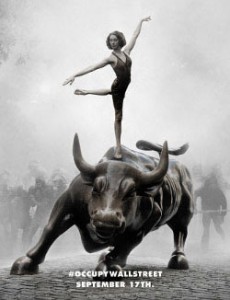 On September 17th, Wall Street was occupied. It was occupied by the bodies of about 500 protesters. The protests, aimed at the unjust hierarchical distribution of resources, were explicitly modeled after the Arab Spring, utilizing social media and a “leaderless” structure to organize a democratic revolution. Unlike the reality of the Arab Spring, however, protesters were asked to remain peaceful as they occupy downtown Manhattan for months to come. They aim to swell their numbers up to 20,000 or more.
What I find interesting about this, is the strategic emphasis on spontaneity, the romanticizing of the grass roots element, and framing, by organizers, of this event as something of a “social media” revolution. This is interesting because these protests are highly organized–not spontaneous. Organizers even went through a “practice run” before the day of the main event. Moreover, the protests do not stem from a small group of renegade revolutionaries, but are linked to established organizations–especially Adbusters, who launched the call for this protest months in advance.

Yes, they use social media as a tool to augment the protest (aspiring revolution?). This is clear if we look at the content and activity on twitter for #OccupyWallStreet and #TakeWallStreet. If the protests continue, then certainly social media will play a crucial role in the organization of protesters, the framing of events, and the direction of future actions. However, Twitter (or Facebook, or any other social media platform) is not the seed from which this protest stemmed. This begs the question: why the over-emphasis on social media?

I would argue that social media is emphasized for several reasons:

First, it links domestic protests to the successful revolutions in Arab nations, and so links American protesters to those who fought to overrun oppressive regimes.

Second, it plays on our fantasies of the internet as a public sphere –a space in which all voices are equally heard.

Third, it romanticizes the protests. Social media is the “grass root” of our time, it is the symolic counter-point to ‘The System’ that protesters are fighting against.

Finally, social media makes the experience hyper-real for each protester. By giving and amplifying individual voices, protesters are not just followers of the revolution, they are each revolutionaries. Moreover, as a matter of practice, this status as a revolutionary can be documented and publicized through status updates and tweets that call for action. Protesters can then truly see themselves in this glorified role, as they simultaneously project and come to know themselves through their social media reflections.

Interesting reading your thoughts on social media making the experience hyper-real for each protester.

Although i dont have much to add to the conversation, could i point you in the direction of this good link on radical activism:

Feel it perhaps presents a nice counterpoint. OR perhaps how through the use of social media, the issues presented are being addressed.

[...] Court  ruled that filming police officers is protected under the first amendment. As we have covered before, social networking sites are very powerful tools for protestors. They are organizational tools for [...]

some have said that the Occupywallstreet crowd have tried to look like the Arab Spring in order to give a heightened sense of importance/numbers. do you agree? if so, might this be a rare example of astroturfing used for good?

also, you mention that some are overemphacizing the role of social media - who is doing this? any examples of a general trend?

definitively agree that protest in the age of social media allow for more involvement. protesting with a smartphone in your hand makes you more active in producing the protest, not just passively consuming it. perhaps we should write something on the 'prosumer protest'? of course, all protest is prosumer (just being a body in the crowd makes you, in part, a producer of the protest); but with new technologies the role to produce the protest has greatly expanded.

Thanks for the comments, Nathan. Great as always!! I do agree that the connection to the Arab Spring is strategic in creating a sense of importance around the protests, and that indeed, this might be an example of astroturfing used for good.

The dangerous thing about this link is that the Arab Spring protests fully upended entire institutions and was met with harsh violence by government and police forces. To frame the movement in this way, primes both police and protesters to be distrustful of each other, leading potentially to undue use of violence and/or provocation on both sides (as we're already seeing).

As for the over-emphasis on social media, I say this in reference to the website itself, as well as to most news stories covering the event. They often equate the protests with the #OccupyWallStreet hashtag, glossing over the heavy institutional planning that led to to the meaningful construction of this hashtage.

You are right on with the prosumer protest. If you want to write something on this I'm totally down.

I think the social media are like the air we breath. We live, think and act through them, but because they facilitate everything we do, they have no special meaning (other than distinguishing these times from times past). There cannot be any social movement now that doesn't use social media. Yet, a specific kind of power is generated by social media, the power that results from people speaking and acting together and developing a capacity to act in concert, as Hannah Arendt understood the true meaning of political power. When this becomes visible for whatever reason, small things can lead to big consequences. Occupy Wall Street, thus has great potential and is communicating a fundamental message from the left. The people should lead, http://www.deliberatelyconsidered.com/2011/09/the-people-should-lead-the-meaning-of-the-occupy-wall-street-movement/

Great points, Jeffrey. What you say about the pervasive role of social media in everyday life really reflects what we talk about on this blog as 'augmented reality' (http://thesocietypages.org/sociologylens/2009/10/05/towards-theorizing-an-augmented-reality/).

It is particularly interesting that you say social media comes to mean nothing outside of a communication mode that distinguishes these times historically, and yet has a power of its own...a true implosion of meaning with material consequences. Does this mean that this cultural historical moment is imbued with a particular kind of power, one which enables the accomplishment of freedom/political power?

P.S. Thanks for the link, your piece is great!!

Jenny, thanks for the appreciation. To answer your question: I think there is a kind of power that is now ascendent, what I call "the politics of small things." It is a kind of power that Hannah Arendt conceptualized as political power as the opposite of coercion. I don't agree with her on all points, but I do think that she pointed to a power that thanks to social media is becoming more and more consequential. It is evident today in the Occupy Wall Street movement, but also evident in the Tea Party. I am working on this now. Actually today, I am working on a post on the Candle Movement in Korea. And fyi, the great post I linked to was by Scott Beck, not me.

There is a connection between what you are doing here and the forum I am trying to create at Deliberately Considered. Let's explore ways to expand the conversation.

[...] promote the cause, networking massive numbers of people and allowing the movement to go viral (see Jenny Davis’ post on the differing roles of top-down organization versus the rhetoric of “grassroots” for this [...]

#OWS and the Formation of Rhizomatic Associations » Cyborgology — October 7, 2011

[...] shoehorn OWS into existing frames, smaller outlets have provided excellent commentary and insight. Jenny Davis was the first on this blog to write about the movement’s use of social media. Since her [...]

[...] Goldfarb by jennydavis, seconds ago at 12:46 pm A couple of weeks ago, I wrote a post about the OWS movement. Jeffrey Goldfarb, from the blog Deliberately Considered, provided insightful comments on this post [...]