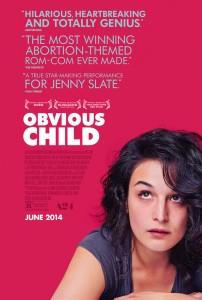 The comedy Obvious Child hit theaters last Friday, and it’s been praised as “the most honest” abortion movie Slate‘s Amanda Hess has ever seen. Honest, in that the film’s protagonist Jenny Slate decides to have an abortion and goes through with it. Her relationship does not implode, she does not suffer crippling guilt, and she survives. Her life goes on. It turns out that this kind of straightforward portrayal is a rarity in American film and television, though millions of women have abortions every year (the Guttmacher Institute pegs the number of worldwide procedures at about 42 million per year). In a recent Contraception article, a pair of sociologists report that pre-Roe v. Wade era plotlines disproportionately featured the death of women characters who even thought about abortion. After abortion’s legalization, portrayals came to suffer from a different distortion: “These movies tell us that it was wrong [before Roe] for laws to dictate what a woman ought to do with her body, but now that she has the choice, she should choose to give birth except under the most extenuating of circumstances,” Hess writes. Obvious Child rejects, well, the obvious.

Watch the trailer for the film here.

Want a better marriage? Spend more time with your spouse

Marriage in the U.S. today: the best is better, but the average is worse, according to psychologist Eli J. Finkel in an opinion piece for The New York Times. (Without further clarification, this appears to be a discussion of heterosexual marriage.) Finkel reports that the happiest couples are happier both with their marriages and in general, while the average married person is less satisfied and likelier to divorce than in the past.

That’s because we are sizing up our spouses in the era of the “self-expressive marriage,” Finkel explains, drawing on the ideas of sociologist Andrew J. Cherlin and historian Stephanie Coontz. No longer are we satisfied with our family life as a means to filling our bellies, providing shelter, or even giving us love–many of us now expect marriage to yield “self-discovery, self-esteem, and personal growth.”

Marriages fall short of this ideal, Finkel argues, in part because people aren’t putting in the time with their spouses required for satisfaction. Whether it is working more or parenting more intensively, the average couple is logging hours elsewhere. And the divorce rate is higher for poor, less educated Americans, whose lack of time and energy for sustaining high-quality marriages Finkel attributes to exposure to trends such as “unemployment, juggling multiple jobs, and so on.”

Finkel devotes a quick sentence to government and workplace policy solutions (perhaps discussed in more depth in the forthcoming scientific write-up). As far as what individuals can do, Finkel’s advice boils down to a) spend more time together or b) if more together time isn’t possible, consider looking to marriage for love rather than for self-expression.

On CNN.com, sociologist Michael Kimmel weighs in on the veracity of the latest declaration of a “war on men” by author Suzanne Venker (writing for FoxNews.com).

Rejecting the oh-so-popular tactic Venker employs—“Blame it on feminism!”—Kimmel argues that men still dominate, but attempts at equality may have been disorienting for a group used to a status quo that disproportionately benefits them:

I thought of how painful it is when you are used to having everything to now have only 80%. What a loss! Poor us! Equality sucks when you’ve been on top—and men have been on top for so long that we think it’s a level playing field.

Sass aside, Kimmel writes that equality is what many men want, based on the interviews he did with young men for his book Guyland: The Perilous World Where Boys Become Men. Kimmel refuses to let Venker speak on men’s behalf when she calls for women to “surrender to their nature—their femininity.” Instead, he calls for rethinking what makes forsatisfying gender relations:

Who says we can’t be happy with fully equal female colleagues and coworkers? Who says we can’t enjoy the joys of shared parenthood? Who says that we are biologically programmed to be both rapacious testosterone-driven animals and lazy remote-hogging couch potatoes unable to lift a finger in the kitchen?

Venker paints a most unyieldlingly awful portrait of men, one that is happily belied by actual, real, American men. And we won’t stand for the sort of male-bashing Venker offers. We want it all also —and the only way we can have it all is to halve it all.

And the Diploma Goes To…

Graphic Sociology’s Laura Norén recently posted an illustration of who is earning degrees in the U.S., highlighting the growing percentage of women earning bachelor’s, master’s, and professional/doctoral degrees since the 1970s. Her engaging graphic also pointed out the percentage of degree earners by race, relative to the proportion of each group in the overall population.

TSP was pleased to see that the graphic and Norén’s analysis, which drew on data from the Department of Education and the Census Bureau, caught the eye of Andrew Sullivan over at The Daily Beast, bringing a sociologist’s take on the collegiate gender gap to an enormous public audience. Click through to see Sullivan’s post.

The Occupy movement’s strength is its theatrics, argues Todd Gitlin, author of Occupy Nation: The Roots, the Spirit, and the Promise of Occupy Wall Street, on the Possible Futures blog of the Social Science Research Council.

The “anarchist post-punk core” of Occupy has been more about expression than mission from its start, writes Gitlin, a professor of sociology and journalism at Columbia University. Thus, the play that took place on May Day was a natural expression of Occupy’s spirit:

Occupy, in other words, is primarily an identity movement, and identity movements face inward. They aspire to be cultures, self-sufficient and gorgeous. People don’t join Occupy, they do it. It’s a way of life, a transvaluation of values. Joining in such a life is, to a few tens of thousands of people nationwide, an intense form of disaffiliating from the main currents of American society and culture. It means not only disaffection from plutocratic control but making oneself at home with the movement’s own solidarity.

TSP and other social scientific sources are swimming in great information about the Occupy Wall Street movement, so be sure to check out some of these additional sources and add your own favorites in the comments!

According to well-worn stereotypes, boys who have sex are “players” or “studs,” while girls who have sex get stuck with nastier labels. But in a recent New York Times editorial, sociologist Amy T. Schalet argues that boys in the U.S. seem to care much more about romance—and avoiding pregnancy and disease—than they did 20 years ago.

Rates for 15-to-17-year-olds who report having sex have dropped since the 1980s, according to the Centers for Disease Control. “And there are virtually no gender differences in the timing of sexual initiation,” Schalet writes.

She offers a few rationales for the change, based on survey data and her own research:

Fear seems to have played a role. In interviewing 10th graders for my book on teenage sexuality in the United States and the Netherlands, I found that American boys often said sex could end their life as they knew it. After a condom broke, one worried: “I could be screwed for the rest of my life.” Another boy said he did not want to have sex yet for fear of becoming a father before his time.

In fact, Schalet writes, boys seems to be more preoccupied with negative outcomes than girls. She suggests these fears grow out of sex education and an awareness of AIDS, while the drive to have sex with another person might be, in part, quelled by access to Internet pornography.

Schalet suggests there could also be a positive reason American boys are hurrying less to have sex. It might be “because they have gained cultural leeway to choose a first time that feels emotionally right. If so, their liberation from rigid masculinity norms should be seen as a victory for the very feminist movement that Rush Limbaugh recently decried.”

“Womanly” at Work, “Manly” at Home

Men who work in majority-female professions—say, as nurses or as kindergarten teachers—don’t also take on more traditionally “womanly” tasks at home, according to new research in the American Journal of Sociology.

Husbands working in “gender deviant” fields actually put in more hours on “manly” chores when they’re off the clock, study author and Princeton University doctoral student Daniel Schneider found, when compared with men who work in more gender-balanced fields. “They putter around with the cars, take care of the yard, fix things around the house—you know, guy stuff,” wrote Bonnie Rochman, covering the study in Time.

Schneider found that the wives of these men also put in more time on typical women’s housework such as cooking and cleaning.

“It’s counterintuitive in a sense,” Schneider told Time. “Maybe what we’re seeing here is that men who are gender-deviant in the market are doing compensatory action at home by doing more typically male chores.”

Schneider’s AJS study looked at heterosexual couples in the U.S., using census data to calculate which occupations were predominantly female and information on individuals’ occupations and time spent on housework from the National Survey of Families and Households and the American Time Use Survey.

Online Matchmaking May Not Lead to Long-Term Love

Just in time for Valentine’s Day, a dose of unromantic social science: dating sites that promise to help you meet your match may be asking the wrong questions to create lasting pairs.

Social psychologists Eli J. Finkel and Benjamin R. Karney summarized their soon-to-be published findings in Sunday’s New York Times. The gist of their argument is that the factors that help relationships last — “things like communication patterns, problem-solving tendencies and sexual compatibility” — can’t easily be captured in the surveys people take before they couple up.

None of this suggests that online dating is any worse a method of meeting potential romantic partners than meeting in a bar or on the subway. But it’s no better either.

What Percent Are You?

Find out how your income ranks in different parts of the U.S. with this interactive graphic from the New York Times. Needless to say, what earns 1% status in New York is not the same as in Flint, Mich. Data comes from demographic researchers at the Minnesota Population Center at the University of Minnesota.

A breakdown of the jobs of the 1%, featured over on Sociological Images, is part of the same Times package.

OWS, the Course: Available only at NYU

Columbia University was going to offer a course on Occupy Wall Street this spring, the New York Post and others reported last week—but it looks like that announcement was premature.

The anthropology class at Columbia was to be called “Occupy the Field: Global Finance, Inequality, Social Movement.” However, administrators said the course didn’t go through the necessary faculty approval process in order to be offered this spring, according to Bwog, the blog of Columbia University’s monthly undergraduate magazine, The Blue and White. Hence, the course is no longer listed among the department’s offerings for the semester starting Jan. 17.

Students at NYU, though, will be able to get credit for studying the movement in an undergraduate course in the Department of Social and Cultural Analysis, taught by Professor Lisa Duggan.

“Occupy Wall Street has done us all the service of illuminating [the fact] that the economy operates within the framework of political, social and cultural conflicts, and not outside them,” Duggan told Washington Square News, NYU’s daily student newspaper.

The university will also offer a graduate course on OWS with Professor of Sociology Jeff Goodwin.