*For a look at the patterns that have emerged in the police shootings of unarmed black citizens since the shooting of Michael Brown in Ferguson click here.

An unarmed black man is killed by a police officer in Charleston, SC. So far this sounds like an all too familiar story. A tragic one. However, unlike with the other recent deaths of Michael Brown in Ferguson, MO, Eric Garner in Long Island, Tamir Rice in Cleveland, Akai Gurley in New York, John Crawford in Ohio, and others, (all unarmed black men killed by police) in this case the police officer has been fired and charged with murder.

On Saturday, April 4th, (2015) in North Charleston, SC 50-year old, black, coast guard veteran, unarmed male, Walter L. Scott was stopped for a broken tail light. According to the police officer’s account, after the traffic stop, Mr. Scott fled on foot and was pursued by officer Michael Slager. The officer removed his Taser in order to subdue Mr. Scott, but Mr. Scott knocks it from his hands and ran away. At this point, the officer claims he felt threatened so he drew his weapon and fired eight times at a fleeing Mr. Scott (click on image above for video). As he was running away from the officer, the victim was struck by four bullets in the back and one in the ear. IN THE BACK.  Scott died on the scene. Basically given the death sentence for a broken tail light. The officer was more concerned about handcuffing the shooting victim than providing any attempts at life saving first aid. 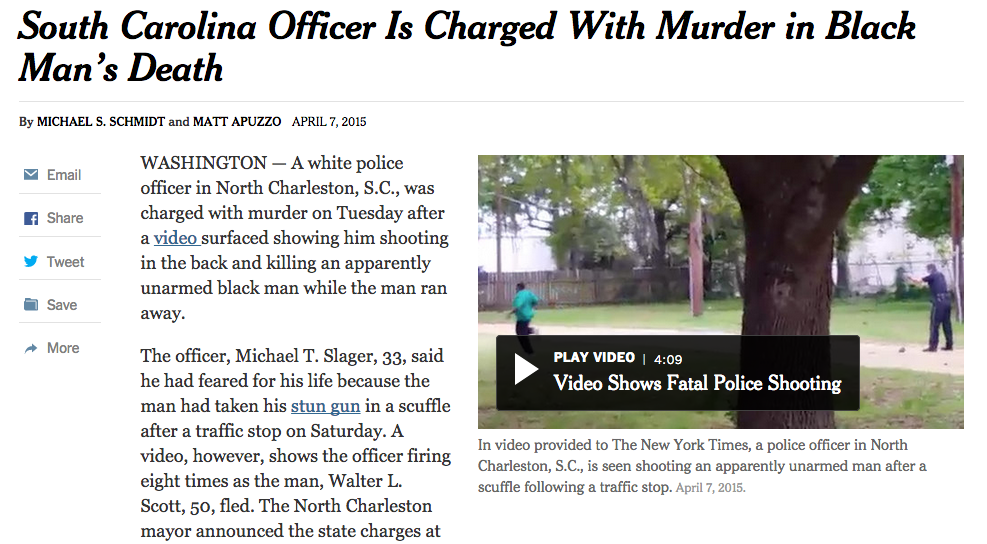 At one point in the video, the police officer is seen returning to the scene of the earlier confrontation, picking up the Taser off the ground, walking back and dropping it near the unarmed black male that now dying.

The difference in this case is that the officer has been fired and charged with murder. In most of the other cases (see the list above) the police officers that killed unarmed black men were not charged. One exception is police officer Peter Liang of the NYPD, who was charged with manslaughter for shooting to death Akai Gurley in the stairwell of an apartment building. That trail continues. While the actual outcome of the forthcoming murder trial of 33-year old officer Michael Slager is yet to be determined, the murder charge is a welcome change to a disturbing trend. 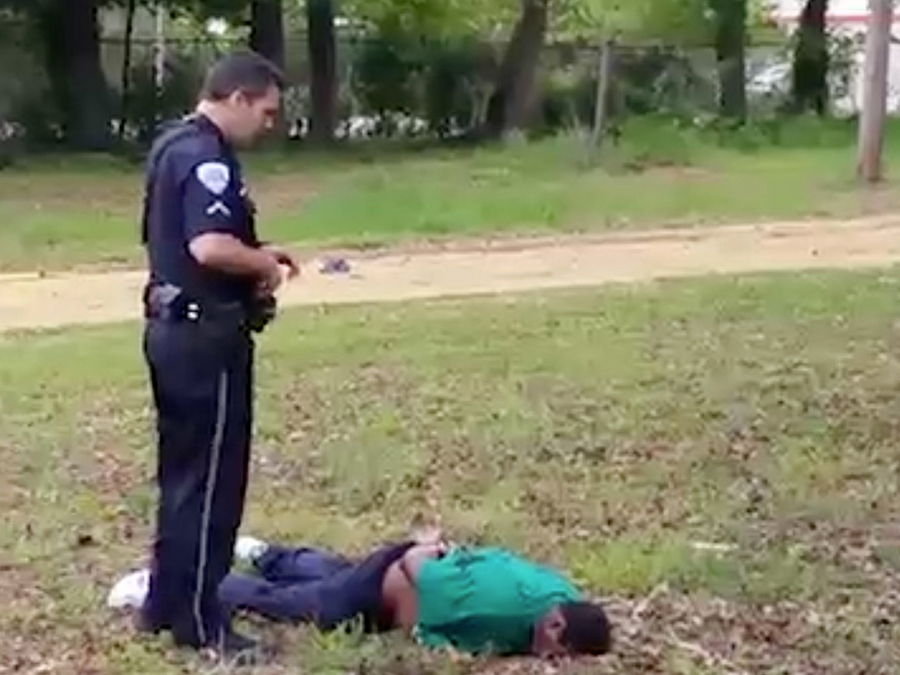 I think a good argument could be made that the #BlackLivesMatter protests across the country following Michael Brown‘s death and again after Eric Garner and Tamir Rice were killed by police officers may have begun to alter the decisions of public officials to press charges…to see the deaths of unarmed black men (or anyone) at the hands of well-armed police officers as problematic and unjust. Rather than give the police a free pass to use force whenever they subjectively feel threatened, this case shows that what constitutes a “threat” should (and actually can) come under scrutiny. In this case, the “threat” was more than ten feet away, fleeing away from the officer, and was unarmed.

As the mayor of North Charleston, Keith Summey was quoted as saying, “When you’re wrong, you’re wrong. If you make a bad decision, [I] don’t care if you’re behind the shield or just a citizen on the street, you have to live by that decision.”

Similar to Ferguson, the North Charleston’s city’s police force is only 18% black while 45% of its residents are black. At the same time, 80% of the police force is white, while just 37% of the city’s population is white. 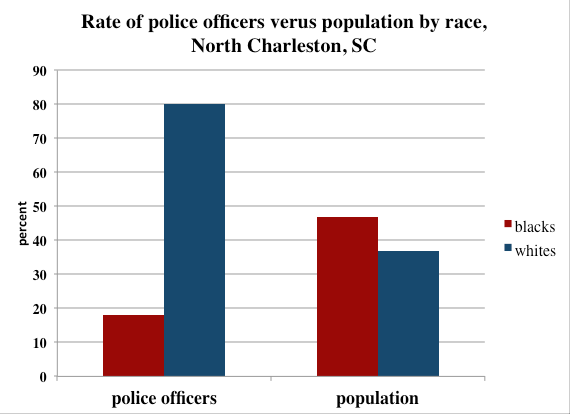 Protests in the streets are not lawless, unorganized people just out to make trouble. Protests are organized events, full of rational citizens who’s concerns have not been addressed through traditional formal political channels. Protests can and in this case did generate news coverage and bring the issues to the attention of the general public. Protests disrupt the complacent. While not involving the police, when Trayvon Martin was killed by George Zimmerman, it took protests to even get a special prosecutor to charge Zimmerman with murder six weeks after the killing. 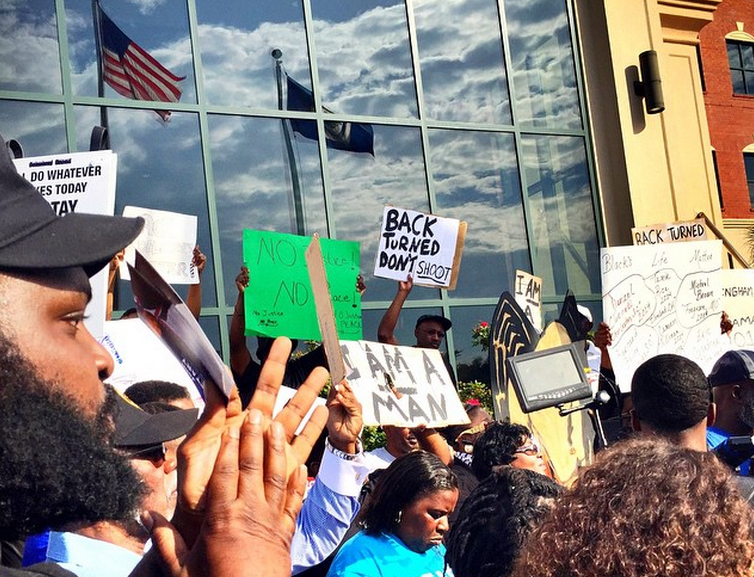 Another way to think about it is…Do you think that a white male mayor in the deep South would have so quickly and come to the same conclusions in this case if the Black Lives Matter protests had not been so significant following the earlier deaths? I doubt it. Protests brought this case forward and have kept it in the minds of Americans. That being said, if the protests will be able to capitalize on the attention and formulate more sustainable organizations is yet to be seen. Read more about that here.

Again, while a guilty murder verdict is far from assured, just the fact that the police officer has been charged with murder is a sign that black lives do in fact matter… that said, next time the officer could just use methods that do not end the life of an another unarmed black male.

“But data shows that the response to Slager’s case is a rare exception. Between 2010 and 2014, according to Columbia, South Carolina’s the Statenewspaper, at least 209 suspects were shot at by police in South Carolina, including 79 people who died. In only three of the 209 cases were officers investigated for misuse of force, and none have been convicted.” (click on the photo below for the full story at Mother Jones) 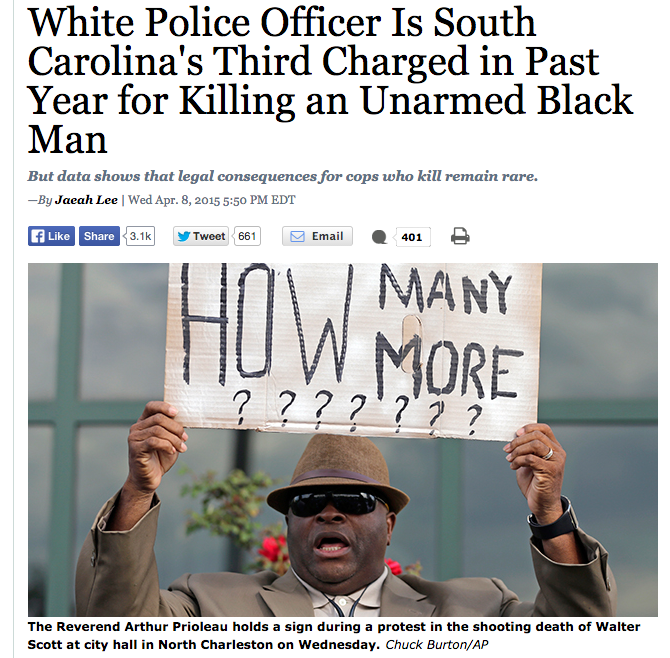 “What isn’t unusual is the race of the victim. Of those 79 people in South Carolina who were fatally shot by police, 43 percent (34 people) were African-American. That’s a higher proportion than the African-American share of the state’s population, which was 29 percent in the 2013 census population estimates.” (read more here) 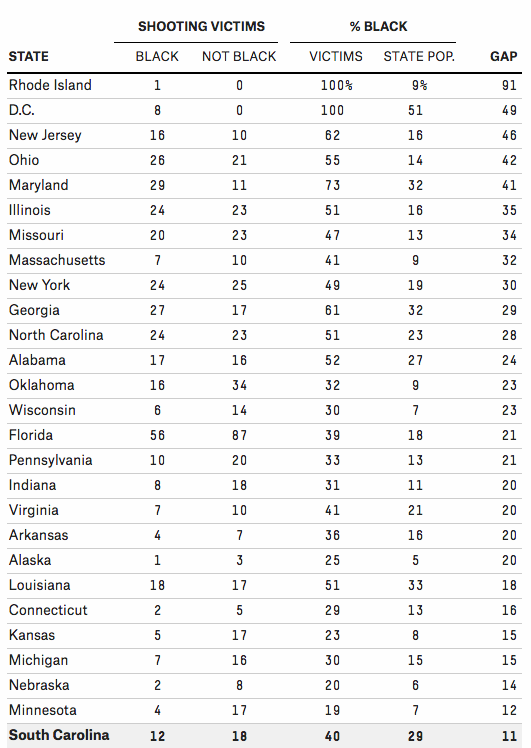 “The shocking nature of the South Carolina shooting, so vividly captured on the video, ought to put police departments on the same side with the protesters who are demanding change.” – TIME magazine 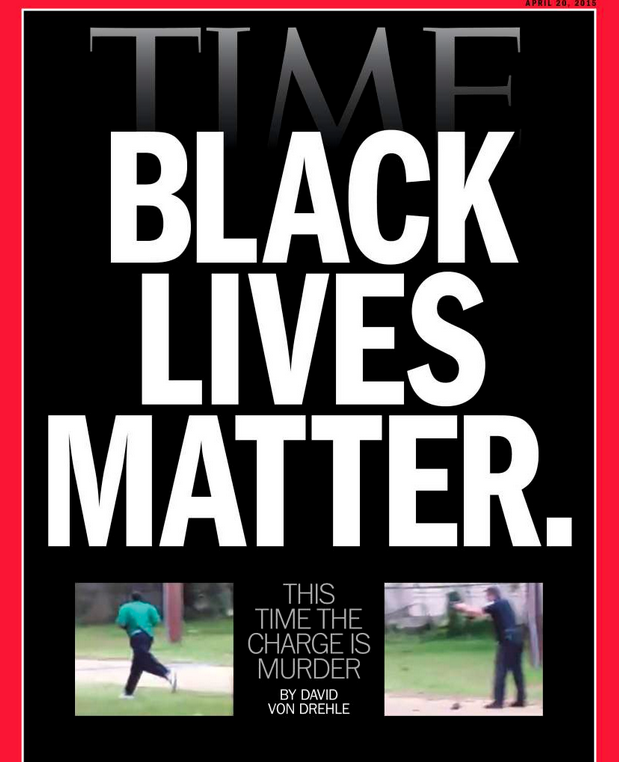 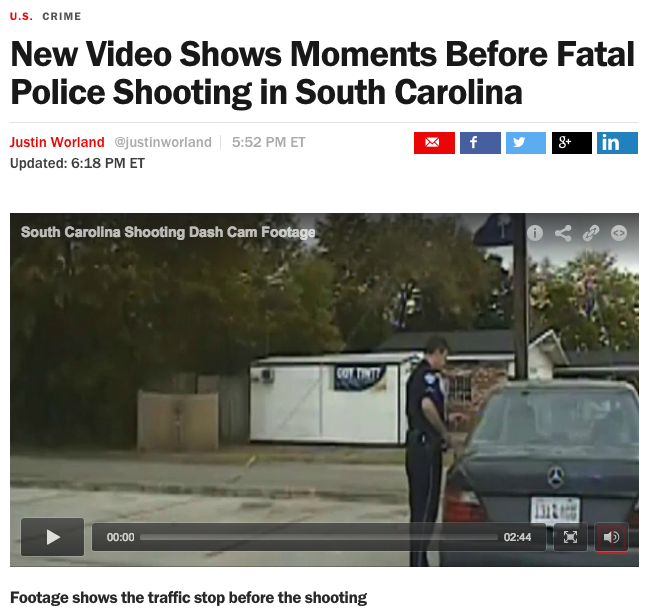 Further evidence of the Black Lives Matter movement keeping the topic in the press and the public. “…[Walter] Scott’s shooting is not an isolated incident, but the result of a history of exclusion in North Charleston.” 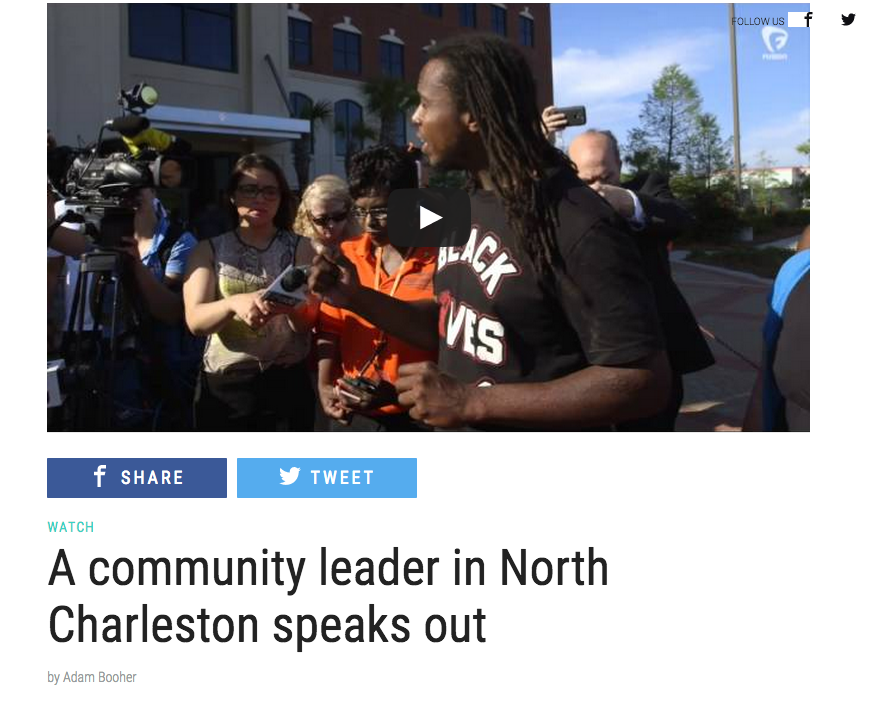 “The real question is why, death after death, beating after beating, as the major abuses and the minor humiliations pile up, we are collectively unable to face the fact that race makes too many police officers see threats where none exist, and makes the worst police officers, like Michael Slager, willing to deal death. The police beating, outside Detroit, of a fifty-seven-year-old black man named Floyd Dent made the news only after footage surfaced of an officer apparently planting an incriminating bag of cocaine. It takes a video to make the apparition disappear.” Read the full commentary here 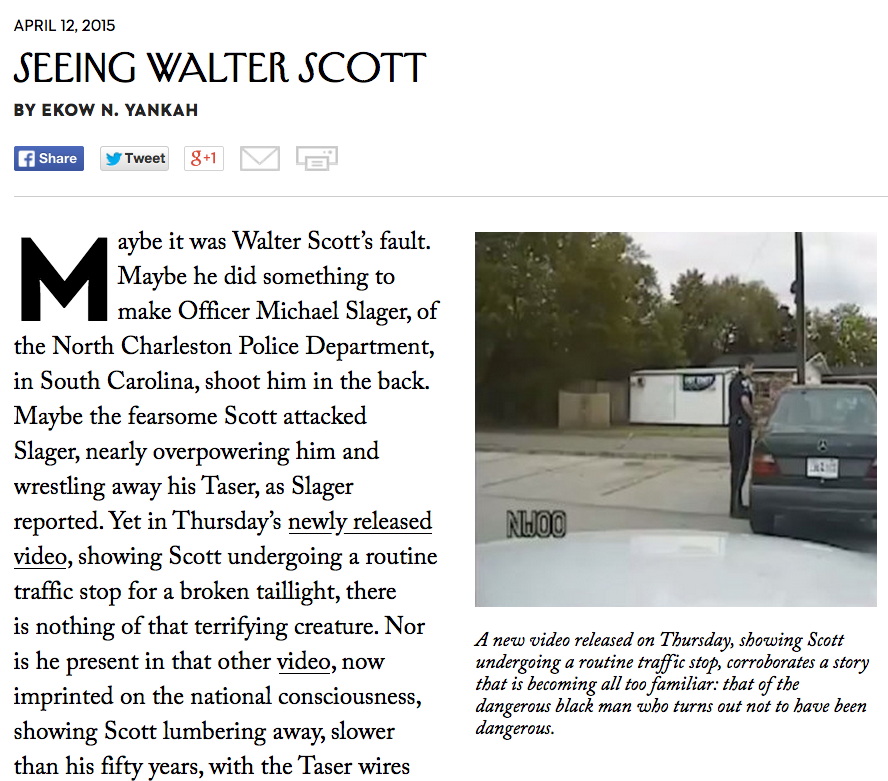 Police shootings of unarmed black men are more common in part, because other forms of social support have been slashed by neoconservative polices and the void has been filled with a police officer with a gun.

“Were we justified in sending them?” At some point, Americans decided that the best answer to every social ill lay in the power of the criminal-justice system. Vexing social problems—homelessness, drug use, the inability to support one’s children, mental illness—are presently solved by sending in men and women who specialize in inspiring fear and ensuring compliance. Fear and compliance have their place, but it can’t be every place.” Read the excellent piece by Ta-Neshi Coates in full here. 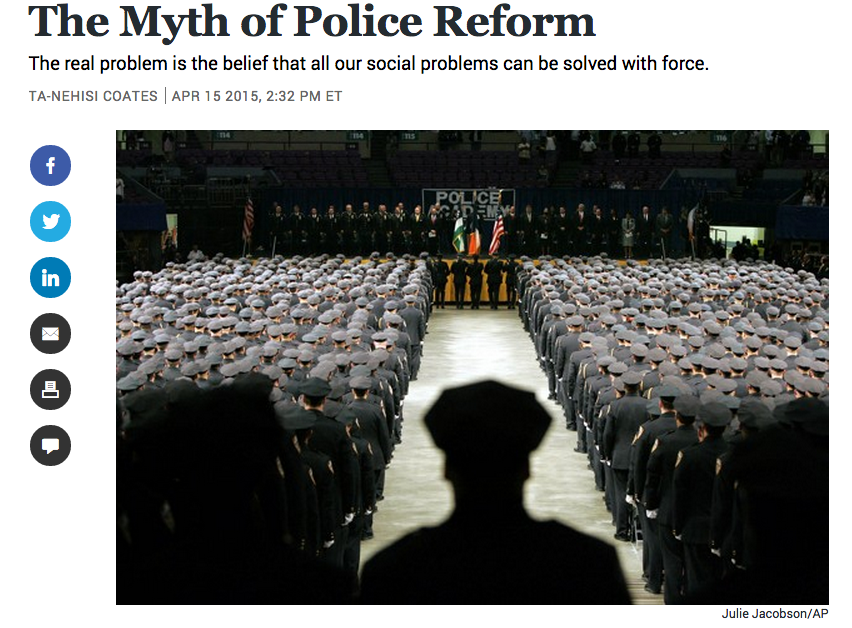 The officer who shot Walter Scott in the back eight times, killing him, has been in jail since the murder. Today a grand jury indicted him on murder charges (there is only a single type of murder in SC) and he will face trial.

Another case of an unarmed black male who was killed by police. In this case Jonathan Ferrell was seeking help after getting a car accident. White neighbors called the police. They shot him. At least…at least they are bing charged. 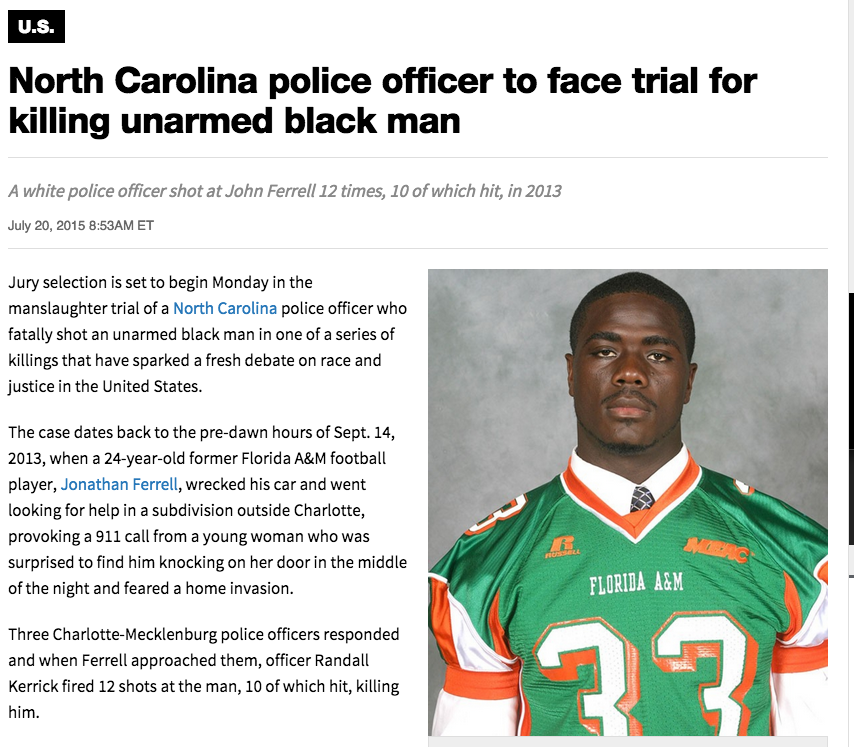 […] media attention, in large part because of either the video coverage of the death (Eric Garner, Walter Scott, Laquan McDonald, and others) or the subsequent protests (Freddie Gray in Baltimore and Michael […]

[…] media attention, in large part because of either the video coverage of the death (Eric Garner, Walter Scott, Laquan McDonald, and others) or the subsequent protests (Freddie Gray in Baltimore and Michael […]