THE SUPER BOWL: A sociological view

Break out the guacamole, it is time for Super Bowl sociology!

What does the Super Bowl mean in our society? It is far from simply a sporting event or even just the final game of a season.

The Super Bowl is a sociological phenomenon.

It is a great teachable moment using an event that everyone has at least heard of and many of our students will be watching… or at least at a social event where the game is playing on the television. While many of our students will be highly engaged in the event, few may have thought about it from a sociological perspective. Below are some interesting resources from sociology and other disciplines that can help reveal the sociology in the Super Bowl.

First, The Society Pages own Doug Hartman has an excellent review piece in Contexts from back in 2003 examining sociologists’ explanation of the role of sports, football in particular, in socializing us into what it means to be “manly”. As Hartman writes, “Sports provided them, as young boys and teens, with a reason to get together, to engage with other boys (and men), and in doing so to begin defining what separates boys from girls: how to act like men.” Boys play sports in large part because it is where they can be social with other boys. As a child it is also an opportunity to spend time with older brothers and fathers. See the full article for many more roles that sports play in maintaining masculinity and a good list of recommended resources.

Fast forward to adulthood and we attend Super Bowl watch parties because that is where we can be social with others. Imagine how quiet the dorm floor will be on Sunday night. “Where is everyone?” They are with others watching the Super Bowl. The pressures of socialization strongly encourage us to go hang out with everyone else watching the game even if we don’t like, care about, or have any clue about the game. Try explaining to someone that you don’t want to go because “the Super Bowl promotes a violent hegemonic patriarchy and the commercialization of our leisure time (see more below).” I promise that you will at least get a weird look. One site claims that only 5% of viewers watch the game alone and the average number of people at a Super Bowl party is 17. This data would need some critical analysis before being taken to heart, but it is interesting. We watch the Super Bowl collectively, socially. Rejecting that opens you up to social sanctions. We watch it together so much that cities with teams in the Super Bowl see a rise in flu deaths due to the increased interaction of people. Watching the Super Bowl together generates a sense of social cohesion to such a degree that, à la Durkheim, researchers have found that suicide rates on more recent Super Bowl Sundays are lower than the Sunday before and after the Super Bowl. 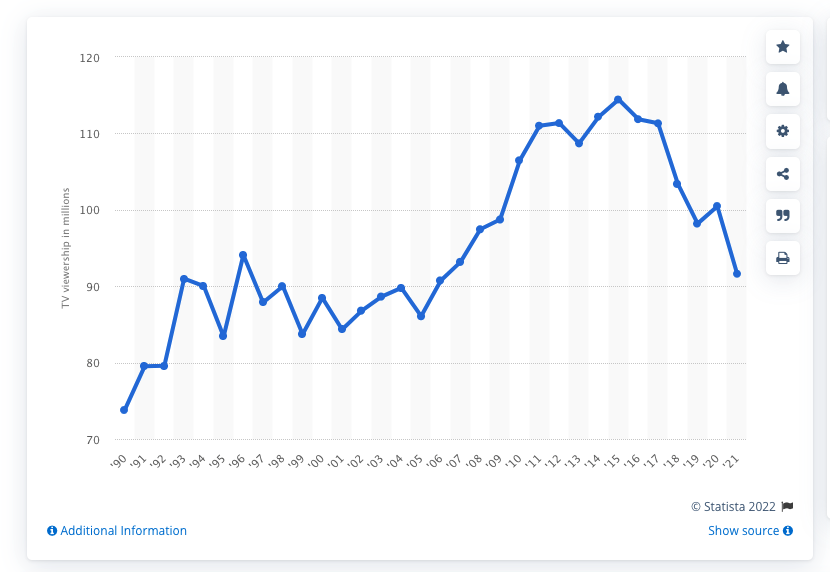 There is a socially determined way you watch the Super Bowl and cheer on your team. Watching the Super Bowl is different from watching a Broadway musical. Cheering on your team involves active support as the event is occurring. We yell, “go, go, go!” when our team’s running back breaks away from a tackle. We may even get so excited that we spill some beer or knock the chips over. We don’t do the same at musicals, even if you feel like you wanted to.

The Super Bowl is also a great place to watch gender roles in action. To demonstrate the sanctions around gender roles ask your female students to see what happens when they cheer on a team with the same intensity and aggression as the male students in the room. Do others respond to such aggressive cheering by the females with, “Damn Jane, take it easy.” When females become “too aggressive” or impassioned, do they breach the boundaries of what it means to be feminine? Are they subject to subtle or overt verbal sanctions?

Are men and women watching the content of the Super Bowl for the same reasons? John Clark, Artemisia Apostolopoulou and James Gladden’s 2009 article, “Real Women Watch Football: Gender Difference in the Consumption of NFL Super Bowl Broadcast” examines this question and we can draw sociological conclusions from it. Women viewers ranked the commercials, a celebrity singing the national anthem, and the halftime entertainment as more important than the average male viewer who rated the teams playing, the competitiveness of the game, and the postgame show as more important. Women viewers were more likely to agree that the performance at halftime enhances their enjoyment of watching the Super Bowl and the main reason they watch the Super Bowl is to see the halftime entertainment. On average, men even reported that they thought the halftime entertainment made the actual game unnecessarily long.

Then there are the ads. The next day when people talk about the Super Bowl they often talk about their favorite ads. The media certainly continues to cover the ads as content during the following week and beyond. The ASA TRAILS teaching resource (now free to all ASA members) has an activity posted by Carla D Ilten, a graduate student at the University of Illinois at Chicago. Drawing on the work of Horkheimer and Adorno, the activity ties in Super Bowl ads to Critical Theory.

“In this media activity, students will learn to watch advertisements through the lens of Critical Theory. Students will discover how ‘the whole world is passed through the filter of the culture industry’ and distinguish the fun and amusement of this genre from the cultural messages of inclusion and exclusion it entails. This media activity is intended as an in-class exercise that follows a lecture on Horkheimer and Adorno’s text ‘The Culture Industry. Enlightenment as Mass Deception’ (1944). It uses a hit list of ’10 funniest Superbowl commercials’ to facilitate students’ active recognition and understanding of central Critical Theory concepts such as the ‘commodity character of culture,’ consumerism, totality and alienation, as well as amusement, fun, entertainment as vehicles for repressing resistance and mitigating powerlessness.”

However, the social acceptance of football is changing. As the correlation between brain injuries and football grows, former players, parents, and fans are questioning if the sport is worth it. Documentaries, including Frontline’s League of Denial, and based-on-real-life dramas, such as Concussion starring Will Smith, have emerged in the media. Former players are also speaking out.  For example, star player Chris Borland walked away from a $3 million contract after just one year out of fear of long term damage to his own brain. He states on the Frontline website (also see a related video): “The idea that just the basis of the game, repetitive hits, could bring on a cascade of issues later in life, that was, it changed the game for me,” he says. “I couldn’t really justify playing for money and I think what I wanted to achieve put me at too great a risk so I just decided on another profession.” Organizations have formed, such as, Mothers Against Concussions and parents are thinking long and hard before letting their children play football. See here and here for articles examining parents’ dilemma.

Others are even beginning to argue the game has become immoral. Dave Bry wrote in The Guardian, “… it’s not the players who I am calling immoral. The onus is on us, the fans (and, more directly, the team owners) who pay the players to hurt themselves for our enjoyment. Huge amounts of money, let-your-parents-retire-and-set-up-the-next-generation-of-your-family-to-go-to-college money, ‘make him an offer he can’t refuse’ money. The money is there, so if one 20-year-old does muster up the sense to say no, there’ll be 20 others waiting in line to say yes.”

Based on increasing concerns about brain injuries and long-term damage, normative sanctions of shaming have begun to crack the all-American image of football.  A class action lawsuit was brought on behalf of retired players and the NFL and the NCAA. The NFL agreed to pay up to $5 million to each retired player that had suffered brain injuries. The idea that at least some of the players in the upcoming Super Bowl will go on to have life-endangering brain injuries will certainly loom in part over this year’s game. Unless the rules are changed or technology develops “safe” helmets, the game of football and subsequently the Super Bowl will begin to take on additional social meanings, ones tainted compared to the raucous celebrations of today.

“Pass the chips please and can we watch something else?”

(CLICK THE IMAGES BELOW TO BE TAKEN TO THE RESPECTIVE PAGES: 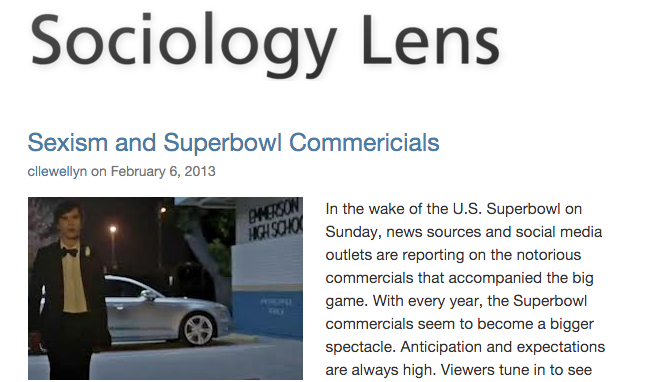 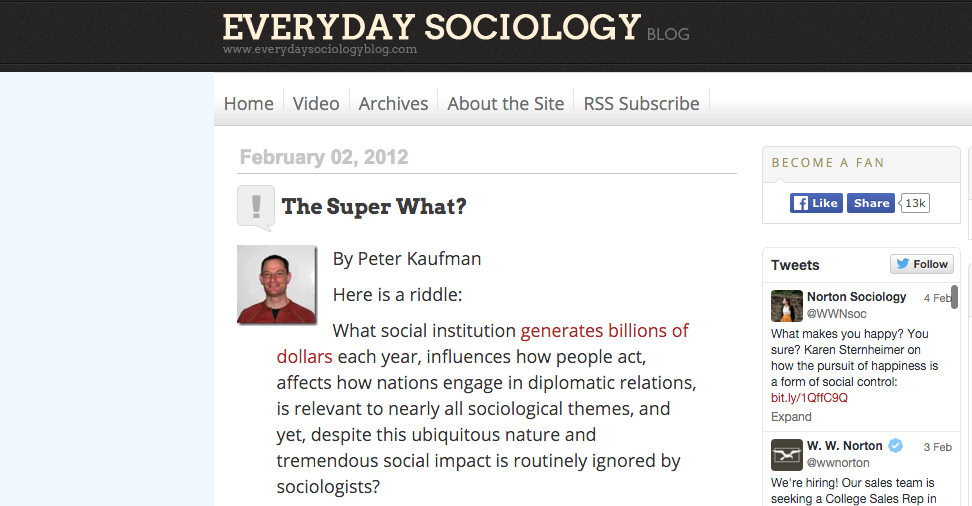 Links to help you think about (or avoid thinking about) Super Bowl 50 | Memoirs of a SLACer — February 7, 2016

[…] Sociology Toolbox on the Super Bowl as a sociological phenomenon. […]

[…] the spring semester, I help students understand the sociological imagination by analyzing the Super Bowl through this lens. While certainly not all students are interested in professional concussions […]