SOCIAL CONSTRUCTION OF THE BODY: The nipple

Examples of the social construction of the body are prevalent in the media’s objectification of the female body in particular. See the famous documentary Killing US Softly 4 for numerous patterns in the media. The biological body has purposes driven by genetics and “human nature”, but the meanings we as a society apply to the body are not fixed, “natural”, or static. They are socially constructed.

The nipple is a great example. Biologically, both men and women have nipples, albeit with slightly different levels of functionality. However, socially the symbolic meaning of men’s and women’s nipples is dramatically different in most societies. Women’s nipples are sexualized, objectified, censored, and stop Super Bowl halftime shows. 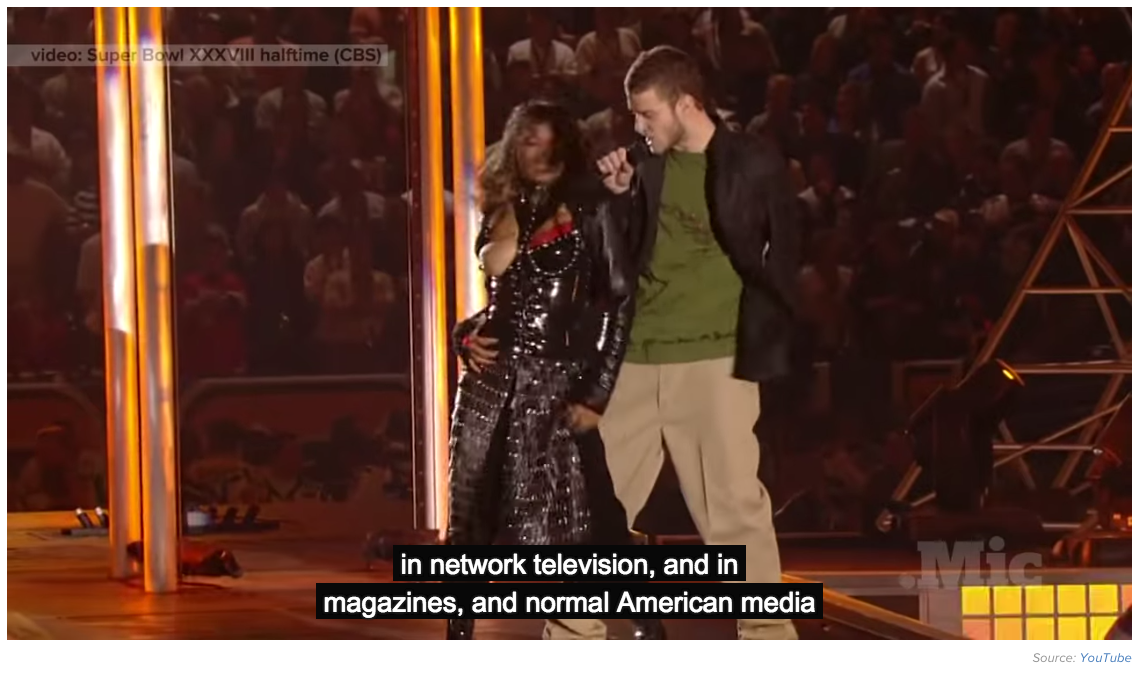 Men’s nipples get to be on display… when we’re running, doing yard work, in yoga class, in primetime television, and in advertising. 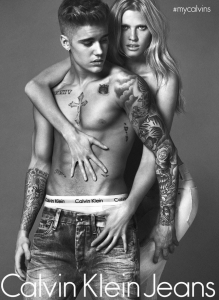 The media website, Mic recently did a feature on a campaign called “Free the Nipple”. In the campaign’s own words, “Inspired by true events, Free The Nipple follows a group of young women who take to the streets of New York City topless, to protest the archaic censorship laws in the United States. Activist Liv and With set out to start a movement and change the system through publicity stunts and graffiti installations while armed with First Amendment lawyers. The film explores the contradictions in our media-dominated society, where acts of violence and killing are glorified, while images of a woman’s body are censored by the FCC and the MPAA. What is more obscene: Violence or a Nipple?” 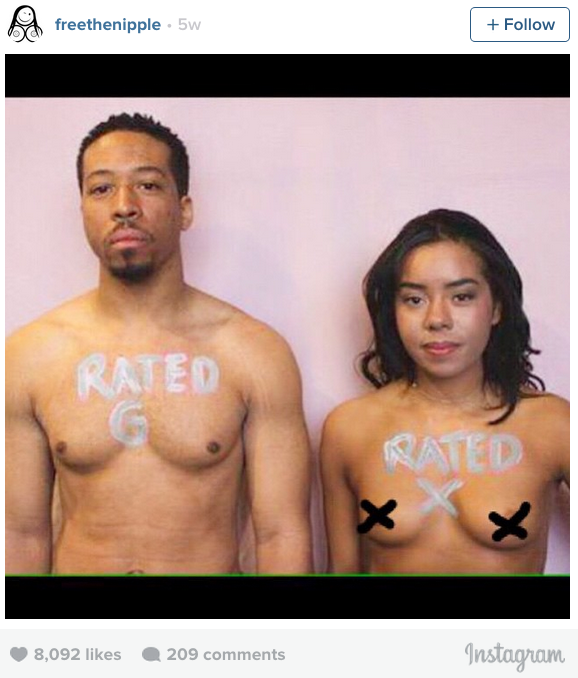 Mic wrote, “‘Women’s breasts are not the problem,’ Soraya Chemaly, one of the activists who lobbied Facebook to end the censorship of women’s breastfeeding photos, told Mic. ‘Sexual objectification is the problem. There’s a difference between sexualization and sexuality. Breasts don’t hurt children, breasts feed children, and it’s the sexualization of women’s bodies that’s actually hurting children the most.'” See Mic’s brief video story of the campaign here.

This is a great example of structure and agency interacting. While individuals can challenge social structure, they will also be subject to the sanctions of society while they try to change it.

The nipple is also tied to breastfeeding. Breastfeeding in public or at work has also been a challenge to our society’s “problem” with the female nipple. (For more about the sociology of breastfeeding listen to this “Office Hours” edition with Julie Artis or read this edition of SociologyInFocus). Forty-Nine states have laws allowing women to breastfeed in any public space. However, to protest the lack of acceptance of breastfeeding by some businesses, women have staged “nurse-ins”. 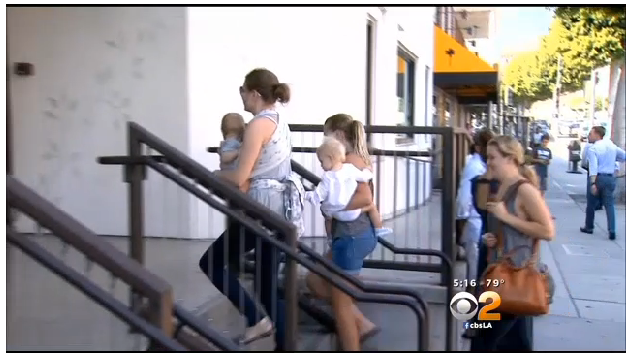 Due to pressure, Facebook has recently changed its rules that previously banned photographs of women breastfeeding.

The social construction of the body may be hard for some students to understand because so much of the body seems to be tied to biology. How we treat nipples depending on who’s body they are attached to demonstrates the power of society.

“Buenos Aires — Last month, three women in a coastal Argentine town decided to sunbathe sans bikini tops. It could have been inconsequential, but a tourist complaint drew 20 police officers and six patrol cars to the beach to threaten the women with arrest unless they covered up. The episode quickly incited a national debate leading to demonstrations called “tetazos,” or “boob uprisings.” In early February, nearly 2,000 women gathered in different places around the country — topless or covered — to demand their right to bare their breasts.” for the full story click on the image below. 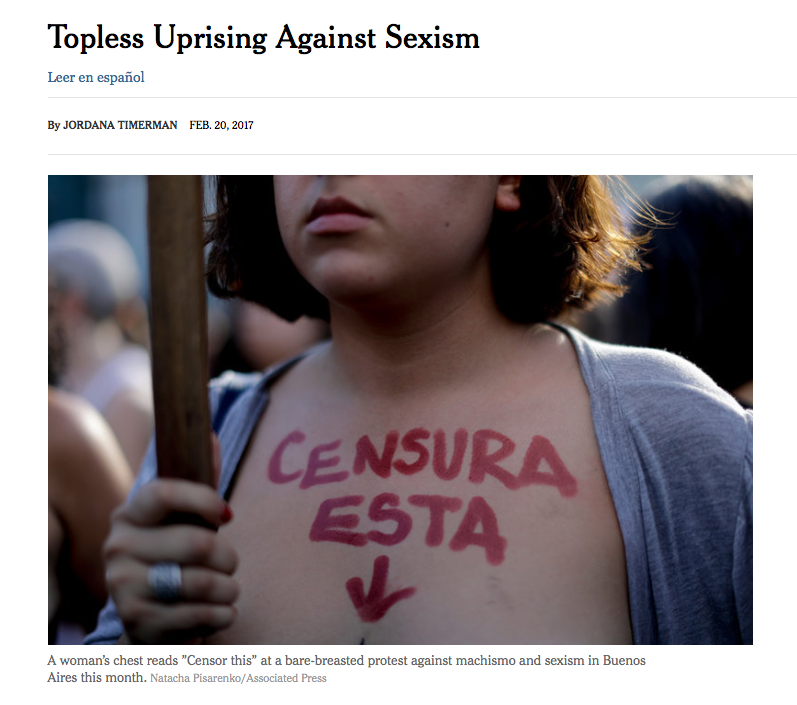 There has been a fictional movie made based on the fight to change society through the #freethenipple movement. See the trailer here: http://freethenipple.com/home-2/ 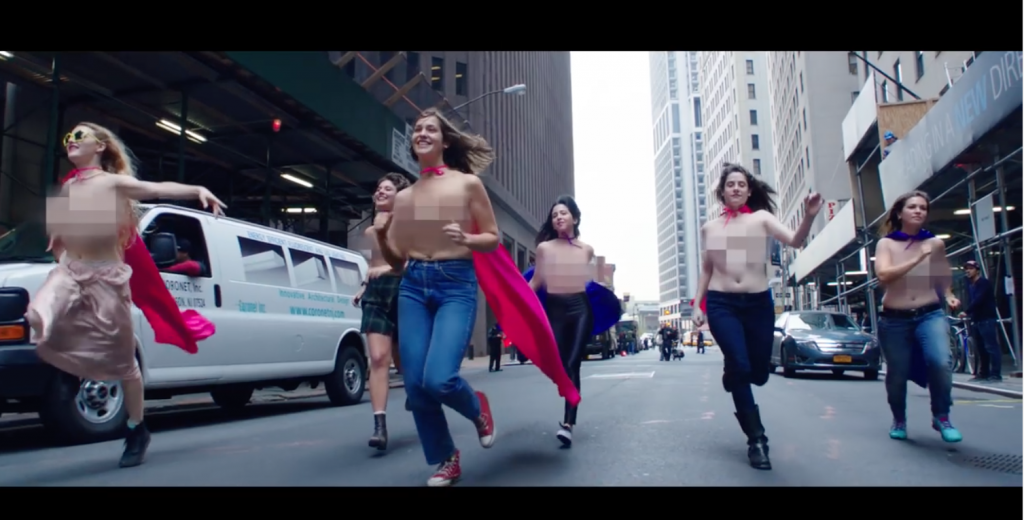 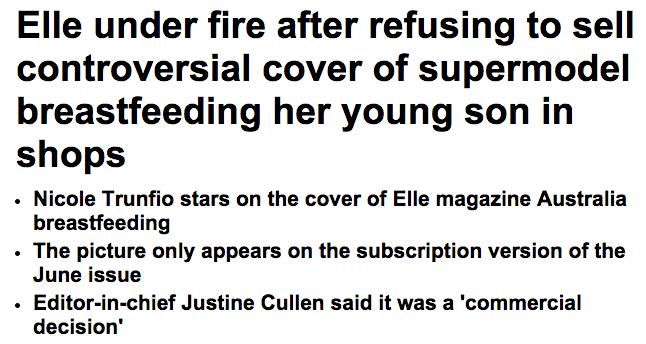 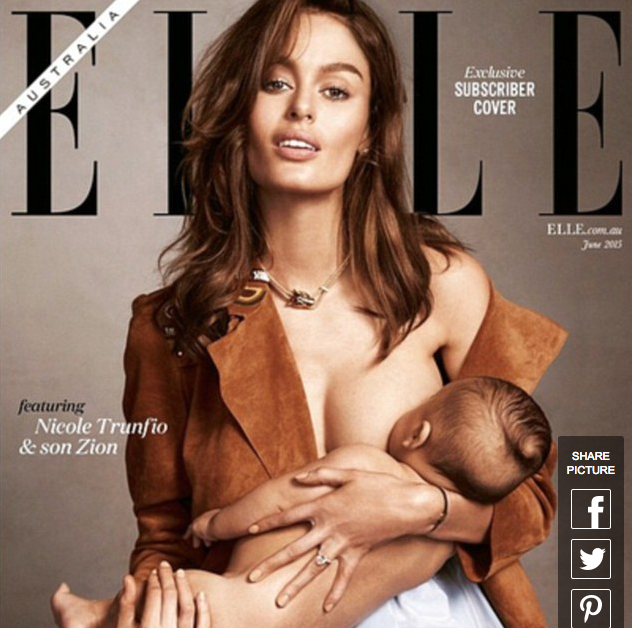 a good laugh regarding breastfeeding from https://www.facebook.com/pages/Pregnancy-Corner/339534484703?fref=photo 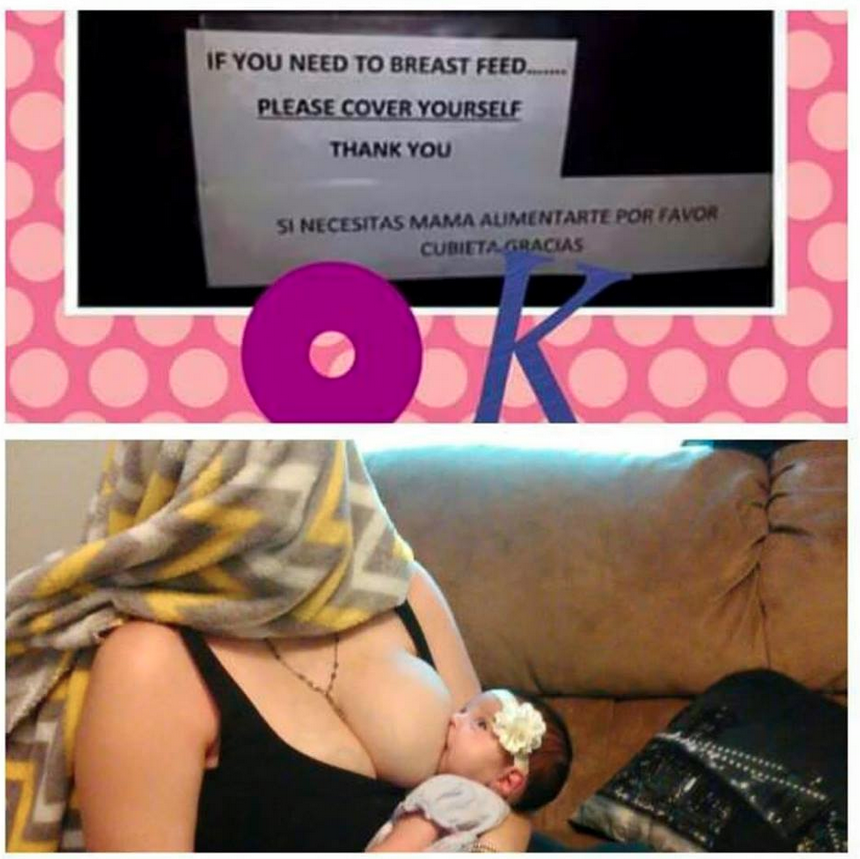 Click on the image below for a short clip from a classic episode from Seinfeld that addresses this issue of the female nipple being “illicit”: 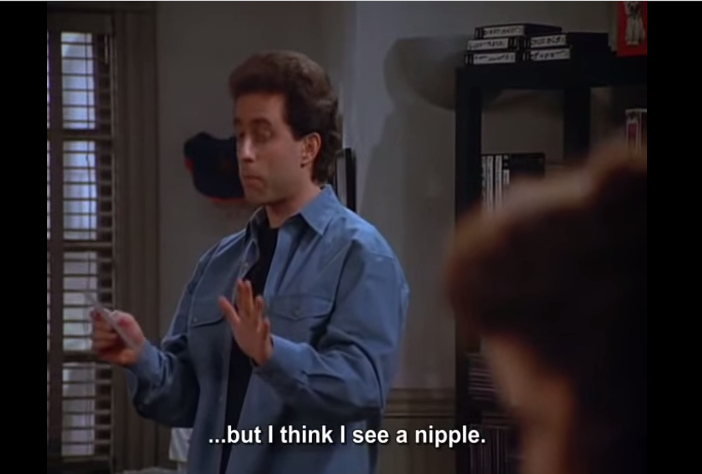 Social media sites like Facebook and Instagram (owned by Facebook) do not allow photos that expose women’s nipples, but men’s are fine. However, absurdly, pasting over women’s nipples with a photo of men’s nipples makes the photos “allowable”.

The culture jamming of images of women’s nipples could also include covering them with painted images of nipples, since that is “acceptable”.

Other images pointing to the gendered social construction of the nipple: 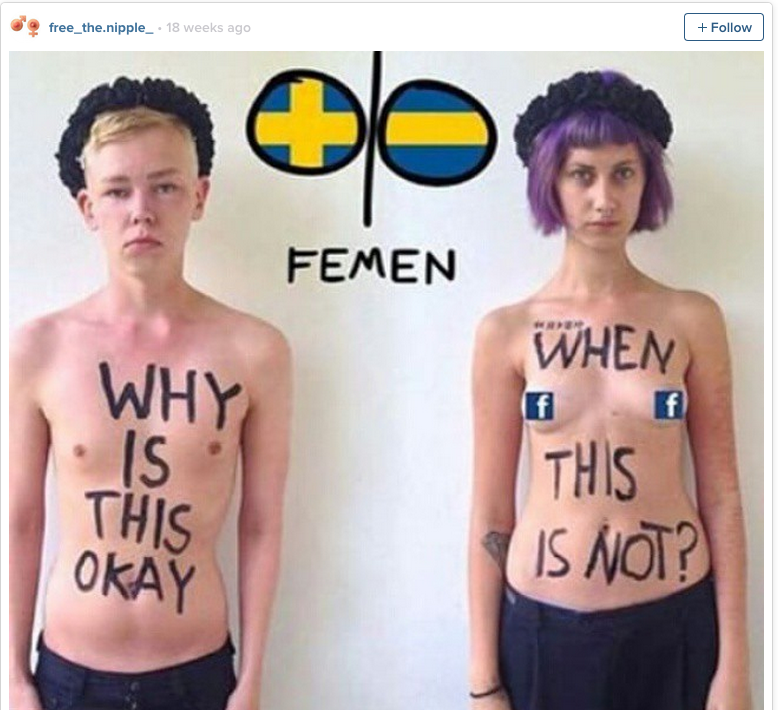 The original artist rendering for use on social media by Micol Hebron: 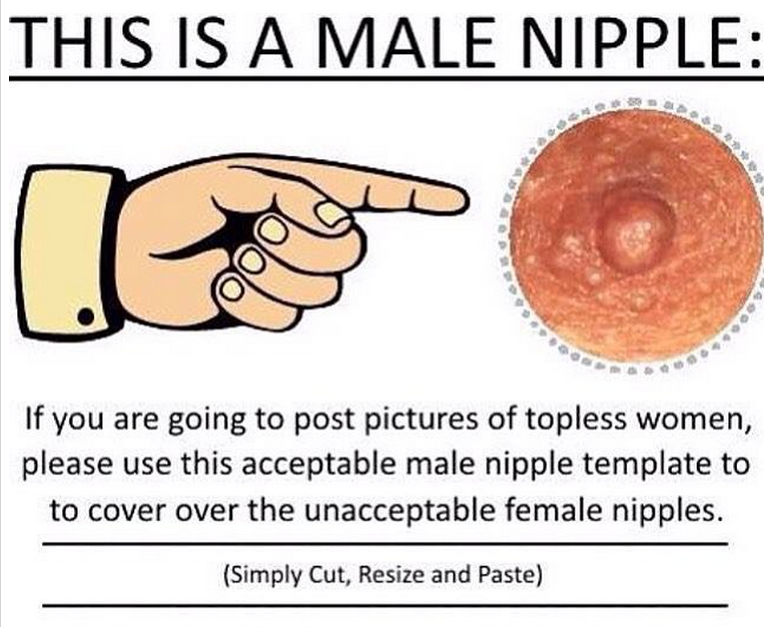 Another interesting twist on this would be to “paste” female nipples on male bodies. And…someone has already done that…

See that and other humorous looks at the types of nipples that allowed on Instagram (click the headline below to go to the full site). 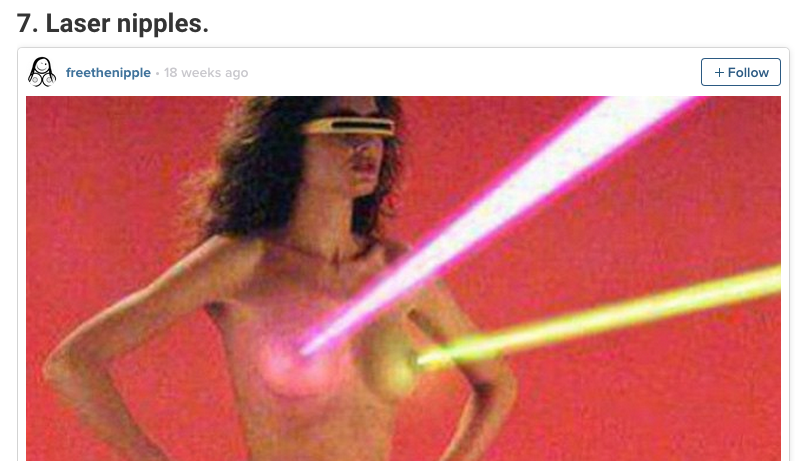 But, will this lead to greater gender equality?

“Can the movement spur the necessary cultural change for gender equality to become a reality?

There’s still a lot of gender inequality, and I feel like this focus on women’s sexuality as a form of empowerment is distracting us from the real issues that exist in terms of wage inequality, parental leave issues, etc. I think it’s a distraction, and it’s not really going to result in women’s empowerment to be able to bare their breasts in public. We need to focus less on defining women by their bodies in my view.”

High profile figures (besides celebrities) have also gotten involved. Icelandic MP, Bjort Olafsdottir Tweeted a photo of her nipple with the caption: “This is to feed children. Shove it up your patriarchy. #FreeTheNipple”.

In the Independent (a UK newspaper) article linked to below she wrote, “As a member of Iceland’s Parliament, you’d probably think this was a big decision for me, and one that would have serious repercussions. In Britain, can you imagine a young female MP doing the same, and how everyone would react? But actually I don’t give a toss about my boob being out there. After all, I’m pregnant right now, and when I give birth to my twins I’ll be breastfeeding wherever and whenever it suits them. My breasts won’t just be on display on the internet – they’ll be everywhere.”

However, the power of social norms around the female nipple are evident in some of the comments following her article:

Interestingly, the suggestion of female nipples on display is increasingly part of the female presentation. Click on the image below for more on this from Lisa Wade at Sociological Images: 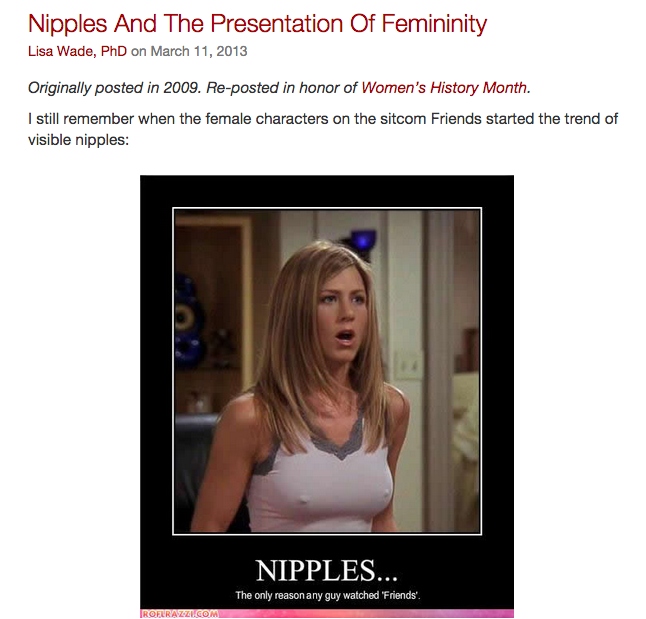 A recent protest was held in New York City, where technically it is legal for women to be topless in public… 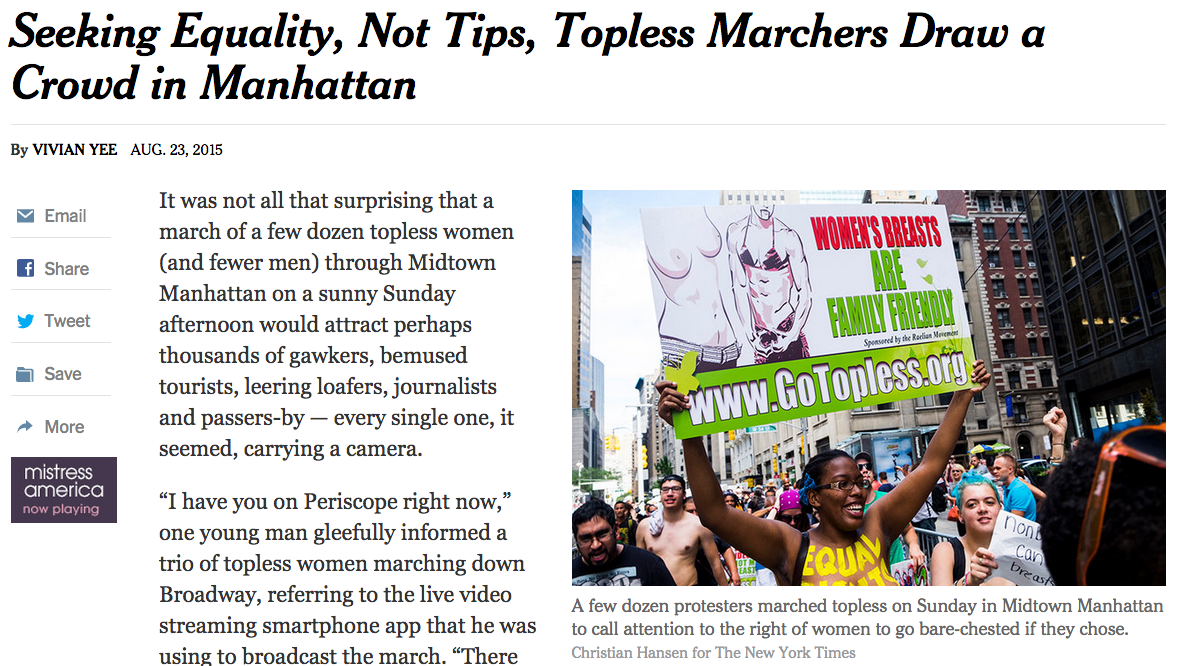 As stated in the article, “Those who did go top-free, however, unanimously recommended the experience — as long as they were around like-minded women. (‘Imagine being the only one,’ shuddered Claudia Simondi, 46, a topless marcher.) ‘It’s liberating,’ said Mandy Aviles, 25, a bartender from Bayonne, N.J., who nevertheless put her T-shirt back on after the march reached Bryant Park, where it caused a traffic jam of people in the park when they realized what they were seeing. ‘There was no shame, no regret, no nothing.'”

A few of the many academic resources related to the social construction of the female body: 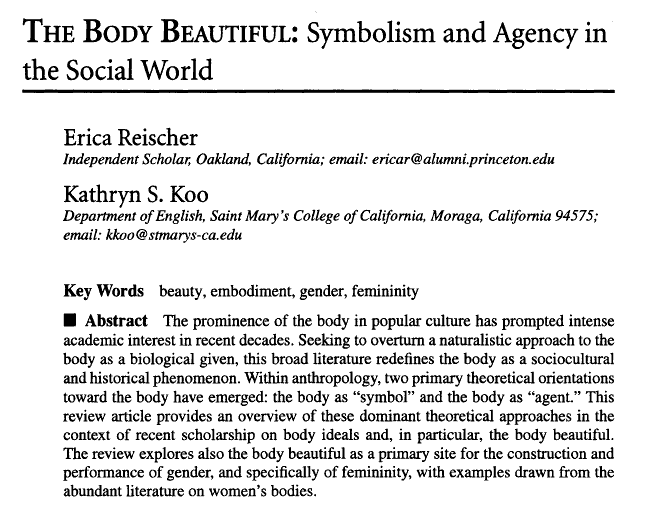 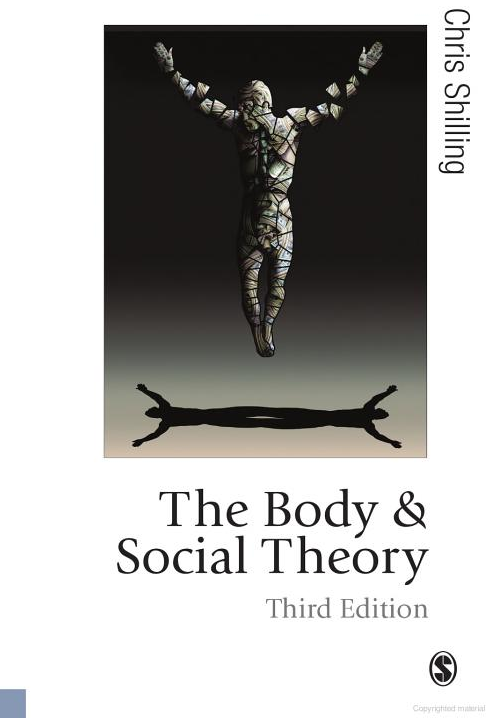 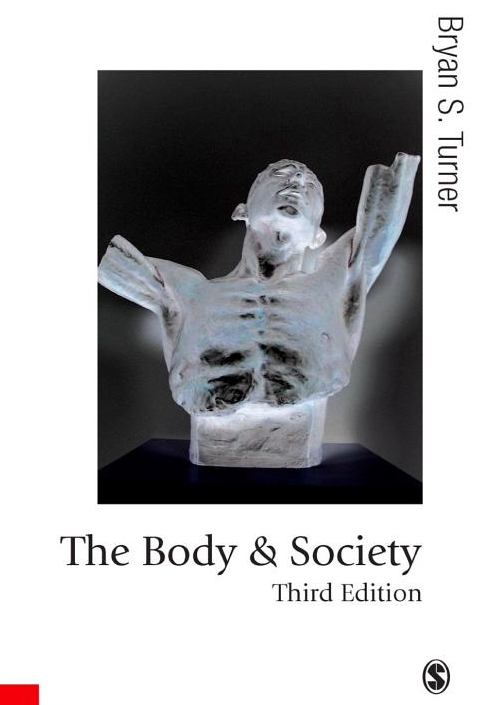 An interview with one of the #FreeTheNipple protestors from the University of California San Diego: https://vimeo.com/127774321 (7:10)

Facebook seems to still be struggling with the double standard applied to men’s and women’s bodies. 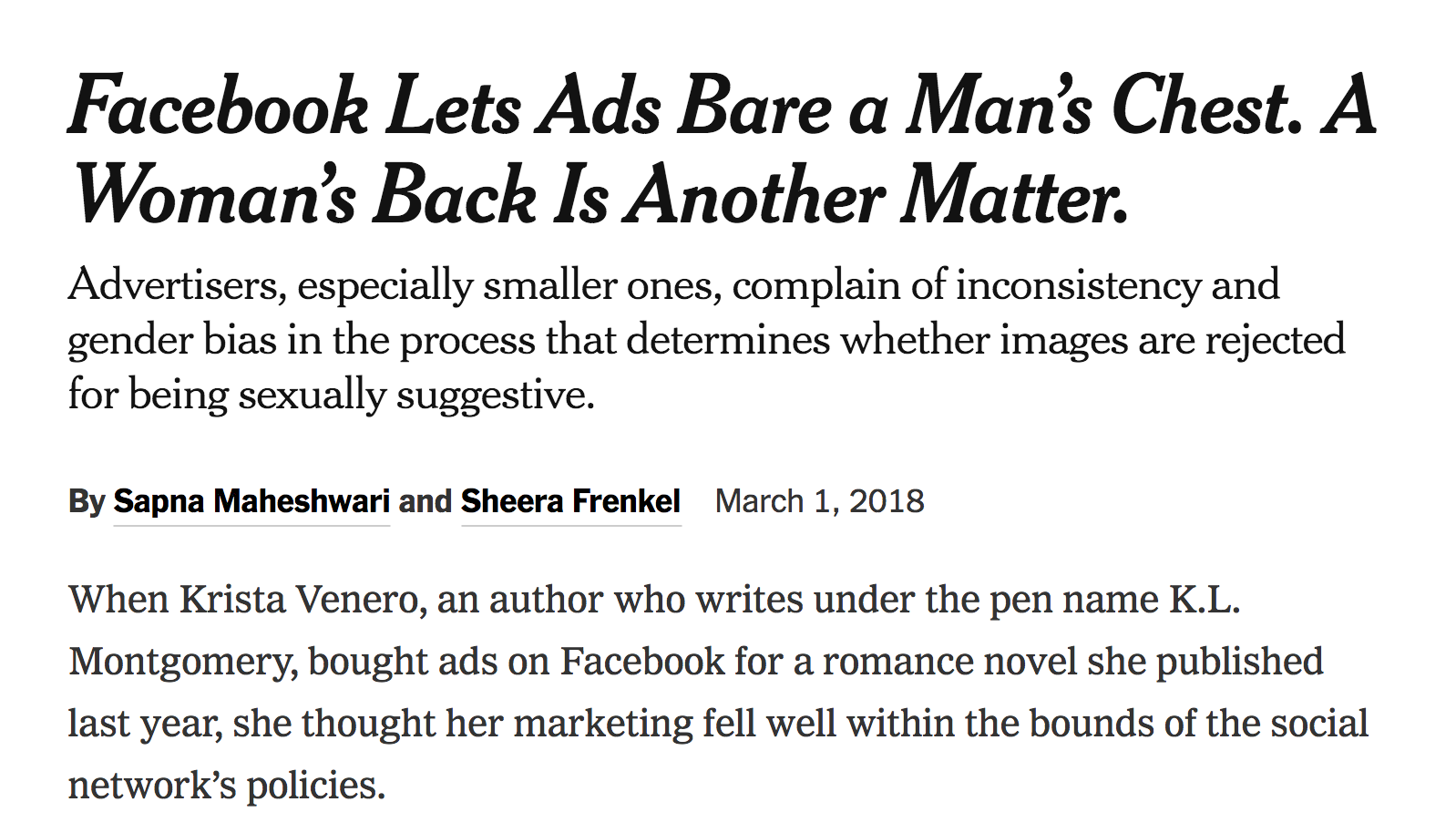 "Sexual objectification is the problem."

People should absolutely not sexually objectify any body part of anyone.

Sex is meant for reproduction, not for toying with sex objects.

There should be some sort of law that prohibits people from finding one another sexually attractive from their looks. Perhaps men should be forced to go around wearing leggings for pants, so erections would be visible, and they would be fined.

With women would be more complicated, but most of the time women are just victims, not the perpetrator, so it's not that urgent of an issue. But with the development of technology, though, in the future there may be clothing that reads physiological indicators of sexual arousal and calls the cops automatically, if some woman is then creepily getting sexually aroused by objectifying some muscular man doing yard work or even some other woman (the social construct of sexual orientation should also be first discouraged, and then banned, as it's the most prevalent form of sexual discrimination, followed directly by the social construct of gender-sex equivalence itself).

[…] last tool that I use to get their attention and teach them about the sociological imagination is the nipple. […]