RACIAL PROFILING: HOW HARD IS IT FOR A WHITE MAN TO GET ARRESTED?

Without doing any quantitative analysis, I would bet that the vast majority of articles (academic and otherwise) that discuss racial profiling investigate the impact of the discriminatory practice on minority males. That is certainly appropriate, as it is hard to study a non-event, such as Whites not being seen as suspicious by police in the same way minorities are. For examples, see a few previous posts of mine:

But what if this issue was flipped, so instead of seeing how Black and Hispanic people are disproportionately harassed, someone tested police reaction to a White male clearly breaking the law? A recent article in The Atlantic by Bobby Constantino, a former assistant district attorney in Boston does just that with incredible results. 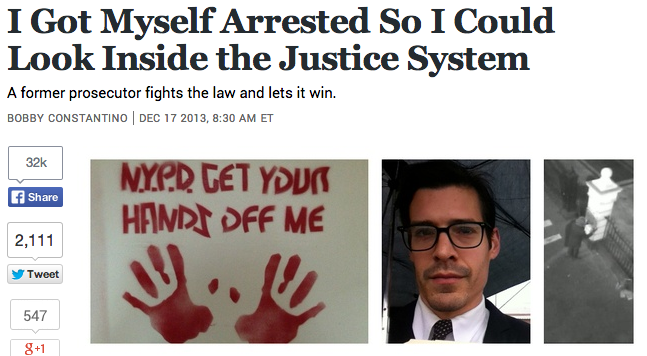 It took an astonishing amount of effort to get the police to arrest him. He walked around New York City visibly carrying two cans of spray paint and a stencil. Possession of spray paint alone is illegal. He estimates that he passed 200 officers without incident. (Read my previous posts mentioned above if this does not sound absurd to you.) Eventually, he had to spray paint the stencil on the walls of city hall just feet from an officer and visually acknowledged by another. Still, he was NOT immediately arrested.

“As I moved the can back and forth, a police officer in an Interceptor go-cart saw me, slammed on his brakes, and pulled up to the curb behind me. I looked over my shoulder, made eye contact with him, and resumed. As I waited for him to jump out, grab me, or Tase me, he sped away and hung a left, leaving me standing there alone.”

He returned to the scene the next day, confessed to the officer guarding city hall and showed him his driver’s license. He was turned away because he didn’t have an appointment. Eventually, he had to turn himself into Manhattan Criminal Court where he was arrested and jailed.

The rest of the brief article elaborates on his experience with the criminal justice system, including his sentence of three years probation, fines, and time served.

Justin Peters, writing on Slate points out the lack of a controlled environment for such an experiment and wonders, “so what?”. Studies already show that police disproportionately “stop and frisk” minority males. Hopefully this incident will inspire more experimental research with testable results. Also, this incident is not the only evidence regarding racial profiling and should not be used as such. But it certainly can be added to the growing pile of evidence and might shock our White students into paying a bit more attention.