RACE OF POLICE DEPARTMENTS: Should they be similar to the community?

Since a police force is designed to protect and serve a community, should the race of the police departments align closely with the racial makeup of the communities? 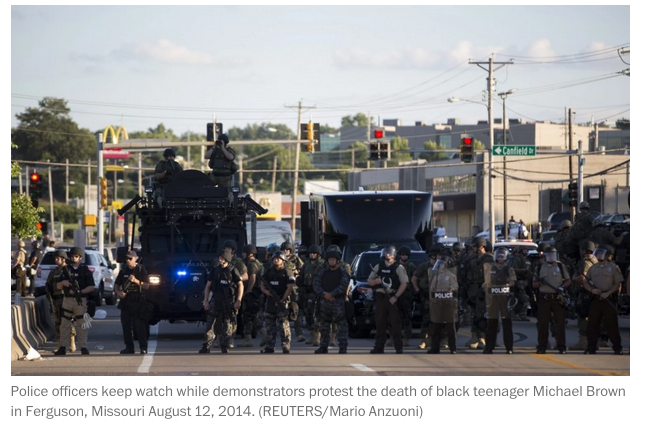 In light of the recent attention given to the killing of unarmed black men by, in most cases, white police officers, the race of police departments deserve more attention. In Ferguson, MO, where Michael Brown was killed by then officer Darren Wilson, what is the race of the department?There were three black officers on a department of 53. The population of Ferguson is majority black. 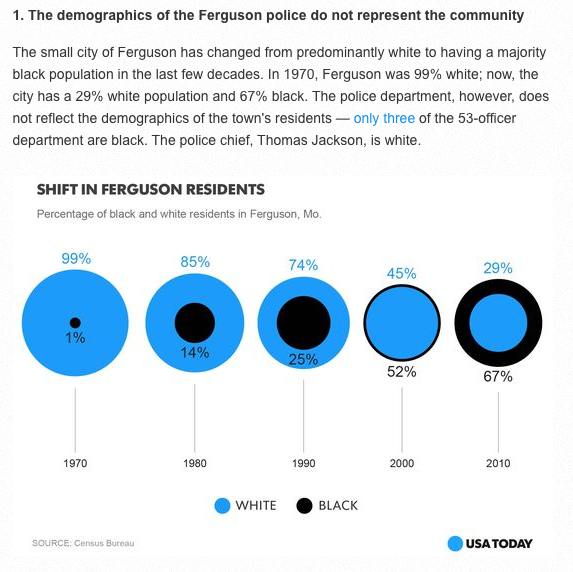 A recent report by the Center for Public Integrity shows that of the top 50 metropolitan areas in the US, 49 of them have a higher percentage of white police officers than the percentage of whites in the population. For example, within the law enforcement officers in Raleigh, North Carolina, 79% are white while only 54% of the population is white. 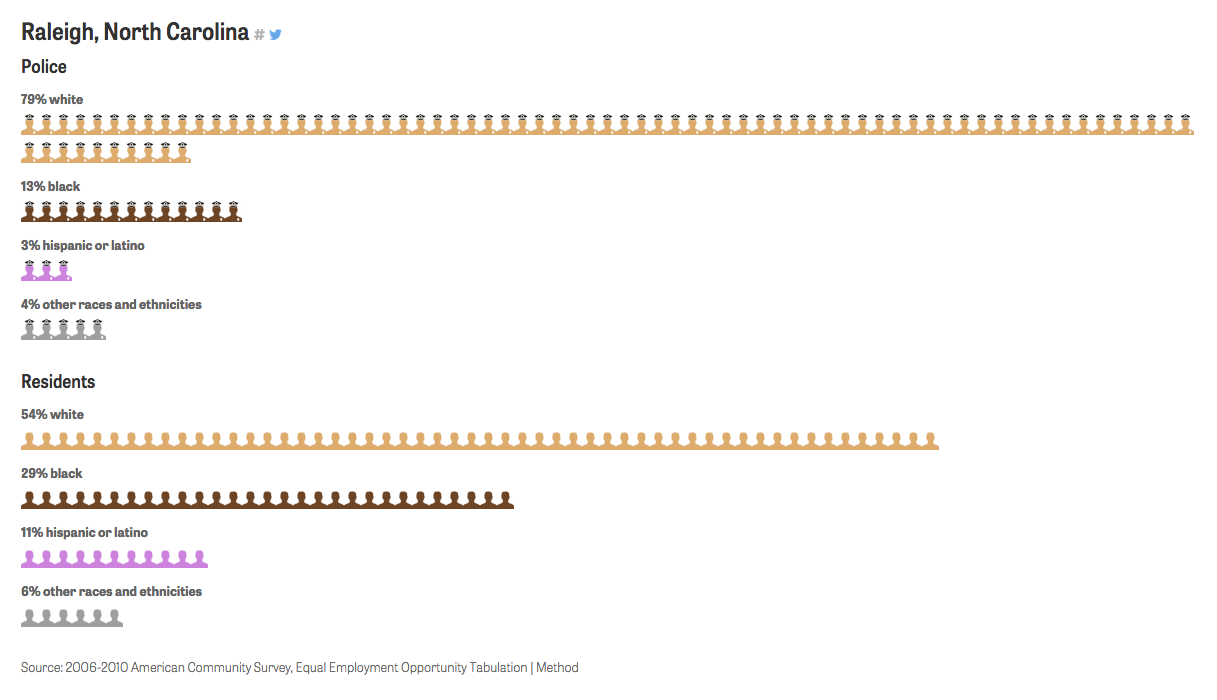 Among the top 50 metro areas, only Atlanta has a smaller percentage of the police force that is white (35%) relative to the population (36%). 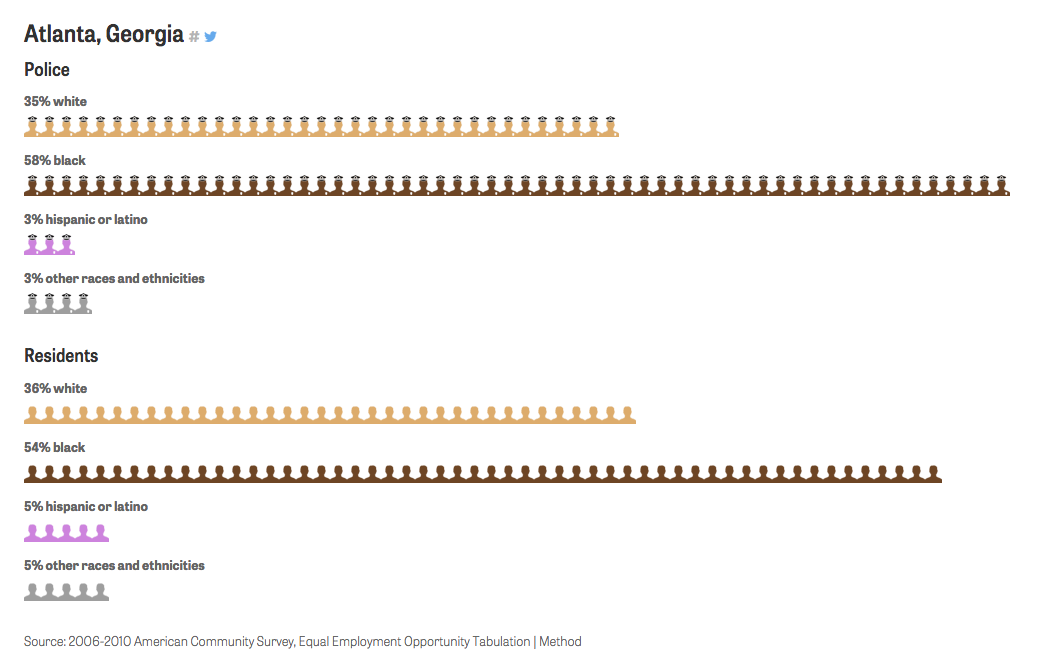 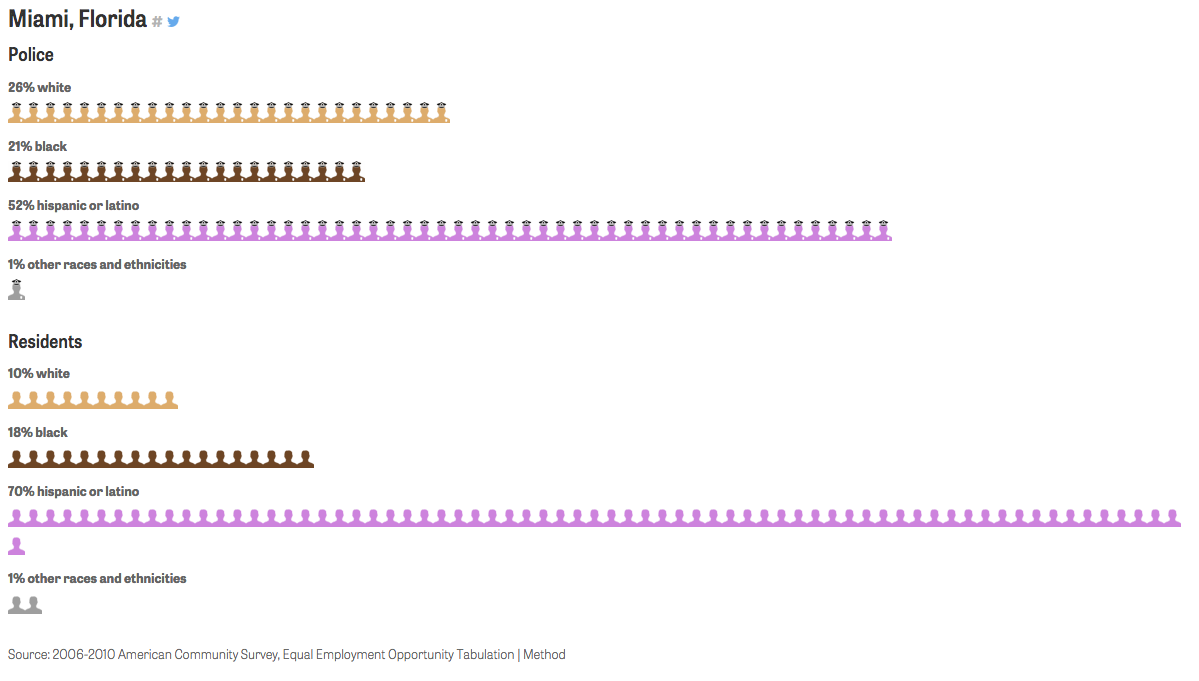 FiveThirtyEight has presented the data ordered by the level of white overrepresentation. 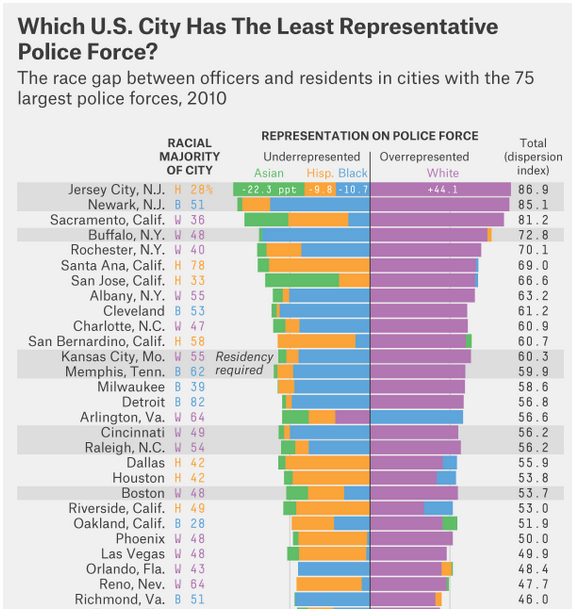 The New York Times has a different graphical representation of the same data, breaking down several major metropolitan areas into their smaller communities. 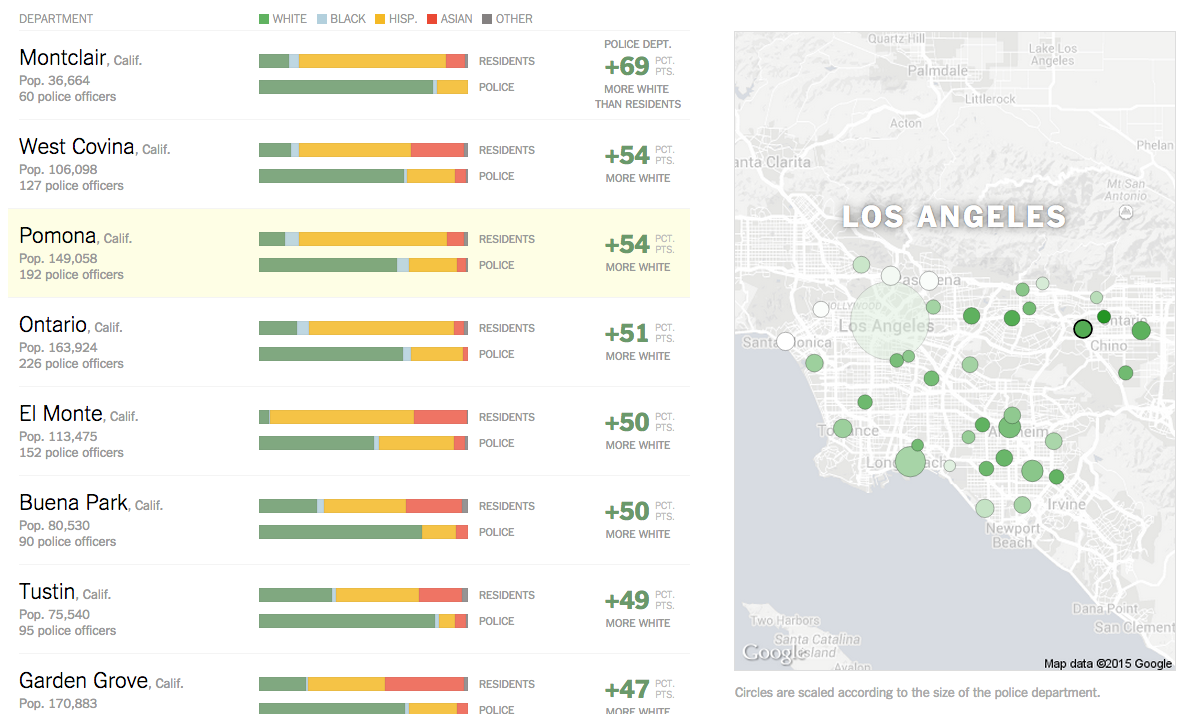 The Washington Post analysis of similar US Census data shows the trends in a great number of cities. There are some, the gray dots in the figure below, that have whites under-represented among the law enforcement officers relative to the population. 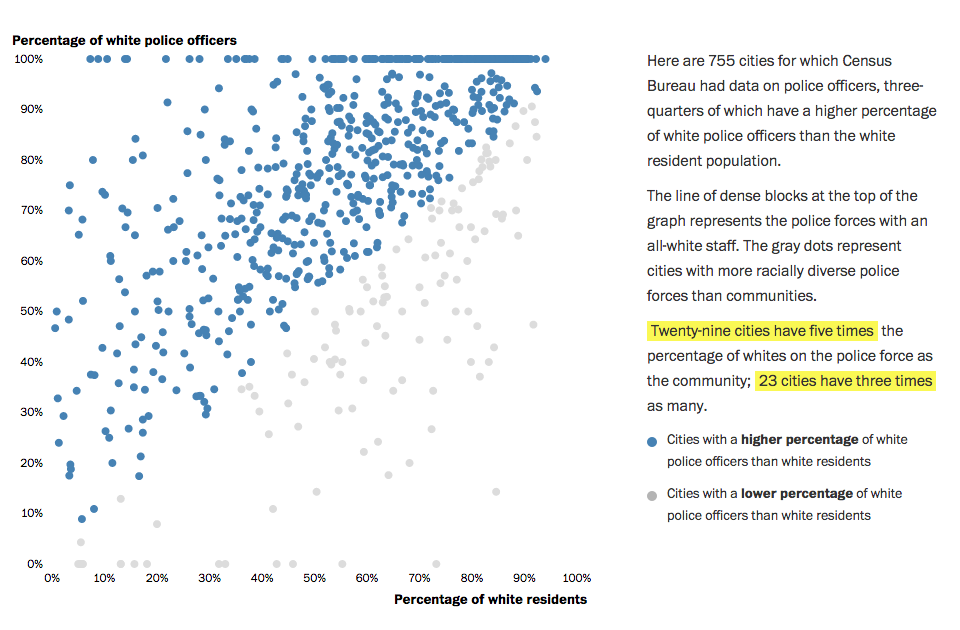 However, as stated in a related WP article by Emily Badger, Dan Keating and Kennedy Elliott, “Across the country, this racial imbalance is not rare. Fifty years after the Civil Rights movement called attention to the under-representation of minorities in police departments, the pattern is still widespread. More than three-quarters of cities on which the Census Bureau has collected data have a police presence that’s disproportionately white relative to the local population.”

Drawing attention to the years of legal challenges enforcing the Civil Rights Act in select cities, the same article argues that it is larger metropolitan areas that have seen the greatest change (toward proportional equality) over the last few decades. “The public outcry and federal pressure that made such inequality so visible in Chicago — prompting dramatic change there — hasn’t historically extended to places like Ferguson, a suburb of 21,000 with 53 commissioned police officers.”

As the occurrence of unarmed black and Hispanic citizens being shot and killed by police continues, trust in the police force by local non-white communities needs tremendous rebuilding. In North Charleston, SC where Walter Scott was shot in the back after fleeing a simple traffic stop, 80% of the police force is white while only 37% of the population is white (2007 data). A good step in the rebuilding that trust is to ensure that the departments look like the communities they represent.

George Washinton University Sociologist Ronald Weitzer is quoted in the above-mentioned NYT story, “Even if police officers of whatever race enforce the law in relatively the same way, there is a huge image problem with a department that is so out of sync with the racial composition of the local population.” And from the FiveThirtyEight article above, David Sklansky of Standford Law reports, “When the police force integrates and begins to look more like the community it’s policing, it removes one big impediment toward trust. It doesn’t guarantee trust, but it removes one thing that makes it hard to develop trust.”

2013 data from Gallup show that nonwhites are much less likely to express a great deal or quite a lot of confidence in the police. 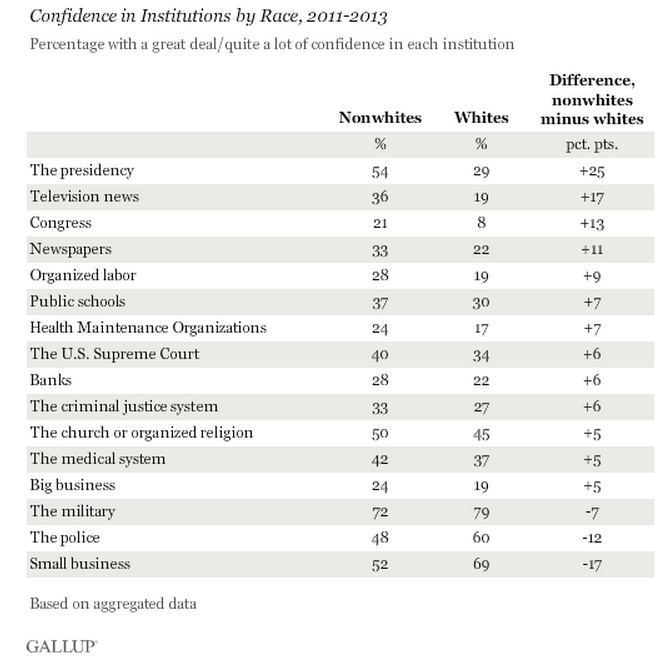 How do the demographics of law enforcement officers in your community compare to the population?

How might the demographics of law enforcement officers affect racial profiling? …and the war on drugs? …all of which contribute to mass incarceration.

New analysis from Brookings explores the representation of minority groups in suburban communities (the original data looked only at the largest cities). The results indicate that  in many of the suburbs the minority under-representation in the police forces relative to the population of the communities they serve is much worse than the central city. For example, while Miami may have virtual equal representation of minorities on the police force as are in the general population, in nearby Pembroke Pine minorities are vastly UNDER-represented as police in relation to the distribution in the population. Similarly in Coral Spring, outside of Miami. In many communities, the police force still do not look like the communities they serve. The police are vastly more White. 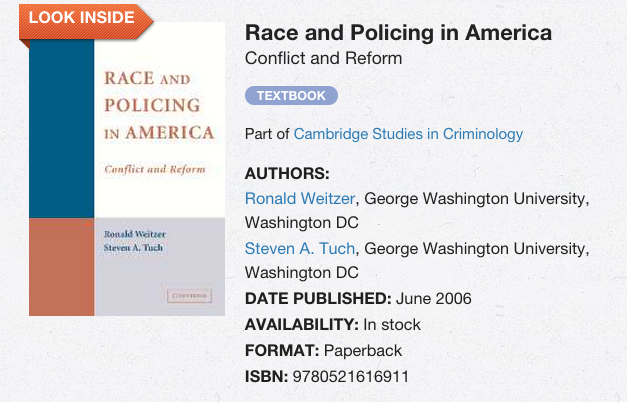 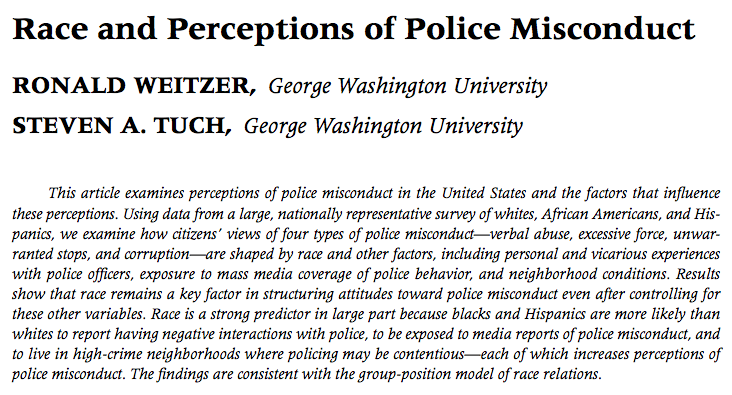 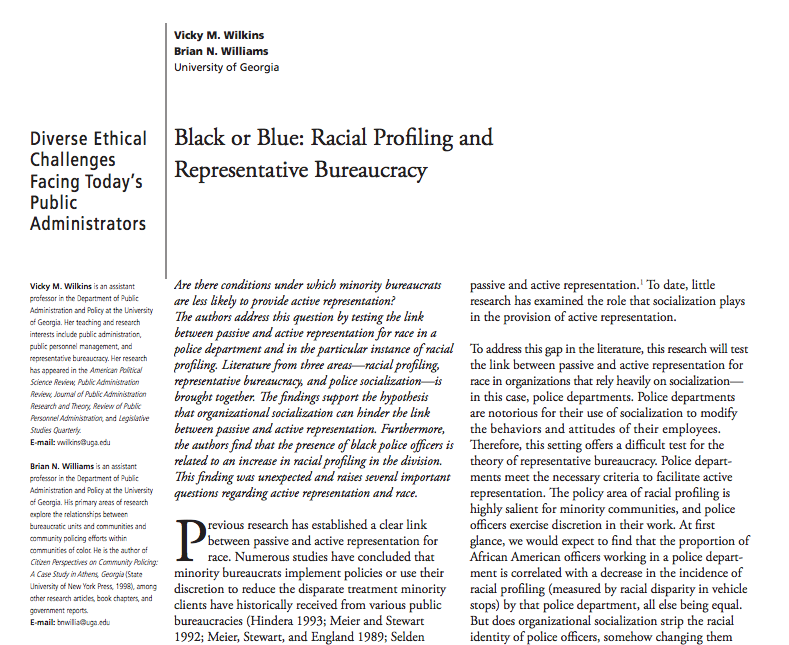 Click on the following image to link to the full article: 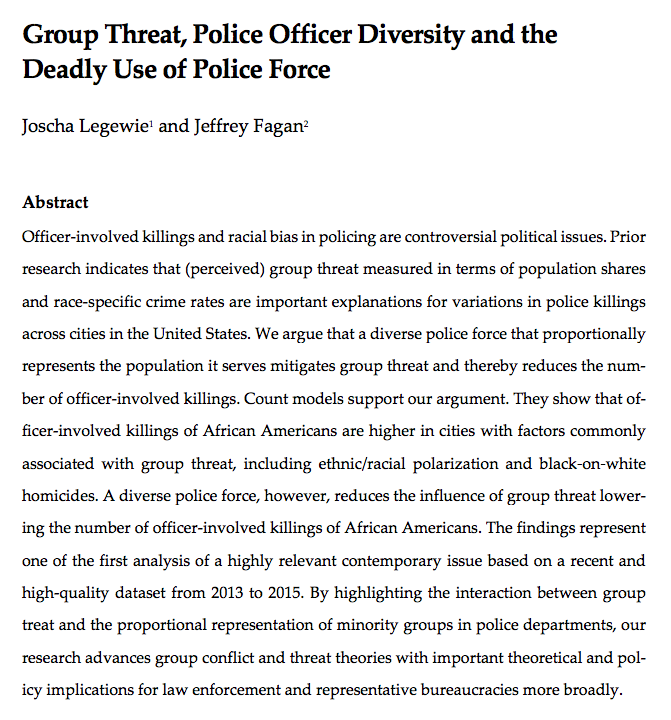 […] RACE OF POLICE DEPARTMENTS: Should they be similar to the community? Since a police force is designed to protect and serve a community, should the race of the police departments align closely with the racial makeup of the communities? […]