A couple of months ago I wrote about the police killing of Walter Scott, an unarmed black male in North Charleston. While the killing was horrific, I had a sense that things had changed. The officer, once the truth was revealed by the cell phone video of a bystander, was charged with murder. The officer being charged was a change in the pattern of police killings of unarmed citizens that received renewed attention after unarmed Michael Brown was shot by officer Darren Wilson in August of 2014.

However, since Walter Scott was killed, Freddie Gray was manhandled by police in Baltimore and taken for a “ride” in the police vehicle that was so rough he suffered a fatal spinal injury. The officers in that case have also been indicted. That’s a good sign.

But, it keeps happening. “Police kill unarmed black male” is a headline that we will likely see yet again. What will it take to stop it?

It nearly happened again last weekend in McKinney, TX when an officer broke up a teen birthday pool party as if he was facing an active shooter, pinning to the ground a 14-year-old black female and drawing his weapon on her friends who expressed outrage at the officers clear (and now admitted) over reaction. She was wearing a bikini, was clearly not armed and was walking away when he violently yanked her back into the scene and violently pinned her down, face first into the ground. Again, it was all caught on cell phone video. He has since resigned.

After all the media attention, indictments of officers, and US Justice Department intervention, how have these incidents continued?

While it seems impossible that law enforcement departments are not addressing the issue, it also seems like many didn’t get the memo, so to speak. So, I drafted one and here I make it available to all to print out and post on the bulletin board of important memos or email to officers. 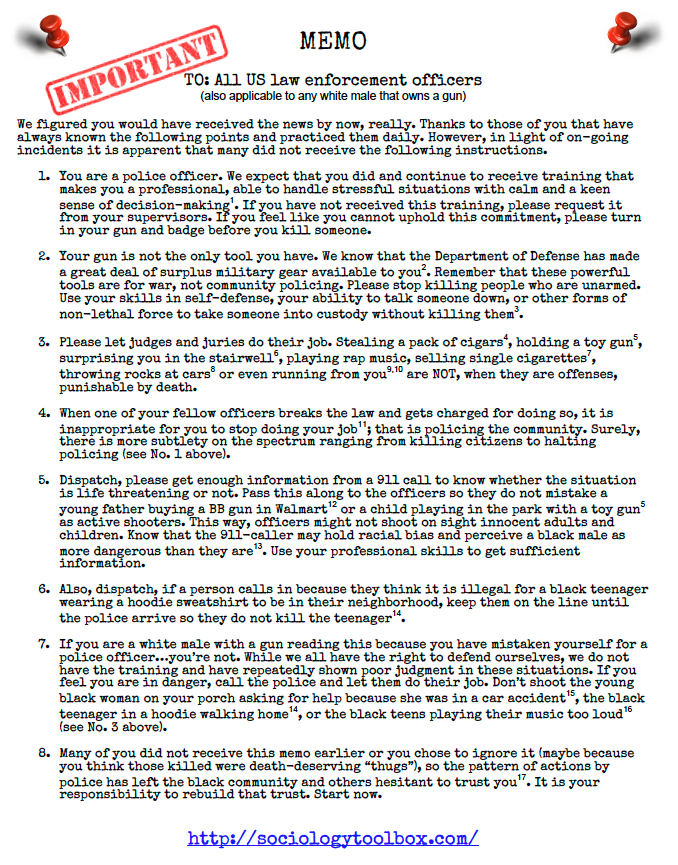 Subsequently, in the news… (click on the images to go to the full story and/or video)

Police kill an unarmed black man in Louisville, KY. The person was in fact swinging a flag pole at the officer, but the officer did not use his Taser, his club, or non-lethal gun shots. 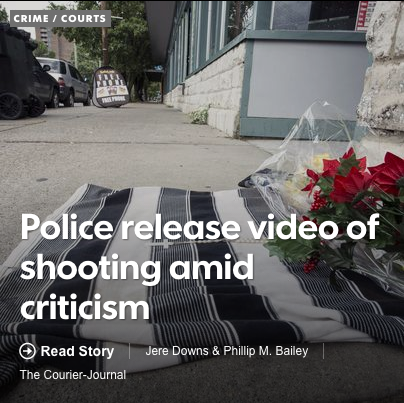 This homeless black male in Florida was wielding a pipe. 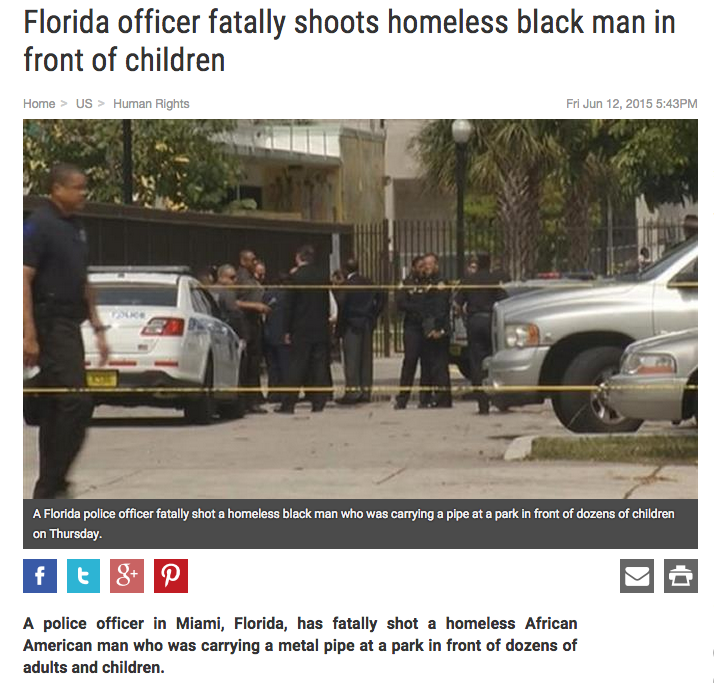 “Officer Loehmann and Officer Garmback were sent to the scene after a 911 caller said he had seen someone outside the recreation center pulling a gun in and out of his pants and scaring people. But the caller, who was not identified, also told the emergency operator, Constance Hollinger, that he believed Tamir was probably a juvenile and his gun probably fake — information that was never relayed to the two officers” see NYT story below 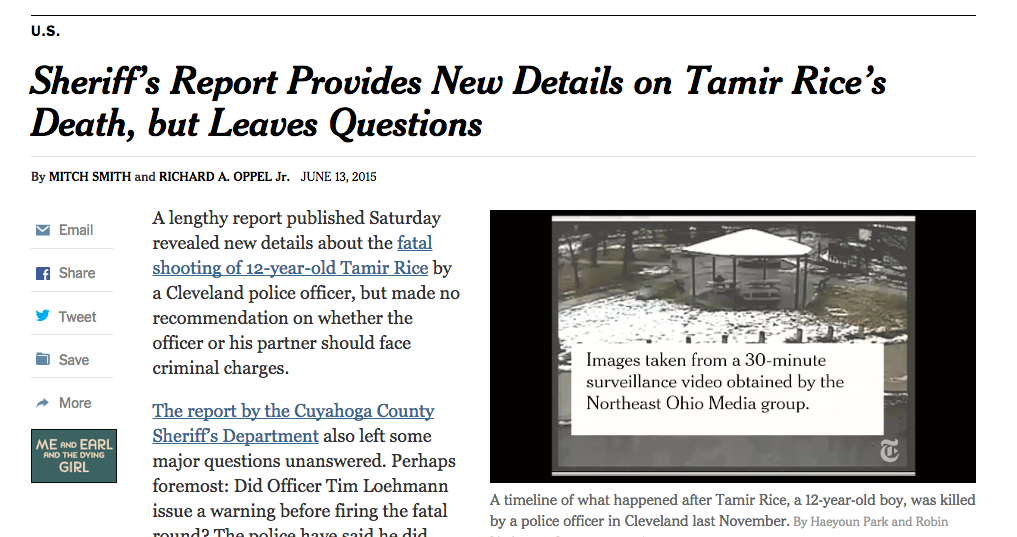 A radio story on the lack of training for many police officers across the nation: 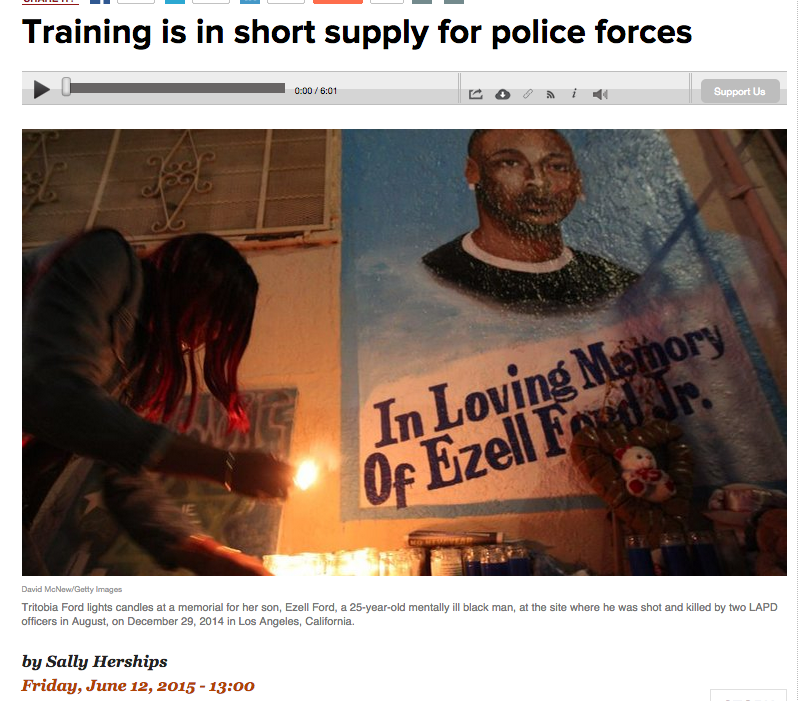 From the New York Times in-depth report on the death of Eric Garner:

“An autopsy was performed the next day. “On external examination of the neck, there are no visible injuries,” according to the final report. On the inside, however, were telltale signs of choking: strap muscle hemorrhages in his neck and petechial hemorrhages in his eyes. No drugs or alcohol were in his system.

The results of the examination contrasted sharply with the Police Department’s initial account, titled “Death of Perpetrator in Police Custody, Within the Confines of the 120 Precinct.” It contained no mention of any contact with Mr. Garner’s neck.” see full article below

One year later, the New York Times looks back at the chokehold death of Eric Garner, and unarmed black male killed by police. Click on the image below to see the photo essay and short video of the trials of his family in the past year. 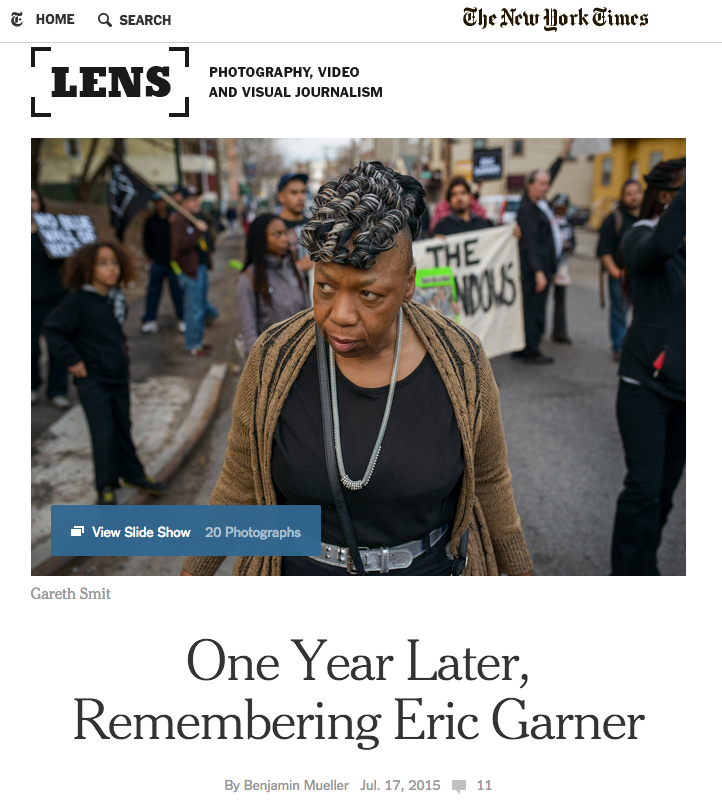