NACIREMA: UPDATING A CLASSIC TO SEE YOUR OWN CULTURE AS AN OUTSIDER

Nacirema, that “exotic”, far-off place where people do “strange” things is one of the best ways to help students look at American culture as an observer rather than as the standard by which all other cultures should be compared. The paper, written by University of Chicago trained anthropologist Horace Miner was originally published in 1956. It examines the body rituals and practices of US culture the way anthropologists used to “other” cultures in seemingly distant lands that seemed unusual, if not “weird”. 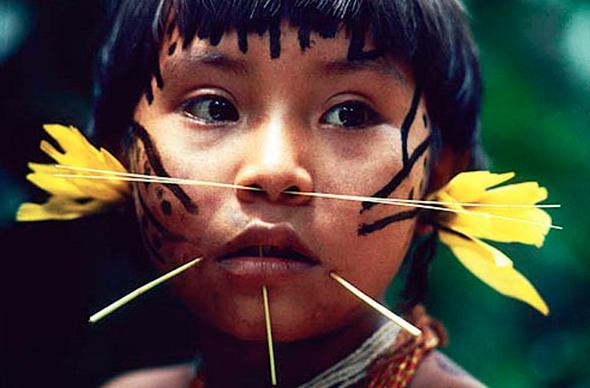 For example, Miner writes “The daily body ritual performed by everyone includes a mouth-rite. Despite the fact that these people are so punctilious about care of the mouth, this rite involves a practice which strikes the uninitiated stranger as revolting. It was reported to me that the ritual consists of inserting a small bundle of hog hairs into the mouth, along with certain magical powders, and then moving the bundle in a highly formalized series of gestures.”

Now without the photo below (but maybe skewed by the photo above) and in the context of the rest of the paper, many students do not recognize this as our daily habit of brushing our teeth. When described the way the Miner does, it sounds strange and maybe even a bit gross.

What one culture does and believes to be normal, others may see as unusual. Remembering that practices are driven by the culture someone is situated in, including our very own practices, is key to avoiding ethnocentrism – the mistaken belief that your culture is the standard by which others should be compared. The photo below shows different tools for cleaning one’s teeth – yes, even the sticks. 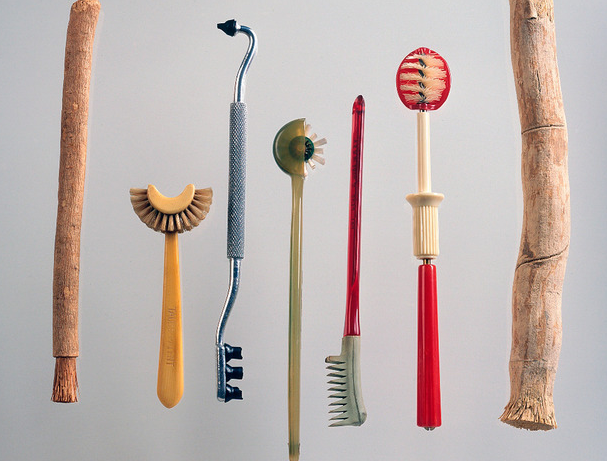 In some of my classes, as part of a paper exploring the concepts and influence of culture, I ask students to explore a ritual within their own culture but from an outsider’s view – as if they were witnessing the practice for the first time and trying to understand it. The following is an excerpt from one of the excellent papers I received from a student, Emily Ong (used with her permission). She does a great job of describing the US rituals of the Christian holiday, Christmas.

“Holidays are integral parts of different cultures and by looking at them through the eyes of an outsider, we can see how culture influences perspective. For example, we can look at Christmas from the perspective of someone who is not a part of American culture. I can imagine that person’s evaluation would be something like the following: During this holiday called Christmas, families take great care to ensure that they decorate their houses and various shrubs with wires. These wires are attached to a side of the house and only come on at night. When they do, the house and shrubs look very bright, and not a single house on the street is without these wires. These Americans, thus, are all quite concerned with the overall presentation of their houses: they make sure other people see and admire them. One could almost call them obsessed, as some houses have giant men, white bears, and black and white birds puffed full of air in front of their houses. Such houses, I have observed, draw people’s eyes as they pass by. 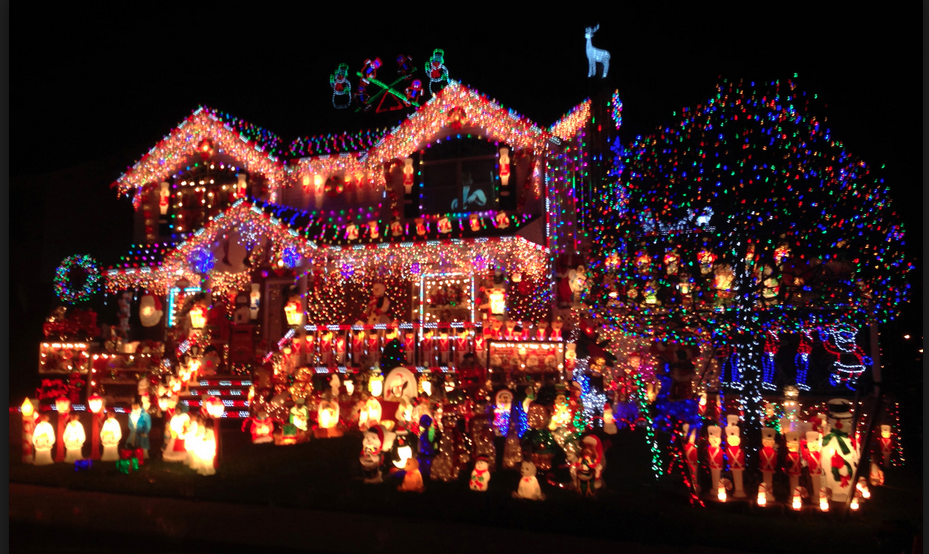 Families also make sure they get a hold of a rather sizable green tree, but they go outside of their property to find such a tree. The ones immediately outside their house are apparently not fit. They desire a different one, which holds more importance. In addition, for some reason, the tree must be a rather large tree with lots of foliage. The small and thin trees with exposed branches are often not given a second look and are left with the person selling the trees.

Once the family has picked out their rather plump tree, they have to go through the challenging and exhausting task of bringing it back to their home. They have to lift it up and tie it to the top of their vehicle, and then drive very slowly so the tree will not fall off the car. Once they get home, they have to lift it once again off the car and into their house. Sometimes it doesn’t fit very easily through the entrance to their house, and many members of the family have to help get the tree through the doorway. Once the tree is inside, for some reason they put it in the center of the room, and proceed to decorate it with various gaudy balls and gems on strings. They also put some wires around it, which when attached to the wall, make the tree look very bright. The most peculiar act, however, has yet to be done. A star, or in some cases an angel or other figurine is put on top of the tree, and it seems to be an honor for the person who is allowed to put it there. They must be of some great importance or have some great wisdom, which allows them the honor of completing this task. Once they do, everyone admires the tree even more. The tree also seems to serve as some kind of offering place because people gradually place decorated boxes around the tree in the days leading up to Christmas. People also stop and like to gather around the tree and gaze at it. 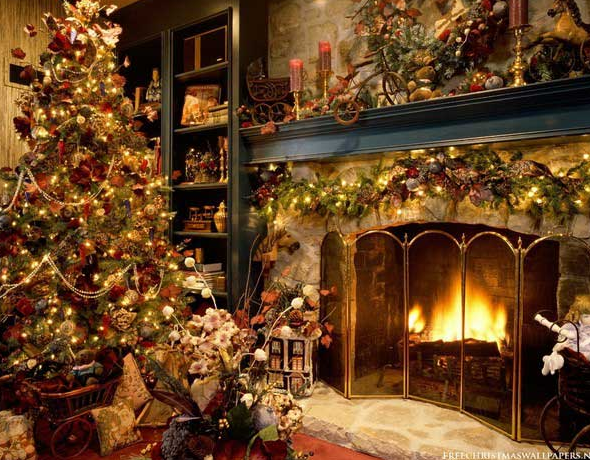 An odd ritual occurs the night right before Christmas: children hang socks above a structure that houses a fire although they look far too large to be anyone’s sock. Then they leave hard biscuits shaped like men and a cup of milk out next to the tree. I do not understand the importance of this, as usually the father of the family just eats the biscuits and drinks the milk anyway, and it is always late at night when he does this too. Does the eating of the man-shaped biscuits represent some sacrifice? This I do not know. Anyhow, in the morning, more boxes appear, and children act very wild, almost savage-like. They rip up all of the paper covering the boxes, and leave a mess on the floor. It seems that the boxes were for them all along, not another being or deity. That is curious. Why did they not just give them to the people in the first place? What is even more confusing is that these items in the boxes are often not kept. They are taken to a store where, when presented with a slip of paper, can be exchanged for currency. Why is so much trouble taken to offer the items to people, wrapped and put under this gaudy tree only to be given away? The material items that are kept, though, seem to consume all the time of the children. One child was given a circle with a hole in it, which was in a rectangular case, and he put this circle into a box and proceeded to stare at the screen and hold a device attached to the box by a wire. He clearly thought that was more important than spending time with his family or friends. In fact, most of these Americans I have observed highly treasure their material items from under the tree as they pay more attention to them than to fellow Americans.

What’s more is that once Christmas is over, all of the gaudy gems and balls on the tree have to be removed and the tree must be moved out of the house. It is so much work to get a hold of the tree and to decorate it, and it seems very important, yet at the end of the day many of the trees are thrown away. So much hard work gone to waste. The only normal part of the holiday seems to be the family gathering for dinner on Christmas day. Everything else, I do not understand.”

Through this exercise, students hopefully see both their own and other cultures in a new light – one that understands how we are all so embedded in a culture that it is difficult not to see dramatically different rituals as “exotic” or “weird”. By looking at our own cultures as outsiders we can see that we are under the same influence of the power of culture as others are.

Amazing. Thank you. Wisdom of life.

teach well, it matters. every culture is dynamic and no particular group should pride themselves better than the other, afterall, what is culture if not DOINGS AND ACTS of our foregone generations...…...

This writing helped me understand others' perceptive of the things that I find normal.

Amazing article that will definitely help people better understand how others may view their culture.

[…] https://thesocietypages.org/toolbox/nacirema/ (Links to an external site.) […]