PATTERNS OF POLICE SHOOTINGS: One year after Ferguson

It has been a year since white, male, then-police-officer Darren Wilson fatally shot Michael Brown, an unarmed eighteen-year-old black male in Ferguson, Missouri.

This was neither the first nor the last deadly encounter between disproportionally white law enforcement and unarmed black citizens. For extensive coverage of the events in Ferguson as they unfolded a year ago see my previous blog post full of valuable resources that explain the events from a sociological perspective. 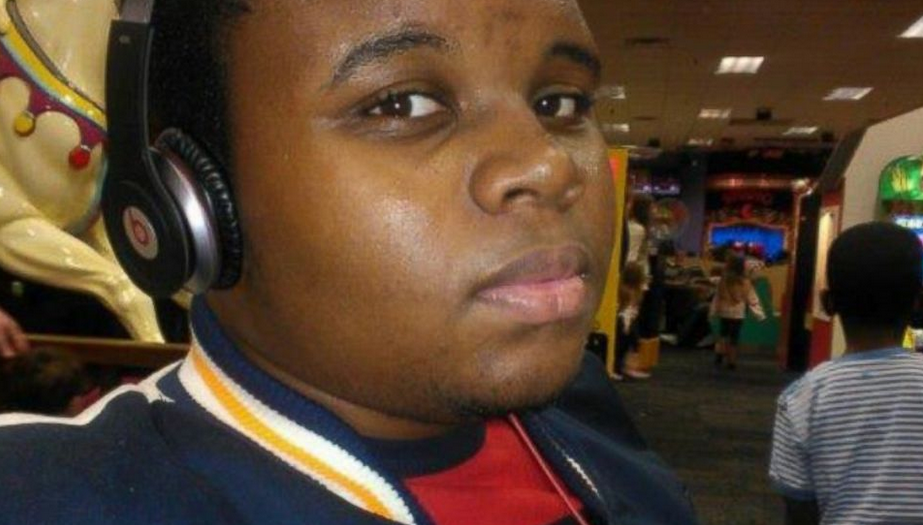 Unfortunately, in the year subsequent to Michael Brown’s death in Ferguson there have been numerous cases of police using excessive and too often lethal force on unarmed or lightly armed black and Hispanic/Latino citizens. After the murder of Walter Scott in North Charleston, it appeared as if the tide had turned and police would be held accountable. The shooting officer was charged with murder while Darren Wilson in Ferguson was not indicted.

However, several trends have emerged in the subsequent cases of police using excessive, often lethal, force.

In many of the police killings in the last year, the following patterns emerge:

1. POLICE RELY ON DEADLY FORCE WHEN IT IS VASTLY UNWARRANTED

In none of the cases that received attention from the public, the media, and protestors were the suspects armed with a gun. Most often they were completely unarmed.

Michael Brown had no weapon. While there are disputed accounts about him charging at officer Darren Wilson, the police have numerous less-lethal tools (Tasers, batons, pepper spray, defensive training, retreat, backup, the safety of their vehicle, non-lethal gun shots, etc.) to defend themselves. When unarmed Samuel Debose failed to produce his driver’s license in Cinncinati, it ended in his death because the officer went immediately to his gun to solve the problem. In a case that received little to no national attention, Sudanese war refugee (aka Lost Boy), Deng Manyoun was shot and killed by an officer in Louisville, Kentucky after brandishing a small flag poll in an encounter with police.

Back in February of 2015, Antonio Zambrano-Montes a 35-year Mexican immigrant was unarmed and shot five times (police fired their guns 17 times) in the back by two officers in Pasco, Washington. Unarmed Eric Harris was shot by a 73-year white, volunteer deputy in Tulsa, OK after already being apprehended and on the ground. The volunteer claims he was reaching for his Taser. Thomas Allen Jr. had already been searched by police and determined to be unarmed during a traffic stop. When he fled the scene in the car, officers shot and killed him. In just one example of the many shooting by police prior to Michael Brown, unarmed Latino male, Ricardo Diaz-Zeferino, was trying to explain that he and his friends were looking for a bike that had been stolen when he was shot and killed by two officers.

It was not the officer’s gun but an illegal chokehold that killed Eric Garner. Freddie Gray had a small knife in his pocket but was not brandishing it at officers (or anyone). While he was not killed by a gun, his neck was broken by the force with which he was detained and transported to a police station.

According to “The Counted” a project of the Guardian newspaper to track all those killed by the police in the US beginning in 2015, 150 completely unarmed citizens of all races and ethnicities have been killed by police (as of August 2015). 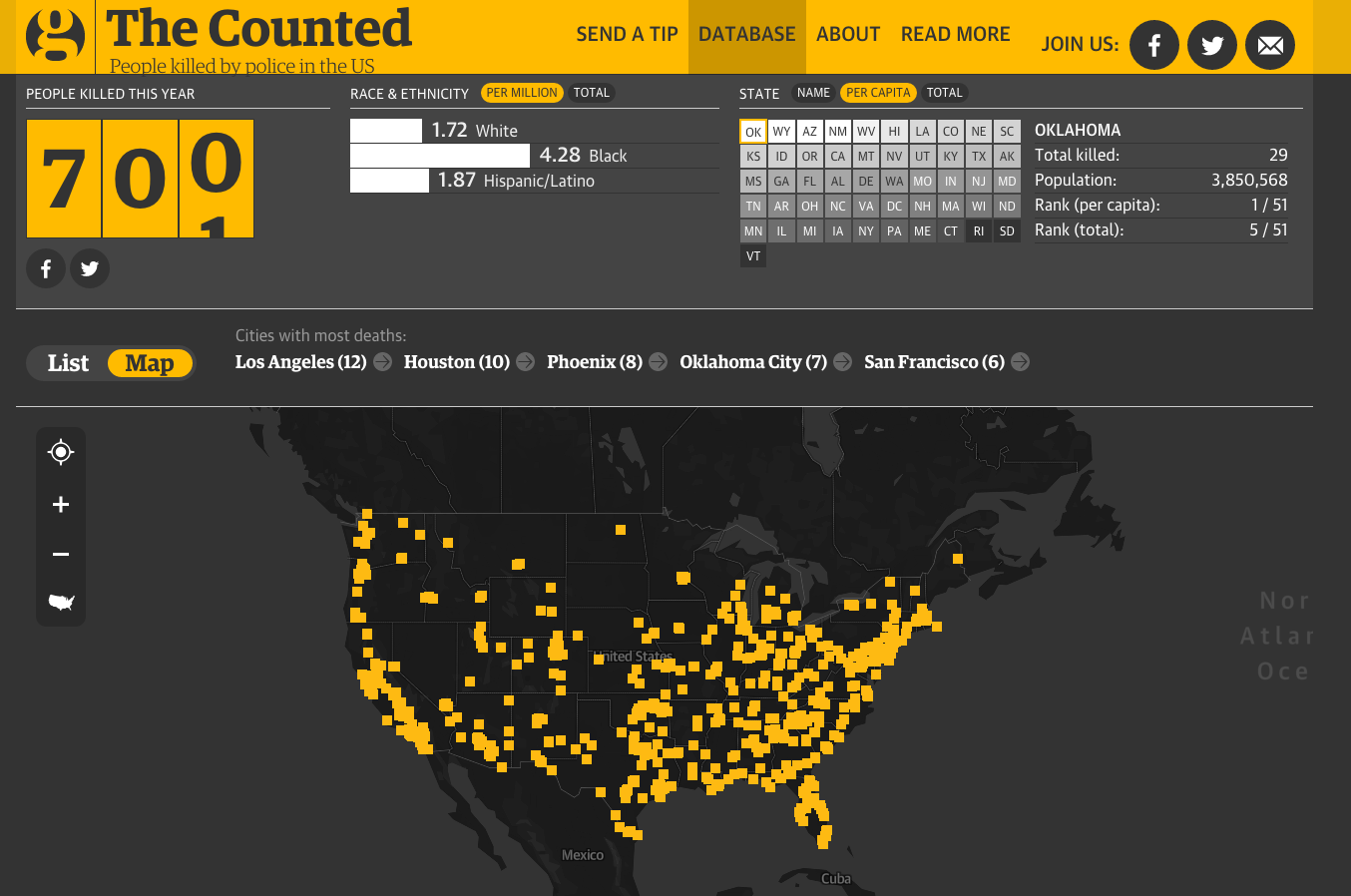 According to The Guardian’s database, of the 150 unarmed citizens who have been killed by police so far this year, a disproportionate number, relative to the population in the US have been black. 144 of the 150 or 96% have been male. 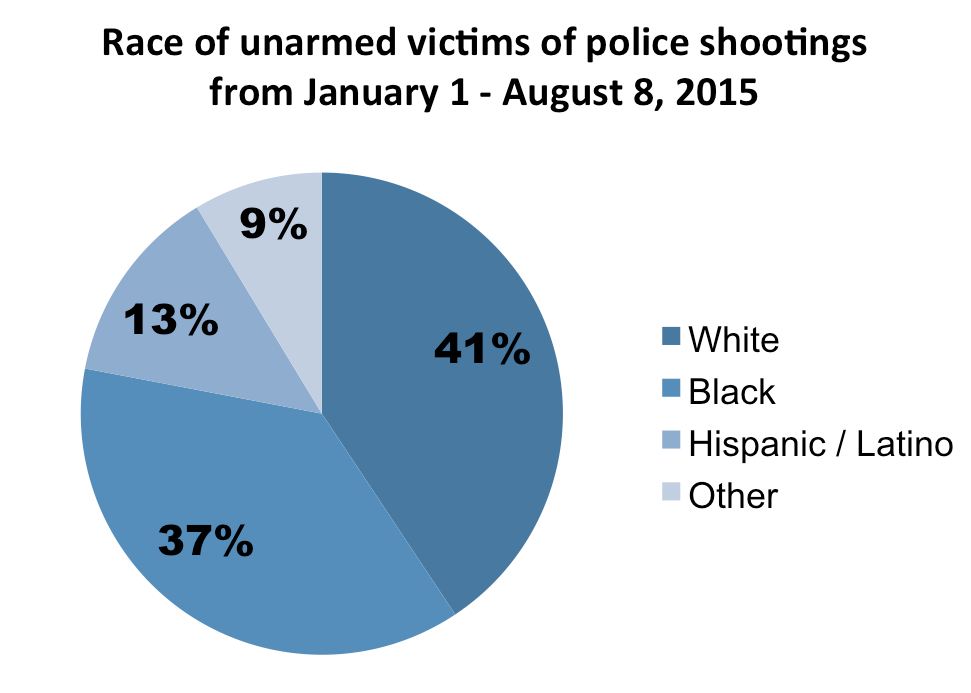 There is little to no public outrage over police using their guns when the suspect is threatening lethal force. For example, several months after Darren Wilson killed Michael Brown there was another police shooting within a few miles of Ferguson. In nearby Berkely, Missouri, officers shot a black teen at a gas station. The teenager was armed with a gun and pointed it at police as they approached. The Black Lives Matter protests were active and ongoing, so it was a not a lack of attention that failed to raise concern over this particular case.

Other countries manage to kill far fewer suspects and citizens in the act of enforcing the law. For example, in Iceland, the police have only ever killed a single person…EVER. Now, Iceland has a much smaller population, but the difference is dramatic. Also, in Germany, police killed 15 people over a recent two-year period while police in the US killed 19 in just the first five months of 2015! 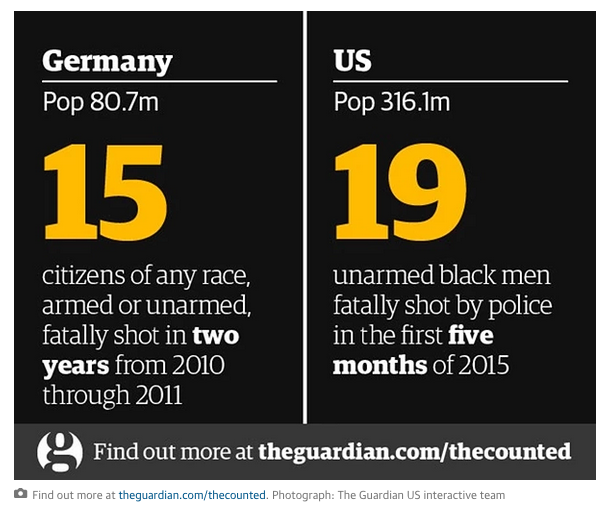 From a policy standpoint, law enforcement rules and training need to change to more thoroughly ensure that all forms of non-lethal force are the “go to” tactics of ALL officers. Of course, we do not read about all of the police officers that don’t shoot unarmed people, but the consequences and continuing pattern of officers that default to the fatal use of the gun are tragic and signal a failure in the social system.

In nearly all the cases that have received public outcry over the last year (and many that did not receive as much attention) those killed by police were committing crimes that didn’t place others’ lives in danger. Walter Scott was pulled over for a tail light being out. He fled the scene but put no one else at risk. He was shot three times in the back from a short distance after knocking the Taser out of the officer’s hand. Eric Garner was selling individual cigarettes; illegal due to the varied taxation of cigarettes in surrounding states. According to the New York Times, one of the officers approached Eric Garner and said, “We can do this the easy way or the hard way.” A simple traffic stop, like that of Samuel Debose for missing the front license plate from his car, ended in his death because the officer escalated a petty crime to a deadly confrontation. Nineteen year-old Christian Taylor was vandalizing cars. 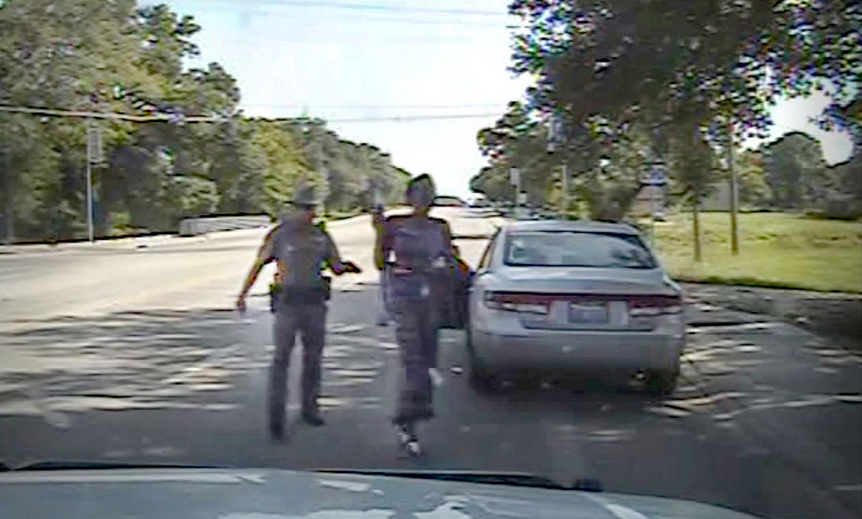 Police escalate the confrontations for minor violations rather than defuse any interaction or leave citizens who are not breaking the law to rightfully go about their business. Sandra Bland was stopped for not using a turn signal on a street with no other traffic. She was angry for being pulled over, but the officer amplified the tension by demanding she extinguish her cigarette and stop recording the encounter on her phone (neither is something she is legally required to do). He removed her from the car, handcuffed her and forced her to the ground. She was arrested and her suicide in jail is being disputed by her family.

3. POLICE ARE PRIMED TO SEE BLACKS AS DANGEROUS

Police are particularly ready to use deadly force when the person is not white. This racial bias was evident in New York City’s racial biased “stop and frisk” program where officers were allowed to stop anyone that they deemed “suspicious”. In the first quarter of 2015, 83% of those “stopped and frisked” by the NYPD were black or Latino.

In some of the cases in the last year, police killed black males armed with toy guns. In November of 2014, Tamir Rice, a 12-year-old black boy was shot by police a few seconds after they pulled up their car within few feet of him in a public park in Cleveland. He was in the park playing with a toy gun. 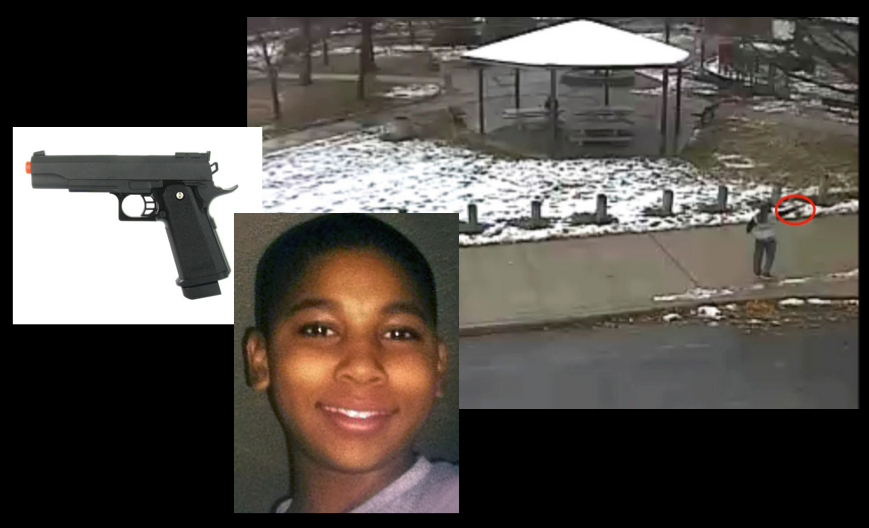 John Crawford was buying a toy gun for his son in Walmart when police shot and killed him on site in the store! Jermaine McBean was walking with an unloaded air rifle in his apartment complex with his headphones on when police shot and killed him. Rekia Boyd, a 22-year-old black female was killed when an off-duty police officer here in Chicago fired into a group of people after thinking a cell phone was a gun. Akai Gurley was shot on site in the stairwell of his apartment building. The officer claimed it was an accident. Jonathan Ferrell was in a car accident in Charlotte, NC when he went to a nearby home to ask for help. The homeowner was scared and called the police. When the police arrived Jonathan approached them for help and they shot him dead.

Police have an unconscious, implicit negative bias toward black citizens. This is often referred to as “shooter bias”.

4. PREVIOUS CRIMINAL RECORDS OF THE VICTIMS ARE USED TO JUSTIFY THE SHOOTINGS

When news of a shooting breaks, many commentators (from the media to the internet) use any previous criminal record of the victims to justify the police shooting them. Having a criminal record does not sentence someone to death. In each encounter with the police, citizens should be treated equally. Police are simply there to make an arrest, not judge and sentence the person – to death. It is up to a judge to determine any augmented sentencing due to a previous criminal record. Lastly, an arrest record does not equal a conviction record.

From cell phone videos of bystanders to body cams on the officers to dash cams from officers vehicles, many cases have come to the public’s attention only because of the footage. Often this footage counters the officer’s report of what occurred. In previous decades, when this technology was either not available or not used, we are left only speculating how many times the “official” story by police was not what occurred and instead covers up the killing of unarmed citizens.

Important videos include (click on each to see video):

Eric Garner being put in a chokehold.

Walter Scott being shot in the back by police.

Many of these trends reflect those noted by human rights activist and union organizer, Steve Martinot in March 2013 article, “The Epidemic of Police Killings” in the journal Socialism and Democracy. This article also documents many of the pre-Ferguson police killings (in case we mistake that for the first) like Oscar Grant, Sean Bell, Amadou Diallo, Alan Blueford, Ramarley Graham, Karen Day Jackson, Tyisha Miller and Kenneth Chamberlain Sr., among others.

Examining these patterns shows that these are not isolated incidents, rather they emerge under specific social conditions. As Martinot argues in his article:

“To understand this epidemic, we must examine the individual cases. In doing so, the possibility exists that in standing separately, they may become denuded of context or social process. But if there is an etiology to be diagnosed, we need to discern the common structure of these killings.” 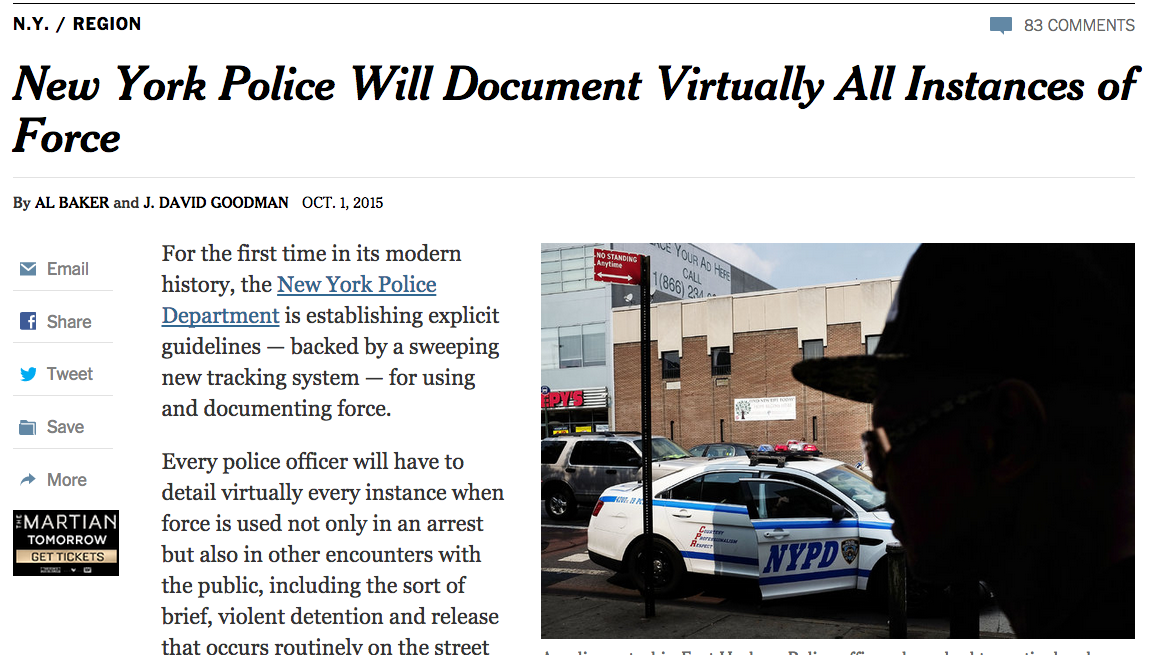 Did I miss the stats on the percentage of violent crime committed by each of the listed ethnic groups compared to their percentage of the population?

Very sloppy reporting. While the message may be true, this article does not provide an accurate factual basis for its claims. As pointed out in the previous comment by JJ, nowhere in the article is any information given on the proportion of various groups in the population at large. This glaring omission makes the pie chart meaningless in terms of drawing conclusions, and fails to provide any evidence for the claim that "of the 150 unarmed citizens who have been killed by police so far this year, a disproportionate number, relative to the population in the US have been black."

More inexcusably sloppy reporting can be found around the comparisons made between the US and Germany. The article states that "in Germany, police killed 15 people over a recent two-year period while police in the US killed 19 in just the first five months of 2015!" This misstates the data from the graphic immediately below the text. The 19 killed figure only counts unarmed black men. The number of people fatally shot by police in the US over the same time period is actually 412.