The color of one’s nipples varies according to the color of one’s skin. Lighter-skinned people tend to have lighter nipples, while darker-skinned people tend to have darker nipples. To add to the many racist products and procedures designed to make the bodies of darker-skinned people more like the bodies of lighter-skinned people — eyelid surgery, eyelid gluing, Asian rhinoplasty, hair straightening, and skin lightening — Theresa W. sent in a product designed to make the nipples more “pink.”  These products, featured at The Faster Times, seem to be mostly aimed at the Asian market, many of whom are already quite light-skinned.  Below is a selection of the many products one can find. 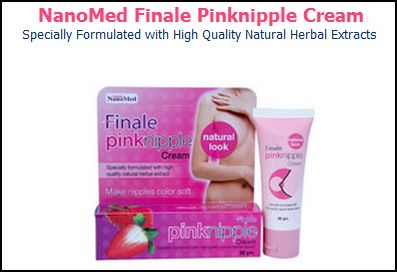 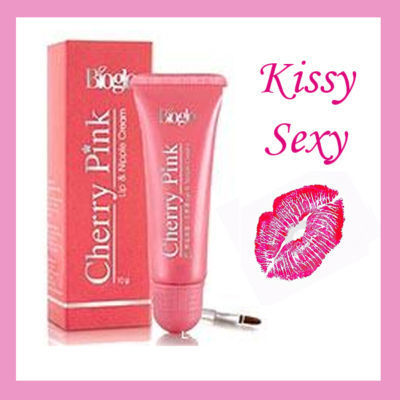 The rest are after the jump because the packaging shows images of breasts.

Sexualizing the Woman of Color in a Fernwood Fitness Ad

Lee D.T. sent in an Australian ad for Fernwood Fitness. It’s a great example of the sexualization of women of color, specifically (compared to white women). Notice that the white women in the ad simply exercise, but the ambiguously-raced woman with darker hair and skin gyrates, pumps, and poses.

Kai Wright at Colorlines discusses an “arresting” graph demonstrating downward class mobility among black and whites.  The bars represent the proportion of parents’ children that end up in the bottom fifth of income earners by race and income of the parent.  On the far left, you see that 31% of whites and 54% of blacks born into the bottom fifth remain the bottom fifth.  Poor black children, then, are more likely than poor white children to stay poor.

The remainder of the bars represent downward mobility.  You can see that, in every case, black children are more likely to be poor as adults than white children, no matter what class they were born into.  Among those born into the middle fifth, the statistically middle class, 16% of whites and 45% of blacks end up in the bottom fifth of income earners.  For the richest white Americans, the chance of ending up poor is statistically zero; while nearly one in ten of black children born rich will end up poor. 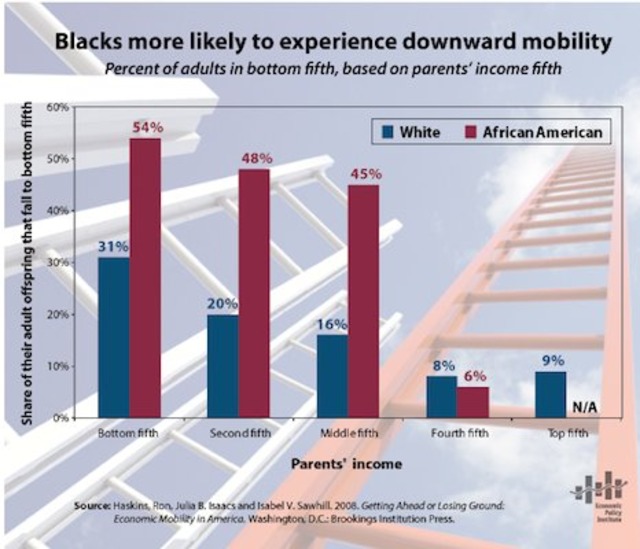 …economic mobility is not the same for everybody in America, and to the degree we can talk about a genuine black middle class, it’s not a terribly secure one.

The Vilification of Arabs in Hollywood Movies

Lester Andrist, at The Sociological Cinema, alerted me to a 9-minute short film revealing “Hollywood’s relentless vilification and dehumanization of Arabs and Muslims.”   Created by Jaqueline Salloum and Dr. Jack Shaheen’s book, Reel Bad Arabs, it is a stunning and disturbing collection of clips.  The depictions are grossly prejudiced and relentlessly violent.  Andrist summarizes:

It demonstrates the way Arabs and Muslims are consistently depicted as religious fanatics, perpetual terrorists, backwards, and irredeemably tribal… [T]he media consistently propagates the idea that the Muslim or Arab terrorist is not only a threat to life, but also Western civilization.
Taking the analysis a bit further, I think the clip also allows one to contemplate how these depictions of Arabs and Muslims are simultaneously about constructing an American national identity, and in particular, a masculine one. In several places, one sees how an American masculinity, characterized by stoicism and poise, is set in contradistinction to an irrational, Islamic fanaticism.

It’s really a worth a watch, but very disturbing.  Consider yourself warned:

The Media Education Foundation also made a full length documentary based on Shaheen’s book.  The 5-and-a-half-minute trailer is a good indication of its content.  It contains many similar disturbing depiction, including a discussion of Disney’s Aladdin, but also points to how Arabs are frequently shown as buffoons (“rich and stupid,” “oversexed,” and “uncontrollably obsessed with the American woman”).

See also our posts on how Arabs are portrayed in video games and Reel Injun, a documentary about the representation of American Indians in Hollywood.

Cross-posted at Ms. and Family Inequality.

In the early 1990s, Arline Geronimus proposed a simple yet profound explanation for why Black women on average were having children at younger ages than White women, which she called the “weathering hypothesis.”

It goes like this: Racial inequality takes a cumulative toll on Black women, increasing the chance they will have health problems at younger ages. So, early childbearing might pose health risks for White women, but for Black women it makes more sense to start earlier — before their health declines. Although it’s hard to measure the motivations of people having children, her suggestion was that early childbearing reflected a combination of cumulative cultural wisdom and individual adaptation (for example, reacting to the health problems experienced by their 40-something mothers).

She showed the pattern nicely with data from Michigan in 1989, in which the percentage of first births that were “very low birthweight,” increased with the age of Black women, but decreased for White women, through their twenties: If the hypothesis is correct, she reasoned, the pattern would be stronger among poor women, who experience more health problems, which is also what she found.

The most recent national data, for 2007, continue to show Black women have their first children, on average, younger than White women: age 22.7 versus 26.0. And the infant mortality rates, by mothers’ age, also show the lowest risk for White women at older ages than for Black women:

Source: My graph from CDC data.

Note that, for White women, mothers have children in the early thirties face less than half the infant-mortality risk of those having children as teenagers. For Black women, waiting till their lowest-risk age — the late 20s — yields only a 14% reduction in infant mortality risk. So it looks like waiting is much more important for White women, at least as far as health conditions are concerned.

The implications are profound. If you base your perceptions on the White pattern, it makes sense to discourage early childbearing for health reasons. But if you look at the Black pattern, it becomes more important to try to improve health problems at early ages — and all the things that contribute to them — rather than (or in addition to) trying to delay first births.

Cohen’s previous posts featured on SocImages include ones on the recession and divorce data, the relationship between cell phone use and driving deaths, measuring the number of welfare recipients, delusions of gender dimorphism, and the gender binary in children’s books.

The Social Construction of Age: How Old is “Too Young”?

Delia B. sent along this 80s-riffic, apocalyptic music video featuring Gossip Girl’s Taylor Momsen singing Make Me Wanna Die. Momsen is a 17-year-old teen idol who strips naked over the course of the video. Her naked body is eventually obscured, but not before we get a good look at her in her bra and underwear.

On the one hand, because Momsen is 17, one could argue that this video is encouraging the sexualization of underage girls and child pornography (which involves, by definition, children under age 18).

On the other hand, this video is, relatively speaking, pretty sexually tame.  I imagine that most Americans would not think that this would incite pedophiles and that many would argue that she’s perfectly old enough, given that she’s an actress/rock star, to be stripping down to her undies. Not to mention the fact that the average age of virginity loss in the U.S. is about 16.

The video is a great opportunity, then, to have a discussion about the social construction of age.  To start: What age is “too young” and what age “old enough”?  What’s the difference between 17 and 18?  Is the difference equally meaningful for everyone?  Should we codify such meanings into law?  And do today’s laws reflect our contemporary culture mores?  According to who?

The Intersection of Race and Gender in Diesel Ads 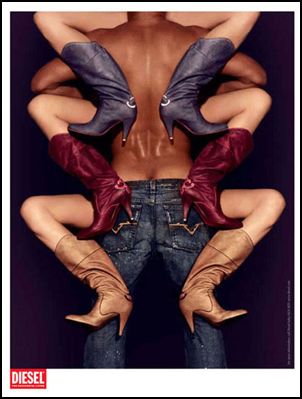 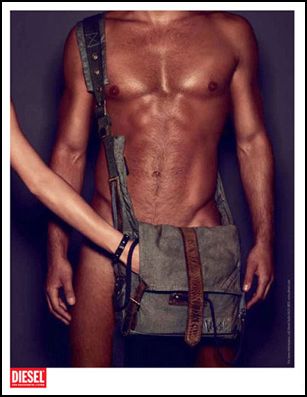 Jordan thinks that Diesel is following American cultural rules that gender race and racialize gender.  For example, if I may quote myself:

For more, see our posts on asymmetry in interracial marriage, how Asian women are marketed to white men, and data on race and response rates on a dating website.

Allegra K. suggested that we take a look at Palin-based pro-conservative message from PalinPAC for this past November’s election. The nearly-two-minute commercial is an excellent example of a gender-specific populism. We recently discussed populism in response to Christine O’Donnell’s “I’m Not a Witch, I’m You” commercial.  Populism is, by definition, in opposition to elitism.  Political populists believe that the average person is better suited to lead than the exceptional person.  In this ad, Palin attempts to personify not just the average person, but the average mom.  Allegra writes:

Throughout the video, numerous women are pictured. However, they are a specific type: they are the “real” women; not models, or especially good-looking, dressed up, or even business or political figures. They are “average moms”…

The average woman, according to Palin, is the American hockey mom (just like her), who is (supposedly) middle class, an at-home mom, who cooks and cleans, takes her multiple children to school, and then to after school sports, probably drives a mini van, and uses Clorox on her sons’ jerseys after they get muddy at practice.  Palin puts the power of change in their hands because, she says, “moms just kinda know when somethin’s wrong.”

A “just kinda know” kind of knowledge (based on the notion of female intuition) is a great example of Palin’s gendered populist message.