The Oil Industry vs. Oklahoma

One of the concerns of environmental sociologists is the way that harm is unequally distributed. The way, for example, that poor people and people of color are more likely to live with high levels of lead, near toxic release facilities, with bad air quality, and in the paths of airborne pesticides.

I thought of this research when I saw Time‘s 1-minute illustration of the rise of earthquakes in Oklahoma. To sum, thanks to the particular type of oil drilling done there, the state is now “one of the most seismic places on the planet.” There were 21 earthquakes in 2005. In 2015, there were 5,957. Nine hundred of these were magnitude 3 or higher. 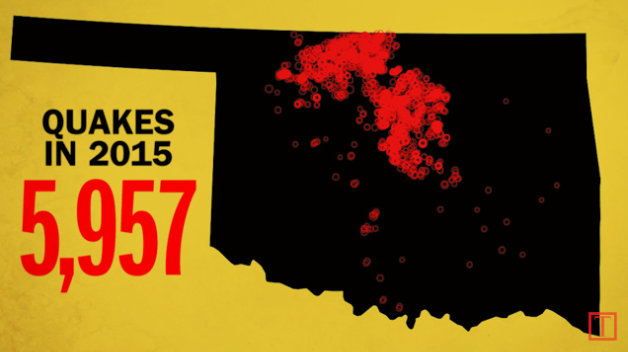 I am trying to imagine what would happen if an industry caused almost 6,000 extra earthquakes annually (and growing) in or near a city America cared about. I’ve lived in Los Angeles and New York and, I can’t be sure but, I suspect politicians there might be quicker to interfere with business practices. And, if they weren’t, the political power of residents of those cities might force them to.

“But it’s just Oklahoma,” is apparently the refrain. Who cares if the oil companies’ saltwater disposal wells are causing the houses of hillbillies to shake? Apparently Okies don’t have anything — aren’t anybody — worth protecting. At least, not over the rights of corporations.

Do you have any comments on why fracking is being done in Baldwin Hills and not Beverly Hills? Just because fracking has not been definitively found to be the cause of an earthquake there doesn't mean it won't be responsible in the future.
http://www.latimes.com/local/california/la-me-0504-baldwin-hills-quakes-20150504-story.html
http://www.reuters.com/article/us-usa-fracking-california-idUSBREA4603O20140507

There is also the increased VOC emissions around fracking sites, a la Porter Ranch.

I am curious about how this lines up with Reservations in OK, too.

I think the biggest issue might be that the converse, Oklahoma vs the oil industry, can't exist. Seems state government funds are tightly connected to oil revenues. (They keep saying our current deficit is due to the drop in oil prices.) So how does the state survive with less from oil funds if it's hurting because those are too low already? I haven't heard an answer from the capitol on that.
Aside from that, Oklahoma's major population centers of Oklahoma City and Tulsa haven't felt very strong shaking. While it's gotten to the point that citizens have demanded action enough that the state has had to make time to listen and then at least pretend to investigate taking proper action, the simple fact is that most Oklahomans, particular those in the cities with more power, haven't felt more than minor shaking across some distance. I'm pretty sure a 4.5 in OKC would prompt more action than the 5.1 in Fairview, a city of about 2500.
I live in northwest Oklahoma and, unfortunately, regularly contribute to USGS data through "Did You Feel It?". Honestly, I just don't think there are enough of us to complain loud enough that the state will be quick to crack down on the companies that do deep well water injection. Yet. If Ponca City, Enid, Woodward, or anywhere else that amounts to a "big city" in the region start crumbling from the quakes, maybe that'd be enough. Otherwise it'd be a strong one or two near the metros. Otherwise, I'm afraid we've good while to wait. I hope I'm wrong.

There is also the way in which local geology plays into the equation. In other words, high volume hydraulic fracturing does not - by definition - lead to as many earthquakes as we see in Oklahoma. A major example of why these two are not always linked can be seen in North Dakota: the Bakken fields have 2,000-3,000 new wells drilled each year, but the seismicity has not increased (at least not according to the near-zero seismicity recorded by the USGS from 1973-2012; http://earthquake.usgs.gov/earthquakes/states/north_dakota/seismicity.php ).

Yes: seismicity *can be* a major negative consequence of fracking, but it isn't *necessarily* a consequence everywhere fracking is occurrring.

NOTE: the lack of earthquakes in North Dakota is *not* to say that the story there is all hunky-dory; far from it. The state is seeing many negative consequences - both environmental and social - from the major boom in natural gas extraction in the state... but earthquakes is not (yet) one of them.