The phrase “environmental racism” was coined to draw attention to the ways in which exposure to environmental toxins like air pollution and lead is not even across cities and states, but tends to be higher in low income neighborhoods — especially those that are disproportionately Black and Latino — ones that are also more likely than others to be home to garbage dumps, sewage treatment plants, and power plants.  As a result, poor children and children of color are more likely to suffer the consequences of environmental pollution, like asthma and lead poisoning.

Prevention efforts, however, tend to focus on parents’ responsibility for protecting their children from these threats instead of the state or city’s failure to keep all neighborhoods equally safe. For example, even though it’s illegal for landlords to rent out a house or apartment with lead paint, poisoning prevention efforts tend to focus on educating parents.  I thought of this tendency to blame the victim when I noticed a set of billboards going up in my neighborhood in Los Angeles, Highland Park.  Meant to encourage parents not to smoke, they read (in English and in Spanish): “I gave you love, you gave me asthma.” 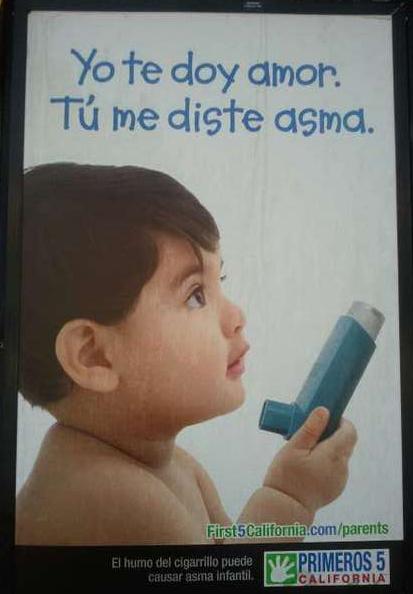 Highland Park is a low-income neighborhood.  And given what we know about the inclination for cities to tolerate environmentally harmful conditions in low income neighborhoods, this seems to me a particularly nasty message to send.  It erases the role of the city in protecting children and places 100% of the blame on parents (“you gave me asthma”), and then it twists the knife (“I gave you love”). Even if they are smokers, poor parents can only do so much to protect their children from things that the city is all-to-comfortable letting slide.

But this is an anti-smoking campaign, isn't it?

It does say "Cigarette smoke can cause asthma in children" a the bottom.

Maybe I am missing something ( could be, I am just a casual reader of the blog and sociology in general ), but a general "stop smoking, it hurts your children" isn't so bad, is it?

Maybe there is an american-centric angle I am missing there....

"For example, even though it’s illegal for landlords to rent out a house or apartment with lead paint, poisoning prevention efforts tend to focus on educating parents."

Pretty much all of that is wrong. First of all, in California it is completely legal for landlords to rent out a house or apartment with lead paint. They have to disclose its existence to renters (or, if the place was built in the Time Of Lead Paint, the possibility of its existence), and they have to provide information on how to avoid lead poisoning in lead-paint-containing homes.

Secondly, poisoning prevention efforts go much further than publicity. The government is legally required to clean up HUD-owned housing with hazardous levels of lead. There is also a federal program to pay for removing lead paint from low-income households with young children, which has spent over $20 million in California alone. So saying that prevention efforts "focus on educating parents" is silly. Of course parents have to be educated to (a) know that there's lead in their paint, (b) that it's a problem for their kid, and (c) that the government will help them get rid of it. But the lion's share of those funds aren't being spent on accusatory posters, it's being spent on fixing things.

Ha, I meandered over to socimages to avoid studying for my environmental justice final. Figures the first post I see is about environmental racism. ;)

Here's another element to this...I live in LA's Koreatown neighborhood where the posters have an Asian child and are in Korean. Do any of these posters feature white kids, or is it only minorities who don't know that secondhand smoke harms children?

Umm... but parental smoking is a huge contributor to children's asthma and is something that parents actually can control. So it makes sense that public health campaigns would focus on this totally preventable cause of childhood asthma. Honestly, parents should be criticized for smoking around their children. It's terrible judgment. The fact that these campaigns are directed at racial minorities reflects the fact that this is a particular problem among lower-income people of racial minorities. These campaigns are trying to improve the health of these populations, thereby decreasing health disparities. It's a silly knee-jerk response to assume that, because the target audience is a racial minority, the campaign must be a "nasty" (racist, classist) message.

Garbage dumps have not been shown to cause asthma, whereas smoking in the home has been directly linked to it.

Sorry to be that guy, but you have a typo: "all-to-comfortable".

A thought that occurred to me when I read the environmental racism bit is that it's part of how cities are planned. You can experiment with that when you play Sim City. You cannot simply build housing far from your factories (I tried because I am nice that way) you have to build housing next to industrial properties too, because otherwise your workers can't afford to live.

The emotional blackmail is awful. Hey, we're white, middle-class Kiwi parents; one non-smoker (mother) one ex-smoker (father) and 2 out of our 4 kids have asthma. Sometimes it's just one of those things... in our case, partly genetic (there is a history of it in my family) and partly because of where we live (New Zealand has very high asthma rates).

I agree smoking can be a factor and I agree with what Lisa is saying about environments/environmental factors. But I strongly disagree with blaming myself and other parents of asthmatics for the (bad) luck of the draw.

Public health interventions are most effective when you try to target as many component causes of an illness as possible. If you can't reduce the risk from the biggest contributor (I am not sure what the largest component cause of asthma is), then you try to reduce the one you may have the biggest effect on. A parent may pay attention to a billboard, whereas the factory owners may not.
That billboard is also presented in English. If you go to the website provided at the bottom of the ad, it gives you the option to see child health information for parents in a few different languages. If the ad wasn't in Spanish, there would be complaints that minorities are being passed over by health awareness.
I understand being aware of racial disparities in advertising, but I don't think this PSA is victimizing minorities.

I'm with you on much of what you said about environmental racism, but to me it's almost unrelated to this ad campaign. Kids who have a parent who smoke are twice as likely to have asthma as kids whose parents don't. Hell, I'd have no problem if the ad said "If you smoke around your kids, you're a selfish asshole."

I like this article because it challenges the notion that health issues that seem to be highly associated with being poor like asthma, obesity, and diabetes are only about personal responsibility. I think the point is posing the question of why are these populations more likely to smoke and eat terrible food. People who can't afford decent housing have no choice but to live (and work) in dangerous conditions. The question is why society is ok with that.

As for the ads, anyone who works in addictions will tell you that in the long term, guilt and shame are not effective motivators for changing anything. They're great at making people feel terrible about themselves though, so kudos to whoever came up with the campaign.

As we saw with Katrina, low-income neighborhoods are also more likely to flood because they're on the least-desirable land. This leads to mold and cockroach infestations, two more contributing factors to asthma.

Low income neighborhoods in Metro LA (as well as other cities) tend to be afflicted by many other environmental issues that contribute to asthma. Some could be eliminated with better (i.e equal) city planning and urban design. For example:

It's also important to recognize that many families in low-income, poorer communities are more likely to share housing with extended family and friends to conserve on resources etc. While the parents themselves may not smoke, other cohabitating members may be contributing to secondhand smoke - like the neighbors, the border, friends or grandparents that contribute financially to the household or provide some other care support. People often look the other way as to not offend and create discord that could possible sever available streams of income.

A better campaign would be to acknowledge the effects collectivism and familism among various cultural groups to address the community aspect of child-rearing (in the vein of "It takes a Village...")and say that in OUR community NO ONE smokes among OUR children.

OK - but all this being said. It is ALL OF OUR FAULTS THAT KIDS HAVE ASTHMA.

Its a painful truth, but parents are responsible, city planners, everyone who drives a car. Its a harm we created and I don't think there is any benefit to lightening the language.

[...] Lisa Wade on Sociological Images The phrase “environmental racism” was coined to draw attention to the ways in which exposure to environmental toxins like air pollution and lead is not even across cities and states, but tends to be higher in low income neighborhoods — especially those that are disproportionately Black and Latino — ones that are also more likely than others to be home to garbage dumps, sewage treatment plants, and power plants. As a result, poor children and children of color are more likely to suffer the consequences of environmental pollution, like asthma and lead poisoning. [...]

Okay, I'm a bit confused on this one. I have asthma, but so does my mom, so I'm wondering if it is not also a genetic disease. Where I come from, Arizona, asthma and allergies are prevalent. It is rare to meet someone who doesn't have these problems. Historically, many people with asthma moved to Arizona to improve their asthma, and as I said, many people today in Arizona have asthma. So is a genetic disposition not a possibility and therefore out of a parent's control?