The figure below, borrowed from Matthew Yglesias, shows that poor children, especially poor black children, have higher concentration of lead in the blood than other middle class children. 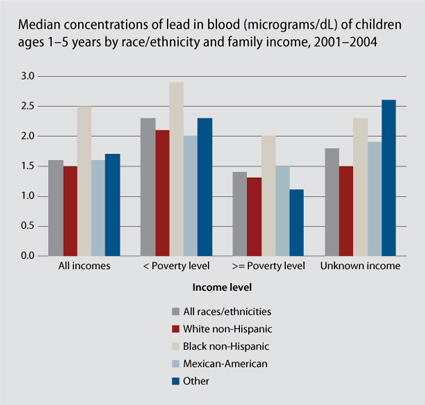 Lead poisoning is a serious problem, causing cognitive delay, hyperactivity, and antisocial behavior. If poor children do less well in school and on standardized tests, it may be, in part, because of the environmental toxins to which they are disproportionately exposed.

See also a previous post in which I argue that lead poisoning remained a mother’s problem until the China toy scandal put middle class children at risk, at which point the state stepped in to ensure children’s safety.

Also see this post on race and toxic release facilities.

This page seems to give extended background about the study -
http://www.scienceprogress.org/2009/07/evidence-mounting-that-chemicals-in-the-environment-are-damaging-reproductive-
health/

Evidently all of the statistics are from New York city.

(I'm just highlighting a couple of crucial details that are in Yglesias' post.)

As a feminist and environmentalist, this makes my heart hurt. And unfortunately, the implications of higher toxins in poor communities extends beyond lead--PVC, pesticides, the list goes on and on...

Does anyone else find it curious that Asian/APA is not a category, but forced to be lumped under 'other'? That's a huge category! And what about everyone of Latin descent NOT from Mexico?

other races are sub-human.