Why and How People of Color are Included in Advertising: 2nd in a Series

Non-white people are increasingly being featured in advertisements and a principled interest in “diversity” is not the only, or likely even the main motivation.

In this series, I share some ideas about why and how people of color are included in advertising aimed primarily at whites.  This post is about the inclusion of people of color in ads to invoke the idea of “color,” “flavor,” or “personality.”

Consider, this ad for Absolute Vodka Peach (“Find Your Flavor”) includes two white and two brown people, plus a set of silhouettes. 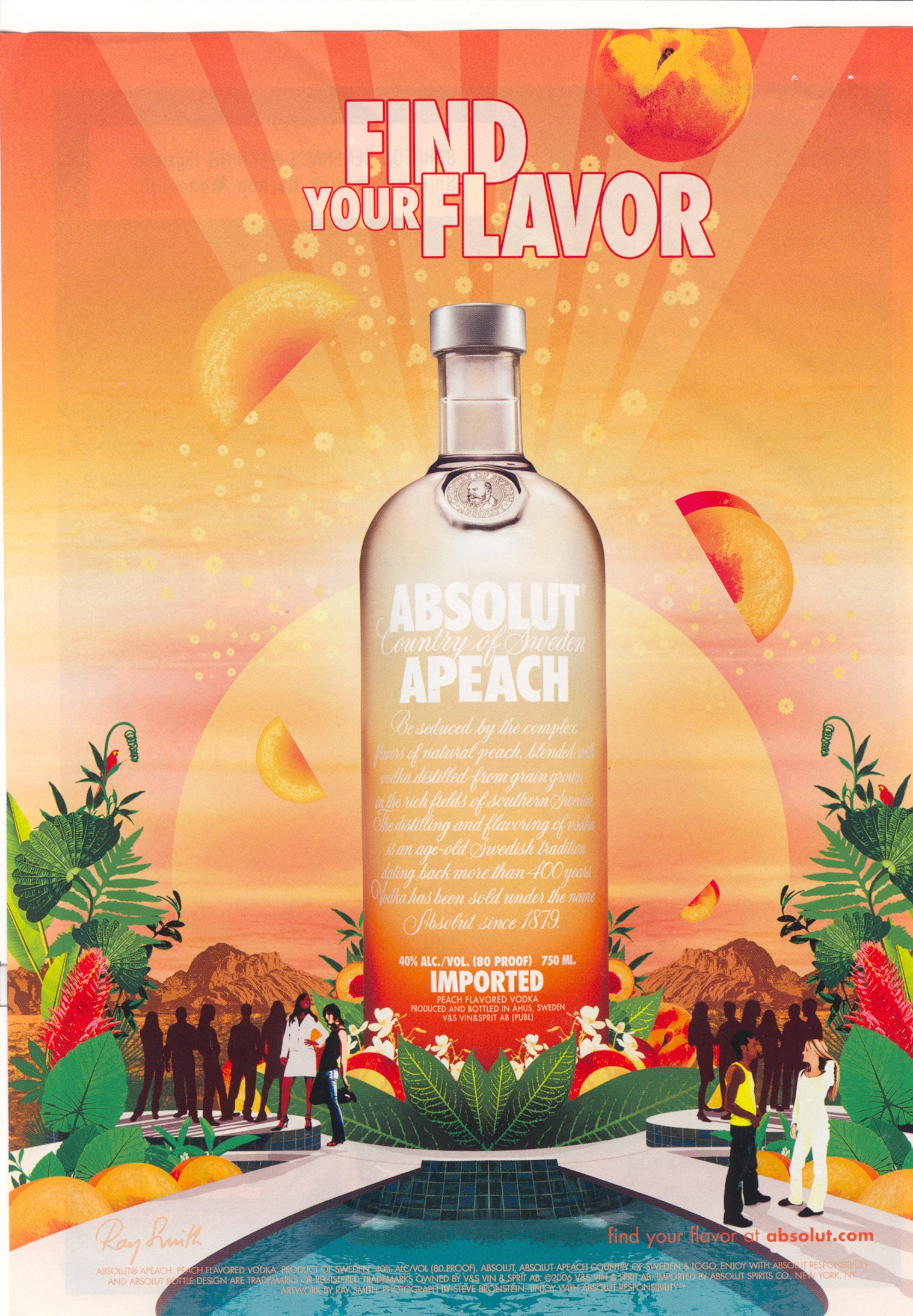 Holly F. and Lafin T.J. sent in three Life cereal box covers.  Notice that “regular” Life has white people on the cover, while cinnamon and maple and brown sugar flavors have people of color on their covers:

In this pro-diversity ad, spice is literally used to represent diversity (via MultiCultClassics).  (Just a bit misguided too: Just a teaspoon or less of color, please.)

This ad for Samba Colore by Swatch also uses a model of color: 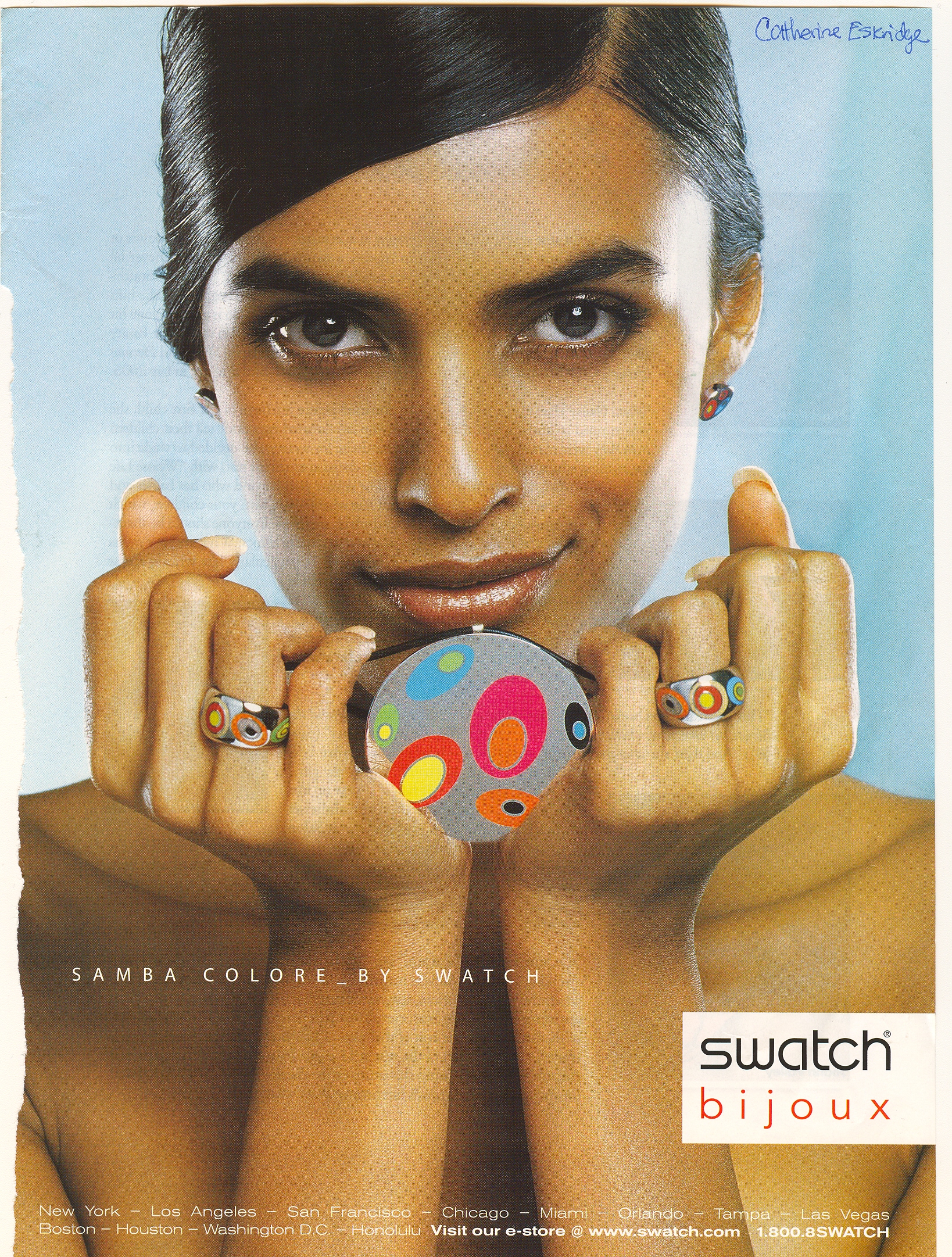 “Welcome to the Color Factory.”  These two ads for a color photo printer and a color printer cartridge both use models of color alongside white models in order to express how “colorful” their product is. 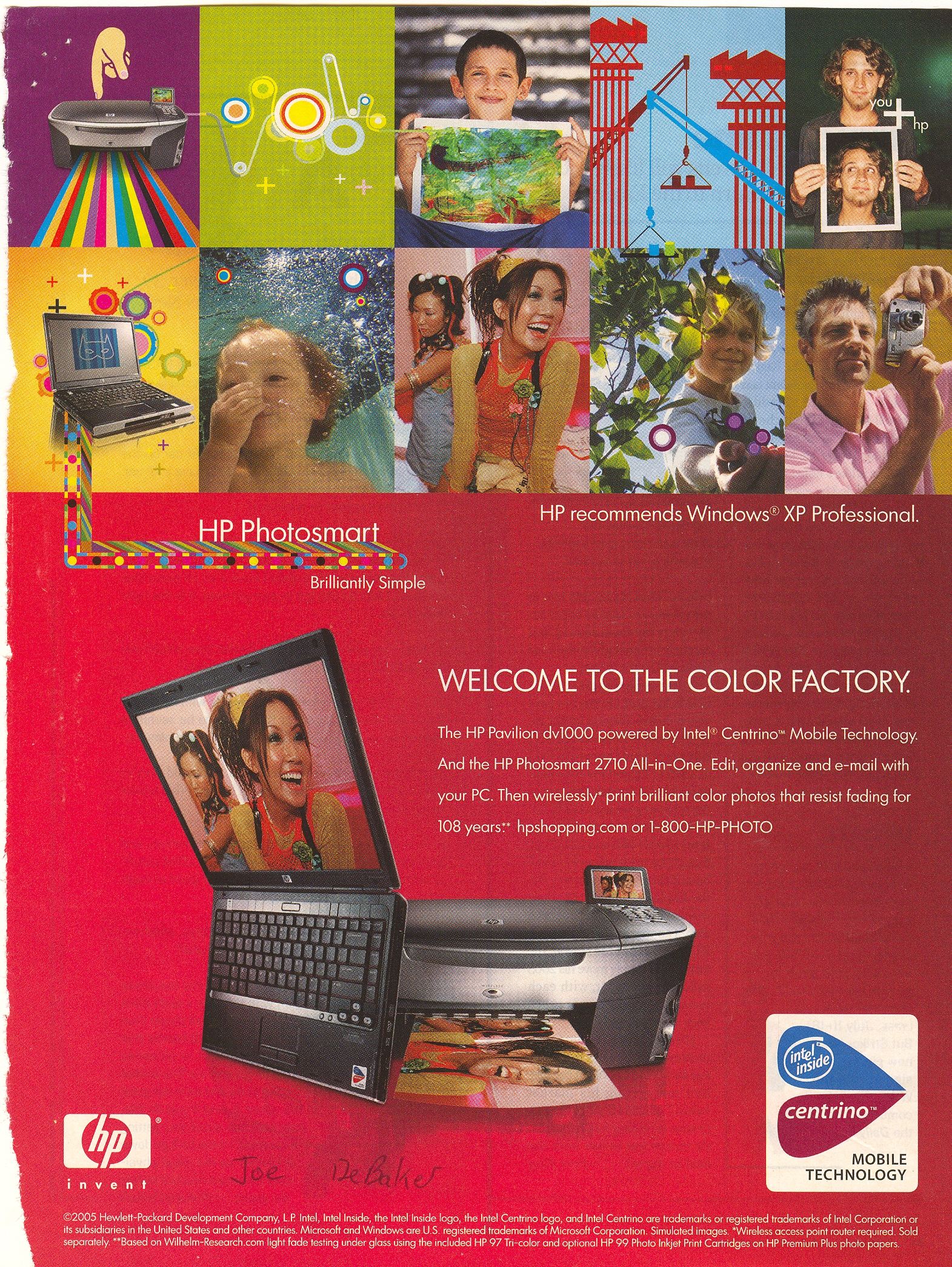 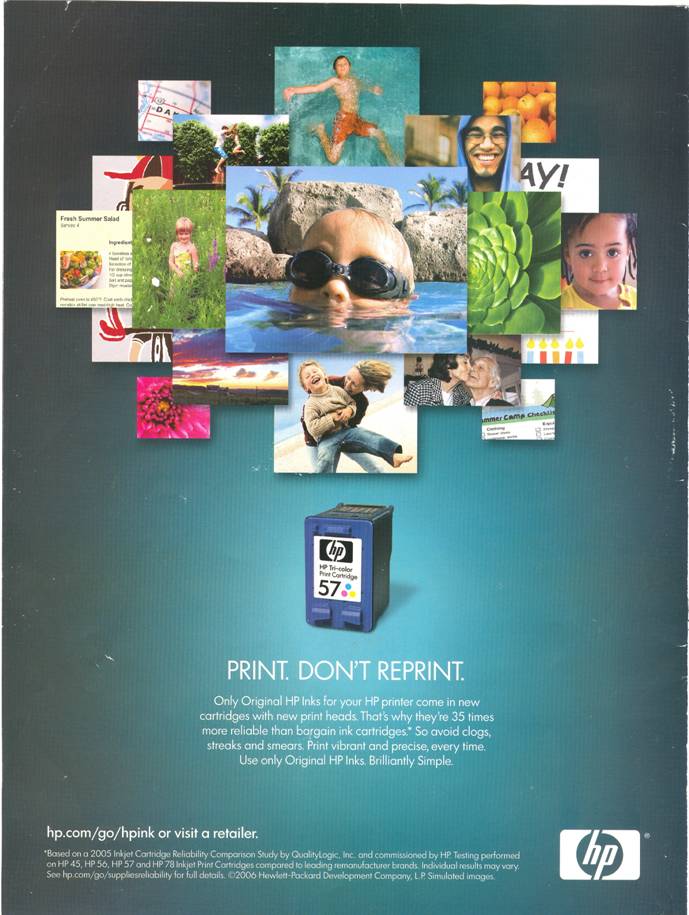 Bri sent in these four images (three from Gap and one from United Colors of Benneton).  Each Gap ad is advertising a different product, with an emphasis on how many colors they come in (bottom right corner).  They all, also, feature models of color.  Here’s just one of them: 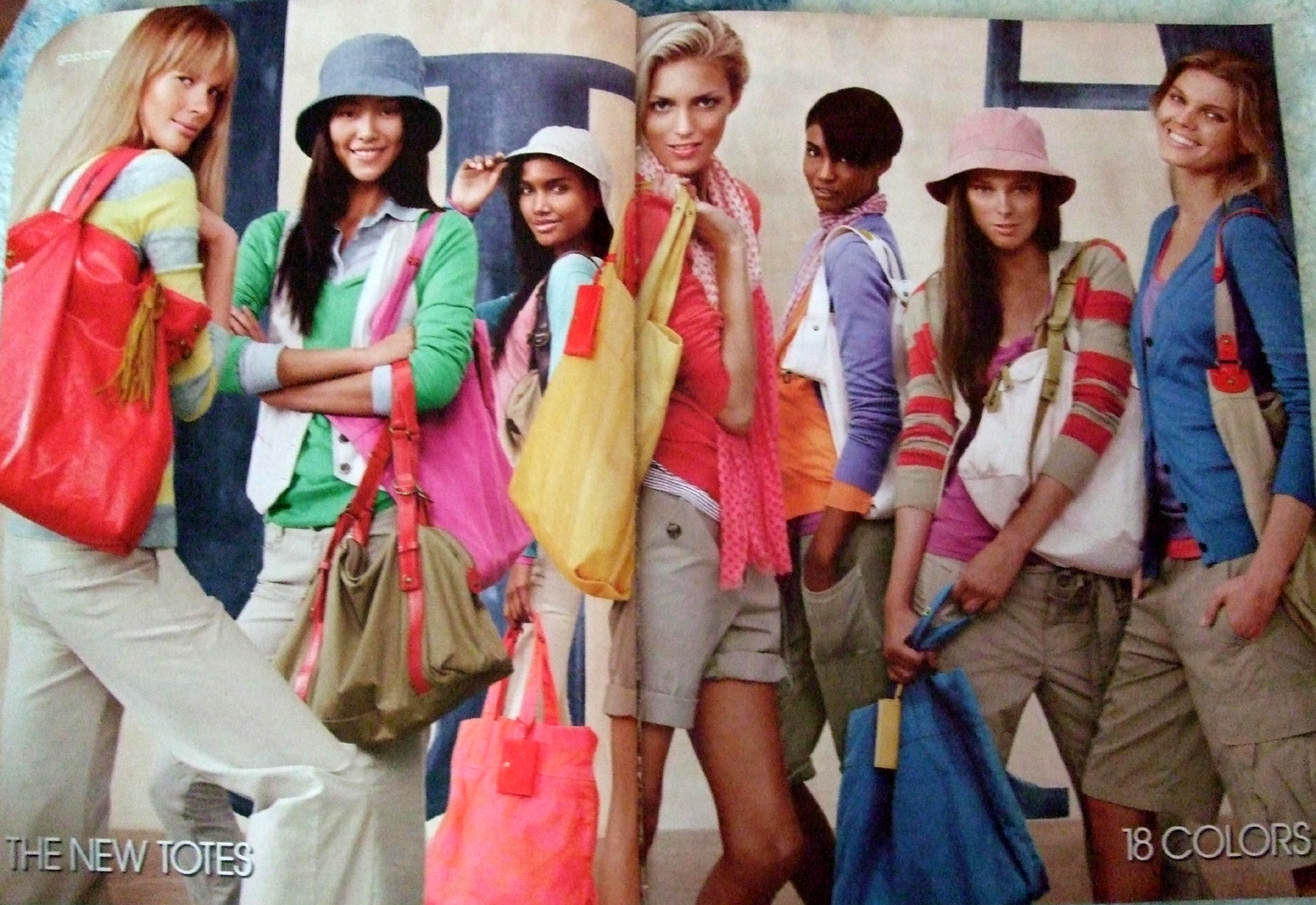 And, of course, the United Colors of Benneton is famous for its use of models of color in its ads, blending quite purposefully the idea of clothing colors and skin colors: 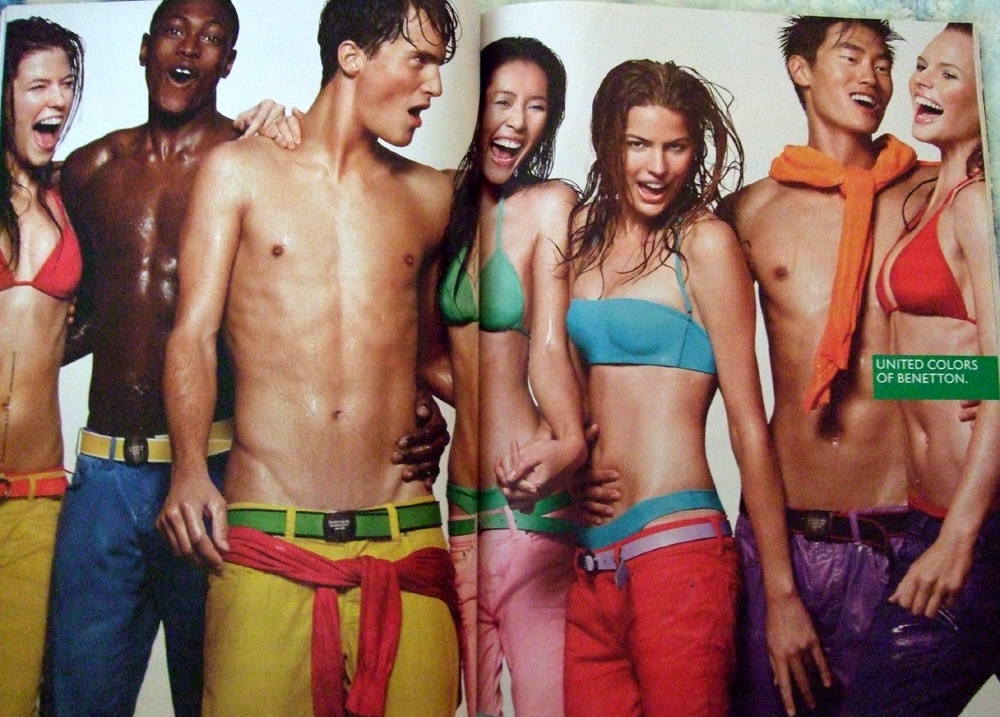 Finally Joshua B. sent in this photo of two french fry holders, one with a black and one with a white woman, reading “never a dull moment, only tasty,” and “Is it wrong to think Arby’s all the time.”  The black woman, then, is presented alongside the ideas of excitement and flavor: 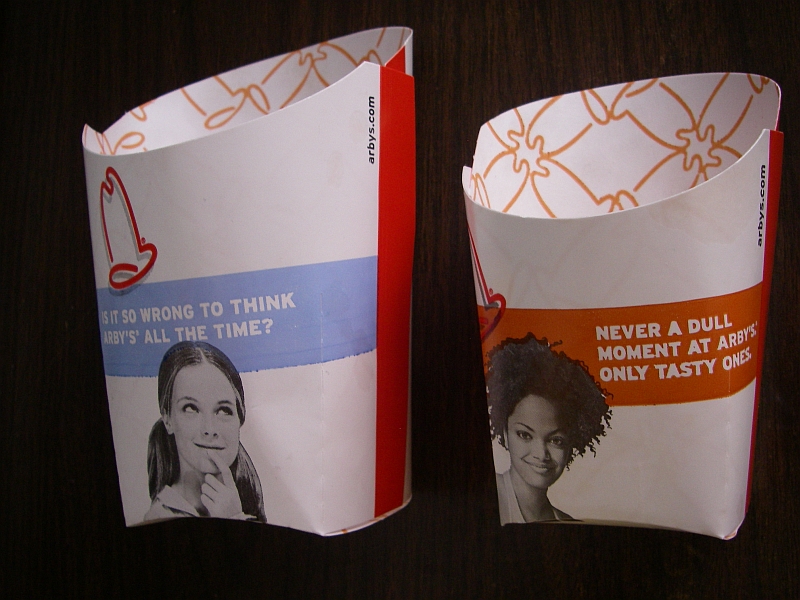 There is also this Crystal Light ad campaign that compares water to a “pale” white woman and crystal light to a “pumped” black woman and these ads for an Australian bread company that use Blackness to argue that their bread is not bland.

This kind of advertising can easily be explained away as coincidence, but I think it’s a pattern.  Feel free to send in examples and counter examples if you see them.

In my entire life, I have only seen one tv commercial that had a hint of interracial in it. I think it was a computer commercial and it had a white father and his two black sons. There was no black wife present.

I must be missing something - those two last ads don't seem to have any 'people of color' in them except what looks to be heavily diluted hispanic..It actually struck me that they seemed entirely white, despite a number of people being in the ad.

I agree with Dreikin, I too thought the "colorful" ad was surprisingly devoid of "color".

I remembered an ad you would've loved. It ran in my university student newspaper in either the late '70s or early '80s, for Southern Comfort. There was a young, attractive white couple who were wearing what looked like tropical-style tourist clothes, pictured with an old black man with a banjo. The caption was something like "Southern Comfort...As rich in heritage as a bluegrass banjo plucker." Unfortunately, I no longer have it.

The best part: it was printed on the same page as a very irate article about apartheid in Africa.

Sociological Images » HOW AND WHY PEOPLE OF COLOR ARE INCLUDED IN ADVERTISING: 4TH IN A SERIES — September 30, 2008

[...] in order to associate the product with a racial stereotype (i.e., hipness, intelligence).  In the second, I showed how people of color can be used to give a product “color” or [...]

Sociological Images » why and how People of color are included in advertising: 1st in a series — November 30, 2008

Sociological Images » WHY AND HOW PEOPLE OF COLOR ARE INCLUDED IN ADVERTISING: 3RD IN A SERIES — November 30, 2008

Sociological Images » HOW AND WHY PEOPLE OF COLOR ARE INCLUDED IN ADVERTISING: 6TH IN A SERIES — December 6, 2008

[...] “white,” “vanilla” world.  Illustrating this idea, I offered this post and this link to recent Crystal Light [...]

Sociological Images » HOW AND WHY PEOPLE OF COLOR ARE INCLUDED IN ADVERTISING: 5TH IN A SERIES — March 7, 2009

Those Crystal Light TV ads from last year--not the newest ones with the Estelle song, though they are reminiscent--showed women of color shaking up the powdered mix in water bottles while the voice-over said something like "add some color to your water." Google isn't coughing up the ad for me. Anyone else remember this?

Duh, I just realized I missed the comment at the end about a print version of that Crystal Light campaign! Wish I could find a video for the TV version.

[...] before on the way that black people are fetishized in the U.S.  It is as if they are, literally, more colorful, more interesting, cooler, hipper, even spicier.  White people, in contrast, can seem bland, boring, vanilla, even whitebread.  From this [...]

[...] accessories” and the descriptions are repleat with words like “drumbeat,” “spicy,” and “tribal.”  I summarize some of Muse’s analysis after the [...]

[...] a minority frontman to their band. White people turn ethnicity into a commodity all the time. Sociological Images

HOW AND WHY PEOPLE OF COLOR ARE INCLUDED IN ADVERTISING: 9TH IN A SERIES » Sociological Images — August 12, 2009

HOW AND WHY PEOPLE OF COLOR ARE INCLUDED IN ADVERTISING: 8TH IN A SERIES » Sociological Images — August 12, 2009

[...] our post discussing how people of color are often included in ads as symbols of flavor, color, or spice, we added a comparison of two McDonald’s french fry containers sent in by Joshua [...]

Sometimes I think people look a little bit too much into this. I work at the Gap, I'm in charge of all the visuals and marketing for my store, and I can tell you that group of models were used for well over a year of campaigns, yes that spring one and the christmas one did happen to revolve around color, but they were also in denim on denim ads, white shirt ads, and black and white photography. So is a company supposed to use only white models when advertising colorful clothing so as to not offend anyone? That seems more offensive than trying to be inclusive.
http://www.nitrolicious.com/blog/2009/06/04/gap-spring-summer-2009-ad-campaign-more-pics/
http://1.bp.blogspot.com/_NBIrK1oBxAc/S4s0L9vYmfI/AAAAAAAAAM4/oDve4YRyqRw/s1600/Gap+Spring+2010+3.jpg
Just look at how offensive that is, I hate when they use people from a range of different backgrounds to evoke a sense of so many different shades of blue.
Same with the vodka ad, there are white people in that ad too, so wouldn't their skin color also be seen as flavorful? Maybe they used both skin tones to be inclusive, not even thinking of the flavor connotations. Yeah sads are obviously playing into stereotypes, the bottom two examples seem pretty egregious to me, but I also think sometimes people just are looking for things to pick apart and put ads in a place where they are damned if they do and damned if they don't.

More 'color for the sake of color':
Levi's -
http://www.wk.com/wke/show/we_are_all_workers
http://www.mediapost.com/publications/?fa=Articles.showArticle&art_aid=130827&nid=115850

[…] unself-aware fans who try on others’ trauma in search of something different or interesting or cool. White girls who use words like Fearless or Queen without understanding the historical […]

I recently purchased hp ink 652, the best thing it is most reliable ink because it is compatible with most of the printers of HP and Canon.
"Thank you for sharing, Keep bringing more.
Have a great one ahead!!
Cheers!!"

[…] are those that are eye-catching and at the same time evoke the right emotions. This Absolut advertisement radiates confidence for those dipsomaniacs who want to have a smashing time. The domineering orange […]

thank you for this and i want look for that