Why and How People of Color are Included in Advertising: 3rd in a Series

In this series, I offer a typology reflecting the ways in which people of color are used in advertising aimed primarily at whites (see the first and the second in the series).  In this, the third edition, I suggest that sometimes people of color are included because the idea of “diversity” triggers the related ideas of “cool,” “hip,” “urban,” and “youth,” which also invoke “modernity” and the idea of being “global,” “cosmopolitan,” even “progressive” politics.

In this ad, a mix of races are used.  Notice that the ad also happens to include, in the bottom image, photography, what looks like a dark beer, and espresso (all “upper class” “sophisticated” interests) and, in the top image, we see that the woman who appears Asian is an art dealer. 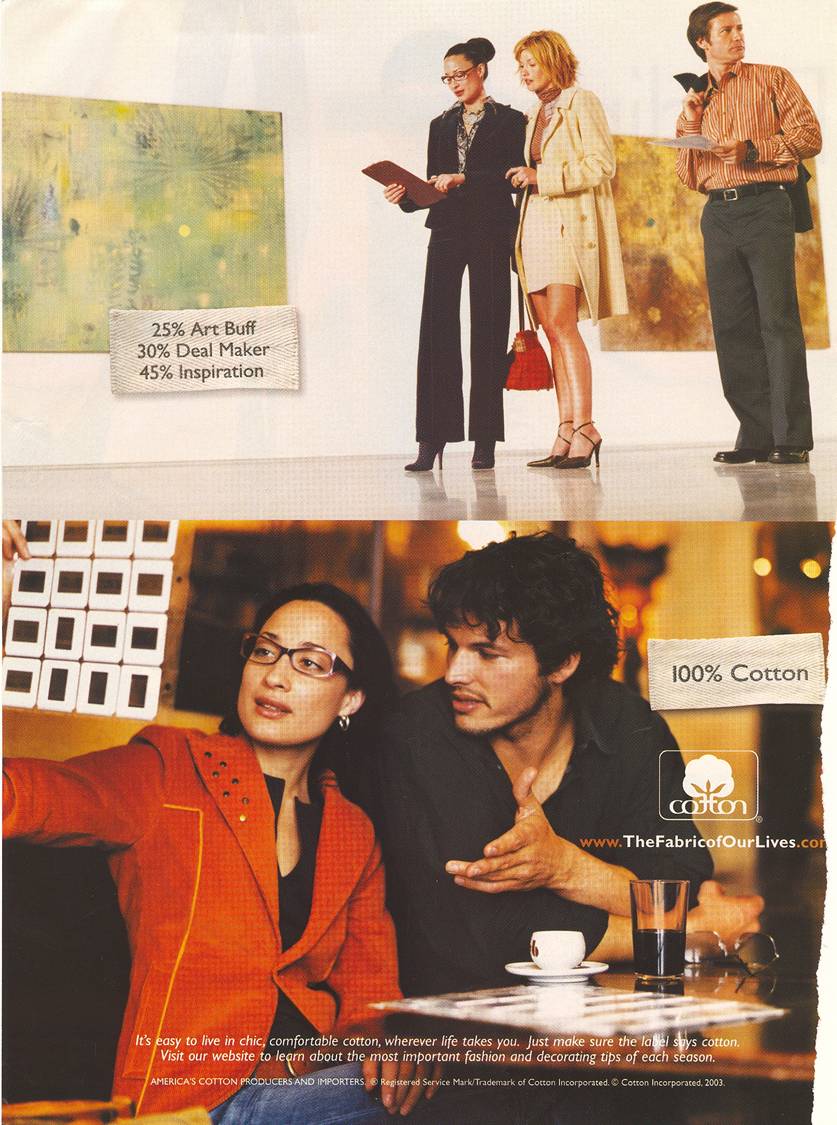 In this next ad, again, we see a mix of races enjoying what looks like a train ride (how European!) with hard liquor.  The text:

The shortest distance between two places isn’t nearly as interesting.

I think it is no accident that “interesting” and racial difference are both present in this ad. 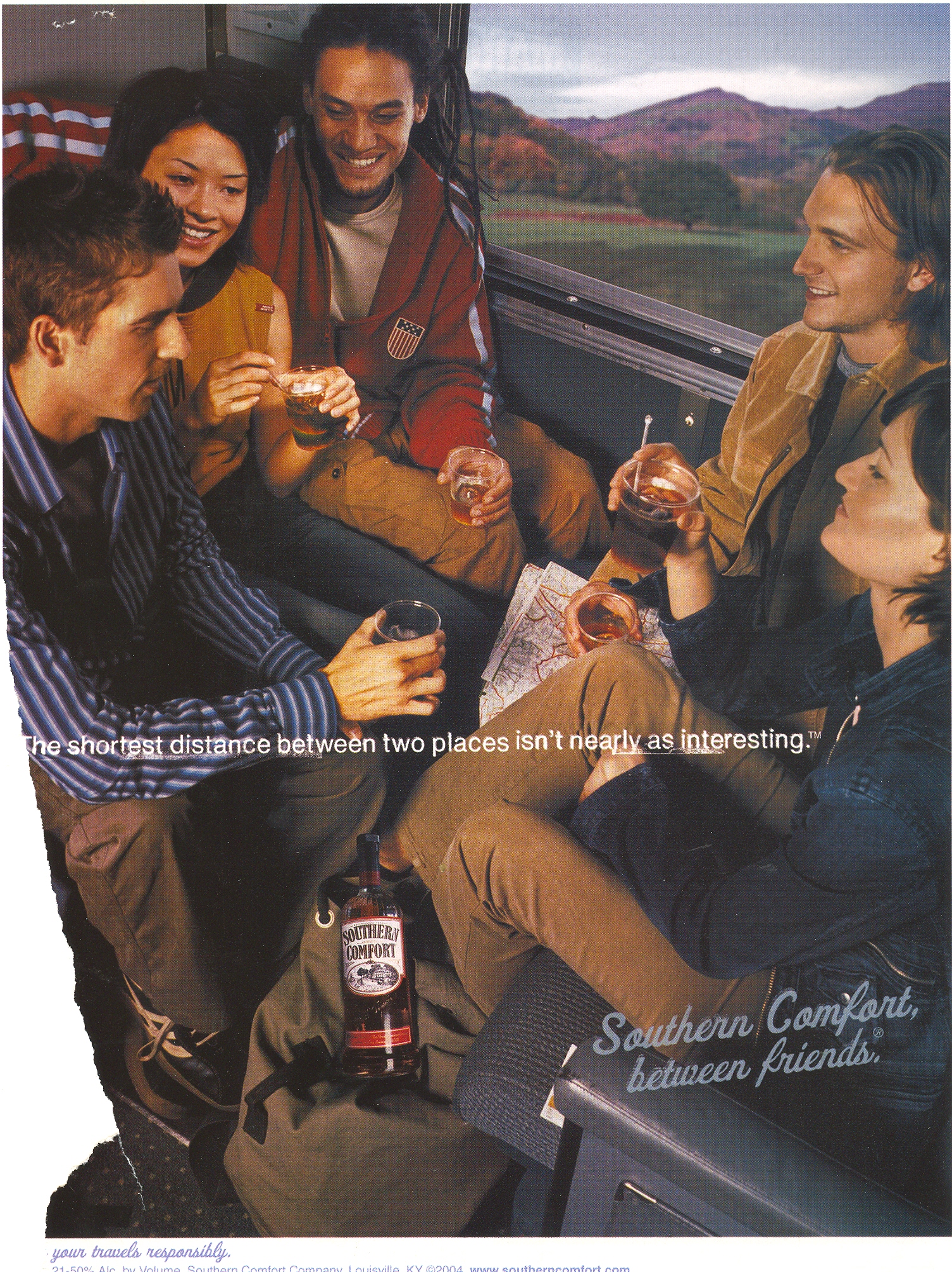 In this next ad we see a racially ambiguous male and a black woman.  Notice the clothes that they are wearing (casually sophisticated) and the delicate nature of their coffee cups.  This is leisure, not some working-class Joe with a cup o’ joe.  Text:

3658 miles from the coffee fields of the Columbian Andes.  But still the perfect climate for Colombian Coffee.

The idea of travel, of course, invokes a certain degree of cosmopolitan-ness and wealth.  And the “perfect” climate refers not just to weather, but to the kind of company Colombian Coffee drinkers keep. 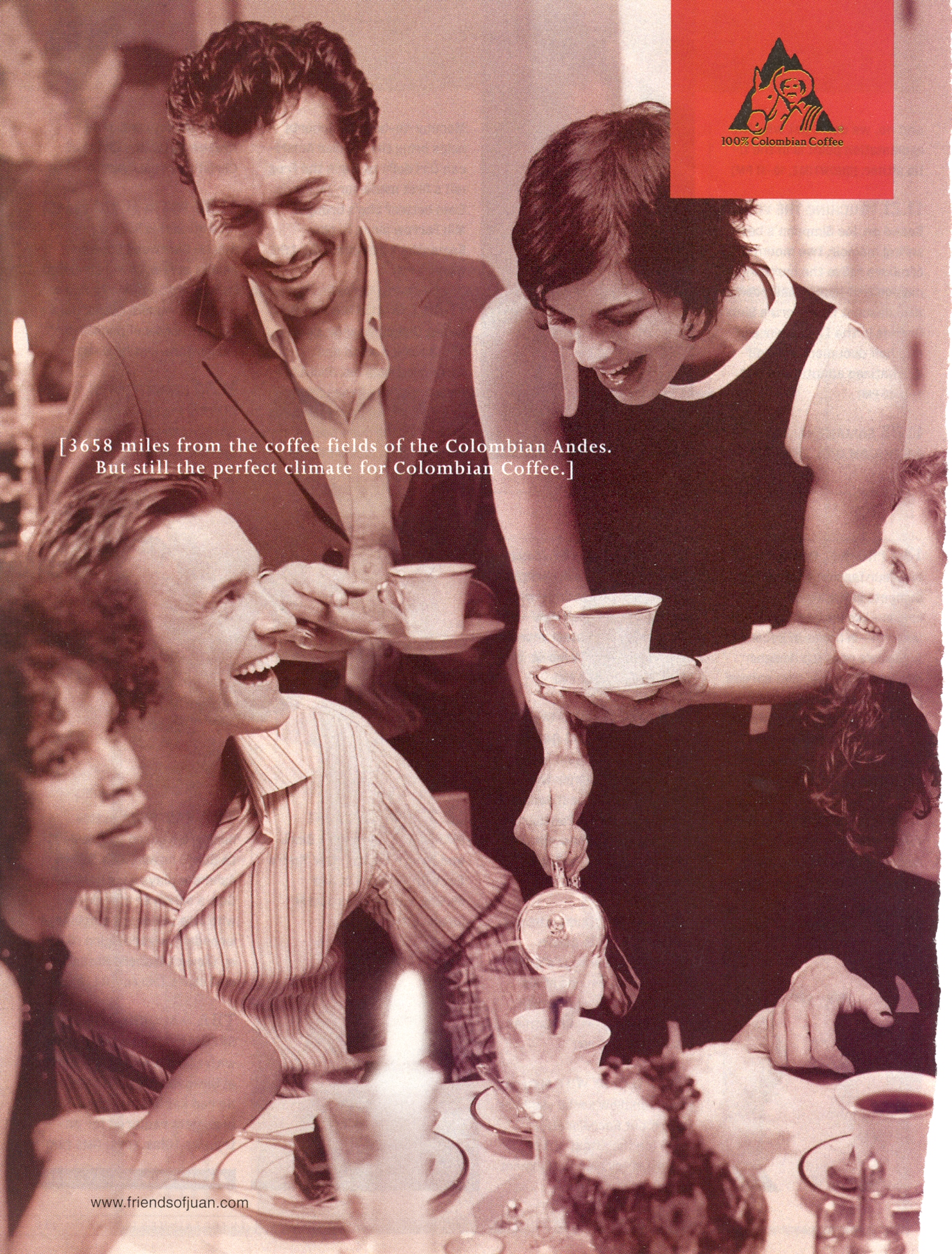 This ad for H&M is a bit different.  Instead of invoking sophistication and cosmopolitan-ness, I think it invokes who and what is “hip” and “cool” and “diversity” is used as a signifier. The text:

H&M is Europe’s leading fashion retailer [Europe again], with over 850 stores worldwide [a reference to being “global”].  Offering high-fashion [i.e., “sophisticated?”] and quality for men, women and children at great prices. 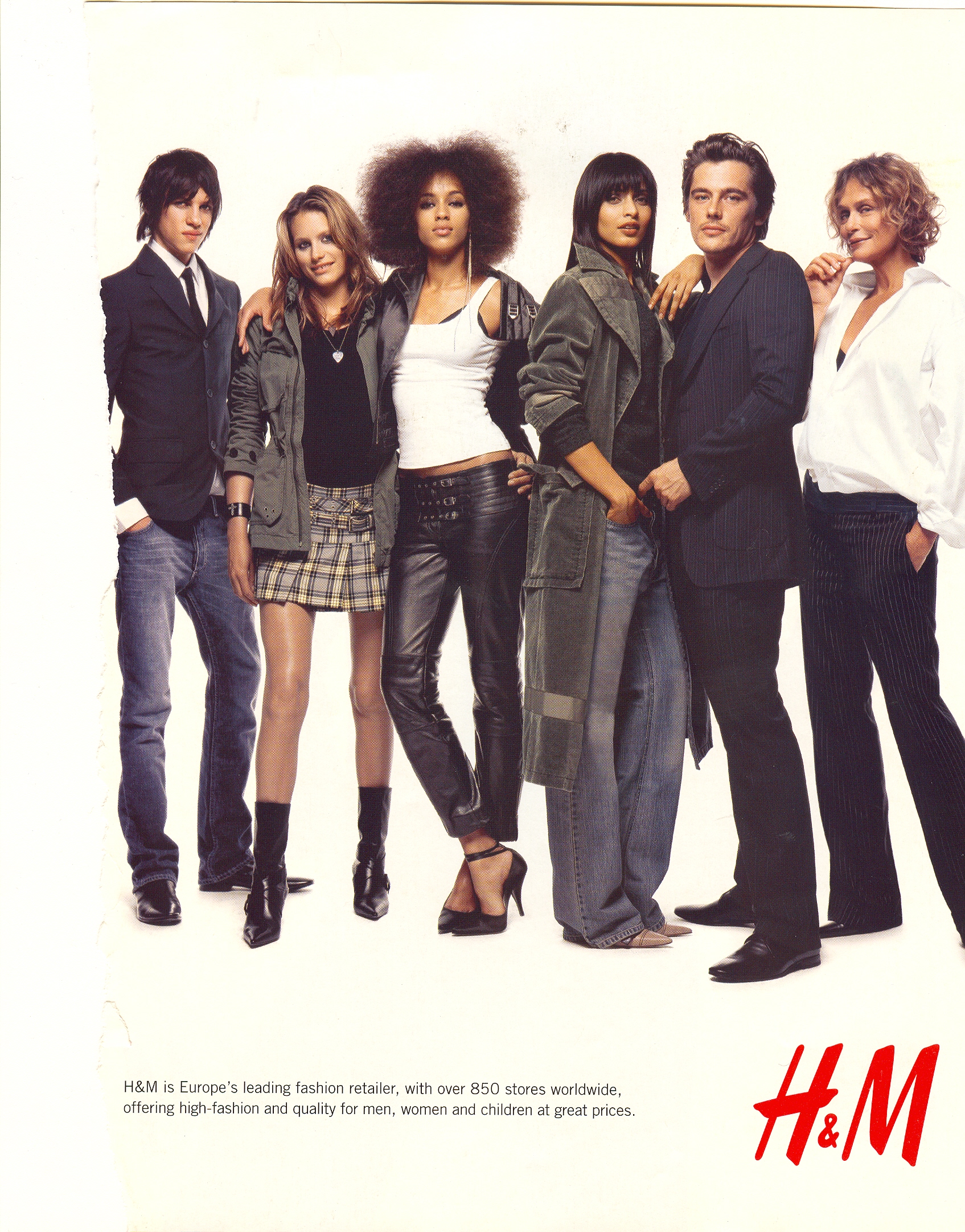 These last two ads, instead of using people of color to emphasize being “hip” or “sophisticated,” use them to signal “youth” and what being young represents.  Young people are on the forefront of “cool,” of course, and also, in some sense, define “progressive” in that they herald a more “diverse” and “tolerant” future (hello, Obama). 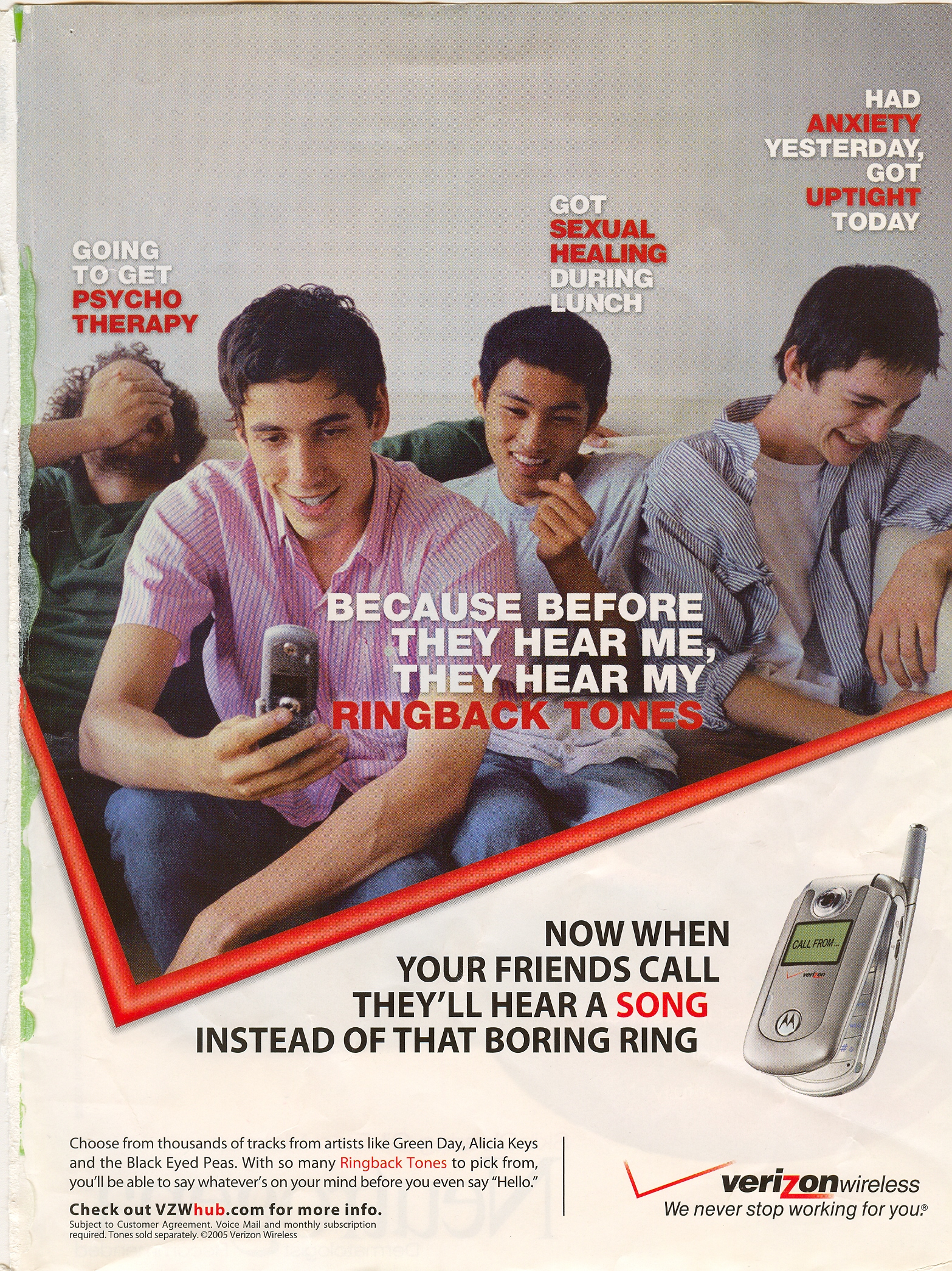 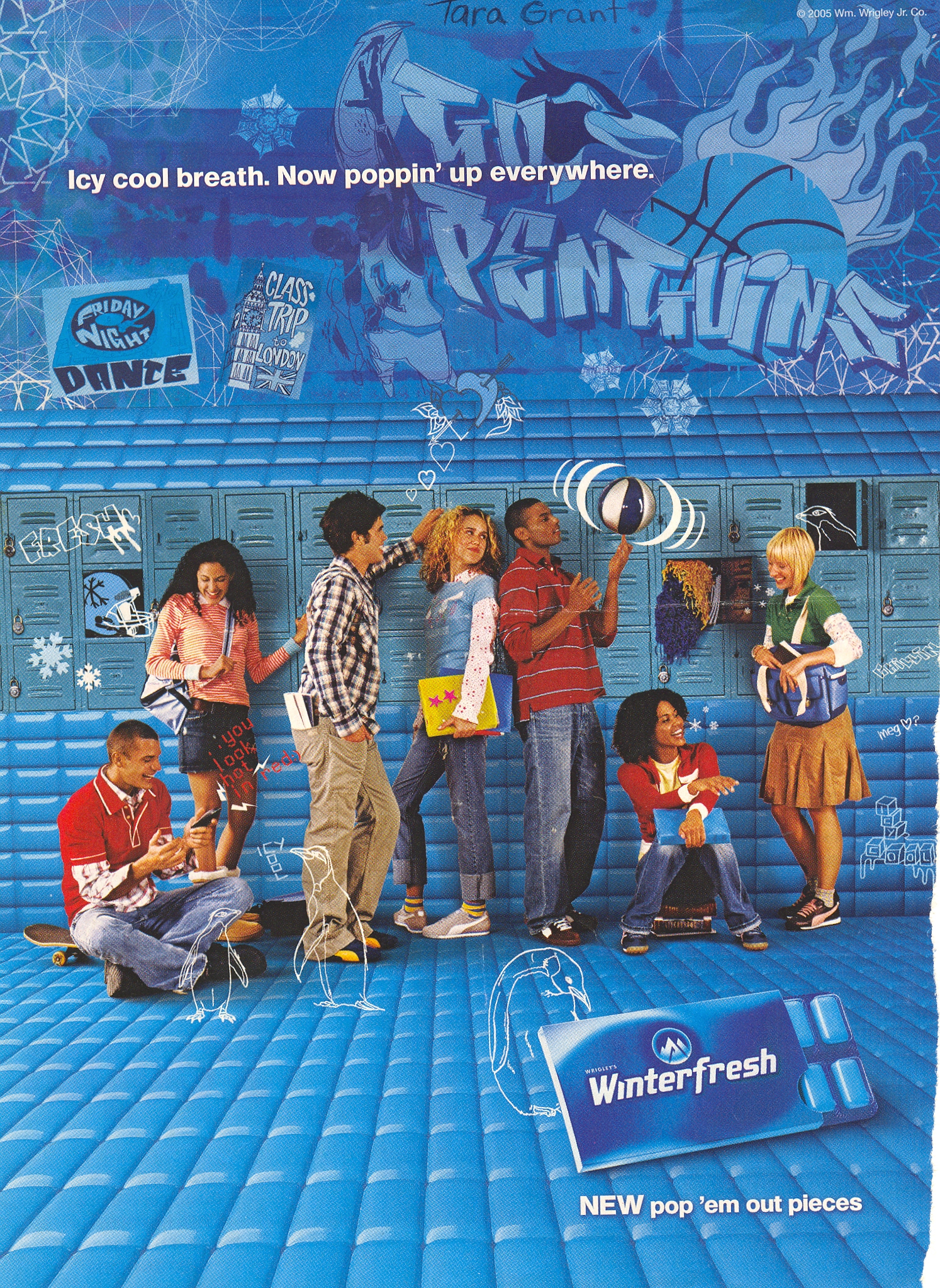 Next up: Including people of color so as to trigger the idea of human diversity.

Don’t miss the others in the series:

First ad:
Looks like the woman on bottom and on top with glasses is the same person. Neither come off as particularly non-white, all five in the ad are passing.

2nd:
Globalization enabling non-whites to travel. Young people drinking on a train. Seems plain, would be even more so if only one gender or background.

3rd: All of the people are somewhat racially ambiguous, the only partially black person is the woman on the left with curly hair.

4th: The clothes are what seem strange. The androgynous people bookending the group and the right ones advanced age are what stand out to me.

Last 2: Typical. This heterogeneity is mild compared to what I've seen and experienced. In many parts of the world (cosmopolitan places) people are less self-segregating (by race anyhow). The ads appeal to that and what to classify people by what they buy, not where their ancestors were from. As consumerism cuts people from their cultural roots it is how we look alike in fashion that bonds people together.

These ads aren't necessarily aimed solely at whites, the inclusion of non-whites is just an attempt to make the product appealing to people who aren't white.

You guys need to come over here and see the slow introduction of black people and ethnic minorities into advertising, particularly procurement and PSAs by the State. This somehow arose when there was an almost national moment of consciousness that Irish does not mean white. It also means that multinationals do not feel the need to localise their campaigns for Ireland.

I think the Verizon ad is interesting, though not quite for the reason you wanted us to focus on.
The words in red are clearly the song he has assigned to each friend (and they are changeable according to the text over the friend on the right). They have to listen to his opinion of them as they wait to speak to him.
Given how incredibly rarely Asian men are seen as sexual/desirable in pop culture, I thought it was interesting that the Asian man is the one who "got" Sexual Healing.

Readers who are interested in this kind of analysis might be interested in Color Monitors: The Black Face of Technology in America by Martin Kevorkian. Here's the description from Google Books: "Examines why black men are consistently depicted as computer savvy high tech problem-solvers in popular movies, corporate advertising, and contemporary fiction."

Sociological Images » why and how people of color are included in advertising: 2nd in a series — November 30, 2008

Sociological Images » HOW AND WHY PEOPLE OF COLOR ARE INCLUDED IN ADVERTISING: 4TH IN A SERIES — November 30, 2008

Sociological Images » HOW AND WHY PEOPLE OF COLOR ARE INCLUDED IN ADVERTISING: 6TH IN A SERIES — March 7, 2009

[...] We’ve featured a few other examples of this related to race: this set of ads that associate people of color with “progress” and related ideas, this set that associates the product with racial tolerance and harmony, and, arguably, this ad for [...]

HOW AND WHY PEOPLE OF COLOR ARE INCLUDED IN ADVERTISING: 5TH IN A SERIES » Sociological Images — August 13, 2009

HOW AND WHY PEOPLE OF COLOR ARE INCLUDED IN ADVERTISING: 8TH IN A SERIES » Sociological Images — November 27, 2009

Although there is bias towards white people in ads (because white people are the top spending consumers, not because ad makers are racist) I think there is way too much read into these ads. Really you are just looking at tea leaves or speckled paint and seeing things. I could just as easily see racism towards whites because one of the white guys in the cell ad had "anxiety" and "uptight" sent to him (white stereotypes). Let's not read volumes out of a single page. It just makes everyone look paranoid and delusional about race, one of the reasons nobody can move on from racial tensions - because certain people wont just let it go.