Public Perceptions of the State of the Economy

We have posted a number of times about the unequal effects of the current economic crisis: the worsening of the racial gap in homeownership, the more severely negative economic situation of African Americans and Latinos than of Whites, including among African American and White college graduates, higher unemployment for men than for women (this post also has a lot of info about race, sex, and job loss), the fact that older workers who lose their jobs remain unemployed longer than younger workers, that job losses have been accompanied by increased corporate profits, and that wealthier households have weathered the crisis better than less prosperous ones.

Dmitriy T.M. sent along an April 2011 Gallup poll that asked 1,013 Americans about their perceptions of the economy. Overall, results were more positive than when the same question was asked in September 2008, when the economic meltdown really became apparent. Though more than half of respondents said the U.S. is in either a recession or a depression, that’s down significantly from the 69% who said so in late 2008, while the 27% who said the economy is growing is an enormous jump compared to the mere 3% who thought it was in September 2008:

But perceptions of the economy differed significantly by income level. Nobody thought it was doing great; over half of every income group still thought the economy was in either a recession or a depression. However, those making less than $30,000 a year had a notably more negative outlook on the economy than those with higher incomes. Not only were they more likely to think the economy is doing poorly, but nearly half thought we’re experiencing a depression — twice as high as the proportion of those making $75,000/year who thought so:

Interestingly, perceptions of the economy also varied widely by political affiliation, with Democrats feeling much more positive about the economy than any other group, and Republicans and Tea Party supports feeling markedly more negative: 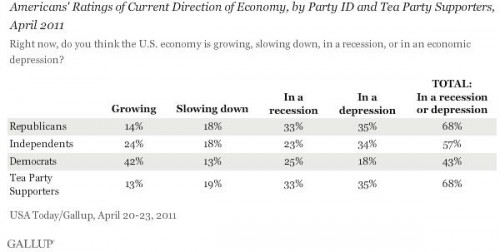 Meanwhile, the Gallup daily tracker poll on the state of the economy (which only shows overall results) shows a marked downturn in Americans’ perceptions of the economy throughout the summer of 2011, with 77% now reporting the economy is “getting worse”: 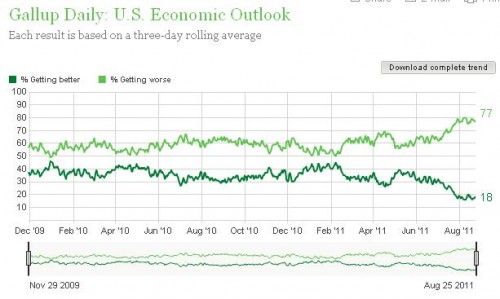 For more on the economic crisis and its uneven effects, see Philip Cohen’s post on race and job loss, differences in optimism about the future, unemployment by race/sex/education, occupation, median earnings, and race, and the geography of job loss.

[...] has an excellent post today about perceptions of the economy based on an April, 2011 Gallup poll. Some of the interesting [...]

Public Perceptions of the State of the Economy And More « Welcome to the Doctor's Office — August 30, 2011

I find it especially interesting that people on the right admit a recession/depression in high numbers.

[...] Sociological breakdown of perceptions of the economy http://thesocietypages.org/socimages/2011/08/30/public-perceptions-of-the-state-of-the-economy/ [...]