As a white woman between 25 and 44 with a college degree, I am the least likely category of person to be unemployed according to an interactive graphic detailing the joblessness rate for people according to their race, education level, age, and sex (since Jan. ’07).  It is a rather devastating look at social inequality.  I recommend visiting the site to see for yourself, but below are some screen shots with some comparisons.

For comparison, the overall joblessness rate which, as of Sept., was at 8.6 percent: 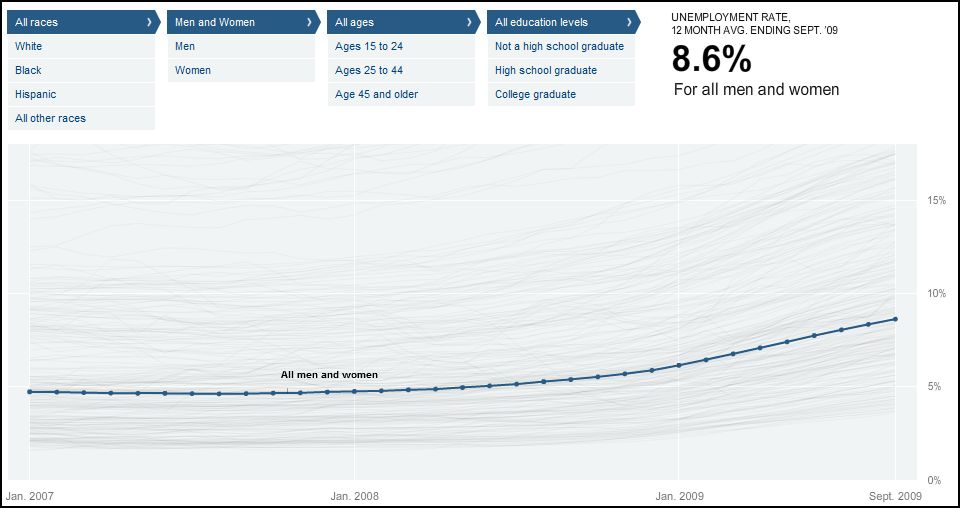 The joblessness rate for white people (notice it is lower by 1.4 percent): 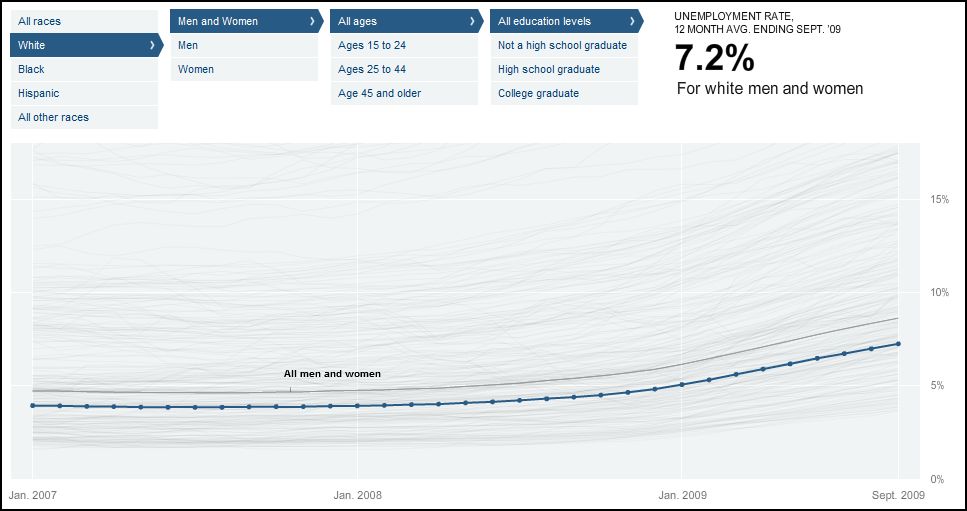 The joblessness rate for black people is almost twice that of whites: 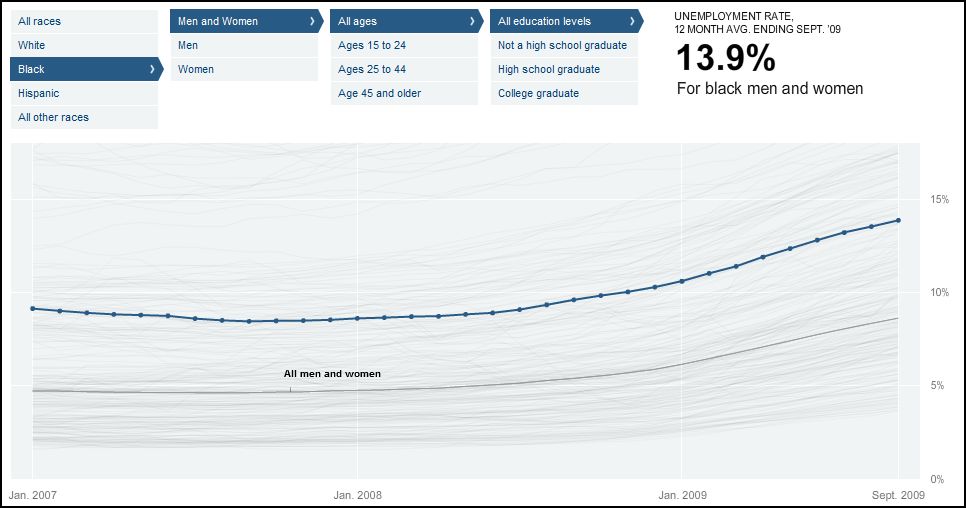 The joblessness for whites who have not yet graduated from high school is 17.5 percent: 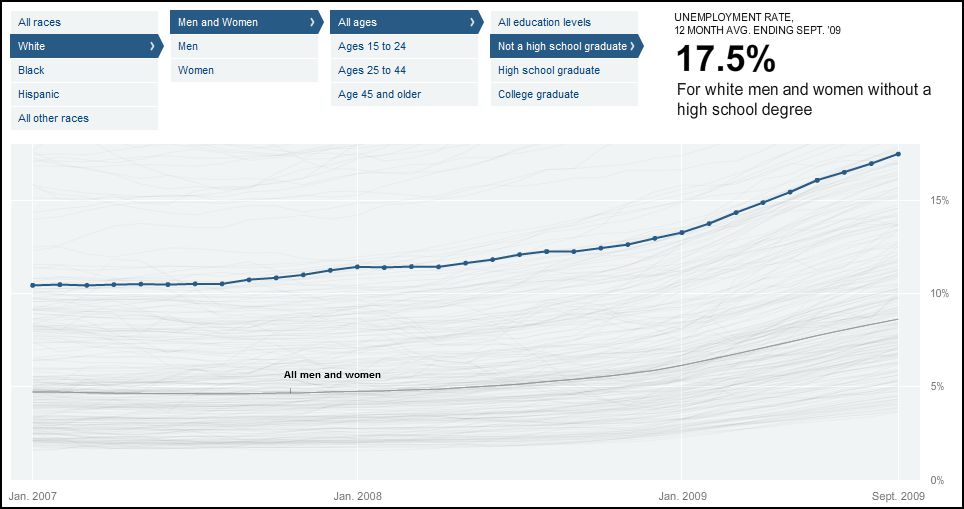 The joblessness for comparative blacks is 10 percentage points higher.  Notice that the scale on the right hand side has changed from 0-20 percent (above) to 0-50 percent: 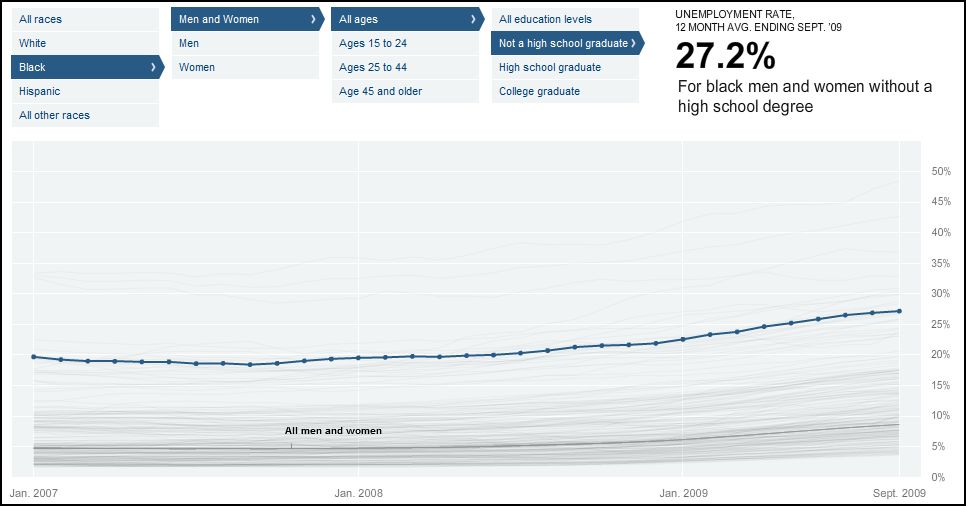 If we look at young blacks (15-24 years old) who haven’t been able to complete a high school degree, the joblessness rate is 42.7 percent: 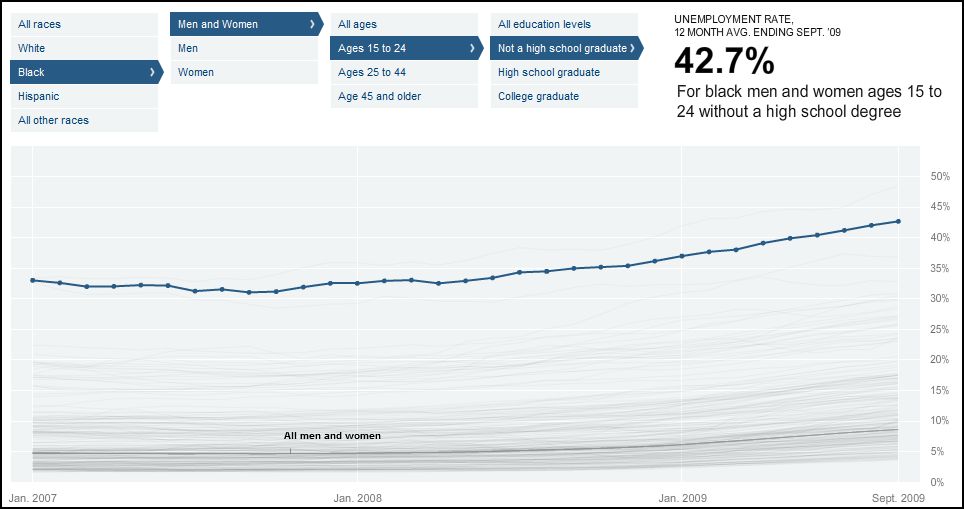 If we restrict the numbers to young black men without a diploma, we see a whopping joblessness rate of 48.5 percent. 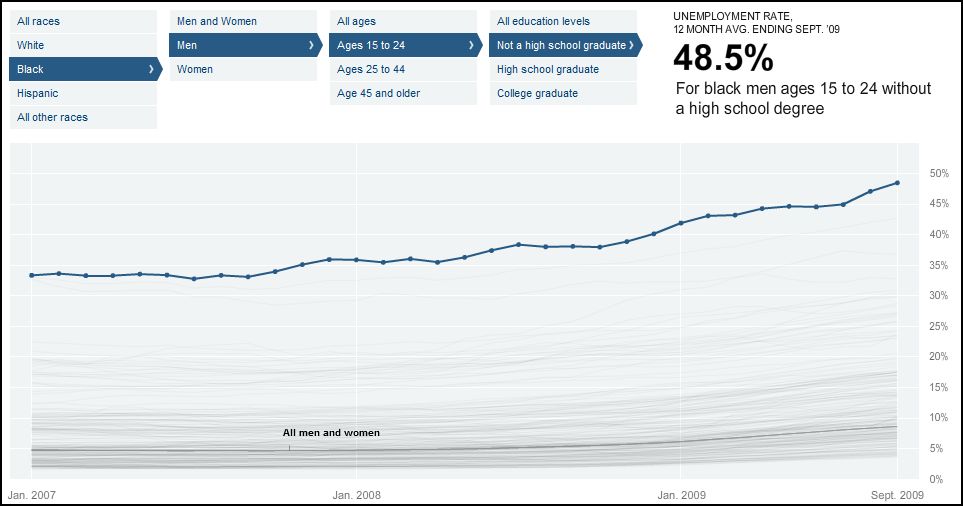 For comparison, here is the same kid, but white (the joblessness rate is cut in half, but is still huge, even by recession standards): 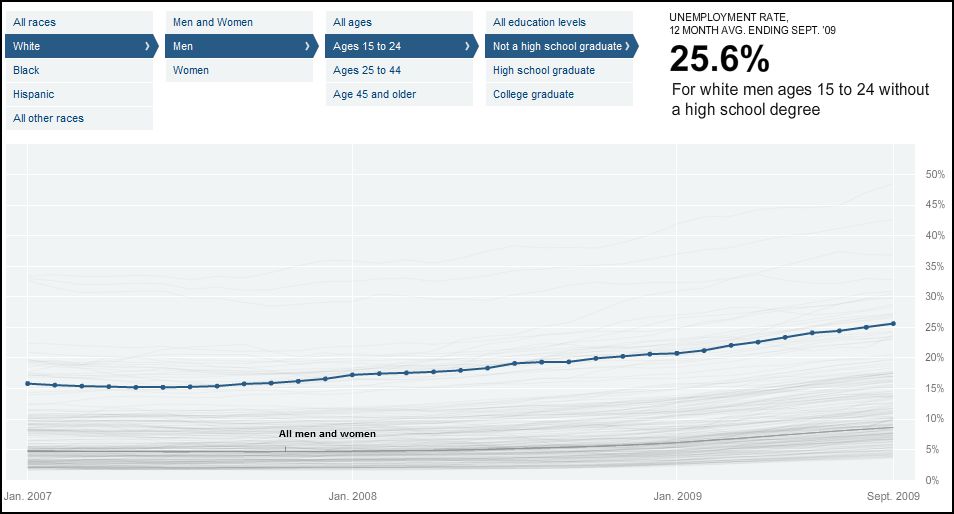 Ever wonder why young men turn to the underground economy?  Well, this is why.  Somewhere between 25 and 50 percent of them can’t get a job in the “above ground” economy.  What’s a kid to do?  Add in the rational choice of choosing work that pays more than minimum wage, and you’ve got a whole group of young people who participate in illegal activities.

Then, of course, we police black neighborhoods more aggressively than white neighborhoods, convict black people more frequently than white people, and send them to prison more often and with longer sentences (see also this post).

<sarcasm>Oh, but if they just had a good attitude and learned to talk right, they too could be successful in this life.</sarcasm>

It’s almost too much to bear.

I fall almost perfectly into that category (a white woman between 25 and 44 with a college degree) - only that I am 24. Regardless, I was just commenting yesterday to a friend that when my future children ask me about this recession, my perception will be very, very skewed. First, I live in a state that has been reasonably unaffected by the recession (as much as possible, anyway.) I left a job in September in a bit of a blaze of glory (I walked out after the senior partner in the law firm had finally taken it too far.)

I had no idea what I was going to do or where I'd work, and it seemed crazy with the economic climate, but I knew I couldn't stay for a day longer. Within 24 (!) hours I had a phone call from another firm saying that they'd heard what had happened, and would I please come work for them, even in the interim while I figured out what I wanted to do. (I hasten to add that I am not an attorney - merely a pseudo-paralegal.)

I interviewed at several companies from Sept-December, usually making it to runner up status, but not quite landing the job. Presently I am about to start at a large publishing company at a non-entry-level position for which they recruited me. (I didn't even apply.)

So - this has been my experience in the recession, and it has been - in a word - unreal. Maybe another one is non-typical. I am at least aware of that, and really, really thankful.

What about white women and black women?

First off, this topic could completly be shut down if African Americans stop being completly lazy, or if they try to make something out of themselves. As currently employed 18 year old black male, I feel it isn't that hard to get a job. I been employed by The Finish Line for a year and 2 months now, and I am currently moving up to an assistant manager by the end of this year. It is up to any person of any race to do what they have to do to provide for themselves and not depend on public aid to give them a check every week or month etc.

In response to the charts of 15-24 yr olds without jobs, these results seem to be skewed. The average person of this age (15-18) are STILL in high school and may not be able to receive a job at all. Especially for 15 year olds, who need work permits in most states, or cannot work at all because they are not 16. Also, because of the recession, older, retired people are taking jobs that are most common for people in this age group. Not only this chart, but other factors such as qualifications for a job are also considered before race. Race is not the first, or only factor in relation to receiving a job.

Across every race, age and education level the unemployment gap for men is significantly higher than that of women. Wouldn't this be an identifier of gender discrimination in favor of women?

"Somewhere between 25 and 50 percent of them can’t get a job in the 'above ground' economy."

In reference to the above statement, how was this data collected? Was it by poll/survey or unemployment registration statistics (I looked at original link but didn't find it)?

I agree overall with the post that there are genuine problems here, though stats can be misread in various ways as pointed out in prior comments. I don't minimize the challenges faced by any unemployed group--minority or otherwise. But I'm still going to challenge the word, "can't" in that sentence (I'll challenge the word "can't" in most places in human endeavor--finding it powerfully self-defeating). The word is stated with the implications of a narrative Truth, as if these individuals are trying and failing to get work, which may in fact be the case and is definitely an issue.

However, the data and adjunctive commentary doesn't provide DIRECT support for that narrative, so I am just noting that there is a possibility--as commentator Greg controversially suggested (himself a member of this demographic)--that the above quoted sentence is creating a narrative that may not be entirely accurate. Being unemployed does not necessarily imply that one CANNOT find work. There is an assumption being made (i.e., that all unemployed people want to work and would be working if they could be but cannot find work).

Again, I am not suggesting there are not problems or injustices in the scenarios illustrated by this study. Nor am I saying it is always possible to find work for any group with a will (though I put a lot more faith in the power of strong-willed humans than many might and wish more did the same). I just think data is most powerful when we think very critically about what it means and avoid assumptions that are conveniently in service of other agendas. So all I am saying is that it is possible these individuals were queried about their failed employment efforts and that information was just withheld (there is not methodology shown). But it is also possible to gather such data in ways that doesn't ask such questions, leaving the door open for unfounded assumptions.

Based on frustrating experience, it is likely my comment will be misconstrued as an attack on a struggling demographic, which it is not in any way, but I'll risk that in the hope of championing more clarity in the discourse.

This is a really good post. The sarcastic aside at the end is problematic, though:

"Oh, but if they just had a good attitude and learned to talk right, they too could be successful in this life."

We don't know how much of the difficulty that black people have in getting jobs comes from linguistic discrimination as opposed to skin color discrimination. There's nothing about language in the data here. I wouldn't be surprised if it's a large factor, though, and that blacks who have learned to "talk white" do much better in the job market.

No Words: The Effect of the Recession Varies by Race, Gender, and Class « Defying History: Christian and Womanist Perspectives — February 5, 2010

Wait, so unemployed white women ages 15-14, 25-44, w/ college degrees have lower joblessness rates than their Black counterparts, as well as lower rates than Black/White men who share the same qualities...

This is a rather non-proactive commentary on the whole scene, isn't it?

This is blantant racism, it does nothing but perpetuate the "problem", if there is even one.

Face it... people who are deemed as less educated, ugly, shorter, stupider, or what have you fall to the way side. Welcome to capitalism. Thirst is nothing, image is everything.

It's ridiculous to imply that social class and race are unrelated.

where is the data on transgender people???

[...] on unemployment. These issues of course also get us back to other missing factors in BLS data which can and does break things down by both race and gender but whose most cited stats do [...]

Wake up people it's the president stupid, he is setting policy that hurts minoritys first and no issue is raised. Health care job killer. Tax policy job killer. No real science here. When high wage manufacturing goes to China. Mid wage manufacturing jobs go away. No healthcare for workers in China and 1.20 per hour wages. This is what happens when you have lawyers in charge of the nations political class.

black males are used to being hard and disrespectful thats why its harder for them to get a job. they dont ant to listen to the boss and cant handle taking orders from the boss that probably has less respect for blacks just like other monitories.