Sangyoub Park, an Assistant Professor at Washburn University, sent in a link to a story by NPR about the racial gap in homeownership rates, a gap that has worsened during the recession. For instance, while over 70% of White households owned their home in 2010, less than half of African American households did: 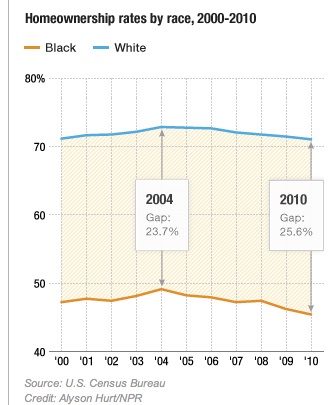 This graph from the Census Bureau also shows the rate for Hispanics and “all other races” — the only group whose homeownership rate is still significantly higher than it was in the early ’90s. Hispanics are only slightly more likely to own their home than are African American households: 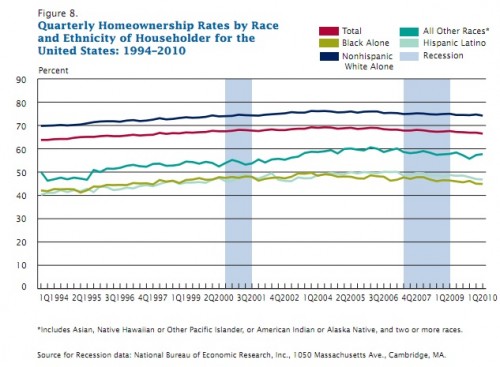 NPR also has a page with interactive maps that show foreclosure rates, unemployment, and median income (though unfortunately it doesn’t break information down by race/ethnicity). You can roll over a county and get the specific data. Here’s the foreclosure information for Clark County, Nevada, home to Las Vegas, me, and, as far as I can tell, the highest proportion of homes in foreclosure in the nation — 1 in 99: 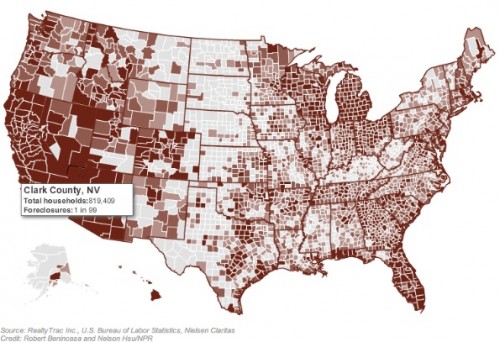 Also see our related posts on African American and White job loss during the recession, the growing racial wealth gap, and more on racial differences in the severity of the economic crisis.

Single men, or couples (with men)? Women of all races know what I mean...

A tad meaningless... Germany has the lowest homeownership rate in Europe (and much lower than the US). Still it has weathered the economic crisis the best.  Homeownership can be quite a burden...

[...] employed in management and professional occupations. Other trends also indicate that, while over 70% of White households owned their home in 2010, less than half of African American households did. ← What is racism? What is prejudice? Arn’t they the same [...]

Housing markets could benefit from Latinos who want to buy their first homes | Legally Sociable — April 15, 2013

[...] The housing market could benefit from such a reservoir of buyers. For example, those baby boomers who want to unload their homes in the near future may just want to access possible Latino buyers. Plus, the one cited figure above seems to suggest that some of the uptick in housing in the country can be attributed to Latinos. But, assuming different groups in the United States want to or perhaps more importantly can, given the wealth differences in the United States, purchase homes is not a given. There are still big gaps in homeownership rates by race and ethnicity. [...]