Does the U.S. Response to Lead Poisoning Suggest We Care Less About Poor Kids

The presence of lead paint on toys made in China this year brought the threat of lead poisoning to the forefront of the American mind. Parents, pundits, and politicians called on the U.S. government to DO SOMETHING. But lead poisoning was a problem for low-income families long before the China toy scandal and there was little to no outcry in the popular press.

Lead poisoning in children can increase the risk of cognitive delay, hyperactivity, and antisocial behavior. Many older homes and apartments available for rental in low-income neighborhoods still have lead paint and ingesting paint dust and paint chips is the most common way to get lead poisoning. Blood tests show that children living in poverty show much higher exposure to lead than other children.

According to William Ryan, if you are a landlord, renting out a residence with lead paint without making tenants aware of it is a crime. But, instead of enforcing compliance among landlords, the most common response to the threat of lead poisoning has been to warn mothers. Here is a representative poster: 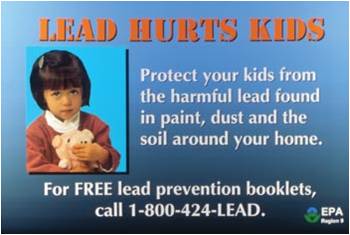 Ryan writes that, while lead poisoning is often described as a problem involving negligent or ignorant mothers, it:

…is more accurately analyzed as the result of a systematic program of lawbreaking by one interest group in the community [landlords], with the toleration and encouragement of the public authority charged with enforcing that law.

So as long as the threat of lead poisoning was more-or-less restricted to the poor in the U.S., it was considered the problem of individuals (mothers) and the state refrained from doing much more than promoting individual responsibility. But, as soon as the lead poisoning threat affected middle class children through the toys from China, state intervention seemed appropriate.

To ignore these continued and repeated law violations [by landlords who rent residences with lead paint], to ignore the fact that the supposed law enforcer actually cooperates in lawbreaking [by ignoring landlord infractions], and then to load a burden of guilt on the mother of a dead or dangerously ill child is an egregious distortion of reality. And to do so under the guise of public-spirited and humanitarian service to the community is intolerable.

CITATION: Ryan, William. 1998. Blaming the Victim. In Race, Class, and Gender in the United States. See also his book.

For a comparison with France, you can read several articles by Didier Fassin, who show how "saturnisme" became a public health matter when some physicians showed it was not a "cultural/migrants" problem but a housing/poverty one (apologies for the language ;=) )
Here's one of those articles :
http://bmb.oxfordjournals.org/cgi/content/full/69/1/167#SEC3

I'm in Massachusetts and there is a very big emphasis on lead paint in housing and landlords are often forced to do expensive rehabs to help prevent it. I'm completely unclear as to you comment that nobody pays attention to it, its been a big deal in the Northeast for decades...

In my experience renting a variety of apartments in New York and Wisconsin, I've always been given information about the possibility of lead paint in the building (since most buildings built before the mid-70s have lead paint somewhere) and have had to sign something saying I was informed. The landlord usually also gives out a brochure about how to reduce the risk of lead poisoning - I think they must be required to do so. I wouldn't be surprised if slumlords did not follow the law though.

I'm not sure removing lead paint is a viable solution. I've learned (in looking to buy a house) that it is extremely difficult and expensive to remove lead paint (and also dangerous, because sanding it off makes it into dust that can be inhaled). But as long as the lead paint is painted over with other layers of non-lead paint, and it is not chipping or peeling off, it is not really dangerous. Same with asbestos, actually. As long as it isn't crumbling and exposed, it isn't harmful. It seems to me that the pressure should be on landlords to keep their properties in good condition (no peeling paint), not necessarily to remove all lead paint. And individual tenants have a role in constantly inspecting to make sure that lead paint is not becoming exposed. So campaigns aimed at parents/tenants are probably a good idea. Not that it is entirely the responsibility of tenants - but they should be aware of the issue so that they can recognize when a landlord is negligent. I can't imagine how else landlord compliance could be enforced.

[...] also a previous post in which I argue that lead poisoning remained a mother’s problem until the China toy scandal [...]