Deepa D. sent in an interesting post from Racebending about the race/ethnicity and gender of stars who get top billing in Paramount movies. Three volunteers at Racebending analyzed relevant data on movies produced or distributed by Paramount Pictures since 2000, as well as those currently in development. They focused on top billing — that is, which stars are most frequently highlighted in promotional materials, whose names appear highest in the credits, and so on. This both reflects power and status in Hollywood (the more prestige you have, the higher you’re likely to be credited compared to lower-status stars with similar screen time) and contributes to it (higher billing leads to more exposure and attention. Racebending explains:

Various types of Credit include Main Title Credit (before the movie starts), End Title Credit (after the movie is over), Paid Advertising Credit (mention during commercials and publicity), Above-the-Title Credit (name shows up on top of the movie name in promos and on screen), and Billing Block Credit (the block of text on posters and trailers.)

For our review, we simply looked at which actor is listed first on imdb.com. Even if several actors have received top billing or above the title billing, someone is always listed first…

Our review of actors in top billing was necessarily subjective, but the cultural ethnicity and gender of most of Paramount’s top-billed actors like John Travolta, Angelina Jolie, and Samuel L. Jackson are well established in the public sphere. For animated characters like Shrek the Ogre, Spongebob Squarepants, and Eliza Thornberry we looked to the gender and ethnicity of the voice actor. We simply tallied the first actor billed, (for example: Malin Ackerman in Watchmen, Chris Pine in Star Trek, Ben Affleck in The Sum of All Fears, Jamie Foxx in The Soloist, Noah Ringer in The Last Airbender.)

The analysis found that the vast majority of top-billed stars in Paramount films from 2000 to 2009 are male, while movie audiences are about 45% male: 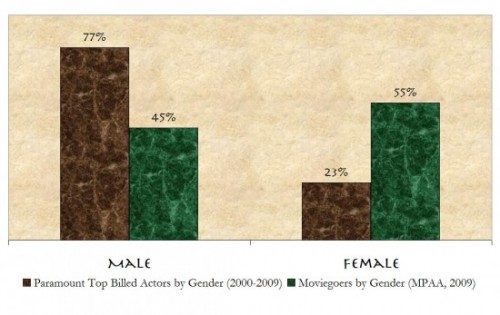 An even higher proportion — 86% — of top-billed stars are White (the green bars show each groups percent of the overall U.S. population): 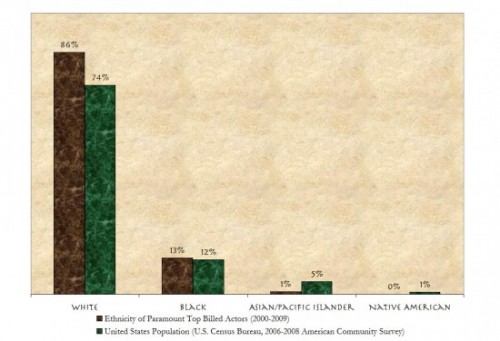 The category White there specifically includes White non-Hispanics. No Latinos had top billing in Paramount movies during this time period. Also,

When the data are broken down by race/ethnicity and gender, we see that the vast majority of top-billed stars who are non-White are men. Non-White women are almost entirely shut out: 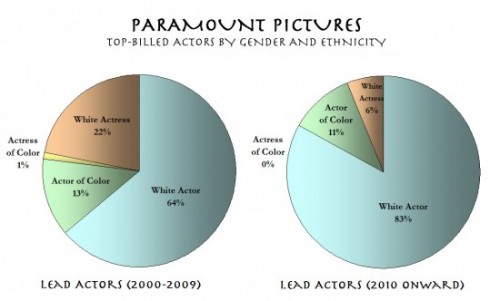 The chart on the right represents films currently under development. While Whites predominate in the starring roles in these projects, notice that White women make up only 6% of top-billed stars, and non-White men make up about twice that proportion.

This is, of course, just one studio. If you have links to similar data on other studios, or on movies more generally, send them in!

Malin Ackerman in WATCHMEN is probably not even a valid data point, because if you look at the billing on imdb.com, it appears that the top six characters -- the ensemble that is the "contemporary" generation of superheroes -- are billed in alphabetical order. So, coincidentally, they get an extra point for diversity, Ackerman being the only woman of those 6.

I'm sure I read somewhere a year or two ago that that one of the major studios was not going to make any/many films with women leads as they were consistently bombing (read after another Nicole Kidman film tanked). Maybe if they just created some decent roles, other than love interest, psycho or hero-freak???

And I'm sure I'm not the only one who watches and movie and thinks, I think I've seen two women for three minutes in this entire 90 min film [sigh]

No Latinos had top billing in Paramount movies during this time period.

It may not be as bad as it once was, but there are still a lot of "hidden" Latinos in Hollywood (e.g., Charlie Sheen, born Carlos Estevez to Martin Sheen, aka Emilio Estevez, Sr.; Cameron Diaz; historically, there was Anthony Quinn, born Antonio Rodolfo Quinn Oaxaca).

In other words, while I'm so far unable to find a complete list, I wouldn't be willing to bet that there were no top-billed Latino/as during the time period.

I suspect there's an article or even a book to be written about the whitewashing of Latino actors in Hollywood.

I think their point is probably valid, but their methodology seems remarkably suspect. "First listed in the IMDb" is typically equivalent to "first listed in the end credits", and end credits can be done by prominence (which is what they want to find), by appearance, or alphabetically. "By appearance" isn't at all uncommon; so if you use their methodology, you'll find that the star of Harry Potter and the Goblet of Fire is Eric Sykes, in the role of "Voldemort's gardener who dies in the first five minutes". (I had to look that up.) Daniel Radcliffe is fourth-billed.

Also, taking only the first-named person doesn't necessarily seem the best way to go. Looking at the movie Cop Out (which you probably shouldn't; but it was the first recent black guy/white guy buddy movie that came to mind), using the "first-named person" method will tell you that this movie stars Bruce Willis. On the other hand, if you look at the first five names, you have, in order: white man, black man, Hispanic man, Hispanic man, Hispanic woman. There's absolutely significance to the fact that the white man is billed first--if I had to guess, mind you, I'd say that it's not because he's white but because he's a bigger star than Tracy Morgan; though of course he's probably a bigger star because he's white, though that takes you into historical facts as well as facts about contemporary movie promotion.... Additionally, I don't particularly remember seeing the three Hispanic actors in the commercials for the movie (or, really, anyone other than Willis and Morgan).

All of which is to say that, while I don't know that the results would be wildly different with a better method, taking the first name off the credits isn't really the best way to find the race-and-gender balance of who's considered the biggest stars.

I think this post is an interesting example on the intersection of race and gender oppression.

There's a lot of Catch 22s at play here... and it's actually an industry that operates with pretty tight margins -- we only hear about the blockbuster successes, but there are A LOT more failures -- so it's a risk averse industry. Who's allowed to take risks? Those who are established money-makers. Who are they? Well, they're men because very few women have been (or are) in the pipeline.

We all know movie writers (at least the ones that get movies made) are predominantly male. So, obviously there would be biases there. Then, of course, there's the 90% of the viewing public (male and female) that have deep-seated expectations and are comfortable with a relatively small set of constructions and devices, and so on. This means there is a huge danger of (commercial) failure if your tilt the scales too much. Also, there's a risk of seeming "preachy" if heavy-handed, which tends to turn off most people.

Then there's the other side -- as evidenced by the Toy Story thread -- if a movie doesn't somehow represent the absolute ideal, it will be ripped apart anyway. Progress or reflecting a shift in perceptions isn't enough -- all the boxes have to be ticked (even if this doesn't jibe with reality OR the consumer).

I'm wondering if it's worth taking a moment for perspective? Compare movies today (on the whole) with the movies of the 1950s or 60s. Has nothing changed? Would you say its keeping pace with society? Are they making less progress than society at-large? (not in terms of reflecting demographics, but rather in terms of perceptions and prejudices, etc.)

These are questions -- not conclusions.

The actual U.S. population's racial spread doesn't seem to far from the racial spread of top actors and actresses in terms of race, so I am not surprised by the graph.

Also, the films that attract women are usually chick flicks with many leading men. Could this add to the amount of men in movies being high, while the amount of women watching movies also remains high?

OK - this has nothing to do with race or gender, but am I alone in thinking that marbled parchment in the bar graphs is really icky to look at? The folks are Racebending do some interesting research, but... ick. :-p

For an analysis not of the numbers but of the types of roles that people of color and white people play in movies check out The Minority Reporter. http://www.minorityreporter.com/The_Minority_Reporter/Analysis.html

[...] Gender, Race, and Top Billing at Paramount Pictures | Sociological Images "An even higher proportion — 86% — of top-billed stars are White. [...]

I'd just like to point out the inherent weirdness in the word "actress." We don't have doctors and doctresses...

I wonder what the husband of a female president--presuming she had one--would be called? First Gentleman would be logical, but I'm betting it would be First Husband.

[...] should see this… it’s a breakdown of gender, race, and top billing at paramount pictures, which you all know is one of (if not the) largest production companies in the U.S. (if not the) [...]

These stats support my personal observation over the years. Namely, that no matter how famous & well-accomplished the "Black" person, they ALMOST ALWAYS take 2nd billing to the "White" person. Even in cases where the White person is LESS famous or accomplished. This includes everything from officially listed credits to press publicity. For example, Kanye West is always mentioned AFTER Kim Kardashian, although she's not know for having any discernable talent. Or, In the New animated movie "Home," voice lead & international star, Rihanna is mentioned AFTER her co-star, the less famous, Jim Parsons. These are just 2 current examples that pop to mind. But the list is extensive & pervasive. I can only explain this alarming discrepancy in billing as either conscious or unconscious racism & sexism. In either case, it's still bigotry on blatant display.

Thhis piece of writing will hellp the internet viewers for creating nnew web site or even a weblog from start
to end.
Repairs in Khrushchev rbt-ua.com ремонты в хрущевках