Vesko J. sent in several images from “Bee Movie,” the cartoon with Jerry Seinfeld as the voice of the main bee character, Barry. He says:

Even the bees, that pollinate the flowers, are male. They are called “pollenjocks” and all the female bees fall for these strong, muscular, brave guys.

These are the pollenjocks. In case you didn’t know, it’s actually female bees who collect pollen. 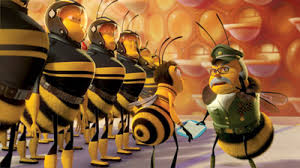 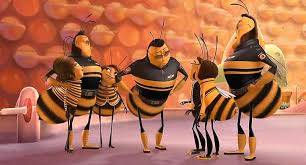 The pollenjocks are big, muscular male figures who tower over the females, who, as far as I can tell, could be called pollengroupies. They aren’t really individuals with personalities; they exist as background to show how awesome the pollenjocks are. On the other hand, the female characters that are treated as individuals tend to be in the home, such as Barry’s mom. Barry’s love interest is not a female bee but a human female, a florist.

Now, I get it. It’s a kids’ movie, and there’s going to be a lot of anthropomorphizing and such. But how animals are anthropomorphized tells us a lot about our social assumptions and what we’re comfortable with. There’s no reason the worker bees’ sex has to be changed, except that it makes more “sense” to us that the hard-working providers would be male. The choices to make the males the center of the story, to make them bigger than the females, and to portray female bees as fawning groupies desperate for male attention tells us an awful lot about the gender stories we tell ourselves about humans, and that they’re important enough to us that even children’s movies have to recreate those stories, no matter how much fiddling with reality it takes. And even though this is an animated children’s movie about bees that talk, flirt, and wear clothes, I bet an awful lot of people will think the gender hierarchy in the movie is fairly accurate.

I'm just flagging this but you should also check out Happy Feet for some astonishing sexualisation and gender stereotyping.

To me its just sad howthe ppl that did this movie could'nt find a way to do it in a educational way. I mean, instead of getting and forgetting about every freakin movie you saw as a kid, you could get there and with a little knowledge.

" instead of getting to highschool and forgetting about every freakin movie you saw as a kid, you could get there and with some knowledge."

Another strange one: Barnyard.
There are "male" cows (with udders) and many other bizarre things...

I was surprised to learn that the female Bee workers actually collect the pollen.

I was surprised in the same way to find out that the female lions actually do the hunting...

I think the main problem is the way that the movie is set up is completely incompatible with the actual biological realities unless the lead was a female.

Females do all the work within the colony, males are simply there to provide reproductive services to the Queen.

[...] roles (for another example of changing the behavior of animals to fit human gender norms, see this post on “Bee [...]

[...] it had an Asian lead character as well as our post on gender in Pixar films, gender roles in “Bee Movie,” 31 Comments Tags: gender, race/ethnicity, race/ethnicity: [...]

What a pile of crap. It's just a cartoon!