A Cracked article compiled their candidates for the Nine Most Racist Disney Characters. Select stolen clips and liberal quoting below:

Why do Native Americans ask you “how?” According to the song, it’s because the Native American always thirsts for knowledge. OK, that’s not so bad, we guess. What gives the Native Americans their distinctive coloring? The song says a long time ago, a Native American blushed red when he kissed a girl, and, as science dictates, it’s been part of their race’s genetic make up since. You see, there had to be some kind of event to change their skin from the normal, human color of “white.”

The bad guys in Alladin:

“Where they cut off your ear if they don’t like your face” is the offending line, which was changed on the DVD to the much less provocative “Where it’s flat and immense and the heat is intense.”

In a city full of Arabic men and women, where the hell does a midwestern-accented, white piece of cornbread like Aladdin come from? Here he is next to the more, um, ethnic looking villain, Jafar. 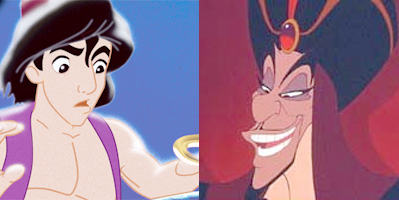 NEW: Miguel (of El Forastero) sent in a post from El Blog Ausente that compares an image of Goofy, a character generally portrayed as sort of dumb and lazy, to a traditional Sambo-type image: 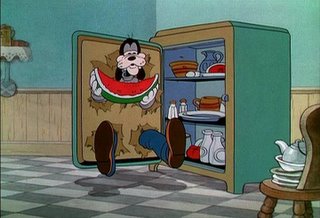 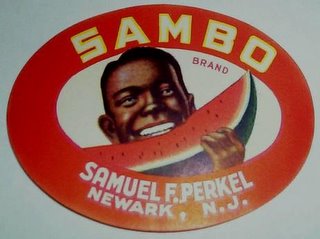 The post suggests that Goofy is a racial archetype, built on stereotypical African American caricatures. I can’t remember ever seeing anything that suggested this, but that doesn’t mean much, and I certainly don’t put it past Disney to do so. Does anyone know of any other examples of Goofy supposedly being based on African American stereotypes? On the other hand, is it possible to depict a character eating watermelon in an exuberant manner without drawing on those racist images? When I look at the image of Goofy above, I have to say…that’s pretty much what it looks like when my (mostly White) family cuts a watermelon open out on the picnic table in the summer and everybody gets a piece and they all have ridiculous looks on their faces as they dribble juice all down themselves eating big chunks (I say “they” because I’m a weirdo who doesn’t really care for watermelon, so I rarely eat any, and even then only if I can put salt on it). I’m fairly certain that I couldn’t put up a photo of my family eating watermelon like that without it seeming, to many people, to draw on the Sambo-type imagery. It brings up some interesting thoughts about cultural and historical contexts, and how and in what circumstances you can (or can’t) escape them, regardless of your intent.

Why isn't Claude Frollo included? Or aren't the French a protected class?

Also, the pic of Aladdin above is not a fair representation of his skin tone. In the movie, he is more brown as in this pic: http://asg.homelinux.org/albums/aladdin/Aladdin_nice.jpg

I always felt a little uncomfortable with the "we are Siameese if you please" song in Lady and the Tramp. Mostly because it seems sort of racially insensitive, but also because I'm more of a "cat" person and I hate how Disney films always seemed to come down more on the side of Dogs. I mean seriously can you think of one great disney cat hero? Can you even remember the names of the Aristocats? Didn't think so.

What about Oliver & Company?

What about the part in Peter Pan when Wendy is told "Squaw to dance-squaw gettum firewood!" Not about race, but still pretty horrific. (No mention of why Tiger Lily is allowed to dance.)

Damn, the people who commented on the original article are terrifyingly ignorant. There sure are a lot of Disney apologists out there who think that, because they like Disney, it should never be criticized for anything.

Are we not counting lions as cats, then?

Jafar in Aladdin is--like most Disney villains--also coded as gay / effeminate. Goin' for the home run there, Disney...

[...] post about racist Disney characters was updated with a comparison of an image of Goofy to a traditional “Sambo” caricature [...]

I can think of a few more, alas. Aside from Siamese If You Please (and I love the song, actually, but that doesn't stop me from seeing that it's drawing on a racial stereotype), there's the extended dance party scene from The Jungle Book, with the apes and Baloo adopting popular contemporary black dance styles and music. It's both brilliant and painful. They don't just use racial stereotypes; they use them *effectively.* As a product of white American culture, it's hard not to just eat that stuff up, and then when somebody calls you on it, you feel defensive for liking it... vicious circle.

Much as I wish their racism were limited to old stuff like Song of the South and the black centaur who waits on the white centaurs (now cut from any version of Fantasia you could find, but it's on YouTube), all to recently, there was a toothless firefly spouting broken Creole in the Princess & the Frog teaser trailer. Nice Louisiana hick stereotype there. OUCH.

"Can you even remember the names of the Aristocats?"

Duchess (the mom), Marie (the girl), Toulouse (orange), and Berlioz (black), I think. Not sure about the French name spellings.

Oliver & Co. was a good cat movie, but the cat protagonist was outnumbered by many dogs. (Personally I like both.)

[...] And for even more Disney fun, review the 9 Most Racist Disney Characters (h/t Sociological Images). [...]

[...] people have eagerly awaited “The Princess and the Frog,” Disney’s long history of negative or stereotypical portrayals of non-White characters (i.e., “Fantasia“) meant many were concerned about what the [...]

For the love of Mickey, how can you even have an article like this and not mention the crows in Dumbo? Painful stereotypes, every last one of 'em, and just in case that went over your head, the leader's name is Jim.

You are asking about Goofy. Yes, he was originally conceived and designed around the racial stereotypes. Early ( 1930's) story documents from Disney Archive, (written by Art Babbit) even refer to him a "n... Boy" This was a product of the times, and condemned by the company today, but as a part of the history of animation, Goofy was based on racial stereotyping of that era.

As an Arab I'm HIGHLY uncomfortable with that particular analysis of Aladdin and Jafar. Do white people even have a clue what Arabs look like? Yes, Aladdin has a wholesome white-boy accent, but the way he is drawn is actually pretty representative of what a young Iraqi male would look like. Type "Iraqi boy" into google image search -- you'll see some handsome olive-skinned kids with wide-set eyes and thick brows. Not all Arabs are hooked-nosed, hooded-eyed devils with pointy goatees, as cracked.com seems to think we are; Jafar isn't "ethnic-looking," he's a racist portrayal.

If you look at any of the old Disney comics -- even in the 60s -- Goofy's talking bubbles are always filled with racially coded language ("gawrsh, how dya think dey do dat?")

The picture of Aladdin given in the OP is of him in a sea of light, which makes him appear lighter than Jafar. In the rest of the movie they have a very similar skin tone.

Also, I don't think Aladdin looks like a white kid. Maybe I am mistaken, but if I ran into him on the street, I wouldn't assume he had a European background.

You put SALT on your watermelon???

[...] direct, verbal prejudice was lower in TV and movies before and during the civil rights movement, racism itself was very prevalent and it hasn’t gone away yet. It is just lessening  over time as society lazily gets its act [...]

[...] Disney’s overtly racist characterization of blacks in their animated features, the racial implication of pairing their only black (and Southern) princess with a [...]

[...] Racist Disney Characters » Sociological ImagesOh, where should I begin? Since everyone noticed the CROWS in Dumbo, let’s start THERE. Sure, EVERYONE remembers the crows. Why does no … [...]

[...] Here is another picture of him with a different skin tone at the beginning of the movie. Subliminally exploiting becoming “white” as part of the positive character change of the story. More information is here http://thesocietypages.org/socimages/2009/01/06/racist-disney-characters/ [...]

I just saw a picture on my yahoo email account, an advertisement for Disney Cruise Ships that shows Goofy dressed up as a waiter for Donald. Another black stereotype. And Donald has long been the irritable single white guy.

[…] direct, verbal prejudice was lower in TV and movies before and during the civil rights movement, racism itself was very prevalent and it hasn’t gone away yet. It is just lessening  over time as society lazily gets its act […]

The Aladdin one is just straight-up trying too hard. Have you ever been to any Arab country? Because Aladdin looks every bit as Arab as Jaffar. Maybe it's just because Aladdin is young and handsome, and the person who wrote this thinks all Arabs are decrepit old creeps?

As for the selective use of accents, that's standard with Disney. The heroes will have American (NOT 'Midwestern') accents, and the villains and comic relief characters will have (generally crudely affected) 'foreign' accents appropriate to the setting, or 'evil Brit' Shakespearean accents. If Aladdin and Jasmine sounding American is racist against Arabs, then I guess Belle and Cinderella are racist against the French, Snow White and Rapunzel are racist against Germans, and Peter Pan is racist against the English. Don't misunderstand, the practise of Americanising so many characters for American films is unfortunate (as is rewriting Harry Potter books so that American readers aren't confronted with the horror of words like 'jumper'). But it's stupid to arbitrarily say it's 'racist' when done to non-European characters, when it's done to European ones as well.

Get a life and stop being "offended" over just about anything and everything people say ... Political correctness be damned!

Did that person really say Cruella DeVil is a racist character?

No. Lmao. She’s accurate.
Going off and taking what isn’t hers with the utmost entitlement without any regard to anyone else.
Translation:

“IM OFFENDED BECAUSE AMERICA AND DISNEY WERE BUILT ON RACISM BEYOND OBVIOUS LEVELS AND I DONT WANNA THINK ABOUT IT! ITS EVERYONE ELSES FAULT AND STOP BEING SENSITIVE UNLESS ITS COMFORTABLE FOR WHITE PEOPLE.”

Hi there
Goofy is racist

In official Disney documents about his character they call him the n-word. You can look it up.

Like wtf Disney 🤬 also a lot of Disney characters are based off of minstrel characters, Even Mickey Mouse. And I’m pretty sure that Walt Disney was a racist