The Cast of Glee on the Cover of Rolling Stone 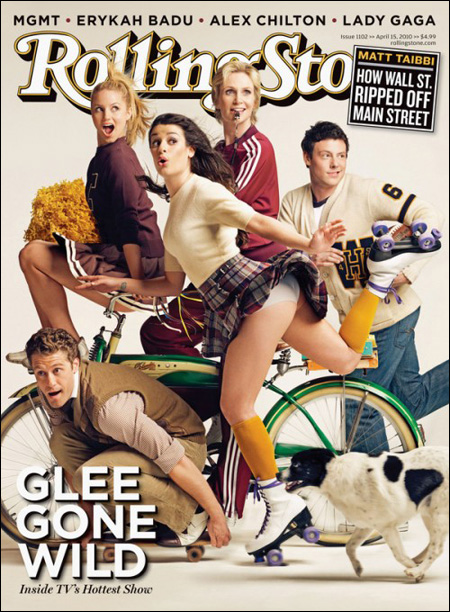 Or, as Angry Asian Man noticed, the white cast of Glee.

I get it, these are the show’s main characters. It’s just a obvious reminder that it’s awesome to see such great diversity on Glee… but never forget who the show’s real stars are supposed to be, and who usually gets relegated to the periphery.

With panties, of course.  Because without panties, there would be nothing at all going on on this cover.  Booooriiiiiiing.

Well, yes, the people of colour are excluded. So are the gay Kurt, the disabled Artie and the mentally ill Emma. Colour may not be the only issue here.

I don't really watch the show, but isn't the girl in the middle Hispanic?

On the show, she's Jewish.

Wait, I thought Rachel was ugly? The show likes to tell us she's ugly, but now we're looking at her panties?
And why is Quinn wearing the wrong color outfit?

The only kid on the show who actually has wheels is excluded from this photo.

While I personally love Glee and give it props for actually making an attempt at inclusiveness (despite the stereotypes that are ever-present. Of course Glee isn't perfect, regularly putting the asian and black male members in the background with very little development), I will say that I'm super disappointed in this cover; Namely because of the inclusion of Quinn, who is an arguably minor character despite her involvement in a major plotline. The reason I say this is that a case could be made for everyone else- Will is the director of Glee, Sue is the enemy, Rachel and Finn are the most "talented." Those four, issues with the main characters all being white aside, are definitely the stars of the show- and I'd have less of a problem with them on the cover. I feel like the addition of Quinn (pretty, blond cheerleader- despite her teen pregnancy) throws it all out of whack and if they're going to do that they should just get the whole cast in there for an awesome picture.

Then again, maybe it's all about star power. Disappointing, anyway.

Is there a reason at all for showing her ass? Does it have anything to do with the show? Or did Rolling Stone just decide there wasn't enough ass on this cover? Turn the fan on.

I read the cover article in this issue of RS. It was probably one of the worst Rolling Stone articles I have ever read. They basically just chased after some of the cast members of Glee, asked them really intrusive, "juicy" questions (example: "do you pee in the shower?"), got mad when the cast members got offended/pissed off and refused to do more interviews, implied that the female cast members were all prudes for not answering the questions, and then tried to make up for this journalistic failure by squeezing some forced profundity out of it. The whole thing sounded like a high school essay written at 12 am the night before the paper was due. Pathetic.

Also, the only 4 cast members that they interviewed were all white and able-bodied. The only "diverse" one was the guy who plays the gay kid. (Kurt?)

It seemed to me like they went into the venture expecting to get a really great, titillating story for all their idiotic bro readers to jack off to, completely failed to get such a story due to their completely obnoxious and unprofessional approach, and then were like "Oh fuck, this didn't work at ALL, maybe we can still half-ass it in time for the next issue." Really, they should've just scrapped the whole thing.

This is precisely the reason why I have steadily grown to hate Rolling Stone. Misogyny, racism, more misogyny, with an extra dose of racism. And did I mention misogyny?

Let's not forget that it's also the white, able-bodied, THIN characters that are only included in this cover. Admittedly, I don't watch Glee, but excluding a character who is both African American, and larger than most women in Hollywood is, while not particularly surprising, a pretty glaring omission.

Jann S. Wenner is credited as the publisher of Rolling Stone. Why does Jann S. Wenner want us to see a minor's panties? She may be played by an adult, but aren't all these characters in a high school?

I'd *love* to be a fly on the wall during an editorial meeting, when a room full of ostensibly postmodern sentient adults flit over every detail of a cover photo. Is she showing enough buttock? Too much? Can we photoshop her skin? Let's remove that character for some reason, and re-pose another! No, the "R" is too big!

Remember, these things are done by committee, but ultimately, it's Jann S. Wenner that wanted the panties of an (implied) minor on the cover of his magazine.

I watch glee regularly cos I like the musical numbers and, honestly, the last season got boring because, as it progressed, they seemed to be only involving the attractive straight white cast members in the major plot lines. And, save Rachael, they're a bit boring. Towards the end I couldn't care less about the pretty boi and the cheerleader and their unborn child. More Rachael, Kurt, Mercedes and Britney (the other cheer leader with the best one liners) please writers!

The only good thing I see about this cover is they kept the photoshoping of Rachael's thighs to a minimum. Yay for normal, in-proportion lady size thighs!

What are you complaining about they've got folks with both blond AND brown hair.

I've never seen Glee, but it REALLY bothered me when I saw this cover, since a) oh good, it's totally necessary to throw women on there with panties showing! and b) I did know that they're supposed to be in high school. Yeuck.

If you break down most of the top primetime shows you find that the major or lead character is a white, hetero, able-bodied person. There may be people of other colours, orientations etc with big roles but they are almost never the lead.

Some shows I can pull off the top of my head:

The ensemble crime shows like CSI or Criminal Minds tend to have more white, straight, skinny characters but don't always have a clear lead character so I left most of them out of my list.

Most of those shows above have minorities represented, sometimes in large or prominent roles but the lead character, the one the audience is theoretically supposed to identify with is almost alway a white, straight, skinny, pretty guy or gal.

The few that I could think off of the top of my head that don't fit this pattern of a white lead and some supporting diversity is NCIS:LA with LL Cool J's character as a major lead and Ugly Betty with America Ferrera. I am sure that there are others that exist but this comment is not extensively researched.

What did you expect from Rolling Stone? Don't most celebrities appear half naked on the cover?

I love Glee and this season it's going back to focusing a little more on the other characters. In fact in the episode I just watched Kurt and Mercedes talked about not getting enough solos so they took it on themselves to get to star in a number themselves.

Sure it wasn't the best idea for the cast of Glee to agree to this, but it's really Rolling Stone's usual bad judgement on this cover and the stories.

" Because without panties, there would be nothing at all going on on this cover. Booooriiiiiiing."

(Seems to me without panties we'd have even more to be complaining about & the cover might get pulled for indecency!)

From a design standpoint it is a ripoff of a cover they did for Friends years ago. Both are Norman Rockwell-esque and a outmoded. I watched the first two episodes of Glee and really can not comment on any content here. As with most magazine covers today Rolling Stone there is a lot of bias towards marginalized groups.

It sucks that none of the minorities got on here, but I should note that Jane Lynch (the actress that plays Sue) is a lesbian. So that's a bit of representation.

Here is a good example of the Rockwell-esque attempt they were making:

This cover kind of sums up why things are so messed up in general (and getting worse). I think it reveals more than the Editor realizes about "how Wall St. ripped off Main St."

On the one hand, front-and-center and in full color we've got an image of selected sexy people from the sexy time-waster du jour and a white panty hint of the no-doubt copious sexual content/innuendo that it promises and is well-known to grab and hold the attention of the easily-distracted masses.

On the other hand we have a little black-and-white box of text stuck way up in the corner of this same cover mentioning an article about one of the greatest financial frauds in human history almost as an aside. Never mind the fact that the article about Wall St. probably explains some of the dynamics of the recent meltdown that almost certainly affected most if not all of the viewers of "TV's hottest show." I guess to me it's an unintentional allegory of our current popular culture on several levels.

I suppose that when we collectively get tired of running our civilization straight into the ground, we'll stop. I just hope we manage to do that before we reach it. In the meantime, staring at each others' butts isn't helping (now don't get me wrong, there's definitely a time and a place for that, but it's not EVERY place ALL the damned time...).

There's one picture where the minority characters are IN THE TRASH.

The three characters in the trash are the chubby black girl, the Asian Goth, and the boy in the wheelchair. Only minority who isn't in the trash been is Kurt, the gay boy (top middle)