Andrea sent us a link to a post at Carpe Diem about the growing sex gap in college degrees. Current Department of Education estimates have women earning over 60% of all college degrees within 8 years: 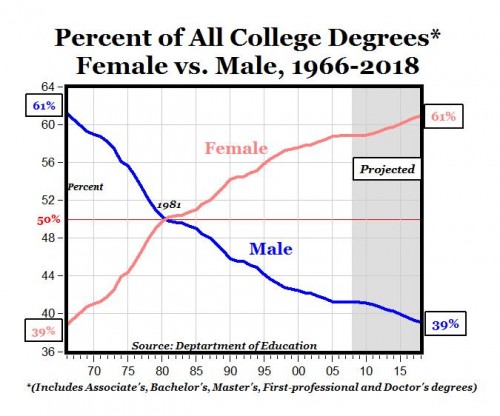 A breakdown by type of college degree:

Nothing new there, in that scholars have been aware of this pattern for a while now. The author of the post on Carpe Diem uses this data to thus argue that women’s centers are no longer needed on campuses. He also asks,

Didn’t the “journey toward equity” that is mentioned in the book [he discussed] end back in 1981 when women started earning a greater share of college degrees than men?

This comes down to a question of what equality would mean. Does equality mean simply that men and women make up about half of those in any given institution? What about the continuing differences in the types of majors men and women choose, with women particularly underrepresented in engineering and the natural sciences? Or that female college graduates still make less than male college graduates? Even among men, attendance rates vary greatly by race and class.

This isn’t to say that we shouldn’t be concerned that the gap is increasing, or that it doesn’t matter if men aren’t going to college at the same rates women are. But a bean-counting attitude toward issues of equity — that if there are equal or greater numbers of one group in an institution, they have automatically overcome any and all inequality — obscures a lot of information. For instance, a workplace could have very similar percentages of male and female employees…one group working as the lower-paid secretaries and assistants to the other.

My courses are overwhelmingly female. From that perspective, any inequity is in the direction of hurting men. On the other hand, my male students very rarely miss class because they had a sick child they had to stay home to care for or their childcare plans fell through. Issues such as sexual violence on campus, which affect female students more than male ones, might also indicate that paying attention to women’s issues on campus might not be obsolete quite yet.

Anyway, I think it’s an interesting case for starting us thinking about what sex and gender equality on campus would look like. Among other things…would men’s and women’s centers have to be mutually exclusive? Couldn’t we address the needs of male students without seeing it as a zero-sum game in which to do so we have to take away services provided to female students?

Another question at extremely selective schools a la the Ivy League is whether they pick a 50/50 gender breakdown even if, say more women apply. Is this equality? Hard to say.

Could some of the higher percents of women getting the higher level degrees be from the increasing education requirements for those going in to teaching (a very female dominated field)? Most the teachers in my local school system have at least started working towards their master degrees... I know that not all women pursuing degrees are going into something like education, but I do think it could add a few percentage points.

Also, centers for women are still greatly needed. As a mathematics major who was continually ranked at the top of my engineering physics class, I have faced not only verbal abuse, but sexual harassment. Women may get more degrees, but they are still greatly outnumbered in particular studies. Such harassment causes many women to avoid the field, and even has caused me to usually tell those in the academic world to simply call me Mike (short for Michaela). It may make some ask questions when they meet me in person, but it saves me from hearing some student complain because he noticed a girl had made a higher score on a test when he took his paper out of the pile.

I believe that some of the gap we are seeing is the gender disparity in hiring practices as regards college degrees. Men are more easily hired without a degree than women are with one, and they still earn more than women:

So even though the numbers of women with degrees are going up in a positive direction, the reason behind it is more depressing: to compete with non-degreed males, women have to earn higher and higher educations. I believe there are similar statistics on people of color with degrees versus whites without them.

And, there are many well-paying (or formerly well-paying and still well-regarded) jobs that men can take that don't necessarily require college or advanced degrees -- skilled trades, state or local government jobs such as those in highway departments or facilities maintenance -- and many of these jobs are not seen as an option for women.

I've noticed myself that men can usually get away with doing less, or more subpar, work than women can. This is anecdotal, of course, but there was a guy in one of my classes who almost never showed up compared to the rest of us (male AND female), yet the professor kept pushing back due dates for him. Obviously, there may have been something else going on in his life that was preventing him from attending, but I have never known a woman to do the same thing and expect the same treatment. Every woman I have known in college, in fact, worked twice as hard as their male peers (myself included).

This only talks about the students; what about the breakdown of male versus female faculty and administrators? I think those numbers would tell you a lot more about the experience of female college students.

IMO, Women's Centers are still needed because women students do not have the same number of role models in higher ed that men do.

Very interesting. Most of my professors have been women, but I also take classes like Anthropology, Women's & Gender Studies, and other social sciences... so that's not surprising. But the ratio is huge. Anyway... when you're talking about tenured professors, I think the ratio is more even... at least, I think I heard that somewhere. Anyone know anything about that? Though that might have to do with generational gap anyway... As for administrators, I don't know... our current president is going on 30 years, I think... so there hasn't really been an opportunity for female president. But then again, I go to a Catholic uni, where only men can be priests! Oh, the irony... 53-4% of students here are female.

I think also maybe men are taught to be more independent, go-getters when it comes to money, so they are more likely to just go and start a business or look for a high-paying job right out of high school, perhaps? I know it's just anecdotes, but the females in my high school life who didn't go to college did not seem to have ambitions other than getting married and making babies or getting hitched with some guy who would take her places... whereas the guys who come to mind were more like, I'm working for my uncle, I'm a manager at Pizza Hut, I'm making lots of money doing dangerous work... I don't know if that means anything!

As a female electrical engineer working on my PhD, I can tell you that we are far from being equally represented in my field. I didn't even have a female professor my entire undergrad experience, and by senior year I was one of two women in my classes.

I was struck by this line, which I found transparently self-serving:

"But a bean-counting attitude toward issues of equity — that if there are equal or greater numbers of one group in an institution, they have automatically overcome any and all inequality — obscures a lot of information."

Hasn't the last 40 years of affirmative action been largely about "bean-counting"? Weren't raw numbers (no matter how irrelevant or misleading) used for years to "prove" that women needed "more help"? Now that women are OVER half of all college graduates and OVER half of all wage earners, they still need affirmative action but it's NOT about "bean-counting" any more? Please.

Your own graph shows that we have entered that second world.

on another note though, I wonder if toxic masculinity hasn't been at least partially responsible for the falling (are they falling? what is the percentage of men going to college now, as opposed to in 1981 and in the 60's? is it just the proportion of men to women that's changing, or are fewer men actually going to college?) numbers of men wanting to go to college. when universities have many women, it may well be that higher education becomes feminine. already we had the split of the "soft" (fuzzy, emotional, feminine) sciences from the "hard" (i.e. serious, concrete, manly) sciences where there wasn't such a split before, and higher education is for "liberals" who are also presented as girlified.

These statistics are just so bizarre to me. I graduated with my BS in 2006 from a university that is approximately 75% male. I know that my college experience wasn't normal, but still ...

I'm a female life-sci person squeezing every last penny possible out of her 2004 state-school B.S., and I've been hearing for years that women are the majority of life sci students (but def. not professors), and seeing a huge proportion of women in the entry-level positions. I see the "biology is girl-science" attitude a lot.

[...] at Sociological Images has an interesting post on whether more women getting college degrees is really the same thing as achieving equality on [...]