College Enrollment and Completion: The Intersectionality of Class, Race, and Gender

This is such a significant problem, that college admissions officers are letting in a larger percentage of male applicants, even sometimes admitting less qualified men over more qualified women.

But this isn’t just a gender story.

A USA Today story offered this data from the ACE Center for Policy and Analysis: 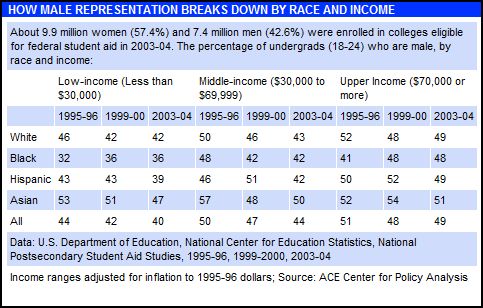 The gender gap also correlates with race.  Asian students show the smallest gender gap, whites the next smallest, with Hispanics and blacks trailing.

You might notice that the correlation of the gender gap with race mirrors the class correlation.  That is, income and wealth data for racial categories follows the same pattern with Asians out earning whites (categorically speaking) and whites out earning Hispanics and blacks.  So there may be an interesting exacerbation effect here.

The gender gaps for each racial/ethnic group, however, decreases as the students’ families get richer.  And, among the upper income groups, the racial difference shrinks to only three percentage points (from 11 among low- and middle-income kids).

The first is that, since women are less likely to drop out anyway, then it's "natural" (so to speak) that this would extend to women of color, therefore putting men of color at the bottom rung.

I've heard theories that the way our gradeschool/middle school/high school classroom culture is set up, it emphasizes things that young boys have trouble with: sitting still, being quiet, working silently. So, the theory goes, boys have a hard time fitting in to the academic environment from a young age and a higher incidence of discipline problems and difficulty with grades.

I don't know if that's true but if it is, it could explain the college gender gap as a phenomenon starting at a young age which pushes some boys out of the academic track, and allows more girls to feel like they fit in to an academic or school environment.

I'd like to hear critiques of that theory or other theories about why this is occurring. Some colleges, like Seattle University (a Jesuit college), have an extremely pronounced gender gap (I think it's 70/30 at SU).

One theory is that men are more likely to be able to find work that pays well straight out of high school, such as landscaping/construction work or driving trucks, etc.

I have read some academic blogs posts about this study and it amazes me how panicked it makes them. I may be in the minority, but I think it is positive that women are slightly higher on enrollment for a few reasons. One, there are still inequities in the workforce and it will take time and certain factors such as more women educated in a field of study than men to create a balance (law as an example). Two, as mentioned in the above post, there are a lot more high paying jobs for men than women in vocational areas that do not require secondary degrees. Third, historically in the U.S. is has been a struggle for women to even attain admission to college, so now that there are no gender barriers it would make sense that women are inviting the opportunity to attain degrees. I am concerned with low enrollment numbers for black men as they are one of the top institutionally discriminated groups. They are the most underpaid or unemployed and there needs to be a push for increasing their enrollment for equality.

There are naturally many factors that go into this, but I think the overall gist is that education is seen as a more viable option for disadvantaged women than men.

Disadvantaged men feel the most disenfranchised by the more advantaged groups because hegemonic masculinity demands an authority and power they are denied the opportunity to achieve. As a result, they are distrustful of the advantaged groups and are anti-education. Education reeks of the enemy; to play is to participate by their rules. They know they don't have the means to participate in the game anyway; the public education they will receive is terrible. The teachers don't care about them. Their own family might not care about them. It's easier to reject the system that pushes you out than admit you want, but can't, get in it. "Education is brainwashing," read the graffiti outside one of the ghetto apartments I once lived in.

For women, it's a little different. A woman's desire for bettering her life has more to do with practical reasons than those imposed by hegemonic masculinity. She has children to think about, and many of the men around her are turning to achievable work, like manual labor, or innovated and subversive work, like crime, and aren't apt to be reliable. But she knows she can rely on herself, and sees education as a means to securing her own financial future. She isn't afraid to play the enemy's game because she is less likely to see them as an enemy. There are no conflicting demands for power and authority she has to worry about. Women also have less career opportunity than their male counterparts at that level. They're expected to be housewives, or if they're lucky, get part-time work cleaning. If they don't try to circumvent the whole ugly system with education, they know they're going to be stuck cleaning toilets, one way or another.

The more you pile on race and class, the different the picture looks. The more advantaged men have higher expectations on them because they (and their parents) know they are capable of succeeding in the system. And the closer to "white" they are (how "white" our society perceives them) the easier it will be for them to feel they fit into that system, making them more likely to enter it.

Unless they are professional athletes or lucky musicians. <.00001% likelihood.

Classrooms are highly feminized environments. You'll need to deal with female domination of the lower education process to start to fix this problem.

[...] an earlier post I discussed how men, these days, are less likely than women to enroll and graduate from college.  One theory for why involves an anti-intellectualism that is specifically male.  That is, many [...]

Once again, native americans are left out of the discussion.

[...] become feminized. As a result, boys and men express less interest in and invest less in school, and girls and women are kicking their asses, scholastically [...]