Stan S. sent us a recent research report by Economist Kent Gilbreath.  He presents data illustrating gender differences in the starting salaries of college graduates with different majors, as well as data on the way in which gender differences have changed between 1998 and 2008.  The findings are in the direction you might expect, but with quite a bit of variation! 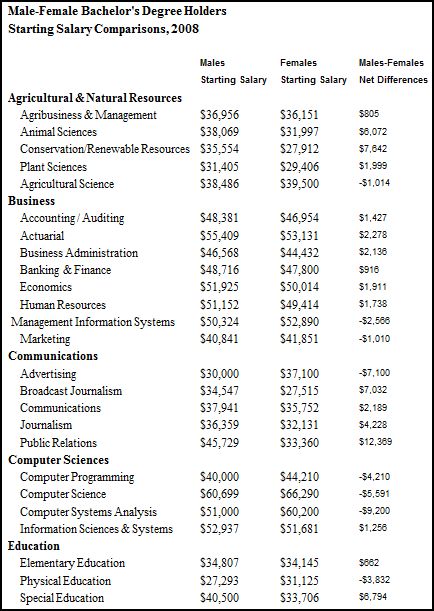 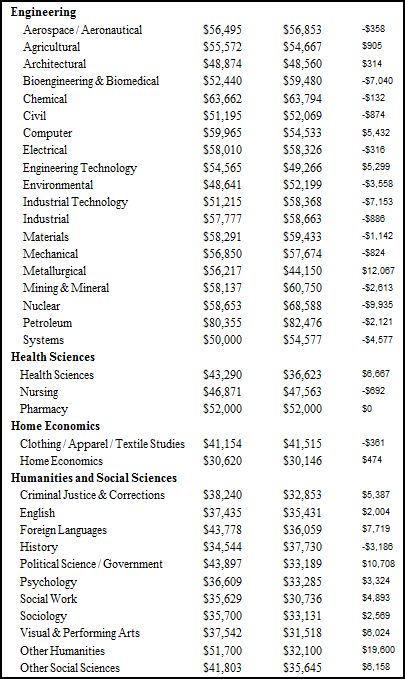 And here’s the data for the sciences, though the format is off:

Gilbreath then looks at change in the gender difference between 1998 and 2008.  Again, a summary shows that, in 58% of the cases, men’s advantage over women is growing and, in the remaining 42%, women’s advantage is growing: 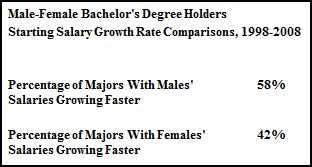 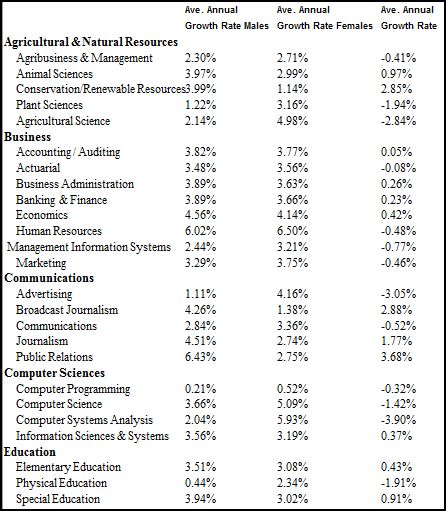 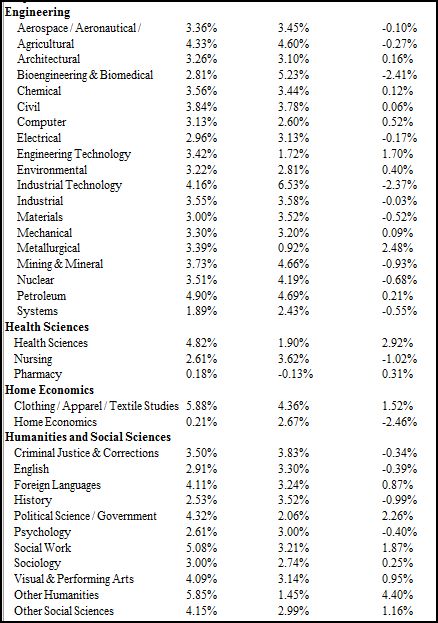 This is great data because it shows that, overall, men receive higher starting salaries than women, and their advantage is growing, but the advantage that accrues to men is not even.  It depends, very much, on what their major is.

Anyone see any interesting trends or have any stories from the field?

I thought that it was very interesting to see the types of careers that the males and females dominated in. I felt that in more of the careers that females dominated there was definitely an interpersonal aspect where people had to interact with other people on a regular basis. On the other hand careers that involve more analytical components seem to be dominated by males.
I think this general trend shows how the social stereotyping of men and women may affect their success in their careers.
Women tend to be portrayed as the busy housewives who are trying take care of a family, home and fit in a career while men are portrayed as very career oriented.

While it angered me to see those facts, it simultaneously validated what I'd noticed in the local library systems: that men with little experience shoot upwards to professional and management positions more quickly than women with more experience, and that men, even recent grads, are given incredible deference and special treatment.

This is a very interesting analysis. However, it doesn't address the number of men v. women in a given major, which could be impacting these salaries. Perhaps when one gender is a majority of a given major's population, the other gender gets an edge through supply/demand.

For example, take education - women make more in physical education (historically the domain of the male, buff gym teacher), while men have higher salaries in elementary education and especially special education - both traditionally more female roles. This corresponds to the experiences of a couple male friends of mine who have gone into elementary education - they found that elementary schools were actively seeking to diversify their teacher workforce by evening out the gender ratio, i.e., adding more men.

Did you notice though - even in the report that is trying to analyze differences there are inherent biases? In both the tables - women gaining or starting with a higher salary - both cases are represented by negative values.

I thought it was interesting how close the trends were.

I couldn't get the link to the report to work, but from retyping everything into Excel, men were increasing the gap in 36 fields, and women were closing it (or increasing their lead, like in advertising) in 33. A simple average of the change rates gave me positive 0.2%; the majority of this comes from a few big outliers (physical sciences, environmental sciences, etc.). That's a (relatively, when compared to the overall differences in wages earned) small number; it could easily be explained away by things other than actual discrimination on the HR departments level (differences in aggressiveness when negotiating, gender balance of different schools and major concentrations within those schools, etc).

Also: are any other variables accounted for? The description of the source data sounds like it's relatively limited, but I'd like to see what factors were taken into account.

I found the Communications section kind of shocking, actually. Women command more in advertising, presumably because there are fewer women in the field(?), yet in PR the numbers are almost reversed. I think of these two fields as very closely related so that was really odd to me. Are there fewer men in broadcast journalism? That one was also a puzzle.

I'm not surprised by the Computer Sciences section because I know there has been some attempts toward getting more women into the field. I was kind of surprised by the Conservation/Renewable Resources' numbers -- is that a field dominated by women?

Interesting! I'm a female materials engineering student with a metallurgical emphasis. Now I know which to emphasize to employers now! I couldn't get the source link to work though. Also, the "sciences" section was left off of the first table.

There was no discussion of the data gathering process. There is no way to know how representative these numbers are for the entire US population.

Then, when looking at only the gender comparison, no one questions why is it that a Jr HR person should start at 50K and a school teacher at 34K.

A meteor falls on a house and kills everyone in the family: dad, mom and 2 kids. Headlines read: 75% of deaths from meteor are women and children.

This study does the same thing. When I first saw it I thought it was a joke from the Onion. Was this done as propaganda for some group or is someone really that ignorant of how to use numbers?

Someone pointed out that my sample size in the meteor hitting a house example was too small to be meaningful. But actual studies show that meteor fatalies really are 75% women and children, over time and in all countries.
(someone please explain this to all the English majors and female engineering students)

When NOW learned of these studies showing meteors were targeting women and childern they demanded stiffer penalies for meteors. The VAWA act now includes meteors as perpetrators of violence against women. Police have mandatory meteor arrest policies and prosecutors have 'no drop' rules for meteors. Yet still the sexist meteors continue to pick on the most helpless victims in our society. Will no one stop this senseless violence?

Senate Majority Leader Harry Reid (D-Nev.) today called for support for his jobs bill, saying everyone knows that meteors who are out of work tend to become violent.

MRAs (meteor rights activists) challenged Reid, saying he was blaming all meteors for the actions of only a few, and that most meteors have never harmed a women or child in their lives.

That's why pseudoscience studies like this one are evil, they get used by ignorant people to push for stupid public policies which hurt everyone.

Regarding the salary study, maybe the author should ask an economist for ANY possible (supply/demand) reason why salaries in "men's" jobs are increasing more that "women's" and what that REALLY means. (yes, i am aware he is an economist)

sorry to be snarky, this coming on top of Reid's comments is too much.

Ok, sorry again. I was directed here by a link from another site referencing this study as a reason for enacting even more discrimatory policies against men and boys. Posting studies like this gives ammunition to bigots. The study as presented here says nothing statistically relevant; it simply has headline appeal.

I find it interesting that women in the engineering branches tend to be paid more than men. I wonder why that is, especially since men tend to dominate the engineering fields.

On Being A Pretty Pretty Princess « Bitches Get Stuff Done — March 1, 2010

[...] interesting post from last week at Sociological Images, where they observed the difference between starting salaries of college graduates based on gender), and she does a great job of demonstrating what makes us buy into these ideas. [...]

Was the data from starting salaries at ANY job, or only jobs that had something to do with the major? So, if a Political Science major got a job as a secretary, is that still counted in the "Political Science" data?

[...] posts: sex  and starting salaries of college grads, joblessness by race/age/sex/education, more on joblessness, race, and education, men in [...]

Men dominate intellectual work because they are smarter; check SAT scores -- they've come out on top in all three subjects since year one.

Suck it up, girls and girly-men.