How and Why People of Color are Included in Advertising: 4th in a Series

In this first ad the idea that each body is different is illustrated by including women of different fitness levels, ages, and races. 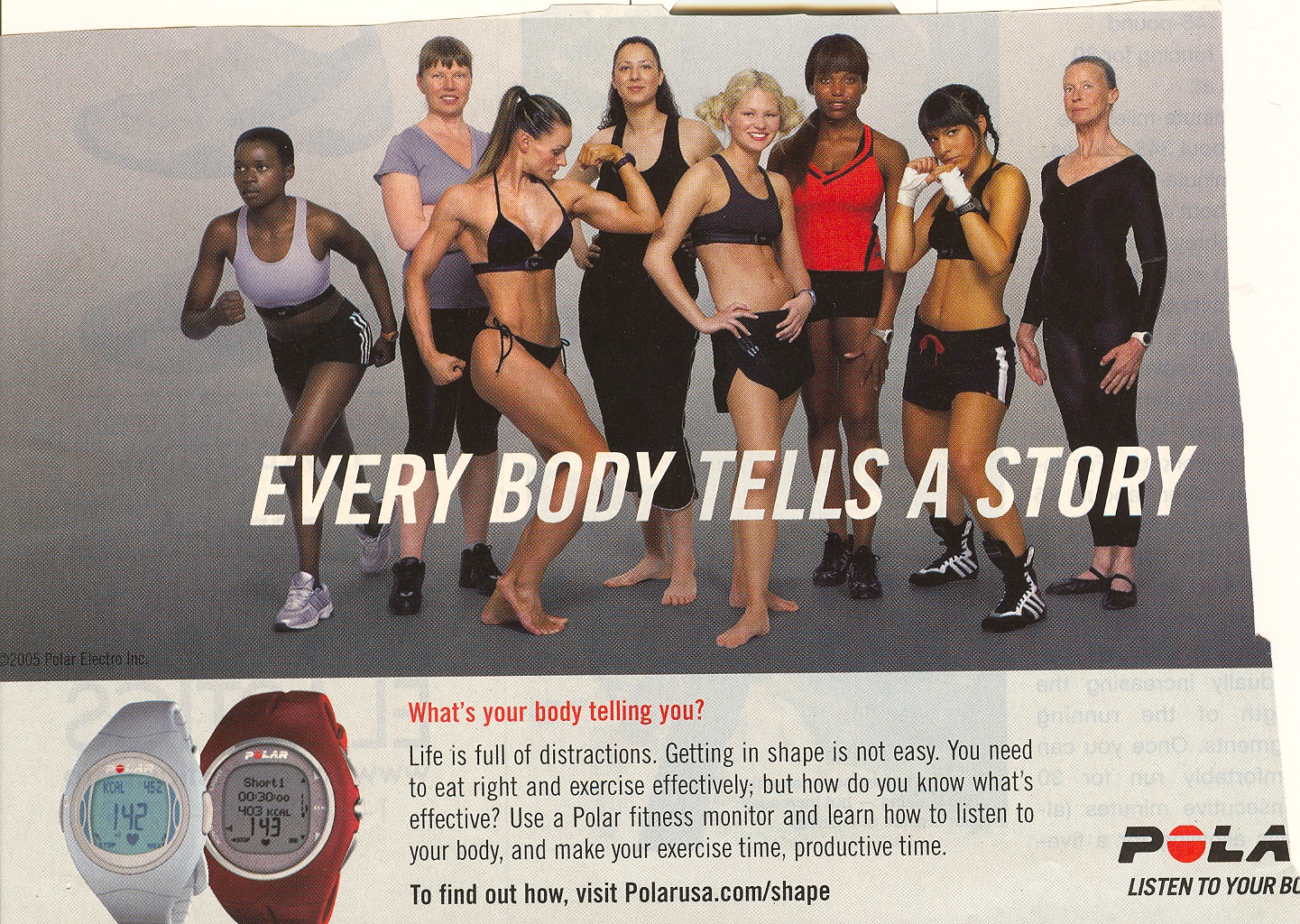 In this ad, Levi’s uses a woman who appears Latina to sell their jeans, which come in various fits because there is “a style for every story.”  The idea is that people are different; not everyone wants the same cut of jeans. 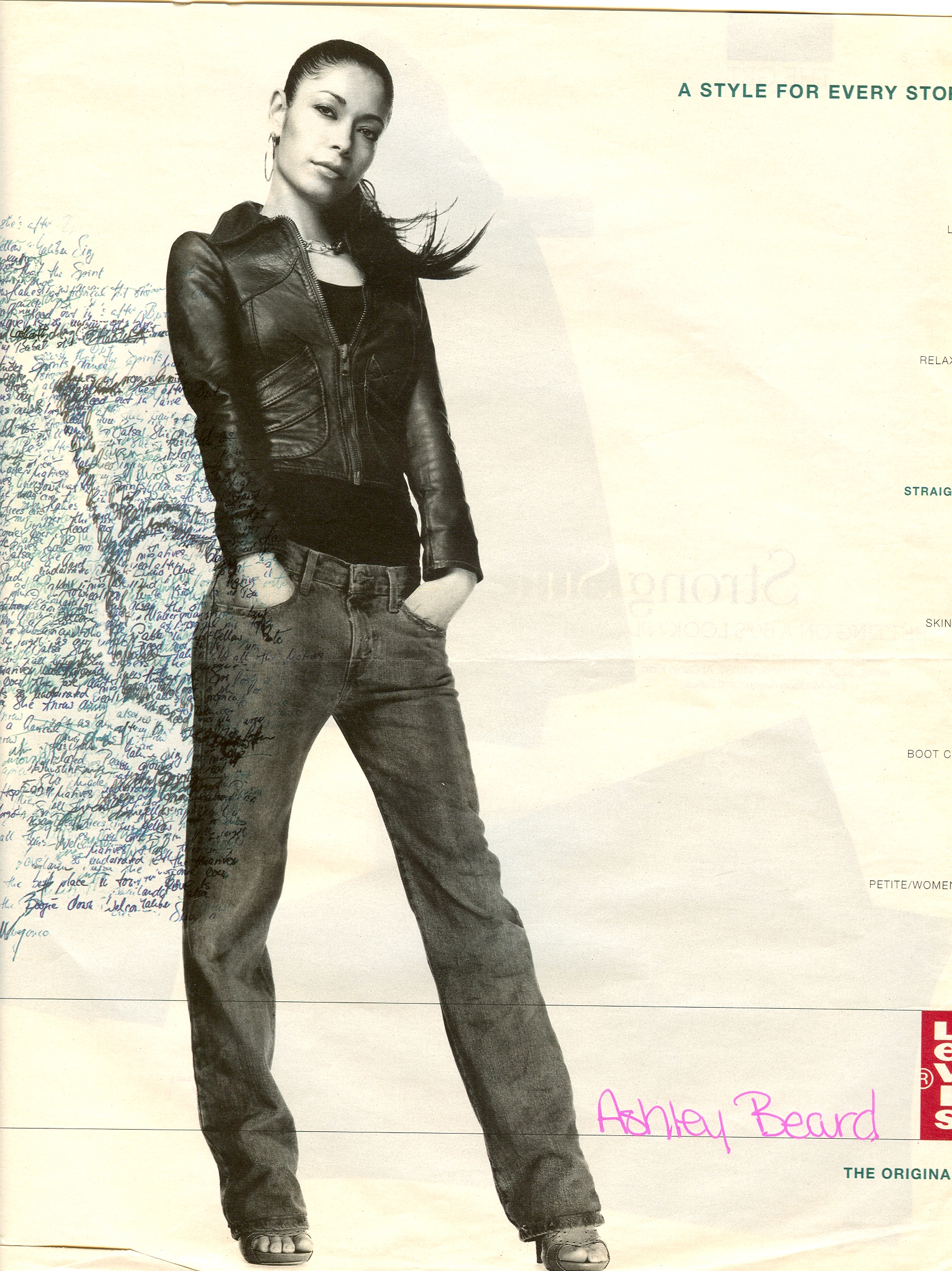 In this Toyota ad, the copy says “For every expression, there’s a Toyota.”  People are unique and so, apparently, are Toyotas.  Race is used to communicate the notion of human diversity. 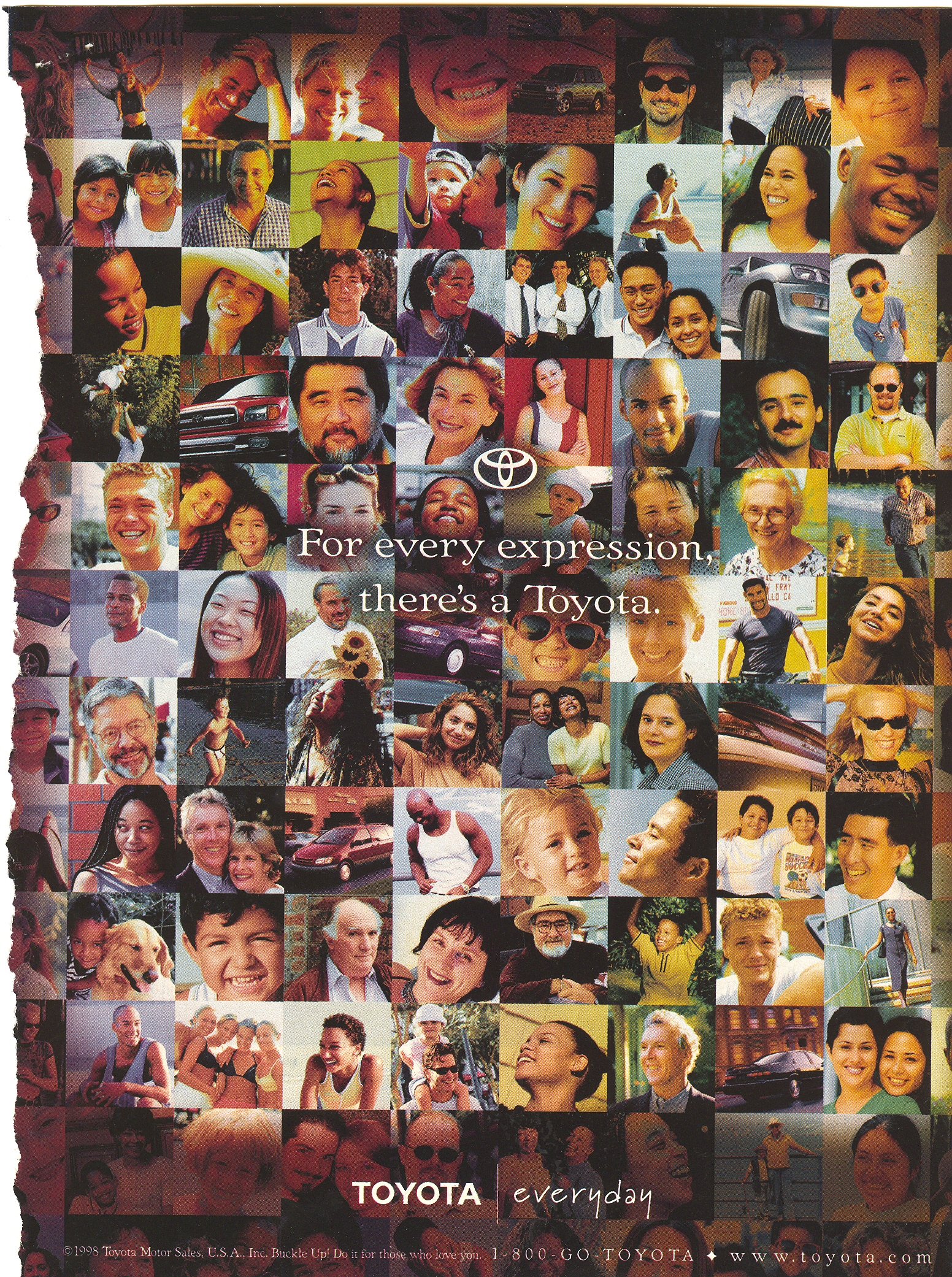 This is an ad for Playtex bras with half sizes.  The implication is that people’s bodies are more variable than the A, B, C etc sizes suggest, so half sizes accomodate that variety.  I think this ad is particularly interesting because the model is racially ambiguous.  Maybe she’s half Asian, Latina, or white, and she’s being used to sell a product that now comes in half sizes. 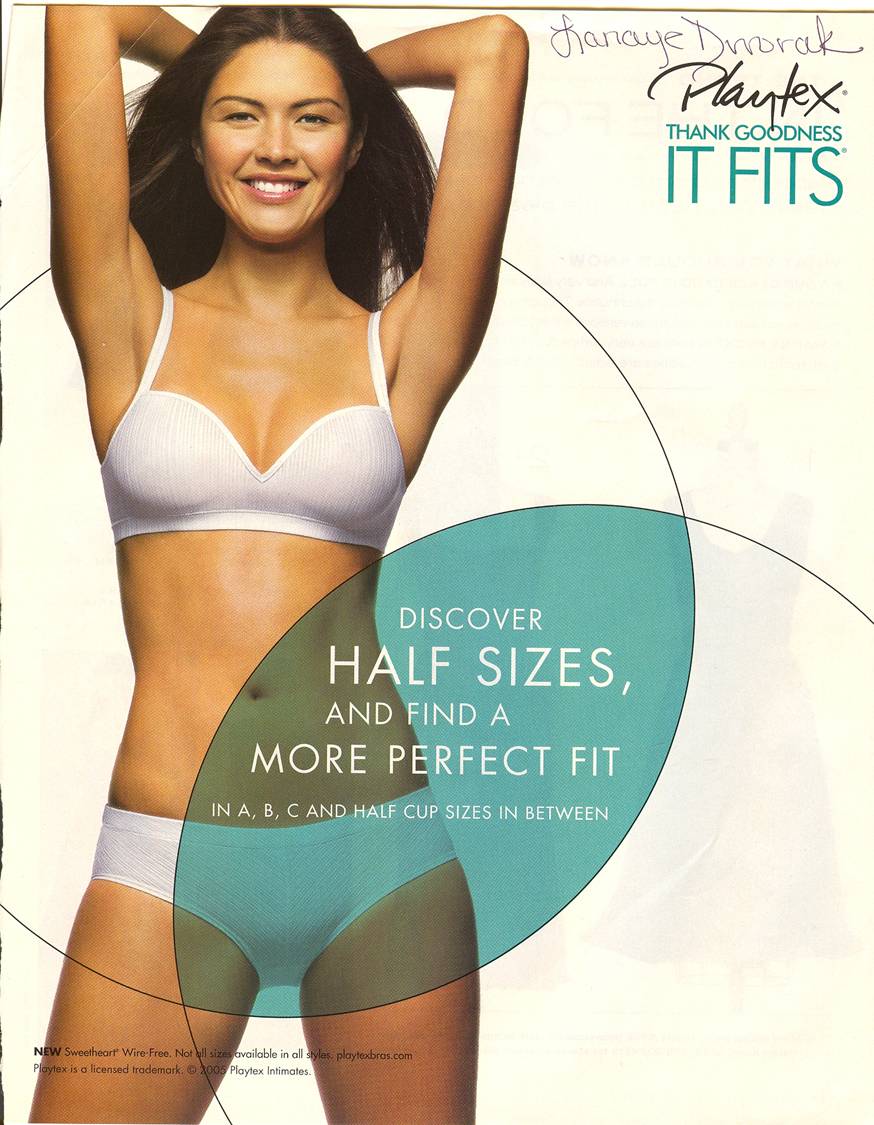 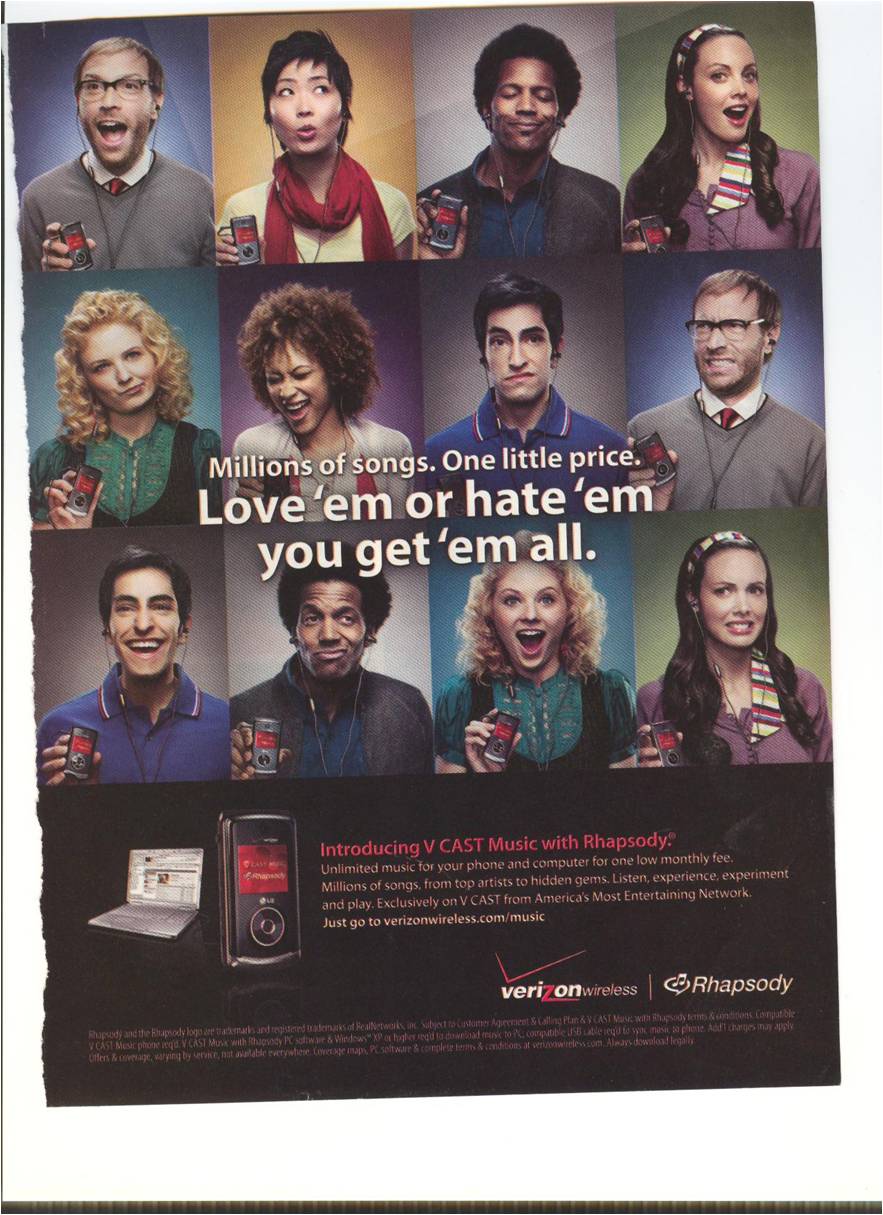 Next up: Including people of color so as to suggest that the company is concerned with racial equality.

It's funny that the "Latina" jeans model's head seems to be shopped onto another body. Not only that, but if it is her body, I find it amusing that she still has a body type that is widely accepted by white women as normal and acceptable. They couldn't possibly select a Latina woman with child bearing hips- She's "ethnic" enough to have that charm of not being white, but she's white enough to be classified as commercially beautiful.

I always assume that in multiple-faces ads, like the Toyota ones, the multiplicity of races is out of simple political correctness - if they didn't include a single non-white face there, they would be highly criticized for it.
It gets silly and amusing in a country like Israel, where there IS no immigration, where they still include various stock photos of Asians and Africans (which are clearly not members of the only African-origin minority in Israel - Ethiopians, becuase, you know, all black people are the same).

That said, Israelis do have an entirely different perception of at least female beauty than North Americans do, at least judging by their commercials and advertisements. I remember seeing a tv commercial from Israel that depicted a woman as so beautiful that men would run into things from staring at her while walking, and she had medium-brown skin with a very orange cast, reddish-brown hair, and brown eyes. In North America, a woman with that colouration would never have been presented as being that attractive. I had rather gotten the idea that Israeli ads tended to do that because Israel is at least getting to be one of those cultures where pretty much nobody looks overly much like anybody else.

By the way, that woman in the bra ad doesn't look "half-anything" to me; she looks like any number of people from the British Isles -- Welsh, Cornish, Manx, Highland Scottish...

What Interrobang said about Israel.

(sigh, I knew I was getting myself into a fix). Israel has virtually no legal immigration of non-Jews. Those people who make aliyah are Jews, so it's like saying Germany would have immigration if it only allowed Germans to migrate into it - that's plain silly. Even though Jews do come in quite a variety of shapes and colours, they're still far from encompassing the whole gamut of human variation - East Asians, for example, aren't represented.
Guest workers are hardly part of the everyday lives of most Israelis. I mean, they're there, we see them, but they're still "invisible" to most Israelis, and very rarely do they manage to stay for long periods of time, especially since the "immigration police" started working - and I say this with sadness, as I support legislation to enable permanent residency and naturalization for non-Jews.

The bra-girl looks American to me...you know, can't tell where she or her ancestors are from (genetically/ethnically).

I'm mildly piqued by the way that in the last ad, everyone's face appears twice... except for the African-American woman and the Asian woman. There are four different women and three different men, but the total number of pictures of men and women is the same.

Maybe there's no actual message... it was originally meant to be a slightly larger ad or something... but it still seems odd.

HOW AND WHY PEOPLE OF COLOR ARE INCLUDED IN ADVERTISING: 7TH IN A SERIES » Sociological Images — August 12, 2009

HOW AND WHY PEOPLE OF COLOR ARE INCLUDED IN ADVERTISING: 6TH IN A SERIES » Sociological Images — August 12, 2009

WHY AND HOW PEOPLE OF COLOR ARE INCLUDED IN ADVERTISING: 3RD IN A SERIES » Sociological Images — August 13, 2009

HOW AND WHY PEOPLE OF COLOR ARE INCLUDED IN ADVERTISING: 5TH IN A SERIES » Sociological Images — August 13, 2009

I am still trying to figure out why cars, jeans, underwear, and phones are primarily advertised at white people...last time I checked, most everyone used those things.

Alicia, having full hips is something white women have too. Ads portray all women as very thin and use thin models as the industry standard, but women of all races come in many sizes (including white women with hips.) Why make everything about race? Not everything is.

And saying "She’s 'ethnic' enough to have that charm of not being white." Sounds, well, racist. And connecting latina women as being with "child bearing hips" is silly. Last time I checked white women had child bearing hips as well.

another reason to like the bra add is that the model is not only racially ambiguous, but she is also does not exhibit the usual perfect 12-year-old-skin that hardly any woman possesses after the age of 25

Is it just me, or does the woman in the bra ad look like her face was photoshopped onto another body?

[…] denote being a cool brand that knows what’s what. Another is the Dove approach, also adopted by Levi’s, Toyota, and Playtex and pioneered by […]