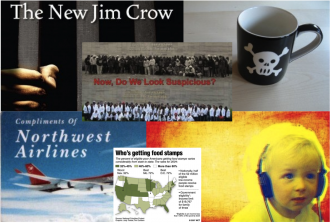 There’s no mistaking it: this week’s talk focused on the acquittal of George Zimmerman, the Floridian who killed teenager Trayvon Martin in February 2012. Below, you can find some of the week’s pieces about Martin, Zimmerman, and privilege here on The Society Pages, as well as a few other topics we hit on.

In the meantime, I’ve gotten two other suggestions of palate cleansing items to bring to your attention:

Sociologists: be sure to check out Scatterplot’s “Clusters of Sociology,” by Neal Caren. Grad board member Sarah Lageson writes: “[It’s] a network analysis of published sociology papers, looking at how the most cited articles cluster together over time, which ends up mapping on to what we think of as sociological subfields (i.e., crim, education, race, etc)… [a] cool application of network analysis [that] shows how really important pieces are central to subfields, as evidenced by the continual links to other important articles.”

Everyone: A fun piece from Steve Kraske in The Kansas City Star on the history of “Prairie Home Companion,” its upper midwestern cultural relevance, and why Lake Wobegone is “real.”

“Visualizing Punishment,” by Sarah Shannon and Chris Uggen. An actual look at disparities in imprisonment across states, over time and by race.

“Wearing Privilege,” by Jennifer Lee. Speaking of privilege, a UC-Irvine sociologist reflects on knowing about the status privileges she carries (as non-black, highly educated, female, etc.) and feeling that privilege at work in the wake of Zimmerman’s acquittal.

Related: “Teaching Privilege to the Privileged.” Professors weigh in on courses meant to make white privilege visible even in an ostensibly “colorblind” age.

“Michelle Alexander on The New Jim Crow,” with Kia Heise. Professor and civil rights lawyer Michelle Alexander shocked many when she claimed, in her 2011 book, that the racial dimensions of the American criminal justice system now constitute a reinvention (or continuation) of the pre-civil-rights era Jim Crow laws.

“By Any Other Name,” by Erin Hoekstra. As soon as I hear on NPR that “yo” has become the gender neutral pronoun of choice among kids in Baltimore, we’re reading Dalton Conley writing in Vogue about his own kids, E and Yo, and why the Civil Rights Movement changed naming conventions in the U.S.

“Documentaries on Race, Gender, and Sexuality in the Media,” grad student Kyle Green shares his favorite picks for movie day.

“If Immigration Reform Is Enacted, Will Newly Legalized Migrants Have Access to Federal Social Benefits?” by Cybelle Fox.