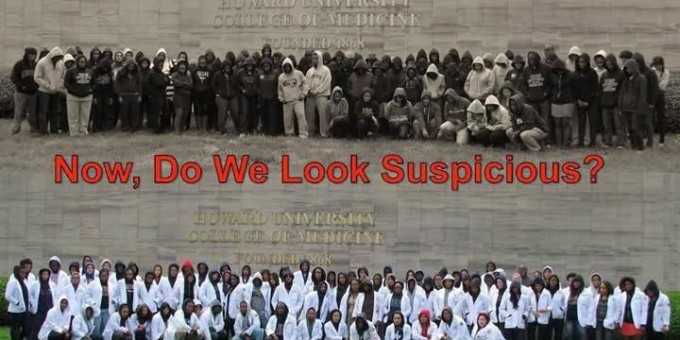 Trayvon Martin was a black teenage boy. He was walking home from the convenience store when he caught the attention and ire of George Zimmerman. Perceived as a “punk” and a threat, Martin was accosted by the older man, and a physical altercation ensued. Trayvon Martin died when he was shot through the heart at close range. Though Florida’s expansive “Stand Your Ground” laws were invoked in media conversations, that defense never even entered into the trial. Zimmerman was acquitted when a jury decided he’d killed Martin in self-defense. Zimmerman has since said Martin’s death was “God’s plan.”

Some Americans believe that race was not central to this killing or to the case that followed—they have believed it from February 2012 right up until today. But ask yourself: How many times you have been stopped and harassed because you looked threatening or suspicious wearing a hooded sweatshirt? For me, an Asian American female, that number is zero.

Yes, my gender alone distinguishes me from Trayvon Martin, but my partner Mike is a white male, and he, too, can only say “Zero.” We have never been stopped nor questioned, no matter how many times we’ve pulled on our hooded sweatshirts for warmth (and, in my case, to hide sea-tangled hair) after early morning surfing.

Stopping for breakfast or to run errands, Mike and I may not look polished in our hoodies, but we’ve also never had to worry that our appearance would cause suspicion. That’s privilege. It’s such a privilege, this presumed innocence of ours, that the morning after Zimmerman was acquitted, we went ignored even while acting suspiciously. Hoodies up, we casually stopped to look at a condo for rent in an affluent beach community in southern California. We knew from the online ad that the condo was vacant, so we parked outside, walked up the stairs to the unit, and peered into its windows. We sauntered around the grounds and walked into the unlocked community laundry room and garage. Several neighbors saw us, and they smiled.

I couldn’t help but think that the scenario would have been very different if Mike and I were black. Mike and I don’t have to wear our class in order to obviate being treated like threats or criminals; we can wear hoodies and board shorts without worrying that others will be suspicious, fearful, or make assumptions about our class status. Just being “not black” affords us this benefit of the doubt. It is a privilege because it is not something we have earned, but it is gifted to us every day regardless. I have always known about my privilege intellectually, but I felt it keenly last Saturday.

That some are afforded this privilege while others are systematically denied should make us all more empathetic. People perceive and experience the same event differently, depending on visible status markers such as race, gender, age, and class. Such status markers are more than just categories, they form a “system of social practices” that organize social relations. Status markers presume difference, and so people will react to and engage with Mike or with me differently than they would with someone like Trayvon Martin, even when we’re dressed the same.

We would like to believe that we don’t make assumptions based on race or gender, but evidence proves otherwise, as this social experiment of three individuals (a white male, a black male, and white female) trying to steal a bike clearly reveals:

As the sociologist Robert K. Merton insightfully observed nearly three-quarters of a century ago, “The very same behavior undergoes a complete change in evaluation in its transition from the in-group to the out-group.” As the video above indicates, the behavior of a black male (an out-group member) is regarded entirely differently than the same behavior of a white male and white female (in-group members).

The in-group/out-group divide goes further, with grave consequences in our criminal justice system. For example, Jennifer Eberhardt’s research has shown that race affects the severity of sentences that juvenile offenders receive, even for the same crime. Just the idea of a black juvenile offender leads people to imagine juveniles more like adults. Even liberal white Americans who claim low levels of prejudice project more blame onto black boys and sentence them more harshly. As Eberhardt has shown, “race has the power to dampen our desire to be merciful.”

I don’t have children, but if I did, I don’t know how I would explain Trayvon Martin’s death or the acquittal of his killer. But even just imagining being a parent to a black son makes me feel immense empathy for the parents of young black men. Can just that simple exercise make others more aware of race and class privilege, more aware of the power they have to recognize and even challenge that privilege and its consequences? As Henry David Thoreau asked, “Could a greater miracle take place than for us to look through each other’s eyes for an instant?”

The bike thief video made me hot in the face. How incredibly maddening!

Beautifully written and thought-provoking. Thanks for that.

As a Caucasian male growing up in the skateboarding community I was often confronted & stopped by security guards, rent-a-cops, & police. This was obviously not because of my color, but because of judgment of what we might be up to (yes, during that time authority figures saw us as up to no good “punks”). I had a gun drawn on me during two occasions by security guards. When asked why they said they felt threatened that I was carrying a skateboard which could be used as a weapon. Now here’s the important part! Did I think these assholes had power trips? Yes! Did I think they were profiling me in a sense? Yes! Did I think it was fair? Not necessarily. I did however not further engage or attack the security guards. I decided to disengage the situation. Even as a rebellious teenager I knew if you made any advancement you gave them the authority to give you hell. Stop making everything a race issue. PPL get profiled all the time regardless of race.

As a older white lady,I want to say this I grew up in the south . I have black friends and white friends.When I was school you didn't have black friends but guess what I had several. I really feel like race wasn't the issue with Trayvon I think it was in Zimmermer head that he was a real cop or god and on that night I really think it would have happen to a white person, asian person. I didn't agree with what the jury said Zimmerman should have been found GUILTY and serve time in jail. I followered the trail on TV and Zimmerman was caught in several lies. Thanks for letting me get this off my chest.

This world is only rotating its not evolving when it comes to the issue of race and humanity!

[…] had some wonderful examples on our site—Jenn Lee’s reflections on gender and privilege, for example, or Joel Best’s changing views on Social Security in the context of approaching […]