Bodies in the Justice System 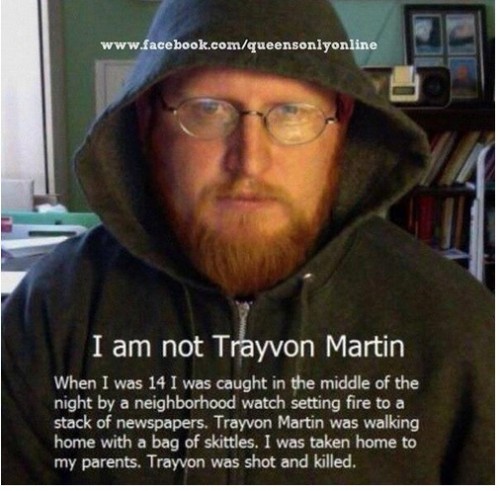 George Zimmerman was found not guilty in the murder of Trayvon Martin. And yet, Martin, a 17 year old boy, is dead. Killed by Zimmerman’s lethal gunshot. Protestors have taken to Twitter, Facebook, and the streets. Here, I want to try to make sense how this case is far more complex legally than it is morally. In what follows, I argue that both bodies and laws are technologies—or more specifically—materialized action, and that the intersection of their imbedded values and assumptions afford justices processes which feel, at a visceral level, generally unjust.

Much of the outcry in response to the George Zimmerman verdict centers around the implicit charge of guilt against Trayvon Martin in light of Florida’s “Stand Your Ground” law (SYG). The law essentially says that people who feel like they are under bodily threat have the right to fight their attackers with the lethal force of a firearm. Because of this law, the key question in the case was whether or not Zimmerman was acting in defense; whether he was, in fact, under bodily threat. The prosecutors argued that Zimmerman was not under bodily threat, while the defense argued that Trayvon did pose a serious threat to Zimmerman. Within the trial, the distribution of violent acts remained disputed, with both the defense and prosecutors claiming a taped voice calling for help was Zimmerman or Trayvon respectively. Although some protestors continue to focus on the distribution of violent acts, the broader argument is that Zimmerman targeted Trayvon because of his race, followed the boy, and created a violent situation.

The outcome—a not-guilty verdict for Zimmerman— suggests that Zimmerman did experience a dangerous situation, and his actions—fatally shooting 17 year old Trayvon Martin—were justifiable. To be fair, the verdict technically says that there is a “shadow of a doubt” surrounding Zimmerman’s actual threat level, but the fact remains that 1) Trayvon did not get the benefit of any sort of doubt, and 2) Zimmerman’s innocence necessarily implies a degree of guilt for Martin. This is not to say the verdict was legally wrong. Rather, it is to say that the law needs to be examined in a more critical light.

Protestors’ critiques highlight implicit racial assumptions perpetuated by the case, and relatedely, the ways in which laws are always subjective and unequally applied. Concretely, protestors demand that we recognize how Martin’s black body, clad in a loose fitting hoodie, came to be construed as a threatening body. A body which deserved to be followed. A body which deserved to be confronted. A violent body, from which any aggressive act—no matter the act’s provocation—was dangerous enough to justify a lethal defensive response.

I have argued previously that the body is a technology, or more specifically, the body is materialized action.  By this, I mean that the body is an adaptable mediating device, one with multiple meanings and a mutually influential relationship with the world around it. The body communicates and is communicated with. The body simultaneously acts agentically and is acted upon, in both expected and unimaginable ways, with both expected and unimaginable results. Importantly, bodies and embodiment—though meaning, movement, and experience are often taken for granted— begin always with human subjectivity. Bodies are construed, experienced, and altered through available cultures, languages, troubles, and desires. In this vein, I also argue that laws are technologies, acting upon humans, but always imbued with cultural assumptions and human bias.

It is with this framework that we can understand the necessarily un-objective nature of laws as they act differentially with regards to different bodies, producing at times, uncomfortable results.

With regards to this case in particular, the black body, in U.S. culture, is a devalued body. This is evidenced in popular culture representations, poverty rates, and what black mothers tell their sons about clothing choices. Moreover, laws have cultural bodied meanings built into them, as evidenced in particular by the mass incarceration rates of young black men.

Laws of self-defense (such as the SYG law), are intended, no doubt, to protect the rights and safeties of those under attack. They are intended for people like Marissa Alexander of Jacksonville, Fla who used SYG to justify firing warning shots at her allegedly abusive husband against whom she had a protective order. These laws are imbued with values of personal freedom, personal responsibility, and bodily protection.

And yet, as technologies, these laws can act in unimaginable ways.

For instance, the SYG law became a legal justification for George Zimmerman to kill Trayvon Martin.  While incidentally, the law failed to protect Marissa Alexander, who ultimately received a sentence of 20 years in prison for attempted murder. The mitigating factor, I argue, are the meanings of the bodies/technologies towards which laws are applied.

Oh, did I mention that Marissa Alexander is a black woman?

Laws are imbued not only with values, but also assumptions. In the U.S., laws are imbued with assumptions of equal application (due to embedded values of equality in general). This becomes problematic when, in fact, humans are not equal. Laws cannot be colorblind, because people are not. As such, designations of “criminal” and “victim” can vary wildly, as both interpretations of the conditions of a case, and larger designations of what is or is not deemed criminal activity, are always raced, classed, and gendered, without any explicit claim to their root biases.

You make an excellent point here about different bodies being treated differently under the law, and I think its interesting to look at what happens in those rare instances when bodies are colored in the eyes of the law.

Hate crimes (granted, not just about race but my point still works) work as a binary. It either is, or is not, a hate crime. In the Zimmerman case, the prosecution couldn't find enough credible evidence to charge him with a hate crime which has the unfortunate effect of silencing all discussions of racial motivation. I'd call this an inescapable problem of large bureaucracies (states) that need to compartmentalize and rigidly identify social phenomena that are either pervasive or highly contingent.

There are plenty of expert witnesses out there in the world that could help build a very convincing case that race played into this tragedy, but our court system isn't set up to acknowledge and admit things like structural racism in these sorts of cases.

Also, it should be noted that the defense did not actually use the SYG defense but for the sake of your argument and this thing we call a "national conversation" it doesn't really seem to matter. http://www.freep.com/usatoday/article/2517507

DB-thanks for the comment. I think it's a really important point that hate crimes are binary. The notion of a "hate crime" is overall a problematic thing. It incriminates those individuals who engage in explicitly racist acts, concealing any sort of systemic racism. The logic of "hate crimes" defines Racial crimes are those enacted by individuals. Period.

Zimmerman did not engage in a "hate crime." However, the existence of hate crimes, as a category of crime, take away logic and language with which to talk about the deep racialization involved in the interactions between Zimmerman and Martin.

Thanks for pointing out the SYG issue. Actually, it wasn't the crux of the Alexander case either. Really, she went to jail for child endangerment. As you say, though, this is the law on the lips of public conversation. Regardless, Zimmerman used a self-defense argument which similarly implies that his need of defense was strong enough to justify lethal force.

[...] was acquitted in the murder of Trayvon Martin—“acquitted” as in found not guilty of anything, legally speaking. Some white people—the sorts of white people I follow on Twitter, or who ride retweets into my [...]

[...] Not Trayvon Martin” meme nothing more than widespread white guilt and self-congratulation? Black Bodies in the Justice System. Consumers, retailers, and tracking: camera 1, [...]

[...] I find it quite interesting that everyone who claims the Zimmerman case was a triumph for the rule of law to the letter has not celebrated the perfectly legal violation of an affluent white woman’s agency and her [...]