“I Am a Man”: Black Men’s Claims to Humanity

One of the slogans that would strike down legalized segregation was “I Am A Man.”  It challenged the centuries of dehumanization that had justified both slavery and Jim Crow.  The beautiful, simple slogan, and its delivery, is pictured here: 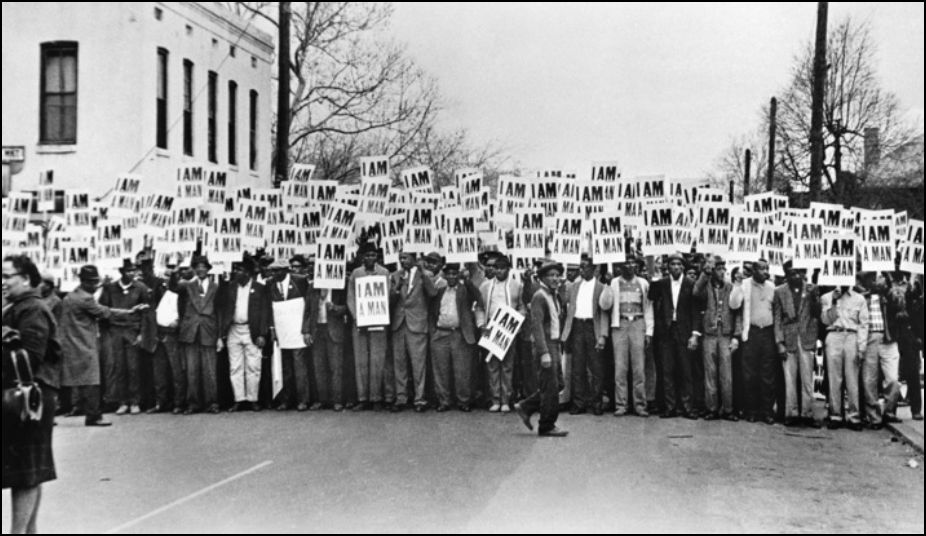 Borrowed from NPR, this photo features a group of sanitation workers marching in Memphis in 1968.  Photograph by Ernest Withers.

This post originally appeared in 2010.  Re-posted in solidarity with the African American community; regardless of the truth of the Martin/Zimmerman confrontation, it’s hard not to interpret the finding of not-guilty as anything but a continuance of the criminal justice system’s failure to ensure justice for young Black men.

And to think, this was happening during the Norman Invasion ;)

You might want to review the second line of this piece.

>One of the slogans that would strike down legalized segregation was “I Am A Man.” It challenged the centuries of dehumanization that had justified both slavery and Jim Crow.
But only for men, huh.

"It’s not a mistake that they chose “man” rather than “person” or “human.”"

This slogan always bothered me a lot. This is specifically about men communicating with other men, a call for brotherhood.

Women are intentionally left out. Things aren't so different today (Bros before Hoes).

corinnemic has a point. You can't fight everything at once. And I don't
think people should be demonized for working on one injustice at a time.

I like how this slogan echoes the abolitionist "Am I not a woman and a sister?"/"Am I not a man and a brother?" images, only in this image, 130 years later, the African-Americans are speaking for themselves and telling instead of asking.

(Apropos of the discussion happening in this thread, the man/brother version of the abolitionist image came first, designed by a white, male abolitionist, and the woman/sister one was developed later by female abolitionists (also white). But the "sister" version may be more famous today--that's the one I remember from my elementary-school textbooks.)

Why are people being trying to qualify or apologize these men using the slogan, "I am a man!" As if they were being ignorant and insensitive... if they had only been more enlightened, right?!

There is NOTHING wrong with it. There is nothing inherently wrong with using gendered statements. They're not inherently sexist. It's not exclusionary to women. It doesn't preclude a call for women's rights. It's not saying, "I am a man, but she is a dirty animal." Such statements are not dependent on the historical context... if a group of oppressed men used this slogan today, it would be no less appropriate, no less powerful.

I'm wondering if the transsexual women demonstrating outside the Michigan Bygots festival do something similar. Some interesting echoes, anyway

FWIW, this was also the last strike Dr. King worked on before he was assassinated. Doesn't have much to do with anything, but it's an interesting historical fact...

This picture is a bit contradictory, since, while it shows a fight against de-humanization it doesn't fight de-individualization so well, since all of them are holding the same sign, making them look more like a mass than a group of individuals.

Not to detract from the content of the image, but this recent bit of news about the photographer adds a whole extra layer of troubled history to it.

LW closes by saying, "regardless of the truth of the Martin/Zimmerman confrontation, it’s hard not to interpret the finding of not-guilty as anything but a continuance of the criminal justice system’s failure to ensure justice for young Black men." I would agree if this was restated: ....it’s hard not to find in the not-guilty verdict a painful reminder that the criminal justice system is more likely to treat non-African American defendants more justly than it treats African American defendants.

The question of what the verdict would have been if the races were reversed is an excellent one; however, I think the final conclusion about what action is prescribed by the answer falls victim to emotion at the expense of logic. Not surprising given our history of racism, but still...

Anyone who is honest about the influence that race plays would have to admit that it is much more likely that if Zimmerman were a grown black man and Trayvon a white youth, Zimmerman would have been found guilty of manslaughter--even more likely, if all the jurors were white. In that case, it would be easier for white jurors to ignore the physical facts, testimony and legal instructions and vote their emotions just to ensure someone paid. It would have been easier for a white jury to believe a black Zimmerman had initiated a physical attack and harder to believe that a white Trayvon had. In that case, it is easy to imagine a jury disregarding the requirements regarding burden of proof and turning this burden around to only acquit in the presence of indisputable evidence of innocence.

So where does that leave us? Does it justify vengeance or a form of group punishment to right the sins of the past (and ongoing sins)? Do two wrongs, in certain instances make a right? Is this such an instance?

This case shines a light on an unjust double standard, but forcing a punishment on Zimmerman that is neither justified by the known facts nor the law does nothing to cure the real injustice any more than other instances of revenge have throughout history. George Zimmerman is the itch we want to scratch; however, he is not the underlying malady. Scratch the itch and briefly feel better, but know the rash will return more inflamed than before.

[…] most gripping images captured showed black male protestors who each held a placard that read, ‘I AM A MAN.’ These individual declarations of independence and expressions of personal sovereignty propelled the […]