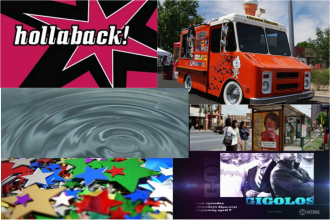 When the media flat-out gets your research wrong or presses it into service in an argument that’s the opposite of what you’ve found, it’s hard to get stoked about taking journalists’ calls. But, as pay walls become costlier and less permeable, I’ve got one key, if difficult, bit of academic advice: start giving away the punchline.

Your abstract is now your calling card. “I present findings, discuss implications, and suggest directions for future research” is not a sufficient closing sentence when you may only have 250 words to say what your paper is about, what makes it special, what it actually means. This is to say, if you’re not clearly giving away information in the one place you can*, it’s your fault if others get it wrong. Of course, they still might use your findings in really dumb ways. No controlling that.

And now, what we’ve been controlling in the past couple of weeks:

“Help SocImages Find a New SocImage!” by Letta Page. In which we try to tap into a broad readership in the hopes that you’ll share ideas and rough sketches for a new SocImages logo.

“Going Big with Online Learning and Teaching,” by Doug Hartmann. In which the Times checks out MOOCs.

“They Like Us! They Really Like Us!” by Doug Hartmann. In which we earn the adjective “award-winning.”

“Lost in Translation,” by Doug Hartmann and Wing Young Huie. In which Wing and Doug consider advertising and stereotypes.

“Ladies in the Red,” by Kia Heise. In which Dwyer, Hodson, and McCloud find even college debt is gendered.

“When a Person Becomes a ‘Health Threat‘,” by Shannon Golden. In which Trevor Hoppe investigates the community health effects of sanctions and stigma.

“March 2013 TSP Media Award for Measured Social Science,” by Carolyn Lubben. In which Graeme Wood gets into corporate anthropology in The Atlantic.

“The Dirty World of Sanitation Work,” by Evan Stewart. In which NYU’s Robin Nagle studies another group of invisible workers: garbage collectors.

“Fieldwork Fouls,” by Andrew Wiebe. In which, dammit. Really? Social scientists and PhD students are getting sexually harassed—by each other—in the field. C’mon, everyone.

“Do Sisters Have to Do It for Themselves?” by Evan Stewart. In which a journalist calls on research from friends-of-TSP to talk about young women’s expectations and priorities around careers and relationships.

“Guilty Pleasures No More?” by Carolyn Lubben. In which titillating TV works on women, too. Oh, and reflects at least someone’s reality. I’ve never watched “Gigolos,” but I feel like it might explain some things.

“Ripple Effects of Incarceration,” by Kia Heise. In which UCLA’s Marie E. Berry shares a teaching exercise to work alongside Megan Comfort’s “Repercussions of Incarceration on Close Relationships.”

“Latino: Race or Ethnicity,” by Kia Heise. In which classrooms can discuss Wendy D. Roth’s “Creating a ‘Latino’ Race.”

A few? In two weeks, the Community Pages cover a constellation of topics through seemingly endless telescopes. The best I can do is offer up a few choice pieces, but by all means, get lost in the brilliance!

“When Election Rules Undermine Democracy,” by Amel Ahmed. “We can’t just get rid of the electoral process, but we can educate each other on the rules of how it functions.”

“The Role of Empathy in Crime, Policing, and Justice,” by Chad Posick. “Unlike the death penalty, restorative justice measures may prevent future crimes while letting the victims and offenders heal.”

“How America’s Tradition of Localism Could Help Gun Control,” by Joseph Blocher. “Under American traditions of local rule, if people in Montana want to shoot elk with rifles, that should not prevent people in Manhattan from trying to keep residents from shooting each other with handguns.”

“The Widening Partisan Gender Gap in the U.S. Congress,” by Karen Beckwith. “When 1992 was dubbed the ‘Year of the Woman,’ the female Congressional presence doubled. But even if that suddenly happened again, women would still constitute only 35% of the House. American voters would still need to elect 64 more women to the House to achieve gender parity.”

*I mean, you could still write stuff for The Society Pages, where we totally give it away. Just a thought. Another thought? German Death Reggae. Ever since they mentioned it on “Parks and Recreation,” I’ve needed to hear it.