A History of American Energy Use

Planet Money’s Jacob Goldstein and Lam Thuy Vo offered some interesting data last week about the history of energy consumption in the U.S.  First they offered data on the rise and fall of alternative energy sources. 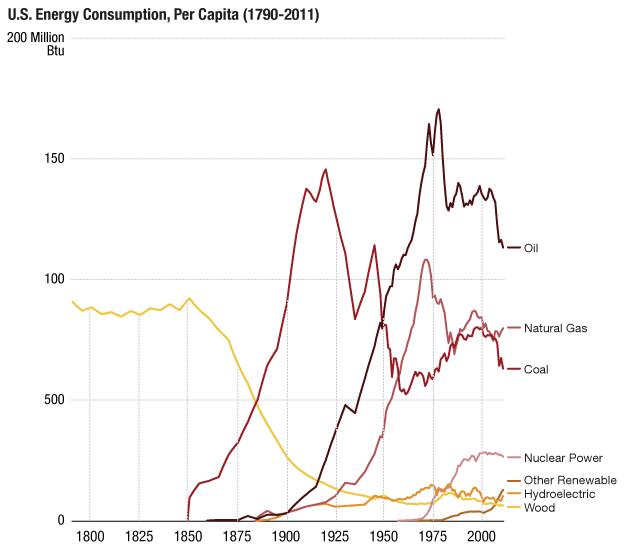 Coal, the first to replace wood, became a common energy source largely thanks to the railroads.  Wood was more or less everywhere, but coal had to be transported.

The invention and spread of the internal combustion engine drove the demand for oil.  According to this site (PM doesn’t say), natural gas becomes common in the ’50s thanks to the improvement of techniques for making metals and welding. This facilitates the building of oil pipelines, hence the rise of oil.

The overall rise in energy consumption per capita is worrisome, but it has fallen off since the mid-70s.  Thanks to high prices that encourage lower use and greater efficiency of appliances, our appetite for energy seems to have leveled off. 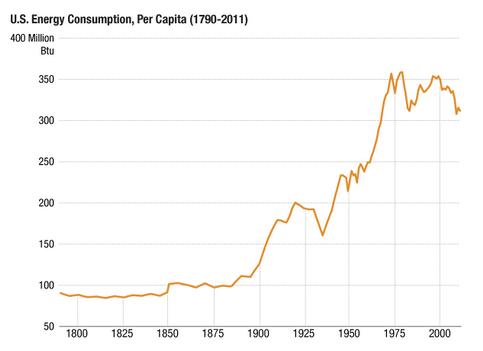 Not to end on an optimistic note, though.  That data is per capita.  Because our population has been rising, our overall energy use has continued to go up. 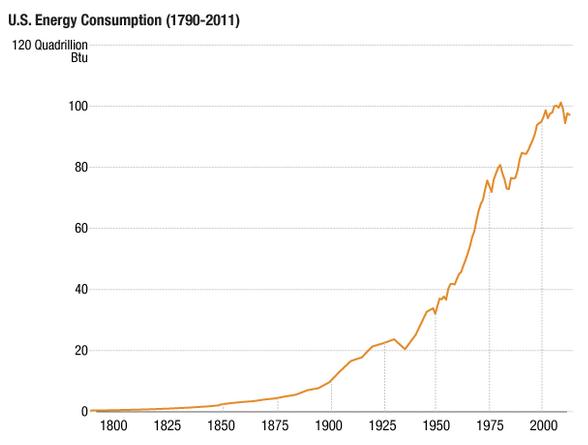 Lower energy consumption is not so much a goal, as something we may regrettably be forced into. I, at least, would consider it to be a milestone worth celebrating when humanity becomes a Type 1 civilization.

I agree with NuclearSubway's comment--not sure why you refer to greater energy use as a negative in itself. It seems to be used as a shorthand for reliance on nonrenewable energy resources or the negative externalities associated with some energy sources. Otherwise very interesting graphs.

Why was the unit of BTU chosen to compare (among other things) hydroelectric and oil? Was it so that the total energy content of fossil fuels could be compared to the electrical power output of hydroelectric? I'm certain that there aren't a significant number of woodburning electrical power plants left in operation, so I assume that the 'wood' includes all wood burned for any purpose (or all firewood harvested/sold, as an easier proxy).

It's worth noting that energy consumption in USA per head looks like it has levelled off or is going down when a lot of manufacturing production has been offshored to other countries. The graph for energy used worldwide for the consumption of US citizens might look quite different. It certainly does for the UK. George Monbiot has recently written on this: http://www.monbiot.com/2013/04/12/the-great-unmentionable/

Environmental, Health and Safety News – A History of American Energy Use via @lisawade #energy — April 27, 2013

Christopher A. Haase » Blog Archive » A History of American Energy Use via @lisawade #energy — May 2, 2013