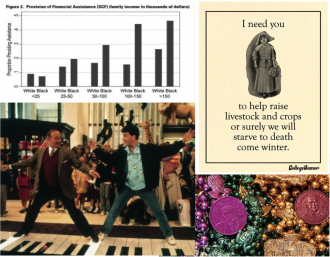 As mentioned over on Public Criminology, things are really coming together on the second of our TSP books for W.W. Norton (the first, The Social Side of Politics, is in production now). This means we’ve been immersed in all kinds of fascinating pieces on trends in and understandings of crime and punishment. Many of the pieces have already come out  (including a new Roundtable on international criminal justice published this week), but we’ve got a lot in the hopper yet. While you await that goodness—and we work furiously to get it produced—why not check out everything else we’ve done this week?

“Growing Up, Twentysomethings and Tenured Professors,” by Doug Hartmann. In which our editor tips his hat to a New Yorker author who sums up emerging adulthood with clarity and brevity. Damn him!

“Excavating the Wealth Gap,” by Erin Hoekstra. In which researching the black-white wealth gap shows it really is dangerous to lend money to friends and family (just not for the reasons we thought).

“Concerns over Canadian Crime,” by Suzy McElrath. In which a year’s rise in homicides raises Canadian concerns, even though overall crime continues to drop like so many hockey pucks.

“January 2013 TSP Media Award for Measured Social Science,” by Letta Page. In which Wired UK takes up research on religious tolerance and media rhetoric with aplomb.

“Real Talk on Immigration,” by Evan Stewart. In which Nancy Foner needs less than 300 words to make recommendations on immigration reform.

“The Invisible Employee,” by Andrew Wiebe. In which a graying society means a graying workforce—but are boomers content to fade away?

“Be All You Can Be,” by Shannon Golden. In which new research finds the military might be a path to higher education, it’s just the path may not be long enough to get all the way to a B.A.

The Winter 2013 issue of Contexts magazine is out now, and we’re happy to be able to share a number of its articles:

“Unmarried Baby Boomers on the Brink of Old Age,” by Susan L. Brown. Between this and the whole graying workforce thing, we’re worried about the boomers. Social Science Debbie Downer strikes again?

“How National Advocates Encourage Conservatism on America’s College Campuses,” by Amy J. Binder and Kate Wood. The Young Republicans aren’t the only game in town (or in the country).