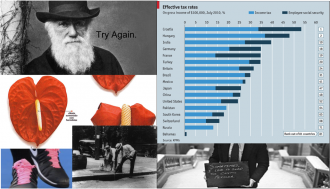 Loyal readers may have noticed the absence of a roundup last week; shuffled schedules led to shuffled writing, and so this week we’ll have a double dose of goodness to share. Please enjoy what the TSP crew has been rustling up in the past couple of weeks.

“Parking Wars, Public Soc, and Professional Thinkers,” by Doug Hartmann. In which a Cyborgology post starts a great discussion on “public sociology.”

“Finding Sociology,” by Doug Hartmann. In which a talk with photographer Wing Young Huie spurs a search for sociology outside academia.

“Bad News for Americans Under 50,” by Hollie Nyseth Brehm. In which… uh-oh! Hide! Move! Yikes.

“School’s Not Out for Summer?” by Letta Page. In which it’s the time, not the timing, that counts when it comes to education.

“Darwin Was Wrong,” by Hollie Nyseth Brehm. In which evolutionary biology butts heads with sociology and psychology. And there’s speed-dating.

“Hold the Check or Hold the Laude,” by Suzy Maves McElrath. In which we learn paying their own way through college might spur students to keep their grades up. Just try not to think about the loan debt.

“Joshua Newman and Michael Giardina on NASCAR Nation,” by Kyle Green. In which Newman and Giardina do their fieldwork from the infield.

“Recession Trends,” by Hollie Nyseth Brehm. In which Brehm explores ways to use a new online tool and a TSP podcast to talk economics and inequality.

“The Strengths and Limits of the Earned Income Tax Credit as a Tool to Fight Poverty,” by Daniel S. Feder. The fiscal cliff deal extended the EITC for five years—will it do anything to fight poverty?

“Should States Create Exchanges to Implement Obamacare?” by David K. Jones. Either the states do it, or the federal government will step in. Jones debates the best strategy.

“How Democrats and Republicans Can Draw Uncommitted Minorities into Politics,” by Zoltan Hajnal and Taeku Lee. Getting a minority-majority population to the polls.